Bubur Cha Cha or “Bubor Cha Cheir” as it is known to some Peranakans, is a dessert soup which comes close to heart for my family. My mum loved it immensely and made it often enough for us to develop a liking for it as well since young. It is a chuchi mulot which she would exercise her creativity in the ingredients to be added depending on the amount of time she had at hand and of course what we loved to eat. Kept minimalistic, it would simply be just a sweet coconut milk broth base with diced kledek (sweet potato) and keladi (taro) cooked in it. More elaborated, an assortment of other “accessories” like bijik sagu kechik (small sago pearls), and legumes like kacang merah (red beans), kacang ijo (green beans) or kacang mata itam (black-eyed peas) can be cooked separated and added. Our favorite condiment must surely be sagu gunting, chewy morsels made from either sago flour or tapioca flour that look like gems sparkling in a pool of ingredients coated with a riot of psychedelic colours. Sometimes fruits will be added, mostly pisang (bananas), occasionally nangka (jackfruit) or even cempedak, and of course whenever it is in season, durian!
END_OF_DOCUMENT_TOKEN_TO_BE_REPLACED 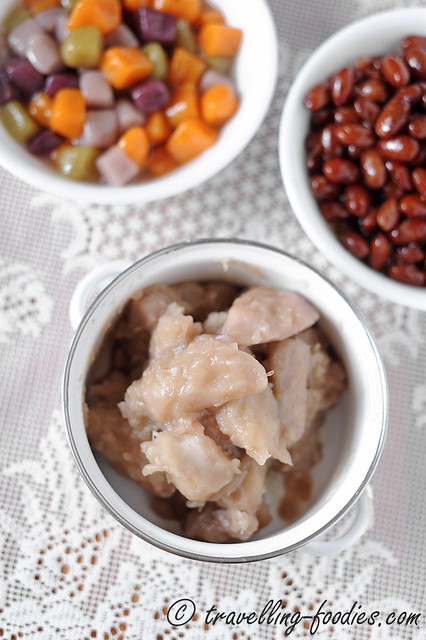