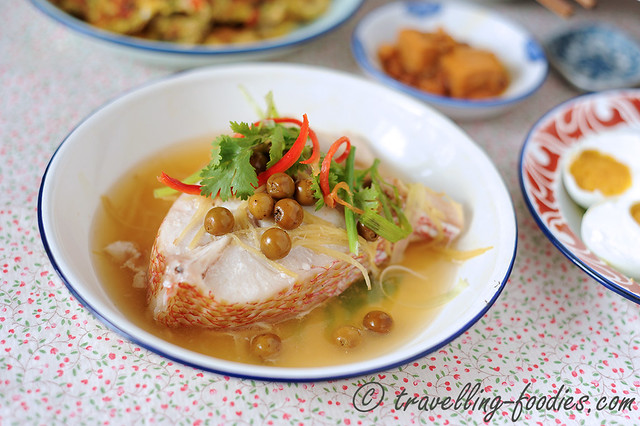 Whenever we visit Taiwan, we love to bring back some of their local delights home. The usual culprits would be their 凤梨酥 pineapple cakes, 咔哩咔哩 twirly rice crackers and more recently organic fruit conserves using local fruits. But we also like to buy back some ingredients and condiments to prepare some dishes which allows us to savour those unique yet familiar flavours. Their 龙眼蜜 longan honey is more superior than those produced in Thailand while their 黑酱油 dark soya sauce is more aromatic than the varieties we get back home. Oh oh oh! And we love their seasonal fruits of course like 玉荷包 lychees and 艾文 mangoes! Quite recently, I was recommended by a friend，SF to try the Taiwanese pickled manjack berries known locally as 树子 shu zi, or more colloquially in Taiwanese dialect as 破布子 po bu zi. I love the Taiwanese 豆腐乳 fermented beancurd cubes so I thought their pickled manjack berries couldn’t taste that bad. And indeed, it was love at first bite!
END_OF_DOCUMENT_TOKEN_TO_BE_REPLACED

An interesting but lesser known trait of Tunku Abdul Rahman, is his passion for food. A true blue foodie of his time, Bapa Malaysia (Father of Malaysia) as he is fondly known as loved cooking as much as he loved eating. Tunku Abdul Rahman’s repertoire of signature dishes which he loves to eat and whip up for his dinner guests is far more extensive than what one would have imagined for a man of his time.  Apart from traditional Northern Malaysian cuisine from Kedah where he was born and raised, he is equally at ease Thai dishes, possibly prepared and taught to him by his Thai mother. His studies at Cambridge University, UK in his younger days also exposed him to traditional British cooking where he learnt his “famous Roast Beef with Yorkshire Pudding”, a weekly staple on the dinner table at home . He is said to have particular fondness for Cantonese dishes as well! So here on Malaysia’s Hari Merdeka (Independence Day). I share with all of you one of the dishes featured in a cookbook compiled and collated by his niece, “Favourite Dishes From The Tunku’s Kitchen“. One of the more interesting recipes I’d read in this cookbook has to be his favorite Otak Otak.
END_OF_DOCUMENT_TOKEN_TO_BE_REPLACED