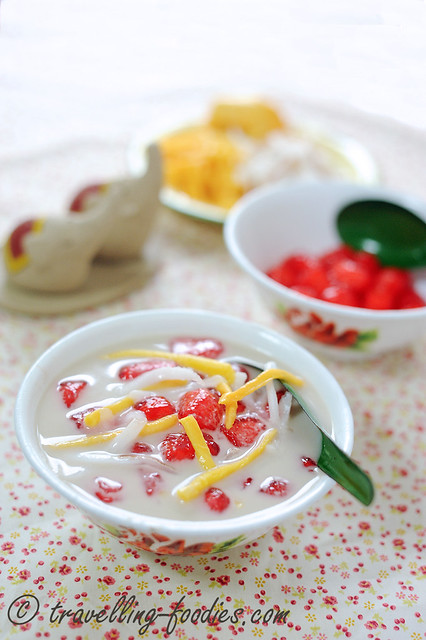 It seems like every Asian culture has their own popular sweet cold desserts which are synonymously known or associated with the cuisine. In Malaysia and Singapore, it has to be Ais Kacang and Cendol while in Hong Kong, it is 杨枝甘露 etc. Mention Thai desserts and one refreshing, yummy, not to mention visually stunning piece immediately comes to mind. Yes, it is Tub Tim Grob aka Red Rubies in Coconut Milk here.

END_OF_DOCUMENT_TOKEN_TO_BE_REPLACED

Almost 10 years ago, there was a series of TV programmes featuring Peranakan culture and cuisine. Most memorable were “The Ways of the Matriarch”, “The Cook, His Food and the Dishy Nyonyas” as well as “On the Trail of the Phoenix”. It is the last after which the Peranakan dishes presented in this blog were named as It was through these TV programmes that I’d learnt much about the intricacies of Straits Chinese cuisine and its preparation. One of the most impressionable dishes being showcased was Apom Berkuah, I remembered vividly the contrasting swirls of blue from juice extracted from bunga telang against the ivory colored fluffy rice cakes. After all these years, I’d finally gotten a chance to make them myself. Truly sedap!
END_OF_DOCUMENT_TOKEN_TO_BE_REPLACED