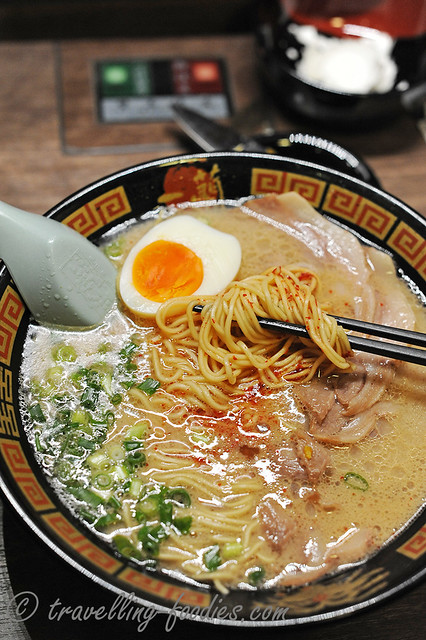 For those who love Japanese ramen, 一蘭 Ichiran Tonkotsu Ramen should not sound unfamiliar. Hailing from 博多 Hakata, Fukuoka, they are one of the the first to popularise this stye of ramen from the south characterised by a rich and creamy bone broth with branches all over Japan.  It is not only their ramen itself that makes them unique but also the way of ordering ramen, and also the sheer experience of dining in an Ichiran ramen outlet itself that makes things interesting…
END_OF_DOCUMENT_TOKEN_TO_BE_REPLACED

END_OF_DOCUMENT_TOKEN_TO_BE_REPLACED

When we were in Kyoto, we were intrigued by the variety of traditional Japanese snacks available in just one shop alone which we’d visited. It is a 老舗 shinise, which means that it has been around for a very long time, and the selection was far more extensive than what we would probably find in all the snack shops we’d seen elsewhere combined. Senbei and other forms of rice biscuits in all thinkable Japanese-inspired flavours from the savory sansho and sakura-ebi to sweet ones like kurogoma and matcha. But this comes as no surprise of course. Kyoto is the old capital of Japan for more than 1000 years. Many of these snacks have their roots deep in the art of 和菓子 wagashi, the traditional artform of Japanese sweet-making. But some of these are classified as 南蛮菓子 nanban-gashi, brought into Japan by the Spanish and Portuguese missionaries more than 500 years ago. The most famous of these “imported confectioneries” must surely be the カステラケーキ kasutera cake which was derived from the Portuguese “Pão de Castela”. It has since become a speciality of Nagasaki. Another lesser known confection which is essentially a nanban-gashi as well, is a cookie known as そばぼうろ Soba Boro, These have since become a popular snack which is synonymously associated to Kyoto, where visitors would buy packets of them home as omiyage. But the recipe is fairly straightforward, so now you can make them on your own as well!
END_OF_DOCUMENT_TOKEN_TO_BE_REPLACED