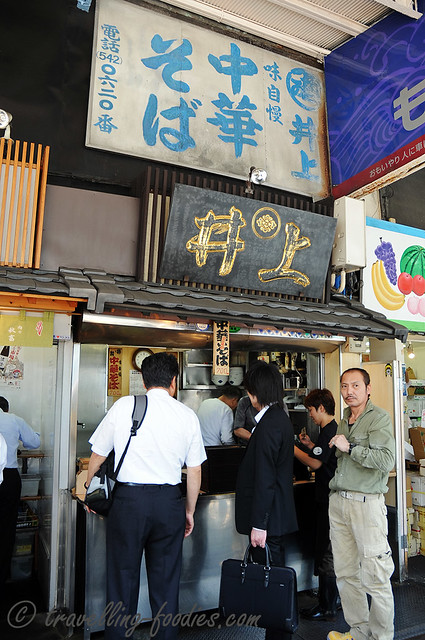 One of the places we always make it a point to visit  whenever we are in Tokyo is Tsukiji Market located at the south-eastern corner of the metropolis not too far away from Ginza. Unlike other tourist sites, Tsukiji is worth visiting over and over again from time to time. It boasts to have the freshest seafood one would be able to find anywhere and it garners the best produce from all over Japan which changes with the seasons. There is always so much to see, smell, taste and of course buy. Despite our numerous trips to Tsukiji, we’d never gotten to try much of the stuff from the cooked food stalls there. Yes we’d done the “touristic thing” and ate kaisendon at some of the small sushi delis which can be found all over the place, but we’d never gotten round to try much of the other stuff there. So for our most recent trip, we’d made it a point to have a bowl the local ramen, and have a taste of what the locals eat. One name that comes to mind would naturally be 井上中華そば Inoue Chukka Ramen.
END_OF_DOCUMENT_TOKEN_TO_BE_REPLACED

My first walk-in dining experience for Japanese food was probably about 15 years ago. I was in national service then and there is “food court” located a stone’s throw away from my army camp. During the days when I had to stay up late in camp, my colleagues and I would drop by the food court for dinner. There was a small Japanese food deli within the food court and it was there, that I had my first donburi. Katsudon, oyakodon and gyudon are the usual culprits, and occasionally unadon when I was in the mood for something better. It was a time when sushi on conveyor belts had just landed in Singapore and the concept of Japanese food then was very new to most of us. The slurry-like half-cooked egg that robed the donburis, the melange of both sweet and savory flavours in teriyaki sauce were all very alien to me.  And then I encountered agedashi tofu. Tofu we eat a lot since young but to have it deep fried and then drenched with a broth, the textures were pretty interesting to start with!
END_OF_DOCUMENT_TOKEN_TO_BE_REPLACED

The food culture in Tokyo was also quite intriguing. We are accustomed to buying canned drinks and occasionally packets of snacks or snicker bars from vending machines over here. Yet in Japan, practically everything, from a fresh organically grown apple, to a hentai soiled panty could be peddled in vending machines! More commonly, vending machines in Tokyo serve a greater purpose. One could order a meal through vending machines placed outside an F&B establishment, and customise everything in accordance to one’s preference from adding of toppings on a ramen, ordering an additional side dish, to upgrading a miso jiru to a ton jiru that goes with the 牛丼 Gyudon. This saves the hassle of the already busy shop staff who could now concentrate on handling the food and not the money!
END_OF_DOCUMENT_TOKEN_TO_BE_REPLACED

Ask me what I deem to be the most delicious in this world which I cannot stop eating, I probably can’t give you a definite answer. So many foods would come spinning in my head like sevens on a pachinko machine. Über fresh sea urchin roe sashimi (uni) over a bowl of piping hot Japanese short-grain rice, perfectly braised pork belly sandwiched in crisp salad greens, timely cooked Kacchi chicken biryani, freshly baked ciabatta with a simple pesto dip and aged balsamic vinegar, otah otah from just fresh mackerel and coconut milk, chilled pengat durian… and the list runs on and on. Ask me again on what I find to be the most delicious dish which can be whipped up in just minutes and the list narrows down quite easily to just one candidate emerging victorious and somewhat vindictive. It has to be 明太子パスタ Mentaiko Pasta!