How time flies and we are into the last quarter of the year already. Mid-Autumn Festival was just over a week back  and I’m glad to have finally found time to make some mooncakes this year after a long hiatus for a couple of years. Thankfully this year’s mooncakes turned out alright. As I’d mentioned before in my old blog post 4 years back, I’d always looked forward to the Mid-Autumn Festival because it was always a time for family to come together and enjoy a meal. Pomelo are my favorites from this festival’s delectables, more so than mooncakes! I bought 3 large pomelos before the festival for a song and they are still sitting quietly, waiting to be pried open. And for me, there is no better way to enjoy pomelo than in the classic dessert,  楊枝甘露 Mango Pomelo Sago. END_OF_DOCUMENT_TOKEN_TO_BE_REPLACED 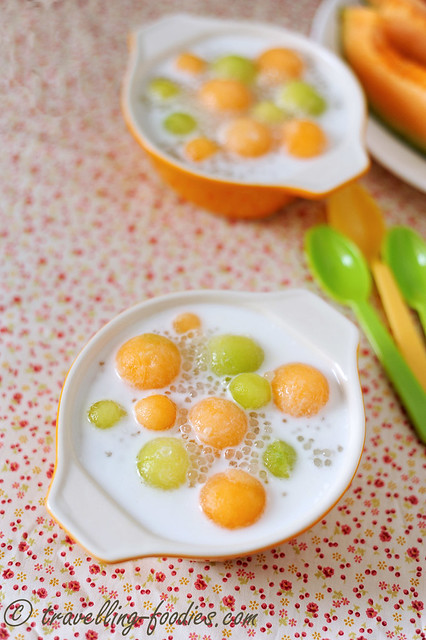 The heat for the past two weeks have been excruciatingly unbearable, and it most certainly doesn’t help to know that the haze is back!!! I’m down with a sore throat and some of my students are suffering from hacking coughs. Not helpful at all neighbour. Please ask your farmers to stop the burning! Mid-summer blues under the scorching weather makes one all sluggish and lethargic, not wanting to do anything except to stone in an air-con room. To make myself feel better, I’m thinking of some sugary and cooling “tong shuei” to help beat the heat. Well, I could cook a sweet 六味汤 luk mei tong or double boil some 南北杏木瓜炖雪耳 White Jelly Fungus with Papaya, or simply reprise my favorite 楊枝甘露 Mango Pomelo Sago desserts, but I’m thinking of something even simpler for instant relief. Happen to chance upon some melons at our local supermarkets just last weekend and lugged home some since they are so affordable now that they are in season. A good time to revisit one of my childhood favorites which I hadn’t eaten in eons, 蜜瓜西米露 Honeydew Melon Sago.
END_OF_DOCUMENT_TOKEN_TO_BE_REPLACED

Bubur Cha Cha or “Bubor Cha Cheir” as it is known to some Peranakans, is a dessert soup which comes close to heart for my family. My mum loved it immensely and made it often enough for us to develop a liking for it as well since young. It is a chuchi mulot which she would exercise her creativity in the ingredients to be added depending on the amount of time she had at hand and of course what we loved to eat. Kept minimalistic, it would simply be just a sweet coconut milk broth base with diced kledek (sweet potato) and keladi (taro) cooked in it. More elaborated, an assortment of other “accessories” like bijik sagu kechik (small sago pearls), and legumes like kacang merah (red beans), kacang ijo (green beans) or kacang mata itam (black-eyed peas) can be cooked separated and added. Our favorite condiment must surely be sagu gunting, chewy morsels made from either sago flour or tapioca flour that look like gems sparkling in a pool of ingredients coated with a riot of psychedelic colours. Sometimes fruits will be added, mostly pisang (bananas), occasionally nangka (jackfruit) or even cempedak, and of course whenever it is in season, durian!
END_OF_DOCUMENT_TOKEN_TO_BE_REPLACED

I’ve always looked forward to the Mid-Autumn Festival not because I’m interested in eating or making mooncakes of course, but because pomelos are also in season. For me they are a real treat during this time of the year. When I was young I’d had a somewhat peculiar way of eating pomelo, plucking the pearly pulp individually from the membrane and squash them one at a time  in my mouth. That sudden burst of those sourish packets of juices remains one of the highlights of festivities celebrations in my childhood, because that was traditionally the only time of the year pomelos were available.

I still enjoy pomelo by the pulp, even till today, especially when its paired with another fruit in season, thai honey mangoes to create a very famous dessert, Mango Pomelo Sago, or better as Yeung Zhee Gam Luk 楊枝甘露, a name that alludes so much poetry.
END_OF_DOCUMENT_TOKEN_TO_BE_REPLACED