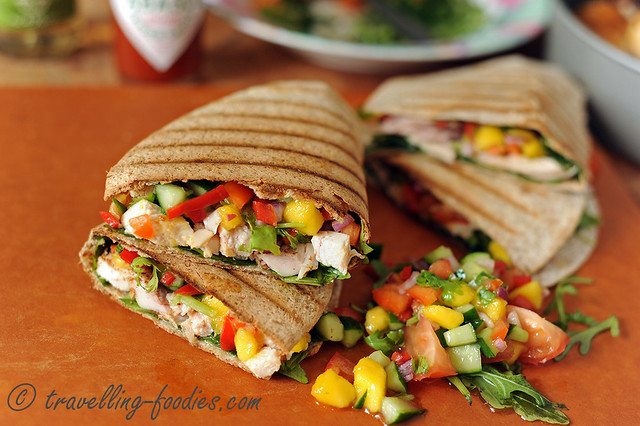 I bought a roast chicken from the takeaway food counter at one of our local supermarkets on last Saturday and conveniently forgotten about it until yesterday. It’s not the first time and I’m sure it wouldn’t be the last either. Many ingredients are left only to be rediscovered later. Some have been tugged away in some dark corner for so long that awaits excavation! After sitting in the fridge for 3 days, the roast chicken had already gone passed its prime. Thankfully it was very well sealed in a bag all this while and the chicken stayed still rather succulent. The best way to use it? Tonnes of ways to go about that… eat with Chinese egg noodles alongside a home concocted sauce, shredding the meat and enjoy it with Chinese porridge any style be it Teochew or Cantonese, or simply chunk and toss into a salad. I happen to have a bag of tortillas which I bought with some friends when we went to Mustafa last Friday. Roast Chicken in a Tortilla Wrap sounds real good, especially when it comes with a homemade Mango Salsa!
END_OF_DOCUMENT_TOKEN_TO_BE_REPLACED

How time flies and we are into the last quarter of the year already. Mid-Autumn Festival was just over a week back  and I’m glad to have finally found time to make some mooncakes this year after a long hiatus for a couple of years. Thankfully this year’s mooncakes turned out alright. As I’d mentioned before in my old blog post 4 years back, I’d always looked forward to the Mid-Autumn Festival because it was always a time for family to come together and enjoy a meal. Pomelo are my favorites from this festival’s delectables, more so than mooncakes! I bought 3 large pomelos before the festival for a song and they are still sitting quietly, waiting to be pried open. And for me, there is no better way to enjoy pomelo than in the classic dessert,  楊枝甘露 Mango Pomelo Sago. END_OF_DOCUMENT_TOKEN_TO_BE_REPLACED

My story with the mango and passionfruit pairing started back in 2011, when I first made Hidemi Sugino‘s “Tahiti タヒチ – Tarlette au Mangue et Fruit de la Passion“. It was a beautiful creation which I hope to make again some time soon in the near future. Hopefully when miyazaki mangoes become more affordable(I wish!), or when I have access to the cheaper Taiwan grown variety. Then in 2012, triggered by the Diner en Blanc saga (read about it here), El Tropicano was born, a plated dessert comprising of a soya bean panna cotta and a fruits tartare with mango and passionfruit as the main components. It was made somewhat tongue-in-cheek and in a slightly spiteful manner if I might add, now thinking in retrospect but all in good fun. Then in 2014, I opted for something simpler, and made a Mango and Passionfruit Yoghurt Pudding which was simple but no less yummy. Needless to say, the matrimony of these two much loved tropical fruits is high on my favorites’ list. And now 2015, I’d cracked my head again, this time for a cheesecake-based entremet, named “Tahiti v.2015” after Sugino’s creation which got me all started.
END_OF_DOCUMENT_TOKEN_TO_BE_REPLACED 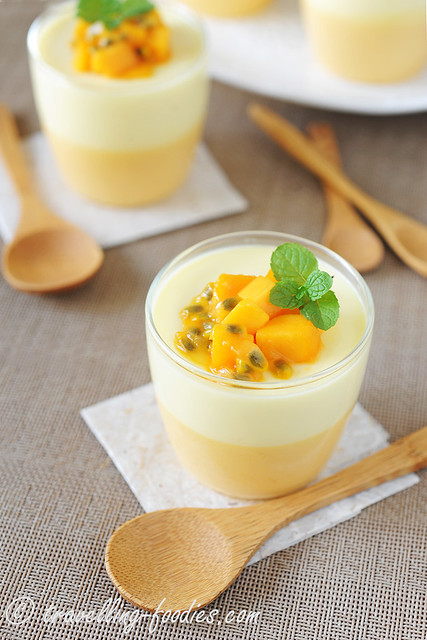 Summer is definitely in full swing now with the heat. Nothing better to beat the heat wave with a refreshing and cooling dessert. Couple of years back, I’d made renowned Japanese patissier Hidemi Sugino’s “Tartlette au Mangue at Fruit de la Passion” which he named “Tahiti タヒチ” and the flavours remain vivid in my mind. Mango and passionfruit are a match made in heaven afterall. It inspired me to create a chilled dessert which marries these two delicious tropical fruits, my Mango and Passionfruit Yoghurt Pudding.
END_OF_DOCUMENT_TOKEN_TO_BE_REPLACED

END_OF_DOCUMENT_TOKEN_TO_BE_REPLACED

Like ルージュ Rouge, this is a plated dessert which I’d created in conjunction of EAT AND MAKE TAU HUAY DAY. Rouge was concocted out of my love for fruits aux rouges. I love berries of all sorts, wholeheartedly worshipping the intricacies that could be teased out of these little parcels bursting with flavour! El Tropicano is inspired by the fruits de la saison we were enjoying at that moment in time. The use of mango and passionfruit together with lemon balm mint is heavily inspired by Hidemi Sugino’s tartelette “Tahiti タヒチ” which I’d made a year back and fell in love ever since. But of course, there were Ai Wen Mangoes then! likewise, I’d used lemon balm for the outburst of refreshing citrusy aroma. Added additional dimension of using pineapple since we had some S&W Sweet 16 pineapples from the Phillippines! It would be really lovely to add a coconuty twist in it but everything was made in a rush, pieced together on a last minute basis. So pina colada would have to wait until another time!

END_OF_DOCUMENT_TOKEN_TO_BE_REPLACED

Diner en Blanc‘s first appearance in Asia ended with a blast, owing to the much reported local-food-bloggers-uninvited-and-local-food-disallowed saga. The whole fiasco went completely viral and took a life of its own to bring about much talk, as well as publicity on it over the last week or so. Extensive coverage all over social media through Facebook, as well as various high profile blogs like Mr Brown and ieatishootipost. There was a lot of discussion over Diner en Blanc’s initial reaction to local delights like tau huay and soon kueh, rousing much sentiments, mostly deeming the event as snotty, poncy and pretentious. It went all high drama when the PR company in-charge of the event went on to “disengage themselves” just barely before the day of the event itself, citing a “misalignment of perspectives” with the local organisers. Some bloggers decided to play devil’s advocate and questioned the blogger in question‘s share of responsibility leading to the whole social media fiasco.  On the whole, it received a lot of media coverage, IMO a lot more than what it should and normally would, both locally and abroad, with “no-so-honorable mentions” from WSJ and AFP. The whole saga was meant to be called to a halt with a coverage on ieatishootipost’s lunch interview with DeB’s founders as well as an official statement addressed “Dear Singapore” on DeB Singapore’s website. Well that was after its facebook page was taken down amidst the outpour of criticisms and mobbing by local netizens. So has the saga really ended? Meanwhile, the DnB fiasco also sparked off several other events which were “coincidentally” scheduled on 30 Aug 2012, when Diner en Blanc was slated to commence in a “secret location” which turned out to the ArtScience Museum at Marina Bay Sands. Who would have guessed… Anyway, spin offs like SuperWhite, Makan Day took place alongside Diner en Blanc, and so did our MAKE AND EAT TAU HUAY DAY!