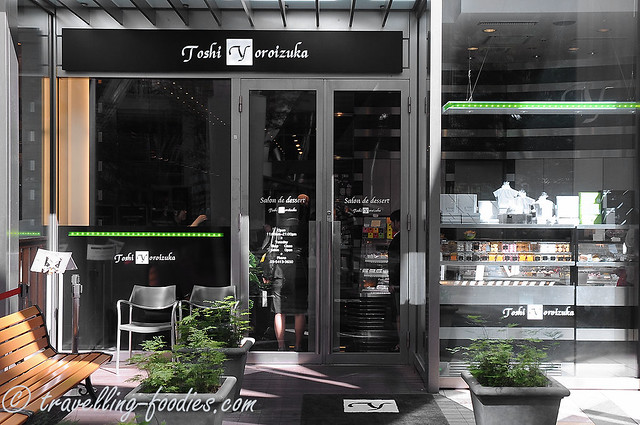 It seems like a growing trend, that people are no longer satisfied with “just” being able to savour the desserts and pastries off their plates, but they’d also like to see how the desserts are being prepared right before their eyes. I see this as an extension of gastronomic experience which probably first stemmed from stepping into a sushi bar where a Jiro-like Japanese chef puts on a performance of, selecting a suitable cut, slicing the fish to precision, grasping the perfectly flavoured sushi rice so elegantly in one hand before clasping the two components together. It is a performance which many believe can invigorate the senses during the “omakase” as well as help one to gain a deeper understanding of the food in order to better appreciate what is being eaten. Such a dramatic show is a tradition is not unique to just Japanese of course, as a good crepe suzuette is often prepared from scratch right next one’s dining table, from the making of the lace-thin pancakes, to the final flambe of the orange juice and liqueur concoction. As such, “salons” or “ateliers” becomes an increasingly popular culinary concept which is replicated in many places now. During our most recent trip to Japan, we visited Salon de Dessert Toshi Yoroizuka in Tokyo Midtown , for a treat of not only their desserts but also the performance.
END_OF_DOCUMENT_TOKEN_TO_BE_REPLACED 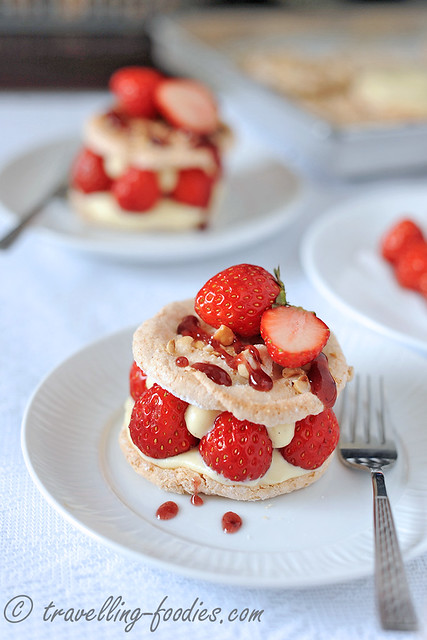 END_OF_DOCUMENT_TOKEN_TO_BE_REPLACED

When we were in Kyoto, we were intrigued by the variety of traditional Japanese snacks available in just one shop alone which we’d visited. It is a 老舗 shinise, which means that it has been around for a very long time, and the selection was far more extensive than what we would probably find in all the snack shops we’d seen elsewhere combined. Senbei and other forms of rice biscuits in all thinkable Japanese-inspired flavours from the savory sansho and sakura-ebi to sweet ones like kurogoma and matcha. But this comes as no surprise of course. Kyoto is the old capital of Japan for more than 1000 years. Many of these snacks have their roots deep in the art of 和菓子 wagashi, the traditional artform of Japanese sweet-making. But some of these are classified as 南蛮菓子 nanban-gashi, brought into Japan by the Spanish and Portuguese missionaries more than 500 years ago. The most famous of these “imported confectioneries” must surely be the カステラケーキ kasutera cake which was derived from the Portuguese “Pão de Castela”. It has since become a speciality of Nagasaki. Another lesser known confection which is essentially a nanban-gashi as well, is a cookie known as そばぼうろ Soba Boro, These have since become a popular snack which is synonymously associated to Kyoto, where visitors would buy packets of them home as omiyage. But the recipe is fairly straightforward, so now you can make them on your own as well!
END_OF_DOCUMENT_TOKEN_TO_BE_REPLACED

大根のそぼろに Daikon no Soboroni, like 肉じゃが Nikujaga , is another signature dish in Japanese home-styled cooking. Ironically like many such dishes, Daikon no soboroni is unfamiliar to many who are accustomed to relating Japanese cuisine to the dishes which are available in Japanese restaurants and delis, not places where one would readily find dishes of the Japanese home, especially in Singapore. But I love these dishes for their simplicity in technique, yet so full of おふくろの味 “flavours of the home”, just what one needs to warm the stomach and the heart after being so tired of eating out. It is extremely easy to prepare and takes very little time to do so.
END_OF_DOCUMENT_TOKEN_TO_BE_REPLACED

I love 桜餅 sakuramochi and eat them whenever I could find them or find time to make them. And it has mostly been the Kansai version where 道明寺粉 domyoji-ko is used.  I love love love glutinous rice and enjoy practically everything that comes with it. So I always have a stash of domyoji-ko and pickled sakura leaves at home so that I can make them whenever a craving sets in. Oddly, I’d not made the Kanto version before despite enjoying them several times in Japan. So I guess its a good time to try!
END_OF_DOCUMENT_TOKEN_TO_BE_REPLACED

The art of  和菓子 Wagashi making is one of the finer elements of Japanese culinary culture and for me, it is the epitome of its levels of exquisiteness and artistry of its gastronomic heritage. Most wagashi used a grain-based starch as the main ingredient, usually glutinous rice or Japanese short-grained rice, but 蕨餅 Warabimochi is an interesting form of Wagashi using starch extracted from the roots and lower stems of the bracken fern instead. It is an extremely popular snack in the Kansai region and I remember first tasting it as part of the dessert served with a Kyoto-styled Tofu meal when we were in Osaka 2 years back. The texture was unique, somewhat chewy with quite a bit of bite  yet soft and delicate at the same time. So it is quite difficult to describe but remains memorable until today.
END_OF_DOCUMENT_TOKEN_TO_BE_REPLACED

The food culture in Tokyo was also quite intriguing. We are accustomed to buying canned drinks and occasionally packets of snacks or snicker bars from vending machines over here. Yet in Japan, practically everything, from a fresh organically grown apple, to a hentai soiled panty could be peddled in vending machines! More commonly, vending machines in Tokyo serve a greater purpose. One could order a meal through vending machines placed outside an F&B establishment, and customise everything in accordance to one’s preference from adding of toppings on a ramen, ordering an additional side dish, to upgrading a miso jiru to a ton jiru that goes with the 牛丼 Gyudon. This saves the hassle of the already busy shop staff who could now concentrate on handling the food and not the money!
END_OF_DOCUMENT_TOKEN_TO_BE_REPLACED