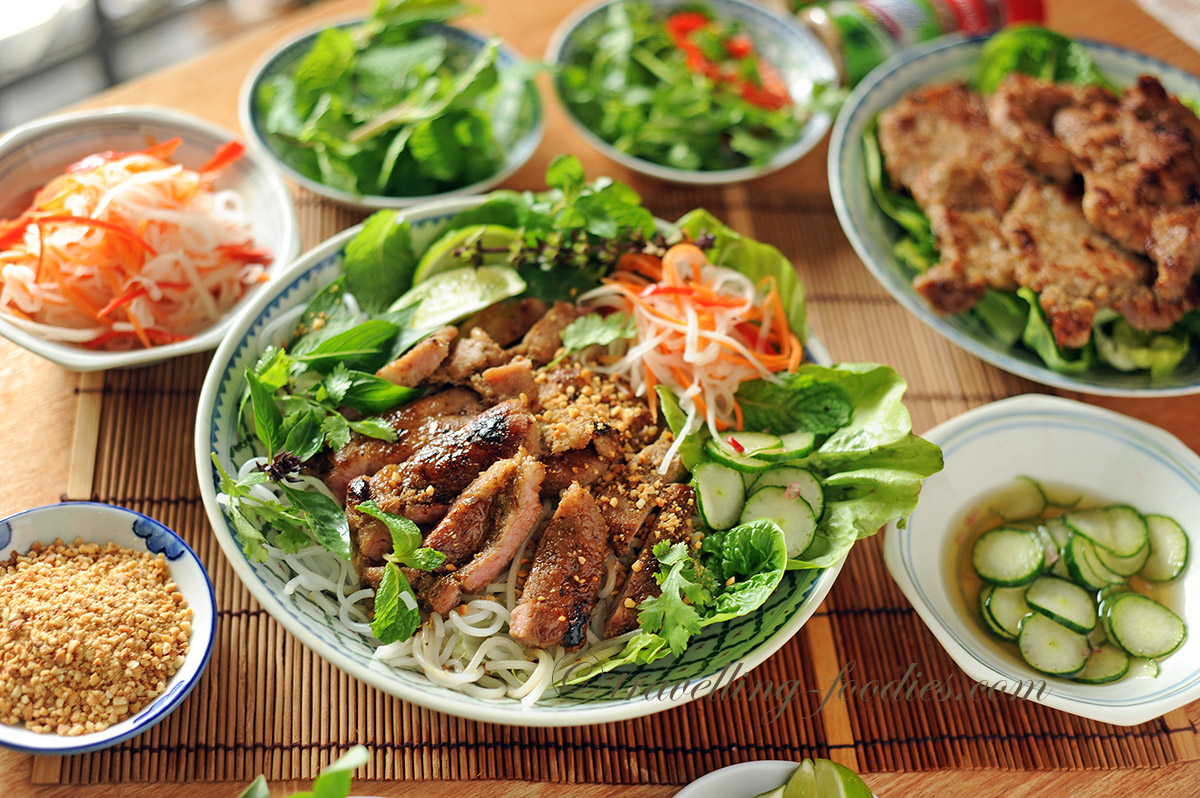 I am gonna be brutally honest here. I am not at all that familiar with Indochinese cuisines. Despite being in the big ASEAN family, Laotian, Cambodian and Vietnamese dishes still largely fall within the “exotics” category for my palate. Hardly an excuse really, given the proximity but fact is I do not eat these foods as often as I could or should, despite there being quite a few good Vietnamese eateries around Singapore, especially in my all-too-familiar Joo Chiat area just a stone’s throw away from my favorite wet market at Geylang Serai. I love Pho Bo and have an affinity for Bahn Mi and Bahn Xeo but apart from these two dishes, my next to-go-to Vietnamese dish to order whenever I am dining in a local viet deli would be Thit Heo Nuong Xa Vietnamese Grilled Lemongrass Pork Chops with Rice Noodles. Love the smokey and lightly charred aromas of the grilled pork chops against the assortment of crunchy and refreshing greens. And here’s my take of this popular yet healthy dish.  END_OF_DOCUMENT_TOKEN_TO_BE_REPLACED

Protocol and formalities once perpetuated every aspect of the ways of life of a Peranakan, even in its cuisine. Some dishes were cooked specifically for certain occasions and having them appear on the dining table otherwise was a big no no. For example, “pongteh” was a dish prepared for semayang abu (ancestral prayers) and not to be confused with “chin“, a very similar dish which was associated with weddings instead. The same was with the “kueh culture” for the Peranakans, colour coded to highest levels of specifications, red and yellow for festivities while green and blue were for funerals. But over the years as the generations evolved, many converted to Catholicism or “masok Christian” and abandoned these practices, while for others the “reins” faded and eventually disappeared as they became more influenced by Western culture, married out of the baba-nyonya community or simply migrated to a part of the world where Asian culture isn’t a mainstream, let alone the Peranakan way of life. As such many aspects of the “adat” and its “rules” became relaxed, with only a handful of puristic Peranakans still stauchly following the very traditional customs to the strictest order and in full regalia. Thus, it is not uncommon, to find dishes which were previously cooked for separate occasions appearing on the same dining table nowadays. The identity of certain dishes also evolved over time, and one of them is Nyonya Mah Mee, which is sometimes just called Mee Nyonya.
END_OF_DOCUMENT_TOKEN_TO_BE_REPLACED

As I’d mentioned on several occasions on this blog, Penang Peranakan cuisine differs quite significantly from their southern counterparts in Malacca and Singapore. The babas and nyonyas from the island state near the northern end of the peninsula has their own menu of dishes which are unique to their own culture. Perut Ikan, Inche Kabin, Jiu Hu Char and Kari Kapitan are just some examples.  The art of kerabu making, inherited from Thai cuisine plays a significant part of the culinary repertoire of the Penang Peranakans. Kerabu Kacang Botol, Kerabu Hai Tay, Kerabu Bok Hnee are amongst my favorites. They are refreshing sides which can be served along with more hearty dishes, or good with just some ikan goreng and sambal belacan as part a simple meal. Speaking of simple meals,  there is even Kerabu Beehoon which is perfect as one-dish meal on its own!
END_OF_DOCUMENT_TOKEN_TO_BE_REPLACED

END_OF_DOCUMENT_TOKEN_TO_BE_REPLACED

The last installment of Malaysia Food Fest (MFF) brings us to Perak and it is just in time for Eid al-Fitr. After a long month of Ramadan, it is time for our Muslim friends to break fast and celebrate during what is more commonly known as “Hari Raya Puasa” over here in Malaysia and Singapore. One of the absolute must-haves for Hari Raya celebration is a spicy beef stew which originated from Indonesia called “Rendang“. I’d cooked Rendang Daging Rembau earlier this year for Negeri Sembilan but rendang cooking has a long withstanding tradition in Malaysia and has since evolved and developed so many varieties, with almost every state having their own unique variation. So it comes as no surprise that Perak too has its own “special” rendang and rightfully so as it is very famous, enjoyed by not only the Perakians but also visitors to the state. “Rendang Tok” as it is known, with “Tok” to mean royalty, this delicious rendang is literally food befitting the kings!
END_OF_DOCUMENT_TOKEN_TO_BE_REPLACED

END_OF_DOCUMENT_TOKEN_TO_BE_REPLACED

I bought quite a number of packets of these coral seaweed last year at a food fair. Touted as “sea bird’s nest“, these wobbly translucent branches immediately caught the attention of many ladies, thanks to the high content of carrageenan, which has textural properties likening collagen. Well, truth be told, it isn’t the real deal as collagen is found only in animals, specifically vertebrates. But its pretty yummy and I’m sure being a seaweed, it has many beneficial qualities as well!

END_OF_DOCUMENT_TOKEN_TO_BE_REPLACED

This month’s MFF brings us to Sabah, the Land Below the Wind. Admittedly, I do not know anything about Sabah nor its culinary heritage. So I guess its going to be a month of “copycating” around. While searching for over the internet for interesting Sabahan dishes to prepare, I came across Hinava, a raw fish salad made with few other items, and mostly readily available at hand. It seems that simplicity in ingredients and technique is an ideology perpetuated in Sabahan cuisine. While some may dub it as being primitive and unsophisticated, I choose to think that the minimalistic approach actually maximises the experience of the true flavours of each ingredient. Less is more.
END_OF_DOCUMENT_TOKEN_TO_BE_REPLACED