END_OF_DOCUMENT_TOKEN_TO_BE_REPLACED

Protocol and formalities once perpetuated every aspect of the ways of life of a Peranakan, even in its cuisine. Some dishes were cooked specifically for certain occasions and having them appear on the dining table otherwise was a big no no. For example, “pongteh” was a dish prepared for semayang abu (ancestral prayers) and not to be confused with “chin“, a very similar dish which was associated with weddings instead. The same was with the “kueh culture” for the Peranakans, colour coded to highest levels of specifications, red and yellow for festivities while green and blue were for funerals. But over the years as the generations evolved, many converted to Catholicism or “masok Christian” and abandoned these practices, while for others the “reins” faded and eventually disappeared as they became more influenced by Western culture, married out of the baba-nyonya community or simply migrated to a part of the world where Asian culture isn’t a mainstream, let alone the Peranakan way of life. As such many aspects of the “adat” and its “rules” became relaxed, with only a handful of puristic Peranakans still stauchly following the very traditional customs to the strictest order and in full regalia. Thus, it is not uncommon, to find dishes which were previously cooked for separate occasions appearing on the same dining table nowadays. The identity of certain dishes also evolved over time, and one of them is Nyonya Mah Mee, which is sometimes just called Mee Nyonya.
END_OF_DOCUMENT_TOKEN_TO_BE_REPLACED 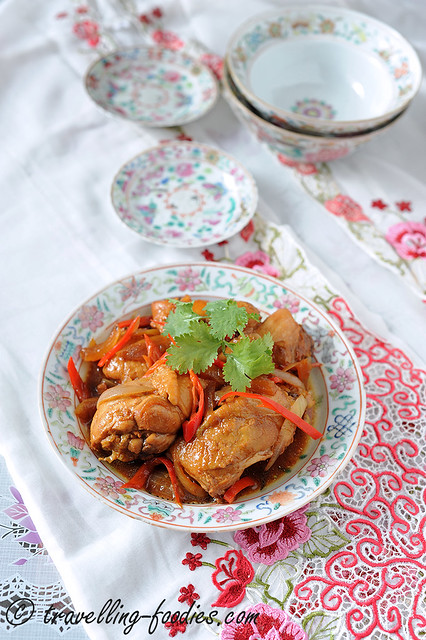 END_OF_DOCUMENT_TOKEN_TO_BE_REPLACED

We cook asam fish all the time at home. In fact, whenever the belimbing trees are laden with fruits, those few days are asam fish days. For us at home, Ikan Gerang Asam is the default way of cooking asam fish. But of course there are geographical variations to how asam fish is cooked.  Ikan Gerang Asam, the Melakan peranakan of preparation depends heavily on the use of daun limau purut (kaffir lime leaves) amidst other fresh ingredients like lengkwas (galangal ginger) to work up the aromatics! And that most certainly helped to work up an appetite! When I was preparing Laksa Belut Perlis, the famous eel laksa from the most northern Malaysian state in the Peninsula, all the rempah (blended ingredients) were basically boiled together with the broth base without any sautéing. But yet, it was still very delicious. And this month’s MFF brings me down all the way to the far south, to the bordering state of Johor for Ikan Pari Asam Pedas.
END_OF_DOCUMENT_TOKEN_TO_BE_REPLACED