I used to live along Upper Serangoon Road near the old Lim Tua Tow Market where there was lots of good and cheap hawker food around. Those were the days when our area were the only HDB blocks around and the vicinity was just nothing but a Teochew cemetery. Serangoon Central came later and NEX Shopping Mall didn’t even appear until 20 years had passed. The crocodile farm was still around and Upper Serangoon Shopping Centre was not a ghost town like today. Down my old block there used to be quite a good wanton mee stall, operated single-handedly by a middle-aged lady whom we refer to as the “wanton mee auntie”. Our favorites were her 鳳爪麵 “fung zau meen” with succulently braised chicken feet, that my mother forbade us from enjoying as it was believed that eating chicken feet during one’s pre-pubescent years can result in trembling hands and thus ugly handwriting.  We ate nonetheless, secretly buying from the “wanton mee auntie” of course, telling her they were for my mum! So yummy! How to resist!? For us, wanton mee auntie’s 鮮蝦水餃 sin har shuei gau was something special as well. It was a time when 1.50 can get you a bowl of springy egg noodles in yummy soup along with three plump shuei gau and an additional 50 cents can get you two more. Long gone are the days of cheap and affordable hawker food of course, and long gone are the days of authentically cooked hawker food as well…
END_OF_DOCUMENT_TOKEN_TO_BE_REPLACED

For our recent trip, we stayed at a hotel which offered breakfast, serving croissants, scones and my favorite fruit conserves, which we have no reason to refuse. So our dimsum breakfast plans in our itinerary were conveniently shelved. But fate has it that we should be in the Mongkok area when it suddenly poured. Determined not to be deterred by the wet weather, we opted for a contingency plan, one which involves eating but of course! I remembered that there is a Tao Heung outlet near where we were and a quick navigation over GPS confirmed that we were in fact just steps away. So dimsum breakfast we were meant to have, nicely worked out to be dimsum lunch instead!
END_OF_DOCUMENT_TOKEN_TO_BE_REPLACED

How time flies and we are into the last quarter of the year already. Mid-Autumn Festival was just over a week back  and I’m glad to have finally found time to make some mooncakes this year after a long hiatus for a couple of years. Thankfully this year’s mooncakes turned out alright. As I’d mentioned before in my old blog post 4 years back, I’d always looked forward to the Mid-Autumn Festival because it was always a time for family to come together and enjoy a meal. Pomelo are my favorites from this festival’s delectables, more so than mooncakes! I bought 3 large pomelos before the festival for a song and they are still sitting quietly, waiting to be pried open. And for me, there is no better way to enjoy pomelo than in the classic dessert,  楊枝甘露 Mango Pomelo Sago. END_OF_DOCUMENT_TOKEN_TO_BE_REPLACED

港式鮮蝦雲吞蝦籽撈麵 Shrimp Dumplings with Shrimp Roe Noodles is a must-eat for me whenever we visit Hong Kong. My usual joint would be Lau Sum Kee 劉森記 at Sham Shui Po, together with his uber yummy braised beef brisket, not forgetting the wonderfully braised pig trotters… My oh my, I can feel my salivary glands churning up some juices already as I recollect my dining experiences there when I pen this. Incidentally, here is also one of the few places in Hong Kong where one can still find traditional egg noodles known locally as 竹昇麵 zhuk sang meen, whose dough is manually compressed and plied using a thick bamboo pole with someone applying his own weight by sitting on it. We’d eaten shrimp dumpling noodles umpteen times over our countless trips to Hong Kong from the earliest ones more than a decade ago to popular tourist traps like 池記 and 沾仔記，to the other more local joints like 麥文記， 麥奀雲吞麵世家 and 何洪記, not to mention the very many “nameless” stalls all over the territory. Oddly, I’d never mustered enough courage to try and make it my own, probably because after eating the noodles at so many joints, we’d somewhat formulated our own benchmark of what good shrimp dumplings should taste like, seemingly unattainable by my then-understanding of the ingredients for making it. But after observing the workers prepare the filling and wrap the dumplings right before our eyes during our numerous visits to these noodles shops found all over Hong Kong, chatting up with some of the cooks with my impoverish Cantonese trying to steal a trick or two in the process, and of course, reading up some credible recipes from various blogs and books, I think I’m ready to give it a shot. So here’s my rendition of the dried form of the ever-popular 港式鮮蝦雲吞蝦籽撈麵 Shrimp Dumplings with Shrimp Roe Noodles.
END_OF_DOCUMENT_TOKEN_TO_BE_REPLACED 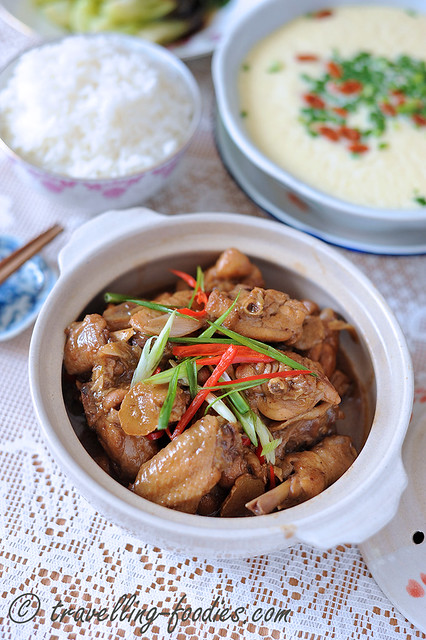 Of all the Chinese regional cuisines, I especially love Cantonese-styled cooking. One thing which attracts me to it is the wide variety of dishes cleverly whipped up by the Cantonese chefs, be it the morning fare of 粥品 porridge, 肠粉 cheong fun, 点心 dim sum, a quick luncheon of 雲吞竹昇捞麵 shrimp dumpling noodles to the late night street hawker stir-fry，colloquially known as 大排档 dai pai dung. Some of these are very challenging and tedious to re-create at home, like a good 干炒牛河 Beef and Rice Noodles Stir Fry，without adequate 火力 ” fo lek aka fire power” in our kitchen stoves to produce the 镬气 “wohei” which characterises good Cantonese stir fry. But some are more home-kitchen friendly, like my favorite 柱侯牛腩焖萝卜 Braised Beef Brisket with Daikon in Chu Hou Sauce which I’d cooked umpteen times to the pleasure of family and friends who had tried it. Despite the simple procedure, it does take quite a bit of patience for the brisket to be cooked down to become uber soft and fork tender. Hence, when I want to cook something fairly quickly but no less gratifying, I would whip up yet another Cantonese classic, 柱候酱焖鸡 Braised Chicken with Chu Hou Sauce instead.
END_OF_DOCUMENT_TOKEN_TO_BE_REPLACED

Over our numerous trips to Hong Kong, we’d tried quite a number of 雲吞麺 wantan mee joints. I remember vividly the first joint we’d visited eons back was 池記 in Causeway Bay. It was with a 拜碼頭 mentality that we went as they were purportedly very good. Or so said those who recommended the place to me. The experience was disappointing. The serving was too small to justify the price and the soup was laced with so much MSG we probably gulped down multiple times more water to ease our throats and clear it out of our system. And the price of one small bowl of wantan mee at 池記 Chee Kee was easily 2-3 times of what one would expect to pay in Singapore at that time. In short, the experience was pretty nasty. Oddly, the place was swarmed with tourists from across the border, Mainland China. As we watched those who shared the table with us slurp the noodles and down the soup with much relish, we couldn’t help wonder if there was something wrong with our tastebuds or theirs. in retrospect, I guess it was essentially not a case of one being inferior to the other but more of being different. Some aspects of  Chinese cuisine have been dubbed as being liberal to a point of being relentless with their use of salt and MSG. Perhaps 池記 had changed their recipe to better suit the tastebuds of their comrades from the “Motherland”. All purely speculative…

Our experience at 池記 inhibited our sampling of many other wantan mee places. Most notable are amongst the 香港5大雲吞麺家  “Wantan Mee Famous Five” in Hong Kong, that is  麥奀雲吞麺家 “Mak An Kee” in Sheung Wan， 麥奀記 (忠記) 麵家 “Mak An Chung Kee” Noodle in Central， 麥文記麵家 “Mak Man Kee” in Jordan, 何洪記 “Ho Hung Kee” in Causeway Bay, and 正斗 “Tasty Congee and Noodles” in Happy Valley. Their roots can be traced back to the original 池記 “Chee Kee” in Guangzhou China, where all of the “founders” of the Famous Five apprenticed. Our “logic” then was if their grandmaster tasted crap to us, the disciples couldn’t stray too far from being unpalatable.

END_OF_DOCUMENT_TOKEN_TO_BE_REPLACED

I made this based on the recipe provided on my dear friend Wendyinkk’s “copycat version” of the famous “Kedai Mee Onn Kee Beef Brisket Noodles  安記牛腩粉麺” from the equally if not more famous “36 Stalls”, the oldest food centre in Kampar Town, Perak. Silly me unintentionally “bastardised” it by being overtly zealous with the ingredients. Apart from the standard beef brisket, I’d added tripe and my favorite beef tendon as well. It was only after I’d made the dish when I went online to search for more photos and description of the original version and to my greatest “horror”, the real McCoy actually looked remarkably simpler and impoverish in looks. So is my version like the actual Onn Kee Beef Brisket Noodles, well I really don’t have an answer to that. But one thing I do know is that it taste quite delicious. 🙂
END_OF_DOCUMENT_TOKEN_TO_BE_REPLACED

While walking through Sham Shui Po during our recent trip to HK, we’d decided to stop for a quick bite at 合益泰小食 which we’d read about. This is a small eatery located very near to Ap Liu Street Market and is well known for the local street food it provides.  Food is kept very simple and unpretentious here and it is precisely this that attracts hoards to this place, especially the lunch and dinner peak crowds. Lucky for us, it was just after the lunchtime rush hour, so no queues. But as with most local Hong Kong eating places, sharing tables is something which one should almost expect. When in Rome do what the Romans do…
END_OF_DOCUMENT_TOKEN_TO_BE_REPLACED