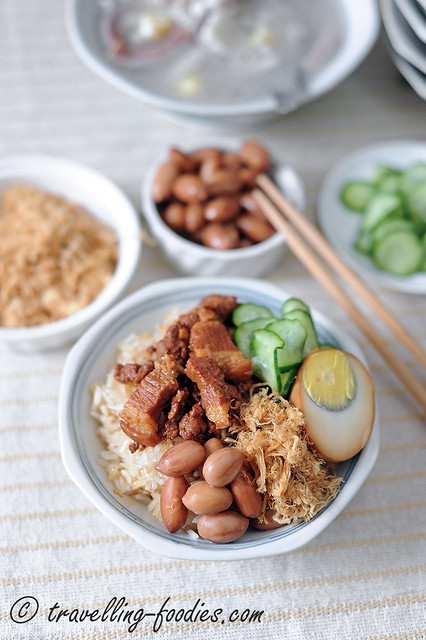 I have a confession to make. I have an uncanny liking for anything with glutinous rice in it. It can be just plain savory version of steamed glutinous rice topped with shallot crisps and roasted peanuts, or a slightly jazzed up version of my grandma’s wicked “zok bee png“. Otherwise, a bak chang or two comes easily as a meal replacement for me anytime of the day.  I also love it in sweet desserts, be it in Kueh Sarlat or the Japanese Sakuramochi a la Kansai  Regardless of the form, I just love ’em all. Despite the high glycemic index glutinous rice purportedly has which can cause all of us to fatten up quickly, nothing really beats the sticky, chewy and a somewhat down-to-earth sensation glutinous rice provides that fills the tummy and the appetite at the same time. Perhaps I’d inherited my tastebuds from my mum, because she loved glutinous rice dishes as well. Or perhaps that is just the old soul in me, that constantly yearns for traditional flavours that many glutinous rice dishes are embodied with.

Like me, many Taiwanese are also particularly fond of dishes using glutinous rice. I’m pretty sure this is a very Asian thingy, or perhaps even a Hokkien thing. Like I’d mentioned previously, many Taiwanese signature dishes originated from Tainan, being the earliest urbanised regions in all Taiwan. 台南米糕 Tainan Glutinous Rice Bowl is one of them. One of my all-time favorites!
END_OF_DOCUMENT_TOKEN_TO_BE_REPLACED