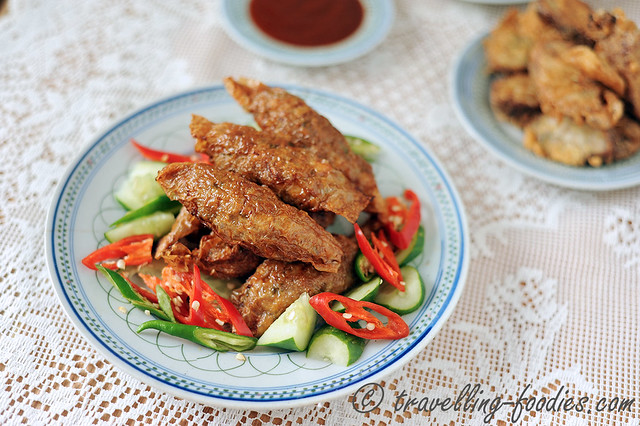 END_OF_DOCUMENT_TOKEN_TO_BE_REPLACED

Penang Lok Bak is one of those dishes which had intrigued me for the longest time. Being in Singapore, we are more accustomed to the cuisine and cooking styles of the southern Peranakans at home and in Melaka. I practically grew up eating chap chye, kari ayam and ngoh hiang. My grandma, together with my aunts and my mother would whip up a whole table full of mouth-watering dishes whenever there is a family gathering and these three dishes would definitely make their dutiful appearance on the dining table. Sometimes one, sometimes two and if we are lucky, all three! So a large part of my growing up experience is made up of “food memories”, from eating to observing and finally to cooking.

When I first came across the term “Penang Lor Bak” a couple of years back, I had thought that it would be rather similar to the Tau Yew Bak which was frequently cooked at home as well. But prima facie, it looked no different from the ngoh hiang which I’m familiar with! Utterly confused, I took my first bite and received an even greater shock, only to realise that despite the somewhat familiar flavours, the textural profile was utterly different from ngoh hiang! And to make things “worse”, I actually liked it!