I used to live along Upper Serangoon Road near the old Lim Tua Tow Market where there was lots of good and cheap hawker food around. Those were the days when our area were the only HDB blocks around and the vicinity was just nothing but a Teochew cemetery. Serangoon Central came later and NEX Shopping Mall didn’t even appear until 20 years had passed. The crocodile farm was still around and Upper Serangoon Shopping Centre was not a ghost town like today. Down my old block there used to be quite a good wanton mee stall, operated single-handedly by a middle-aged lady whom we refer to as the “wanton mee auntie”. Our favorites were her 鳳爪麵 “fung zau meen” with succulently braised chicken feet, that my mother forbade us from enjoying as it was believed that eating chicken feet during one’s pre-pubescent years can result in trembling hands and thus ugly handwriting.  We ate nonetheless, secretly buying from the “wanton mee auntie” of course, telling her they were for my mum! So yummy! How to resist!? For us, wanton mee auntie’s 鮮蝦水餃 sin har shuei gau was something special as well. It was a time when 1.50 can get you a bowl of springy egg noodles in yummy soup along with three plump shuei gau and an additional 50 cents can get you two more. Long gone are the days of cheap and affordable hawker food of course, and long gone are the days of authentically cooked hawker food as well… 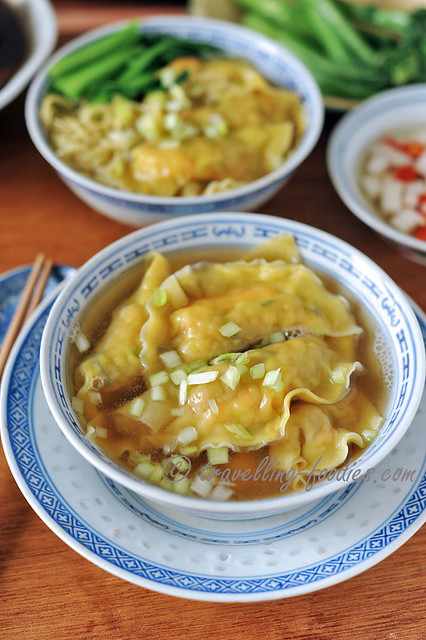 I still remember the taste of wanton mee auntie’s shuei gau.  The shrimp were springy and had a delightful bounce in texture. The slivers of black fungus aided in creating a lovely chew. The minced pork chosen was a tad fatty with bits of lard noticeable to the palate and the shuei gau were always cooked to perfection such that the skin wrap was silky soft that flowed like fabric in a stream of warm broth, which was sweet and complex in flavour at the same time, a profile which I later learnt as “umami”. 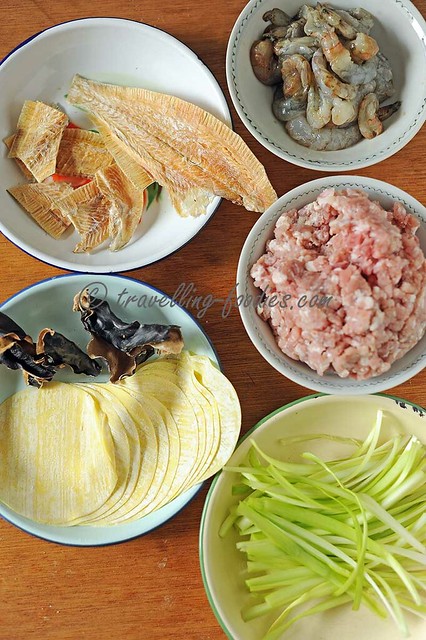 I’d made shuei gau many times over the years, in attempt to recreate the familiar childhood “wanton mee auntie” version which I grew up eating. The breakthrough came of course, when I started visiting Hong Kong regularly about 15 years back, eating dumpling noodles on practically every trip, learning a bit at a time about how they marinate the filling and wrap the dumplings.

Despite their appeal, the ingredients to making shuei gau is not complex at all. Given the relatively short ingredient’s list, each component MUST BE carefully chosen to ensure maximum satisfaction in the end product. So if your area only has frozen minced pork or frozen vannamei shrimp, this recipe is not for you. Compared to making wanton dumplings, the pork ratio is much lower in making shuei gau. Despite taking a subsidiary role, the meat has to have a good amount of fat. Traditionally the meat is finely diced and then chopped over two Chinese cleavers but no one has the time and patience to do that anymore. Yet even with ground pork, one must be prudent with the choice. I use pork belly which I would ask the butcher to remove the skin and then grind it down for me. There are some folks who prefer meat around the neck or shoulder butt, while I know some noodle shops in Hong Kong only use fresh pork from the upper parts of knuckle as well. While the latter can be a little hard to specify, so pork belly works fine for me.

The shrimp should be fresh, marinated separately and beforehand. In the past, 硼砂 borax was used to make the shrimp really bouncy and succulent, an age old culinary open secret known to many, but this practice widely frowned upon and have ceased with most folks as borax is now known to be a suspected carcinogen amidst other ill-effects it may deliver. For me, it is a mixture of 风车粉 “fung che fun” potato starch and egg white nowadays. Not quite what borax can do but close enough I guess. 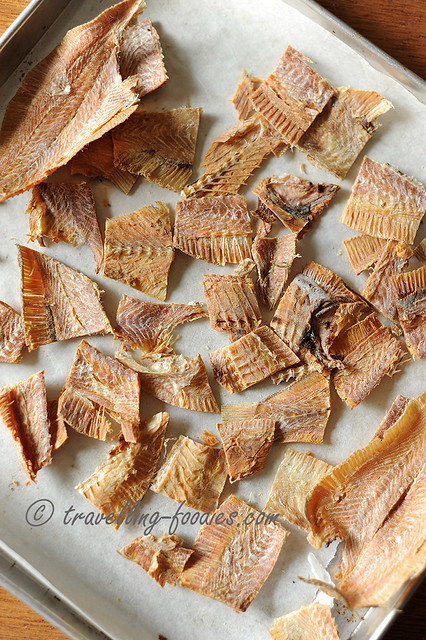 The heart and soul of good shrimp dumpling lies in the use of dried 大地鱼/扁鱼/左口鱼 sole. While one can buy them in powdered form readily in certain grocery shops, I like to make it my own. In the past, I use to sautee the whole pieces with a little oil until it is fragrant before grinding into powder, but a little trick I’d learnt from the seafood and dried goods folks in Sheung Wan was to grill them in the oven instead for a good 10-15 min until aromatic before pulverizing everything. After cooling, the powder can be kept in airtight containers or ziploc bags with refrigeration. Sole powder is good to incorporate natural umami flavours into many things from meat fillings to soups and porridge. A really handy ingredient to have at home. 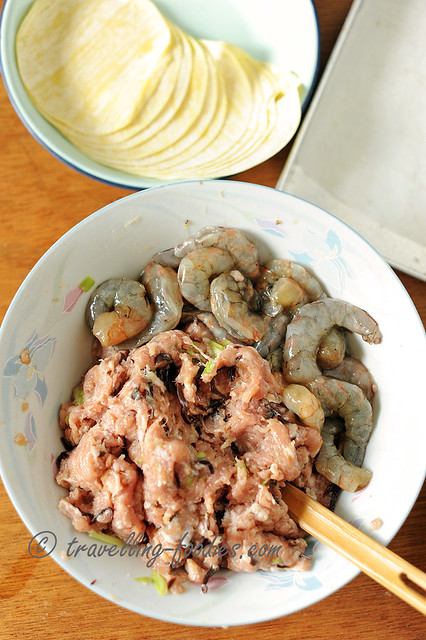 The filling is quite easy to prepare before being left overnight in the fridge to marinate. The shrimp is usually kept separate so that one can keep track of the number of shrimp that goes into each dumpling, one is the standard or you can cut back on the pork slightly and go for two shrimps per dumpling for indulgence. Some folks like to add chopped water chestnut into their filling as well for crunch, while others like chopped chives or spring onions as well. 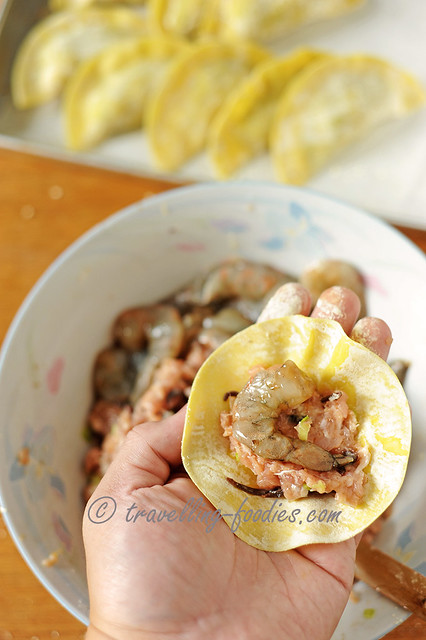 The round skin wrap is used for shuei gau compared to the squarish ones for wanton. A small dollop of minced pork filling is pressed into the centre of the skin before adding the prawns over. Be sure to make sure the edges are sealed tightly with water or a bit of egg mixture. 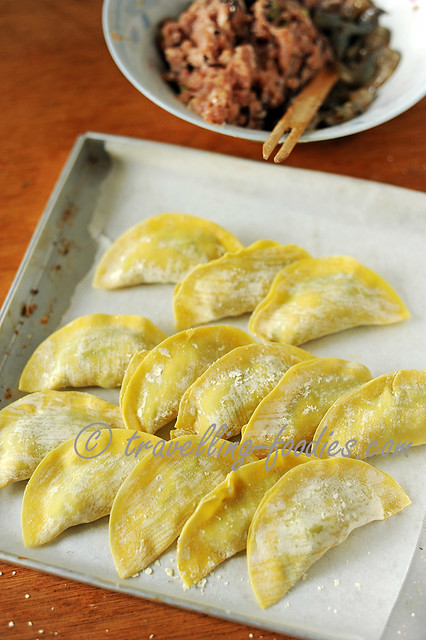 Unlike the shanghainese dumplings or those made in the north, Cantonese shrimp dumplings are generally not pleated on the edges. If one cant finish eating all the dumplings at one go, simply arrange the dumplings in a tray or platter and put them into the freezer to firm up before transferring into a ziploc bag for better storage. That said, it is always better to make them fresh, and fresh is precisely the way I like them! 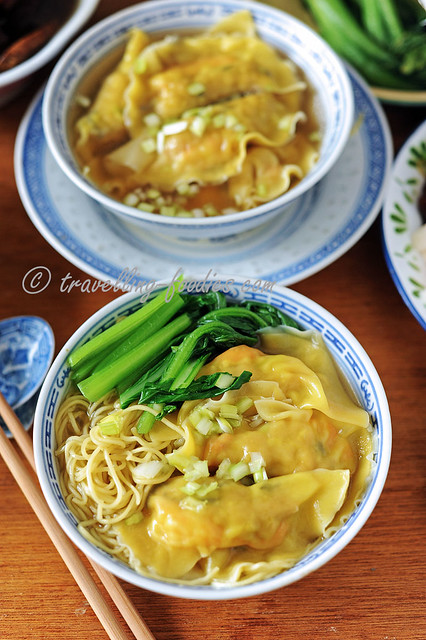 Method
Place processed shrimp and shrimp seasoning ingredients into a small bowl and mix well, leave in refrigerator to marinate for a couple of hours.
Place minced pork, julienned black fungus and minced pork seasoning ingredients into a mixing bowl and mix well, leave in refrigerator to marinate for a couple of hours. Traditionally, the minced pork is repeated slapped against the inner surface of the mixing bowl but one can also use a fork to stir thoroughly.
To the same mixing bowl, incorporate chopped yellow chives and water chestnut if using. Give all the ingredients a good toss. It is important that this is done only just before wrapping to prevent the water chestnut from leaching too much water.
To wrap the dumplings, place a piece of the skin wrap over the palm of one hand. Press a dollop of meat filling in the centre and press down gently to form a slight dent. Place a piece or two of marinated shrimp over the meat. Wet the rim of the skinwrap with water or egg white and proceed to seal the edges of the skinwrap, taking care to expel any air pockets that may be trapped within. This is extremely important to prevent the dumplings from bursting during the cooking process.
Place the wrapped dumpling over a flour dusted surface and repeated the procedure until all the ingredients are used up.

To a pot, add superior stock and dried sole/dried sole powder. Bring to a boil and lower flame to simmer for 15-20 min. Season with light soya sauce and/or salt if necessary. I like to add a teeny bit of rock sugar as well, not to make the broth sweet but just to balance the flavours.
In a separate large pot or kuali, add enough water and some cooking oil for cooking noodles and dumplings and bring to a rolling boil. Add the wrapped dumplings into the pot of boiling water one at a time, stirring gently with a ladle or wooden chopsticks to prevent the dumplings from sticking together or to the bottom. Add rinsed choy sum dnd blanch briefly until stalks soften. It takes less than 1 minute to do so.
As the shrimp dumplings begin to rise to the surface as they are JUST cooked, cook the portions of fresh egg noodles very briefly for no more than 15 seconds each before sieving them out quickly and placing into another bowl of water at room temperature to truncate the cooking process (过冷河).
Toss the noodles dry to get ride of excess water and place the noodles into serving bowls. Quickly ladle some superior stock over the noodles to prevent them from clumping together . Place 3 cooked shrimp dumplings over the noodles and lay some blanched choy sum on the side. Top up with more superior stock if necessary.
Sprinkle with some chopped yellow chives or spring onion and serve immediately. 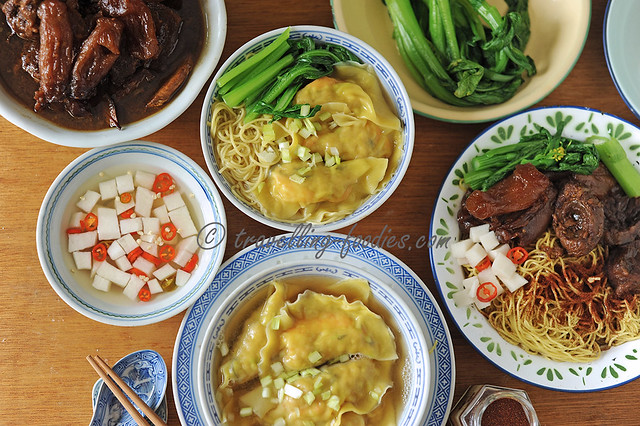