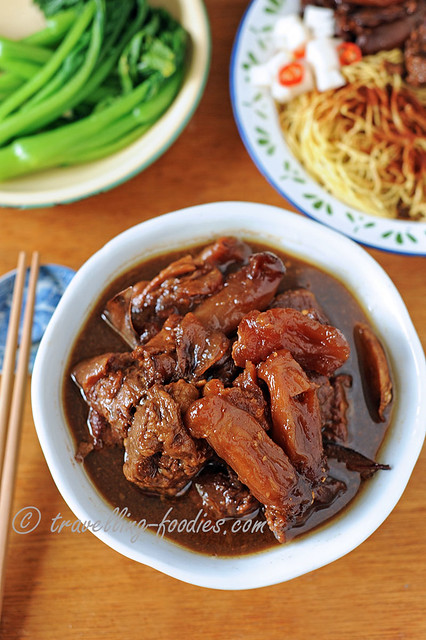 While many bloggers strive to continually blog on new recipes, sometimes rolling out dishes which they’d tried only on the first attempt, I find myself constantly revisiting my old recipes in hope to find ways to refine them, be it to suggest alternatives for ingredients, or perhaps to streamline the workflow of the recipe to make things work better. Just yesterday, I revisited a dish which I’d cooked many times over the course of the last few years. It is definitely one of my all-time favorites，柱侯蘿蔔焖牛腩 Braised Beef and Radish in Chu Hou Sauce… 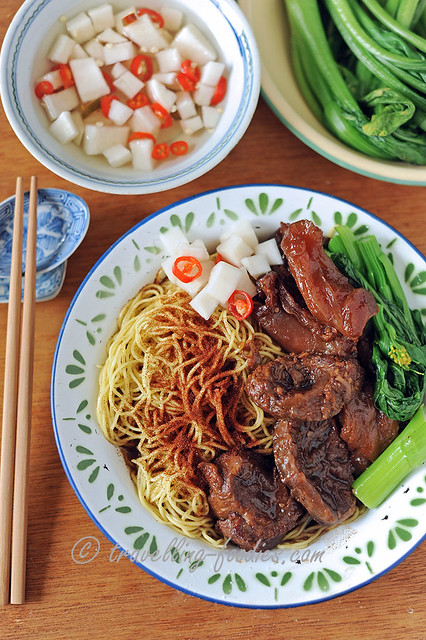 It has become so much of a habit to the point of being ritualistic, for us to visit our favorite noodle joints whenever we are in Hong Kong. Of all the wanton mee places we’d tried over the last 10 years or so, 劉森記麵家 Lau Sum Kee Noodle at Sham Shui Po has a special place in my heart. This was the place when I had my first good 柱侯蘿蔔焖牛腩 Braised Beef and Radish in Chu Hou Sauce in Hong Kong. Before that, it had always been from Crystal Jade’s, which was decent, but not until we’d tried the ones in Hong Kong of course. This was also the place when I first experienced 蝦籽麵 hae zee meen, where toasted shrimp roe was generously sprinkled over springy noodles made the old way, with a thick bamboo pole and hence its name, zhuk sang meen 竹昇麵 known for its 弹牙 qualities. 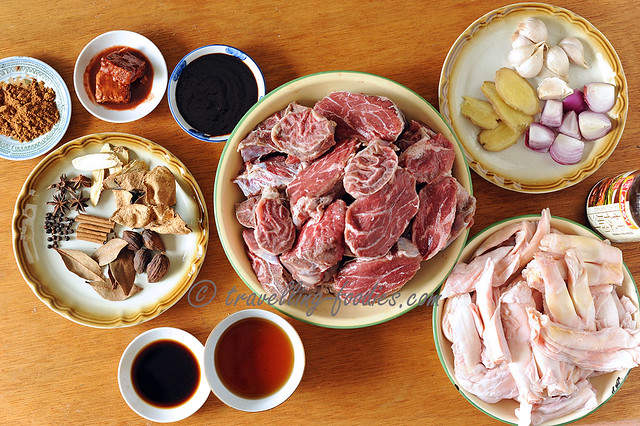 Over the years, I’d been searching for a good recipe for cooking 柱侯蘿蔔焖牛腩 Braised Beef and Radish in Chu Hou Sauce to replicate and relive my experience at 劉森記麵家 Lau Sum Kee Noodle and after trying out several times, I’d finally came up with a concoction which brought me back the flavours that were as close as I could get to the “Hong Kong experience”. It is featured here in my blog and those who had tried the recipe loved it too. Read the comments section to see the “cooking journeys” others had with this dish.

Since then I’d cooked the recipe several more times, often just to satiate a crave whenever I feel like eating it. When you can’t whisk yourself to Hong Kong, you bring Hong Kong to you. At the same time, I took the opportunity to relook at the recipe and made some adjustments along the way. The most significant I think is the choice of cut used. Instead of using brisket, I’d swopped for beef shank and apart from stove top cooking, I’d also incorporated oven cooking into the recipe which helps loads in lessen the time the pot simmers over the stove. Hopefully it helps to bring down the utility bills and at the same time, the risks of burning the bottoms of my pots as well! 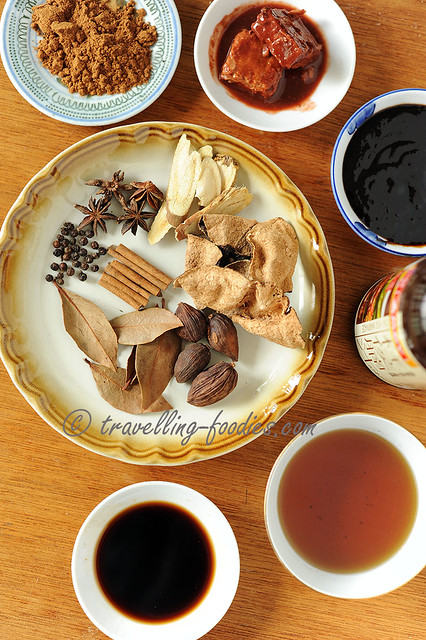 The spice and condiments concoction used in the recipe remains pretty much the same as before. But instead of sourcing for all the ingredients in Singapore, some crucial ones like the nam yue 南乳 fermented red beancurd and chan pei 陈皮 aged tangerine peel are from Hong Kong. My choice of 柱侯酱 Chu Hou sauce remains with 淘大 Amoy’s which I get from Hong Kong as well. The versions we get in our local stores and supermarkets tend to be too salty. Good Chu Hou sauce should have what we call a 甘香味 kam heong mei. Try to use 陈皮 which are at least 3 years and above. The older the peel, the more expensive it would be so you can, do what I do and buy a new batch every year whenever I visit Hong Kong to age them myself. 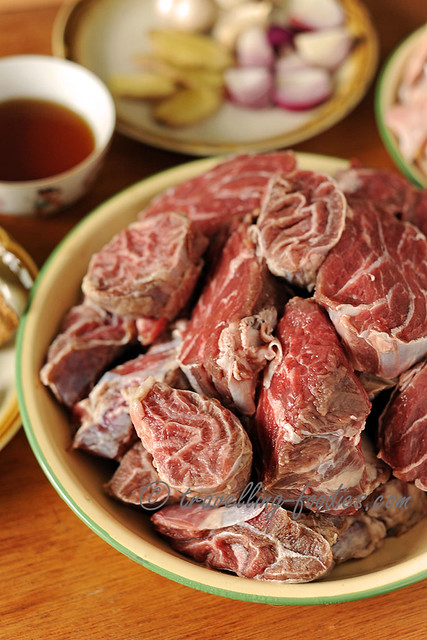 Instead of using 牛腩 beef brisket I’d changed to using 牛腱 beef shank for my beef braises now for the latter’s beautiful tendon marbling. It is so much softer upon cooking compared to brisket, making it really easy on the palate for both young and old. Unlike some cheaper cuts like chuck which are customarily used for braises and stews, shank never dries out, remaining succulent and moist all the time. 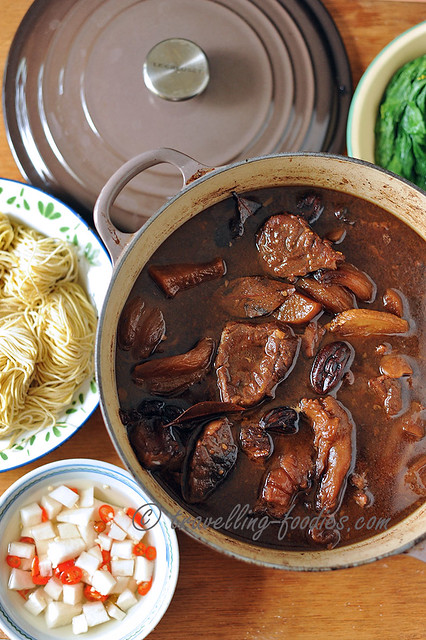 I’d also made changes to the cooking method as I’m using my Le Creuset cast iron casseroles now whenever I cook this dish or for that matter, any braise or stews. The pan searing of the beef and tendon chunks remain the same and so is the sauteeing and initial braising of the ingredients. Water is added to deglaze, after which the ingredients are brought to a boil before turning down to a simmer. After 30 minutes or so into the stewing, I transferred the whole casserole into my oven and let it do the job to gently braise everything for an hour or so. When the timer beeps, the oven automatically shuts off and the entire pot is left in the airtight oven overnight to allow the residual heat to continue work its way into the meat and tendon to soften them. That is why I love to cook this dish at night nowadays so that it would be almost done the next day. The next morning, I take out the whole cast iron casserole out from the oven, by which it should still be relatively warm to touch. The whole pot is then transferred back onto the stove and slowly simmered for another 30 min or so until the tendon becomes wobbly tender. I love this way of braising now as the gentle cooking which the oven offers prevents the meat from disintegrating into pieces which can happen when one is not careful with stovetop cooking. The heavy lid also helps lock and seal in all the flavours and aromas. 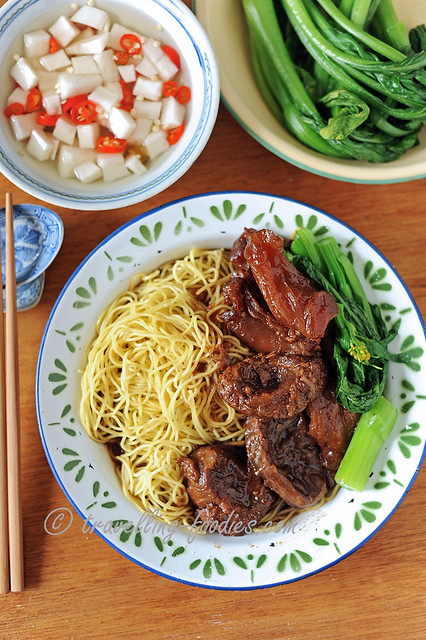 And I love to eat this dish with springy egg noodles. No we can’t get zhuk sang meen 竹昇麵 off the supermarket shelves here in Singapore but we do have a version which is also quite decent, That said, it takes a bare few seconds to cook fresh egg noodles and don’t forget the 过冷河 procedure where the blanched noodles are briefly dipped in cool water before being quickly drained again. It is an all too familiar sight if you have visited noodle shops in Hong Kong before. I’ll elaborate on the technique in my next post. 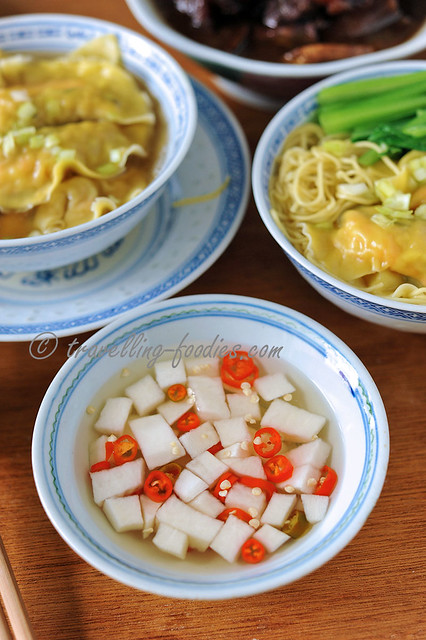 And to make the entire episode more authentic, I’d also prepared some 酸蘿蔔 pickled radish with my own homegrown chilies. Definitely organic! It is a very simple process actually but requires it to be made one day ahead. Recipe below… 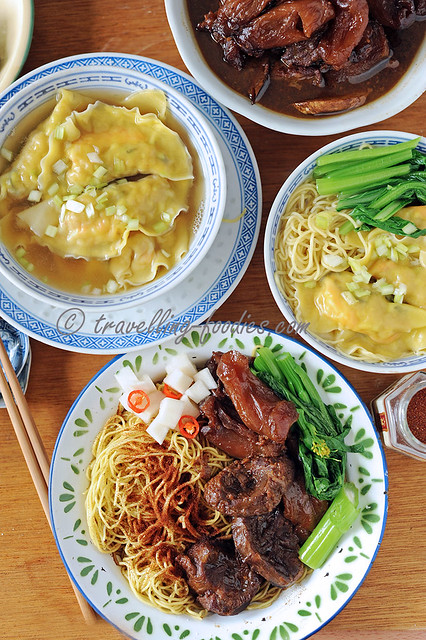 And for lunch, I’d made some shuei gau 水饺 shrimp dumplings to make the dining experience more complete. It definitely feels like being back in Hong Kong again, munching on well braised beef tendon and slurping down the shrimp dumplings in superior broth soup at the same time.

Recipe for 柱侯蘿蔔 焖牛腩 Braised Beef and Radish in Chu Hou Sauce here. But do note the modifications and changes described above.

Method
Cut the white radish into small 1 cm cubes
Cut the chilies in 1/2 cm thick rings
Place rice vinegar, water, sugar and salt in a small pot and bring the mixture to a gentle boil before turning off heat. Set aside to cool down.
Place the chopped radish and chili into a dry and clean container. Pour the liquid mixture into the container, cover and store in the fridge overnight.
Next day, drain the radish and chili from the container and serve with noodles. 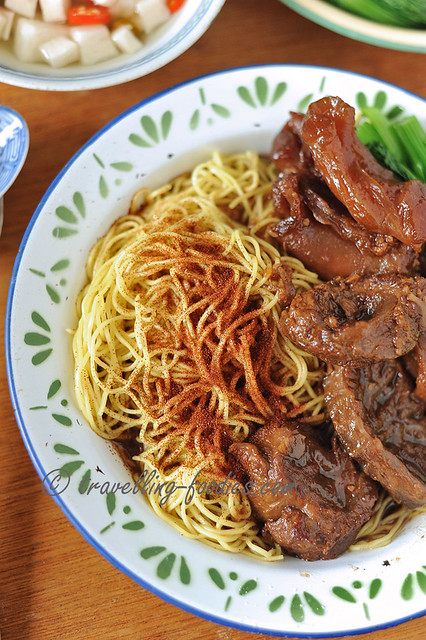