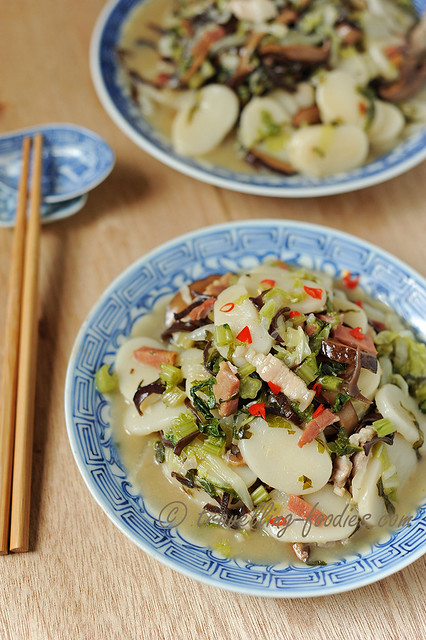 I love visiting Taiwan and despite having made than a dozen trips there over the years, the place, the food, and the people continue to astound and inspire me in ways one or another. For most of my previous trips, I was more interested to discover and learn about the mainstream local food fare of Fujian (Min) origins and how the same dish may vary across different places within the island, be it the way which the dish is cooked or sometimes even how they are named. I was also fascinated by the incorporation of local specialty produce into some common dishes which set them apart from the other versions. In doing so, I try to map out the similarities and differences between the Taiwanese local cuisines, with dishes we commonly see at home here in Singapore and Malaysia, especially those of Hokkien origins and even those from the Peranakan heritage. In my most recent trip however, I turned my attention to cuisines from the minority communities within the Taiwanese Chinese diaspora, namely the Shanghainese and the Hakkas and the best place to start is usually chatting with the stall vendors at their local markets. That was where I’d learned and became inspired to cook many Taiwanese local dishes, including this classic dish, 雪菜肉絲炒年糕 Stir Fried Ningbo Sticky Rice Cake. 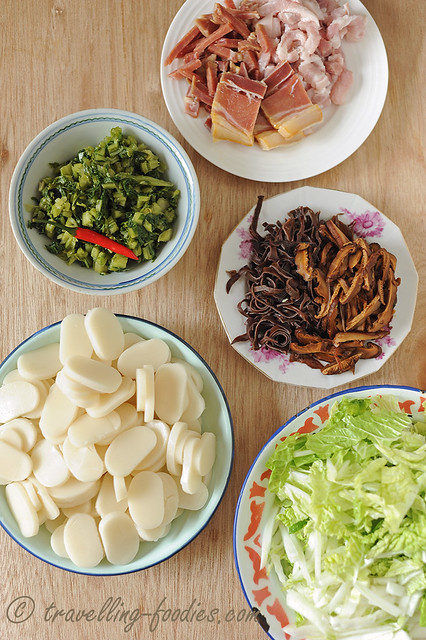 I love visiting the local markets whenever I’m overseas. These trips are literally learning journeys to their local cuisines by first getting up close and personal with the ingredients that are used to churn out the very many wonderful dishes. One of my favorite local markets to visit is 东门市场 which is located within the Da’an district (大安) in central Taipei, just a stone’s throw away from the famous Yongkang Street (永康街) where many popular eateries like 高记 and 鼎泰丰 as well as beef noodle delis like 永康牛肉面 and 老张牛肉面 can be found. The market is divided into two sections, separated by a road，金山南路一段. Owing to its proximity to 大安森林公园 which used to be a 眷村 that housed a large number of families of the troops that retreated to Taiwan with the KMT in 1949，a rather large proportion of the residence around the 东门 area are those who used to live in the 眷村 and thus from the “exodus” to Taiwan then. They included soldiers and their families from Hunan, Sichuan and of course those from the Yangtze region which included Shanghai and Zhejiang where this dish originated.

I “learned” to cook this dish several times in fact, having chatted up with various stall vendors over the years, some selling 雪菜 and 年糕, others selling various soya bean products like 豆干，豆腐， 豆皮. In my latest trip just earlier this week, I had a good chat with an old Shanghainese lady who maintains a makeshift stall at Dongmen Market selling her own homemade 雪菜 only every Tuesday. I took the opportunity to clarify my doubts on cooking 雪菜肉絲炒年糕 Stir Fried Ningbo Sticky Rice Cake and hers turned out incredibly simple and straightforward. 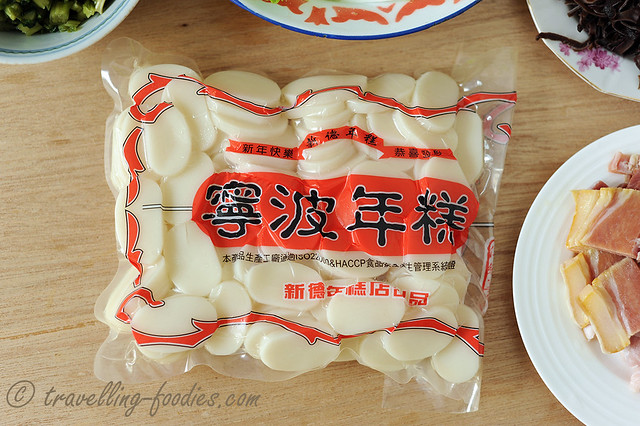 This dish uses sticky rice cake slices made from glutinous rice which is commonly known as 宁波年糕 or 上海年糕. The packaged ones are very easily found in their local markets and supermarkets all over Taipei, usually costing only around NT70 for a packet that can feed easily three or four. As the name suggests, the dish probably has its origins in 宁波 Ningbo, a township in 奉化 Fenghua county in Northern Zhejiang province, most known for the ancestral home of KMT’s 蒋介石 Chiang Kai Shek.

Many “horror stories” I’d read over the internet require these partially dehydrated glutinous rice slices to be soaked for a couple of hours. There is even one that wrote about the need to soak them for many days to go soft, which is utterly ridiculous. The Shanghainese old lady told me that the rice cake slices can be cooked directly after giving them a quick rinse and takes less than 30 min to soften over a low simmer. I totally love the method she mentioned, which is what I’m using for this recipe. 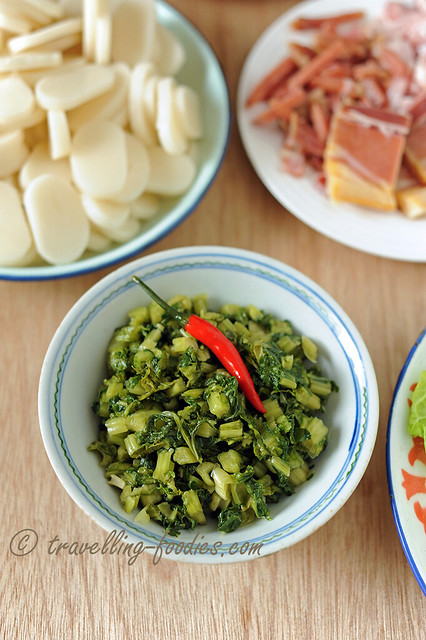 What makes this dish special and perhaps more “authentic” than some other internet versions is the use of some crucial ingredients. The first is 雪裡蕻 which is also commonly written as 雪裡紅, albeit the latter being a misnomer. Otherwise, it is simply known as 雪菜. It is made from a variety of thin-stemmed 芥菜 mustard green with undulated leaves that have been partially sunned before being rubbed with salt and left to brine in its own juices overnight. If you buy 雪裡蕻 in Taiwan, you would notice that most packets would come with a single bird’s eye chili which is used as well during the stir-frying of the rice cakes, or simply with thinly sliced pork. I love this vegetable for its slight astringency and spiciness which reminds of a very mild wasabi flavour that is characteristic of mustard greens. 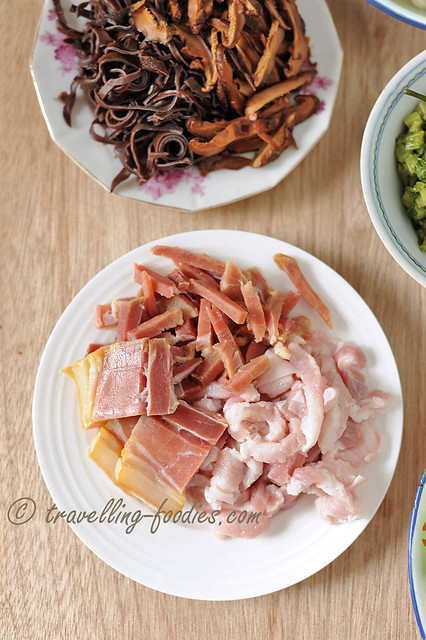 Apart from 雪菜 and other common ingredients like fresh pork slices, Chinese mushrooms, black fungus and wongbok cabbage, the other ingredient which lends its unique flavours to the dish is 金華火腿 Jinhua Ham. Like the rice cakes, 金華火腿 is a local specialty of Zhejiang Province, which explain why it is extensively used in local cuisines in nearby areas like Shanghainese cuisine 沪菜/本帮菜 as well as the larger Yangtze region like 苏菜 Suzhou cuisine as well as Huaiyang cuisine 淮扬菜. Its use is extremely versatile, be it as a main ingredient, like in 扣三鲜 or as an auxiliary ingredient in brewing chicken stock 老母鸡汤 that is used as a base for many other dishes. That said, go easy on the usage as a little really goes a long way. I’d only used a small block of Jinhua Ham for this dish and I did not have to season at all! 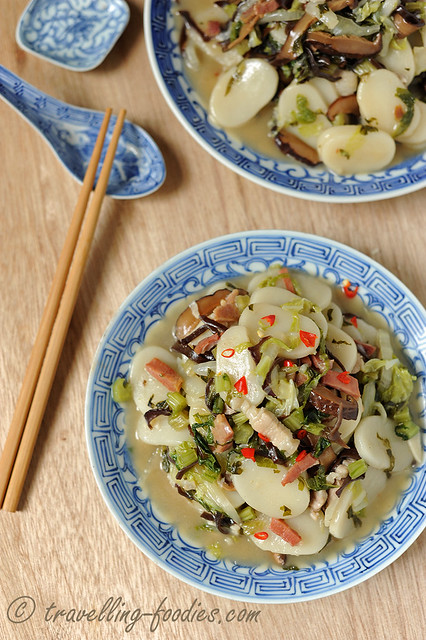 There are two versions of how Shanghainese style fried rice cake are cooked, one with salt and the darker version with dark soy sauce. I didnt have to add any salt at all owing to the 金華火腿 and 雪裡蕻, and I wanted the colours of the dish to show so I avoided dark soy sauce as well.