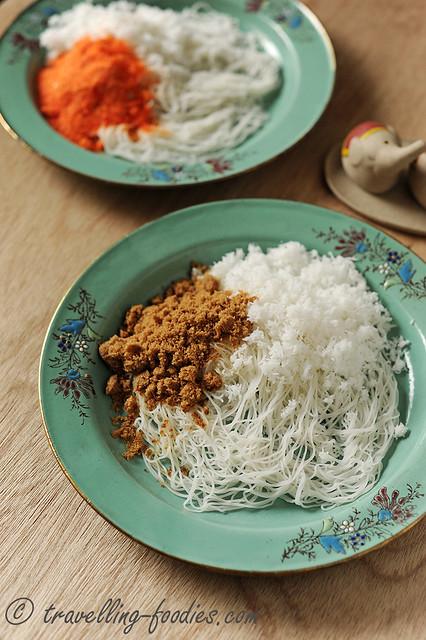 This is an impromptu post for an impromptu breakfast, only because my friend, Adeline Ang posted a vintage mould for making Indian string hoppers yesterday which she gotten recently at the local Thieves’ market that prompted me to go dig out mine and make some “putu mayam” for my first meal for the day! This is one of my regular childhood breakfast treats so being able to make it from scratch at home literally brought me back to the past! 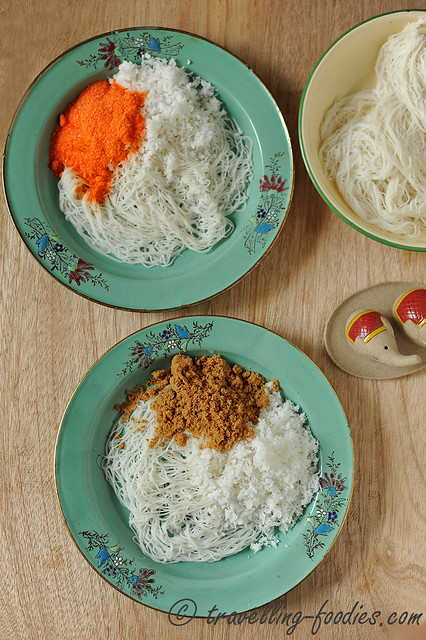 Indian string hoppers which are called “putu mayam” here in Singapore, are better known as idiyappam back in Tamilnadu India where our local version probably originated from. Then again, their names vary slightly too from state to state as with the ingredients used to make them. Further up north in Penang, they are called “putu mayong” while interestingly, the older folks of the Peranakan community in Singapore and Melaka pronounce the name as “kutu mayam“, and “kutu” actually means hairlice in our colloquial tongue! 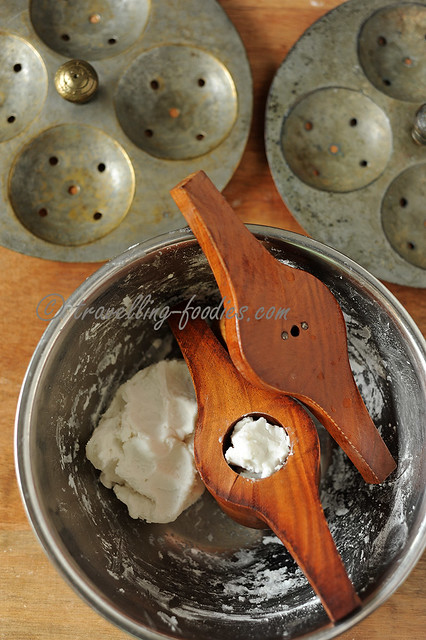 The process of making putu mayam is actually really simple. Only 4 ingredients needed, rice flour, water, salt and some oil! The flour is partially cooked with the boiling water poured over it until a thick paste-like dough is obtained. After that it is just a matter of placing the dough in the mould and squeezing it to form thread-like structures which give rise to the name “string hoppers”. 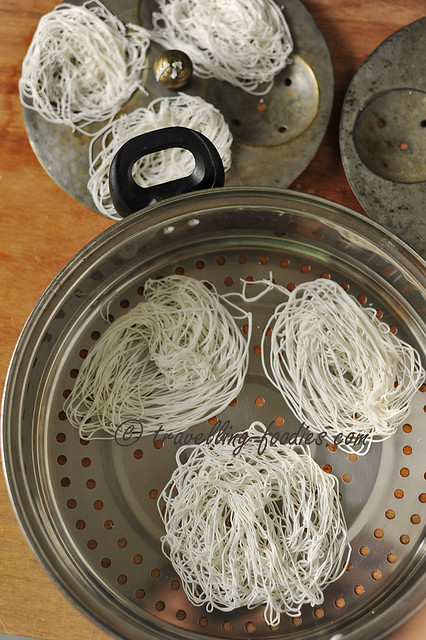 Here in Singapore, especially amongst the non-Indians putu mayam is enjoyed with grated coconut which has been steamed and salted, as well granulated sugar which has been stained orange with tartrazine, a permitted food dye which sometimes labelled under its commercial code E102. In Malaysia, they are eaten with raw brown sugar or jaggery instead for the sweet version. I am a true blue Singaporean and I love my country, but I very much prefer the jaggery version instead! Within the Indian communities however, the ways to eat idiyappam are literally endless, from curries, to sambars to chutneys. Usually enjoyed as a breakfast, they are also good for snacking as well! 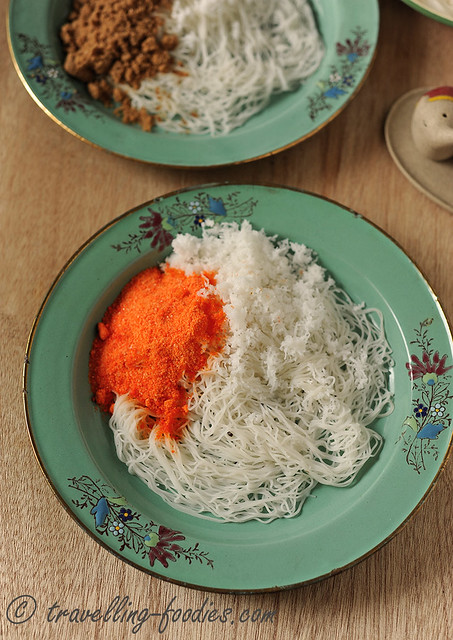 One of the challenges to making putu mayam is getting a mould press of course. Here in Singapore, one can easily get them from the small shops next to Tekka Market along Buffalo Road. Otherwise, cross the road and head down to Jothi’s along Campbell Street next to the Indian Heritage Centre where you can find an assortment of Indian household and cooking paraphernalia being sold. There are two types of mould which can be used, the traditional one is made with wood that has a a small perforated copper disc at one end for the dough to pass through to form “strings”. A more multi-functional one known as a chakli press is made from brass that comes with exchangeable discs that can be used to make an assortment of muruku as well. But do note that the smallest holes found on the brass mould aren’t as fine as those on the wooden ones. Go for the wooden mould which is incidentally more affordable if you can find one. 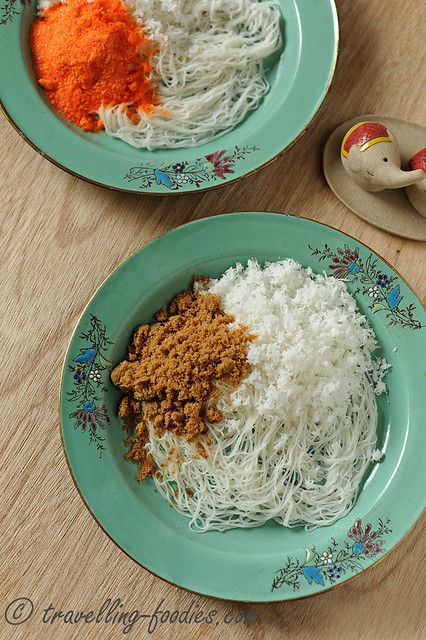 Method
In a small pot, bring the water to a boil. Add salt and stir well.
Pour the very hot water over the rice flour and coconut oil in a heatproof mixing bowl very carefully, in batches until a soft and paste-like partially cooked dough is obtained. You may not use up all the 150g of water, factoring some evaporation. I was left with around 1.5 tbsp of water in the pot after my dough was propely mixed
Cover the dough paste with a damp cloth and leave to sit for 5 to 8 minutes.
Meanwhile, grease the steaming trays with a very thin layer of coconut oil. Wipe away any residual oil with kitchen towel. This serves to prevent the string hoppers from sticking to the trays.
Place a small amount of dough in the putu mayam mould press.
Press the dough through the mould directly over the greased steaming trays in a circular motion.
Repeat the process until all the dough is used up, it should yield between 8 to 9 pieces. One can double or even triple the recipe easily for more pieces.
Steam the putu mayam for about 8 minutes over boiling water with medium high flame.
Leave to cool down slightly and enjoy either warm or at room temperature with grated coconut mixed with some salt and brown sugar.

And here’s a video taken by my friend Adeline back at her hometown in Pulau Tikus Market Penang. Amusing conversation between her dad and Uncle Joe, the putu mayam maker by the way!