Teochew cuisine is characterised by a wide range of seafood dishes. Blessed with the long coastal line in the Chaoshan region in southeastern China, the Teochew people are accustomed to having seafood as part of their everyday lives. From cold crab (潮州冻蟹) to braised cuttlefish （卤墨鱼), their famous shark’s meat jelly (鲨鱼冻), and of course fishballs (潮州鱼丸) the Teochews are well known for their seafood fare, and their innovative use of the precious produce from the oceans. When folks think of Teochew porridge 潮州糜, the first thing that comes to mind is individually grained porridge often cooked with sweet potatoes, enjoyed over a wide range of condiments and dishes, sometimes as simple as preserved olive leaves (橄榄菜), pickled lettuce stems (菜心罐) or salted duck eggs (咸鸭蛋), to pickled radish omelette (菜脯蛋) or even steamed threadfin (蒸午鱼) or braised duck (卤鸭). Otherwise, it would be something as wholesome as a one pot meal like Chinese Pomfret Porridge (斗鲳糜). Yet for most of the Teochews in the past who lived and breathed frugally by the sea, the expensive Chinese Pomfret or threadfin (午鱼) may not be an everyday indulgence. As such, other varieties of Teochew porridge evolved and most notably, shark’s meat porridge 潮州鲨鱼糜. 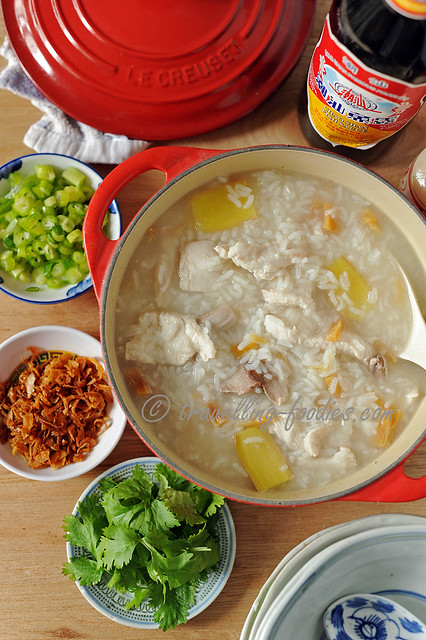 I love Teochew porridge for its “clean flavours”, very light on the palate yet remaining very flavourful . Unlike the Cantonese congee (广东粥） where the rice grains are cooked until they completely disintegrate into the broth, Teochew porridge is identifiable by individual rice grains, in a somewhat clear stock. This is very interesting to me, since the Teochew districts are well nested within the Guangdong province, yet these two groups of people maintained fairly distinct attributes, from their spoken tongue, their mannerisms, down to the way they cook their porridge! 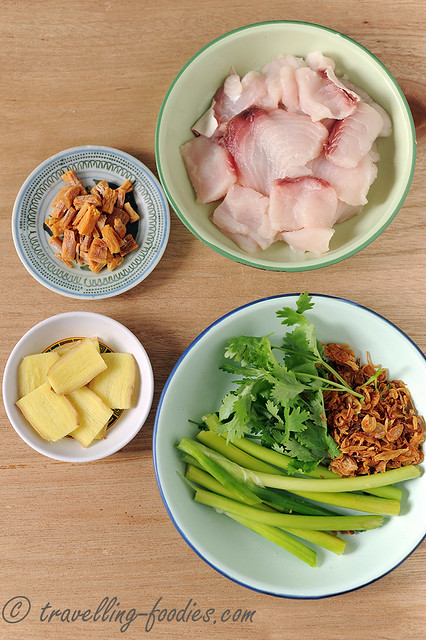 The ingredients for Teochew Shark Meat Porridge is incredibly simple, down to just a handful. I’d used dried scallops to flavour the broth today. Rather unconventional you may think. Otherwise tang cai （冬菜) may also be used. 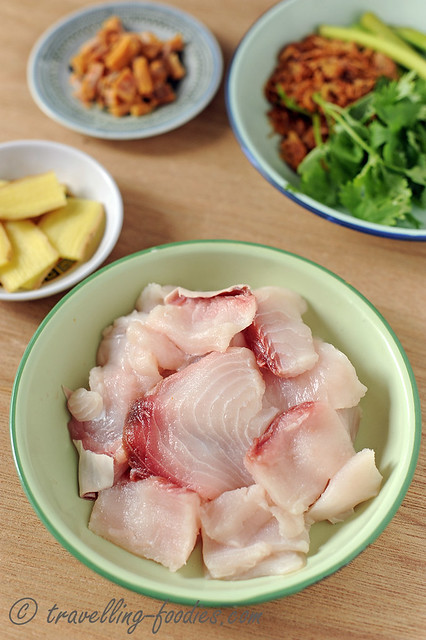 Shark meat may not be that familiar an ingredient to most people. It taste somewhat like stingray. The shark meat I’d used today is that of shovel-nose ray otherwise known as shovel-nose shark or guitarfish. It is fairly affordable, compared to other more popular fish varieties but to me, it is quite delicious as well. One may wish to change to other meaty fish varieties of course. Some good choices are beh kar (Spanish mackerel 马鲛鱼 aka ikan batang)， ngou hner (threadfin 午鱼 aka ikan kurau) and of course, the ever popular chionh hner (Chinese or silver pomfret 鲳鱼 aka ikan bawal putih) 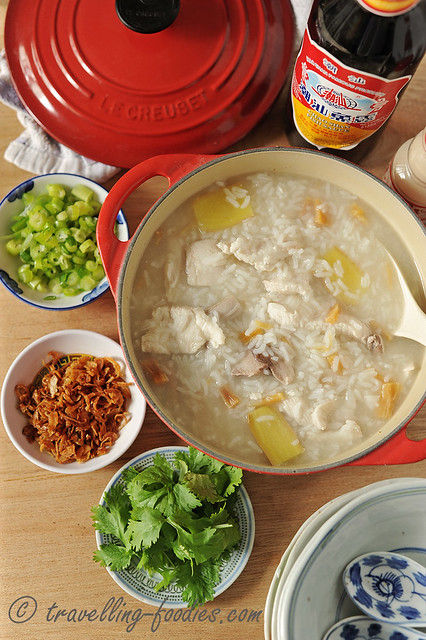 Method
To a deep pot (I’m using my trusty Le Creuset), add broth and scallop soaking water and bring to a boil.
Add shredded scallops and lower flame to a bare simmer. Cover and simmer for 30 min. This allows the flavours from the scallop to infuse into the broth.
Add rice and bring to a boil. Lower flame again and simmer for 15-20 min until the rice grains are totally cooked and soften but still remaining individually grained.
Add ginger slices, followed by shark meat slices. Stir thoroughly for 10-15 seconds. Season with salt and Teochew fish sauce. Adjust according to personal preference.
Cover and turn off flame.
Allow the fish slices to steep in the hot porridge for 1-2 min or so. Do not overcook the fish.
Ladle porridge into bowls and top with chopped coriander leaves, spring onion and fried shallots.
Add a dash of pepper and drizzle on some sesame oil.
Serve immediately.