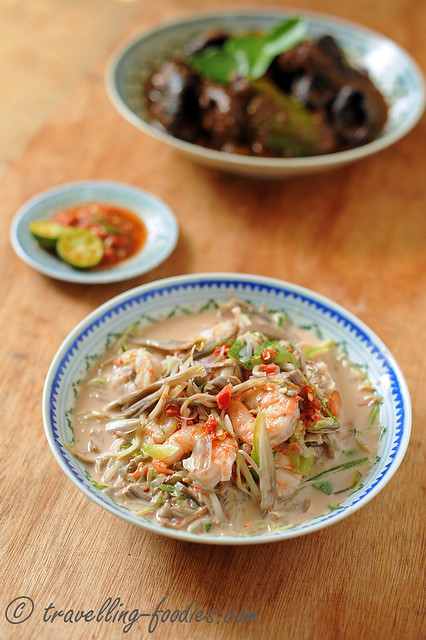 Sambal Jantong Pisang is an old Peranakan dish, much like Sambal Timun with ati ayam, babi samcham, or even kulit babi added, and also Sambal Sayor Bermis. I especially love the latter, the version made by my good friend Poh Lin’s mum. Anyway, that is another story and another recipe altogether. 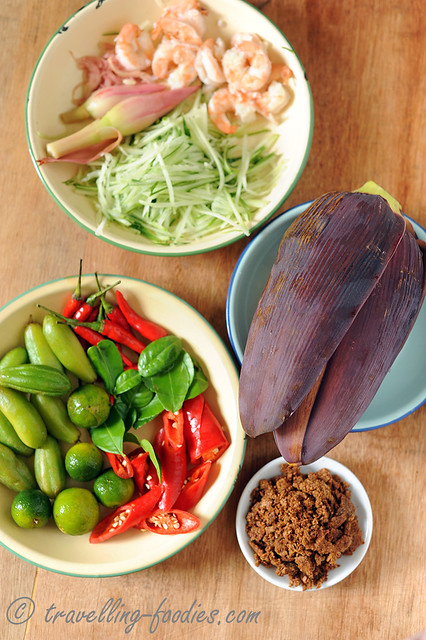 The ingredient list for Sambal Jantong Pisang is fairly standard for many similar dishes, mostly variations of the same theme. The usual culprits of chili padi, red chilies, calamansi lime and of course toasted belachan. The belachan has to be toasted first as it is the only way to accentuate the aroma and umami flavours this ingredient provides as there is no cooking for this dish, apart from the boiling of the banana blossoms and heating the coconut milk. The latter is an interesting inclusion to the standard sambal belachan ingredients which makes this dish special. 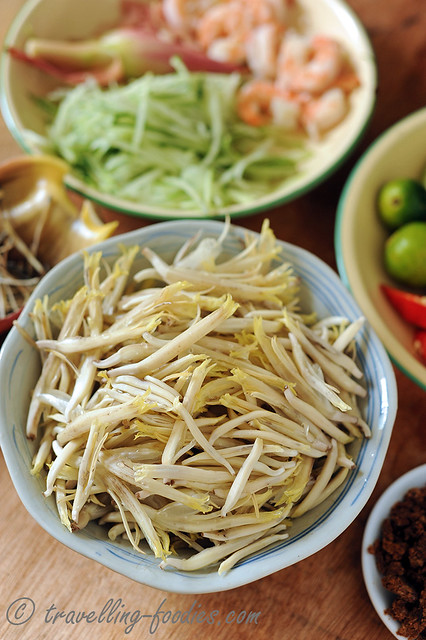 The tedious part in the preparation of this dish is the processing of the banana blossom bud. Hidden within each mauve bract is a row of elongated straw-like cylindrical structures with ivory-coloured corolla and a small yellowish flare at the ends. This is what we are after, the banana flowers. They are very lightly scented, not strong enough to be called ‘perfumed’ and honestly, they don’t taste very much. It is the textures we are after, that unmistakable crunch, even when the flowers are fully cooked for which this dish is much coveted for.

But processing the flowers is a pain, for within each of these tube-like inflorescence lies the reproductive system of the flowers. The stamen, i.e. male parts are ok but it is the carpel which has to be removed. The style is considerably harder than the filaments of the stamen which makes it tough to chew while the ends where the stigma is blackens like the tip of a burnt matchstick which is totally unpalatable. The painstakingly process involves prying open each flower slightly to remove the tough stamen, which includes the stigma and the style, and we are talking about numbers by the hundreds depending on the size and number of the jantong pisang one buys and the number of guests one is feeding.

Select a medium sized flower, one which is around 15 to 18 cm long. Since they are usually sold by “price per piece” basis, don’t be too greedy to go for the really big ones in hope for more flowers because it would mean that the flowers would be more matured and thus tougher. Those which are too small and thus too young would have far less flowers than what one would have hoped for which means the need to buy more than one for a small dining group of four. Quite counter-cost effective as the tough mauve bracts cannot be eaten and that would only mean wastage. I only use the flowers which are still mostly ivory with a few darken blemishes still being acceptable. The flowers would have gone passed their prime if the colour is already very dark or brown, oxidised from exposure to air. Speaking of oxidation, try to keep the peeled and process flowers soaking in water added with a pinch of salt before boiling them in bulk. This prevents them from browning too much. Try to peel off each bract when opening the bud to remove the flowers instead of cutting it with a knife, which exposes the inner tissue layers within. One would notice immediately that a sticky secretion would be produced and it doesn’t take very long for those cut portions to turn brown. Not very pleasing to eat.

Finally, while the external coloured bracts are unpalatable, the very young layers tightly tugged within each heart are. and can be boiled together with the flowers. Should one have already garnered enough flowers to make a decent dish, one can decidedly skip the inner bracts instead. The reason is simple, the bract structures are tougher than the flowers and would take a considerably longer time, up to an hour to cook thoroughly. One cannot eat any part of the jantong pisang raw or even half cooked as it would be quite astringent and “sappy”. 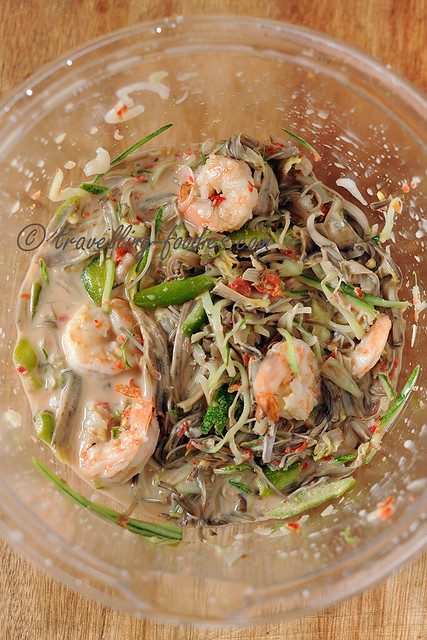 There are several schools of thought when it comes to the cooking of the flowers. Some folks like to cook each banana bud whole in a large pot of water, for up to an hour as mentioned above and then do the processing of the flowers within after everything is completely cooked. Others would cut the bud lengthwise into two, i.e. longitudinal cut and dump the halves into boiling water. And there are some like me, who like to peel the flowers first and cook only what is needed and discard the unwanted parts beforehand. I prefer the latter because firstly, it takes much less time to cook with the flowers all peeled and tumbling in the boiling water, rather than having them all hidden within the bud. Secondly one would notice that the boiling water browns during the boiling process and would in turn colour the flowers. This is especially so when the mauve bracts are boiled together with the bud as halves or as a whole. I prefer to keep the flowers as close to their original colours as possible and would try to minimise the browning process by removing the flowers first. 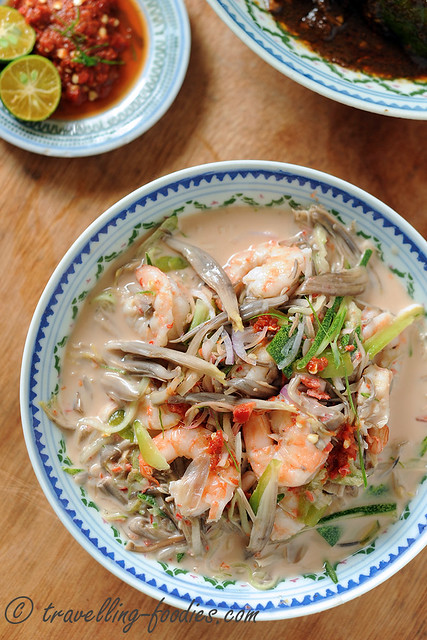 With the main task completed, the rest of the process is fairly straightforward with just assembling all the ingredients together before giving everything a final toss. Be sure to use the freshest coconut milk one can find, as it is the melange of flavours, richness and sweetness from coconut milk, crunchiness of the cucumber and bananas flowers, spiciness and umami flavours from the sambal belacan, sourness from the calamansi limes and belimbing, complete with the interplay of characteristic aromas from the daon lemo purot and bunga kantan  that completes the dish…ada asam, ada manis, ada pedas, ada lemak, chukop rasa, chukop wangi… uniquely Peranakan.

Method
Carefully peel away the petal-like bracts from the banana bud and  pluck out the small and elongated blossoms. Soak in water to prevent them from browning.
Pull out the hard stamen from the banana blossoms. They look like burnt matchsticks and are not pleasant to eat. See photos here
Bring a pot of water to boil and lower the flame to a gentle simmer and add a pinch of salt. Lower the banana blossoms into the water and allow it to cook for about 30 min until soften. Drain and set aside.
Place cooked banana flowers, and all the sliced ingredients i.e. cucumber, torch ginger bud, belimbing, kaffir lime leaves and shallots in a clean mixing bowl. Cover and chill in the fridge.
Heat the coconut milk in a small pot with salt until small bubbles begin to form around the perimeter and the coconut milk thickens. Do not allow it to come to a boil. Set aside to cool down slightly.
Pound or blend all the chilies into a coarse paste. Add toasted belacan powder and continue to pound/blend until it becomes a fine paste. Add calamansi juice and adjust with salt and sugar to taste. Add coconut milk and stir thoroughly. Adjust taste with more salt or lime juice if necessary.
Drizzle dressing over the ingredients and toss to mix uniformly.
Plate up and serve, with more sambal belacan at the side.