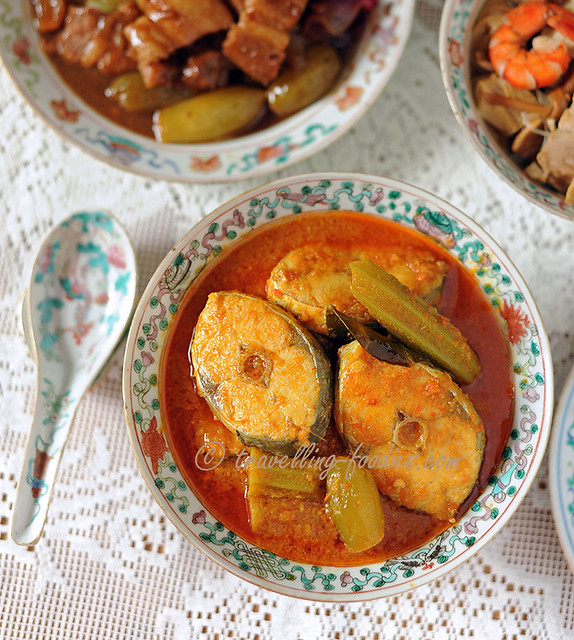 Ikan Gerang Asam is one of the first Peranakan dishes, or what is known to the babas and nyonyas as “laok embok” I’d “learnt” to cook when I was young, after getting to know the tricks to frying sunny sideups with runny yolks and crispy edges for telor tempra and braising tauyew bak until the collagen-packed babi sam cham become wobbly soft that is. “Cooking lessons” were never formal or formative, save for the times when I was taught how to use a “pisoh chye toh” , a Chinese cleaver that is, to do a wondrous list of things with it, to potong, to iris, to bukak, to persiang, to kupair a wide variety of ingredients. Otherwise it was always learning through observing how my mum and grandma worked around the kitchen while helping out with the tasks along the way and of course tasting the yummy dishes they’d prepared. And it was the same with “learning” to cook Ikan Gerang Asam”… 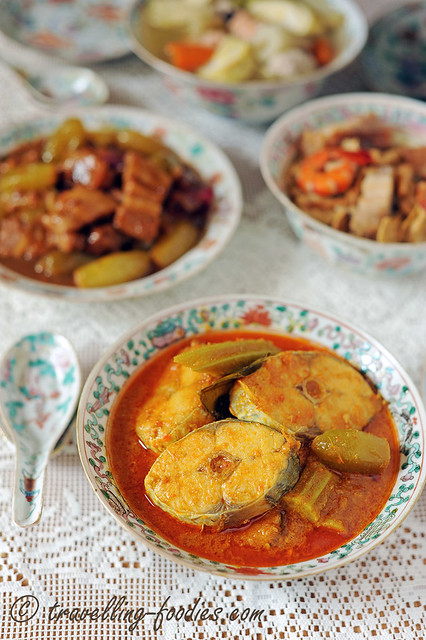 Learning to cook at home since young had always been a progressive, intuitive, impromptu, unintentional and uninitiated affair. Many a times, we were summoned into the kitchen, albeit reluctantly to help with the food preparation process. It could be as fast as to fetch an ingredient from the fridge while my mum was busy with her cooking, tumbok chilies and shallots for a rempah, petek the leaves from the stalks of kangkong or to peel away the fibrous membrane on the stems of daon kledek or sayor bayam. It wasn’t without grouses and lamentation that we completed the tasks set for us, for if we had not, it would mean no lunch or dinner for us at all! Looking back in retrospect, these “lessons” were an investment my mum had put in place, without deliberation of course, for without which we would not have been able to savour all the flavours of my childhood, now that my grandma and mum are no longer with us. 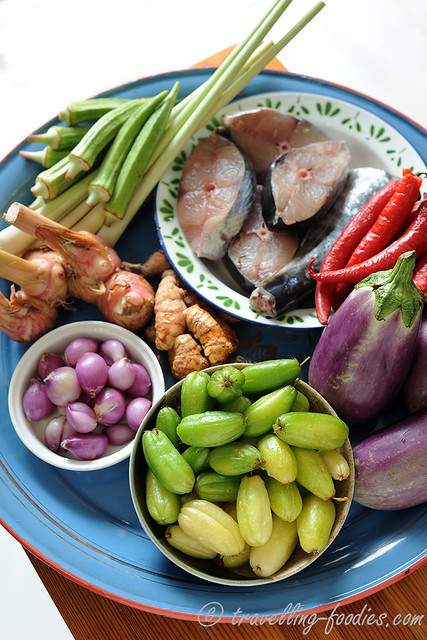 The ingredients for Ikan Gerang Asam can be quite daunting for the uninitiated, a dish which also acts as an epitome of classic Peranakan cooking, largely influenced by Malay cuisine and thus the art of rempah making. Different dishes call for different rempahs, though comprising of more or less the same list of common ingredients, varying in proportions to produce the nuances which makes one rempah different from the other. For this dish, a unique rempah is used which marries the roots and condiments with the use of asam jawa, i.e. tamarind pulp, thus giving rise to the name “rempah gerang asam” from which this dish is named after and synonymously known for. This rempah is also forms the base flavours in yet another signature dish in Peranakan cuisine, Ayam Masak Buah Keluak or even better still Tulang Babi Masak Buah Keluak! 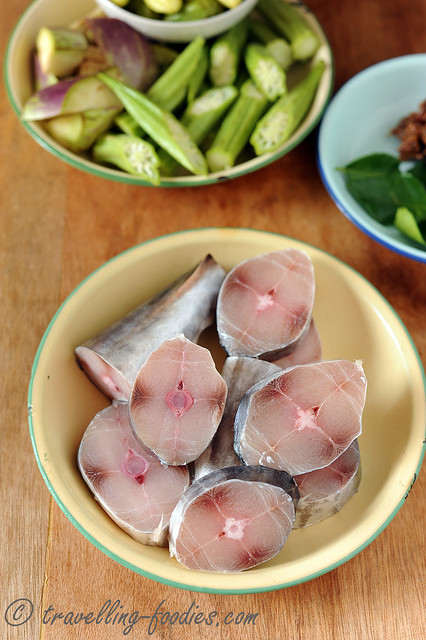 A wide variety of fish can be used for cooking Ikan Gerang Asam but by far the most common is ikan batang, i.e. Spanish mackerel for its meaty textures. Its closely related cousin, ikan tenggiri, i.e. barred Spanish mackerel would be an excellent choice too, as with the other smaller members of the mackerel family like ikan kembong i.e. Indian mackerel and ikan selar i.e. one-finlet scad.  Other fish varieties like ikan bawal, i.e. pomfret and ikan pari, i.e. stingray are all good for this dish just like how they are being used in the Penang version of this sour and spicy fish dish, Gulai Tumis. 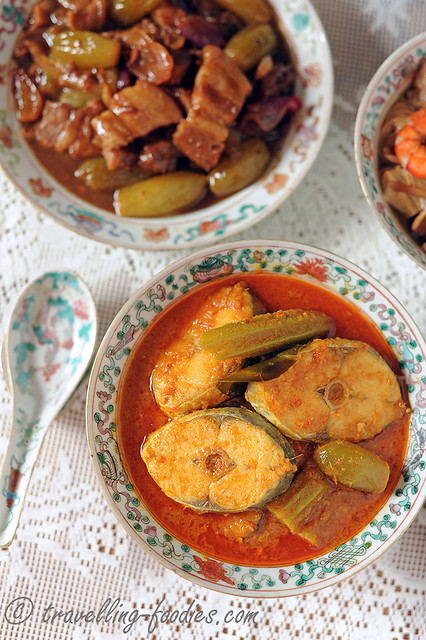 The preparation of the dish is divided into two parts, the preparation of the rempah, followed by a quick parboiling of the fish and accompanying vegetables in the simmering sauce. Usually the tangy component is due to the addition of tamarind pulp but when they are available, buah belimbing aka belimbing buluh is much preferred. Daon lemo purot i.e. kaffir lime leaves are added near the end of the cooking process to accentuate the aroma profile of the dish, just like how bunga kantan, i.e. torch ginger bud and daon kesom i.e. Vietnamese coriander leaves are added to the Malay version of Ikan Asam Pedas. But the latter two are generally not added to the Peranakan Ikan Gerang Asam.

This is a really flavourful dish, with the interplay of sour and spicy components whetting one’s appetites to no ends. If you are not careful, you would end up eating more rice than you should simply because the sauce goes so well with it. You have been warned! 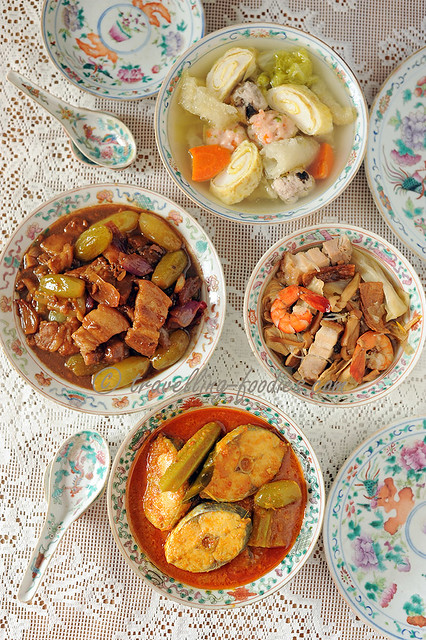 Method
(1) Pound or grind shallots and garlic until everything forms a fine paste. Dish into a bowl and set aside.
(2) Pound or grind the other rempah ingredients, i.e. candlenuts, lemongrass, galangal, tumeric root, red and soaked dried chilies until everything forms a fine paste. Dish into a bowl and set aside.
(3) Prepare asam juice by meshing tamarind pulp in 500 ml water with fingertips. Set aside for later use.
(4) Heat wok, add oil followed by garlic and shallots mix and slow fry in medium low flame until fragrant and translucent.
Add the other rempah ingredients mix and stir fry until the colour darkens slightly and the oil begins to separate from the cooked rempah. (about 15 to 20 min)
(5) Strain asam juice to rempah and discard the seeds. Top up with enough water to immense all the ingredients. Stir slowly and bringing mixture to a boil at the same time.
6) Add sugar and salt to taste, adjusting proportion to own’s liking and cover and simmer for about 5 to 10 min.
(7) Use the simmering time to prepare the vegetable ingredients. Remove the stalks of the buah belimbing. Cut the larger pieces of belimbing lengthwise into halves. Leave the smaller ones whole.
Remove the stalks of the okra, cut the longer ones diagonally into halves.
Remove the stalks of the eggplant and cut lengthwise into quarters and half each quarter diagonally into thick slices. Soak the eggplant slices in some water added with a pinch of salt if necessary, to prevent them from turning brown.
Bruise the kaffir lime leaves slightly by tearing the sides slightly. This will help to release more aroma and flavour into the sauce.
(8) Remove the cover and add brinjal, okra, buah belimbing, bruised kaffir lime leaves. Stir slightly and cover again to simmer for another 5 to 10 min until vegetable ingredients are just cooked.
(9) Add the slices of batang and make sure they are well submerged into the sauce. Simmer without lid for another 5 min. Turn off the flame and cover. Steep the fish slices in the sauce for another 5-10 min for the flavours to infuse into the fish.
(10) Check that the fish is thoroughly cooked, taste again if needed and adjust once more with sugar or salt as required.
(11) Serve with steaming hot rice and other dishes.