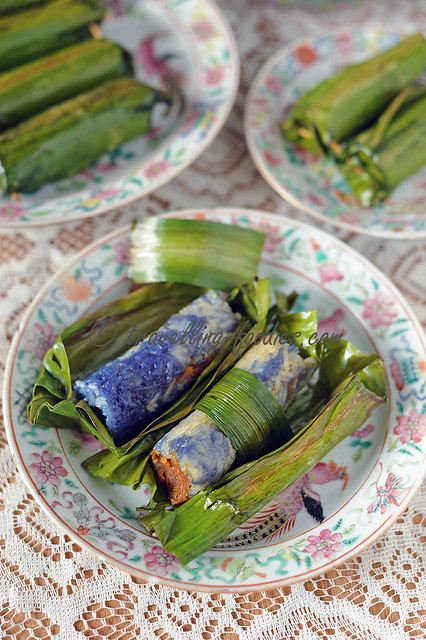 I would refrain from associating it too closely to the Peranakan rempah udang because some babas and nyonyas would be too quick to pounce on me for defiling this traditional kueh. *just kidding*

The Peranakan rempah udang likens the Malay pulot panggang which literally means “grilled glutinous rice”. But the baba-nyonya version, which is also known as “lemper udang” amongst the Indonesian Peranakan Chinese community, is different in many ways of course, most notably in the size of kueh, made much more dainty and “senonoh“. The use of bunga telang in the colouring of the rice and most importantly, the filling also makes this uniquely Peranakan. The filling for rempah udang is most curious as the recipe varies across families, with some I’d tasted that has a spicy edge while others are somewhat sweet with an assertive taste of ketumbair! Anyway, that is a story for another day when I get around to do rempah udang properly that is… 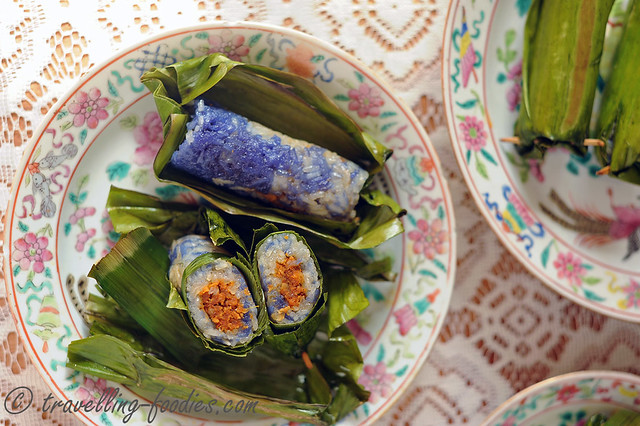 The filling I’d used is that of a spicy fish floss known to the Peranakans as Sambal Lengkong. I made a batch just before Chinese New Year and most of it went very well into sandwiches. I am down to my last few bottles and was wondering what I can do with them. To use them in a filling with glutinous rice seemed like a good idea. 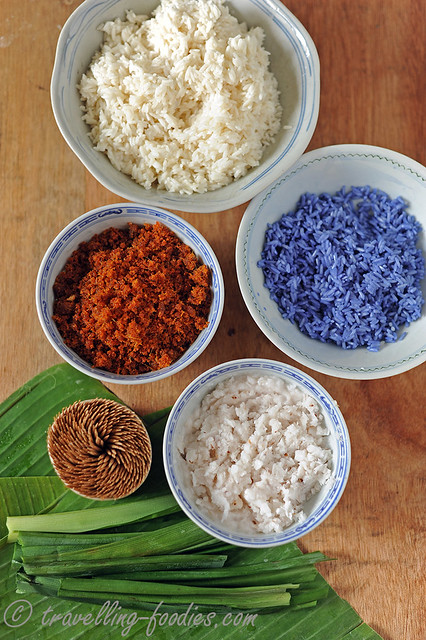 The name “rempah udang” is quite a misnomer. From what I was told, the earlier forms of rempah udang do not have used fresh prawns at all, compared to some “modern versions” we see nowadays. Some recipes have a bit of udang kering, i.e. dried shrimp added but otherwise it is mostly just klapa parot, i.e. freshly grated coconut. Being sold so cheaply in the past alongside those kueh cuchi mulot manis, I can imagine why prawns or even hae bee was hardly used if not at all. Anyway, I’d digressed yet again! 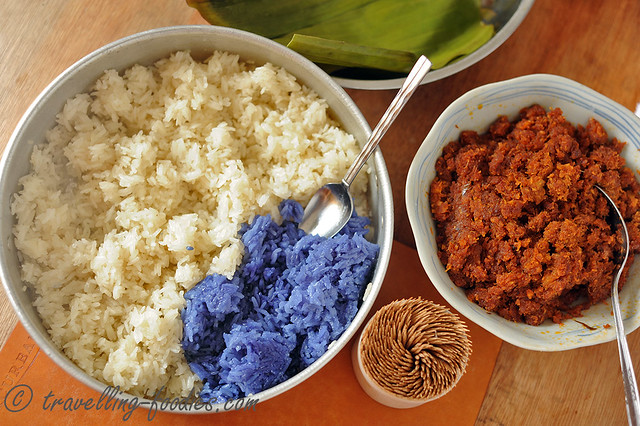 The glutinous rice is first soaked to reconstitute the grains. Traditionally, it is soaked in just water but I’d decided to soak this batch in coconut milk instead for the grains to take in the rich coconuty flavours more readily. The blue portion, which is about one-third of the total amount of pulot used is dyed with the juice of the blue pea flower which Peranakans loved to use in kueh making, known otherewise as bunga telang.

While the pulot is steaming, I fried the inti which is made of sambal lengkong, freshly grated coconut, some salt and coconut milk to amalgamate everything together and help to keep the filling moist. When the two components are done, they are left to cool down slightly before wrapping! 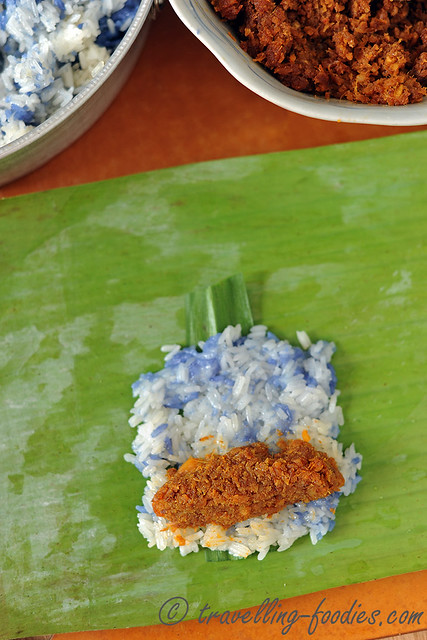 The way to wrap the “pulot sambal lengkong” is exactly as how one would have wrapped rempah udang in the traditional way. That would mean no staples please! The banana leaves are first cut to size and then wilted and softened slightly, either by passing them quickly over a stove or simply blanching in boiling water for a couple of seconds.

A piece of pandan leaf is placed in the middle of the banana leaf which helps to lend aroma to the kueh during the grilling. A small portion of the cooked glutinous rice is carefully laid over the pandan leaf, before adding a dollop of filling in an elongated fashion that helps with the rolling process subsequently. 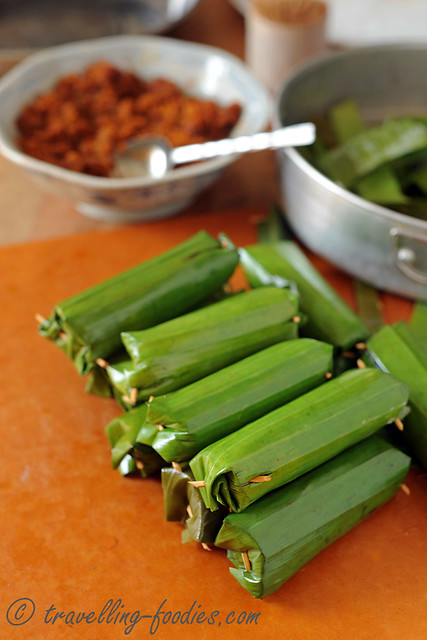 The rice is then carefully rolled to enclose the filling into a cylindrical shape before the excess banana leaves on both ends are trimmed away and secured with toothpicks. Traditionally, ‘lidi” is used, which is made from the hard spines of coconut leaves but we don’t have that at home of course. Bamboo toothpicks would do just fine but try not to use staples if you can. That kinda spoils it for me… 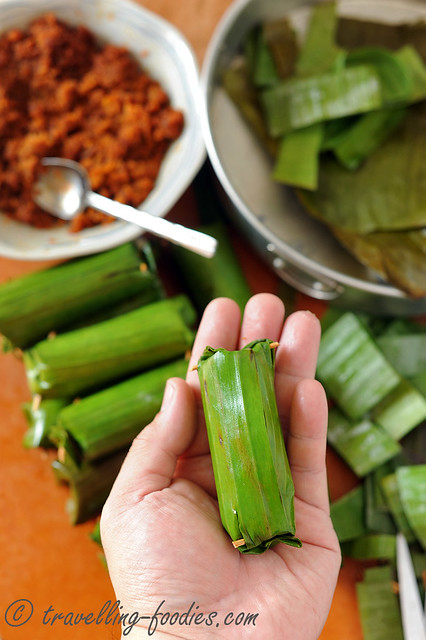 And this is what one pulot panggang sambal lengkong would look like, which have been fashioned to look like a Peranakan rempah udang. Each piece is barely finger length to make them really senonoh to be enjoyed in just a few small mouthfuls. My only grouse is that they are too fat by Peranakan standards. Too generous with the glutinous rice I must say. Have to go easy on the carbs next time! 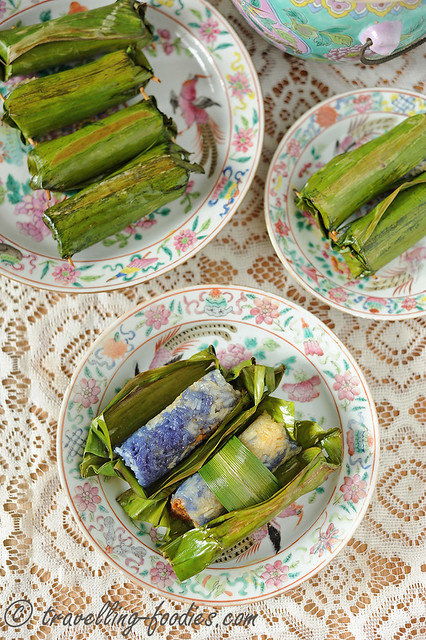 Method
Soak the glutinous rice in 150 ml of coconut milk added with salt for about 3-4 hours. If desired, separate 1/3 of the rinsed grains out and add a bit of bunga telang juice to the coconut milk to stain the rice grains blue.
Drain the soaked glutinous rice slightly to remove some of the coconut milk and steam at high heat for 20-30 min. Do not discard the drained coconut milk. Use a fork to fluff the rice during the steaming process. Drizzle some of the drained coconut milk onto the cooking rice if it is not soft enough.
While the glutinous rice is steaming, stir fry the grated coconut with sambal lengkong. Add the remaining 100 ml of coconut milk and continue to stir-fry until the liquids no longer show. The filling should remain moist nonetheless.
When the filling and steamed rice has cooled down slightly, wrap with banana leaves and pandan as demonstrated in the photos above.
Grill the glutinous rice rolls over a charcoal flame, or simply place them on a baking tray and grill them in the oven at 200C for about 10-12 mins until the banana leaves begin to turn glossy and show signs of charring and browning. The aroma of grilled banana leaves should be apparent. Remember to flip the pulot panggang over around the 6-minute mark for both sides to panggang beautifully.
Allow the pulot panggang sambal lengkong to cool down slightly before serving. 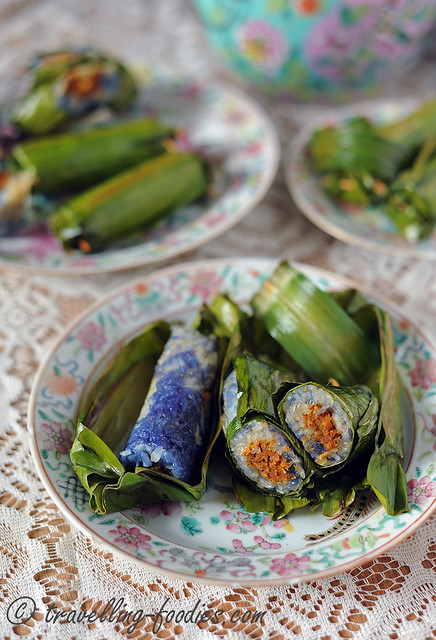