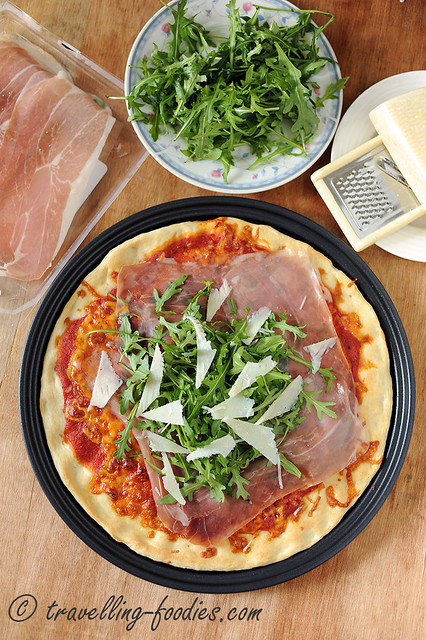 We love Italian food, pizzas, pastas, salatas etc… Compared to French cuisine, I have described Italian food to be more down-to-earth and homely. Pizzas have always been one of our favorite things to look out for whenever we dine out. But it boils down to the usual few joints. One of our favorites is a pizza deli located along East Coast Road. What caught our attention initially was how they had named their pizzas after donnabellas, lady names like Arabella, Rebecca, Juliana, Vittoria etc. Our frequent order is Isabella, a simple Pizza con Prosciutto en Rucola, i.e. Parma Ham & Rocket Pizza. And this was precisely what I had for lunch today. Only this time, it is entirely homemade! 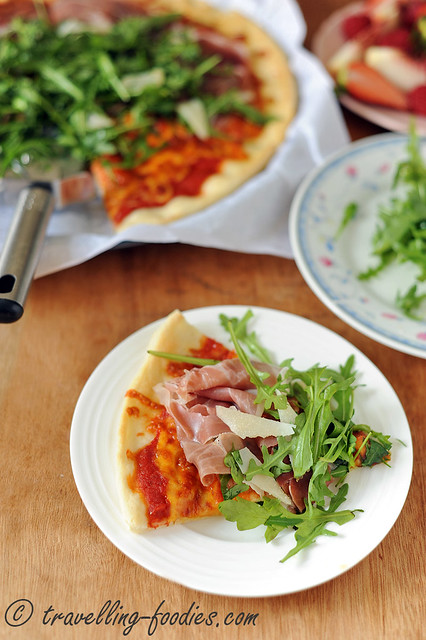 I love the combination of flavours in this classical Italian pizza. Sounds rather silly and redundant to call something “Italian pizza” it seems but there are other spinoffs, like Hawaiian Pizza of ham and pineapple, not forgetting the Japanese concoctions which are gaining popularity nowadays. I love the flavour combination of aged parma ham and rocket. I usually do not eat much rocket on its own in salads but its astringency works so well against the savory profile of prosciutto and also that of the cheese and Pomodoro base. Immensely flavourful, it is surprisingly simple to prepare at home! 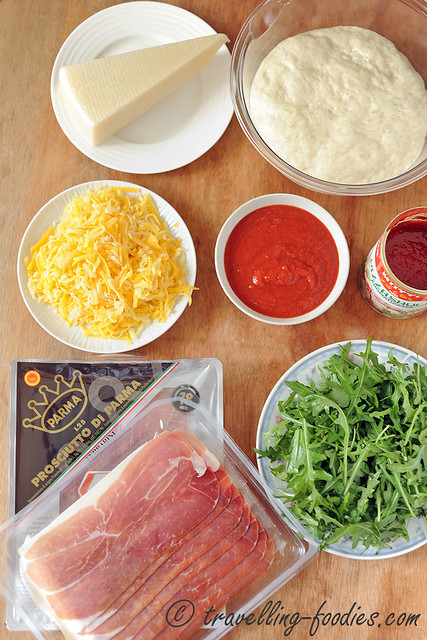 The ingredients are rather simple too. Just make sure one has got good parma ham, fresh rucola and not forgetting a generous of shaving of a good hard cheese like Parmesan or Pecorino Romano. I’d used the latter today because I have a good aged slab of this hard goat’s cheese at home and have waiting to create a dish that would do it justice. It was yummy! 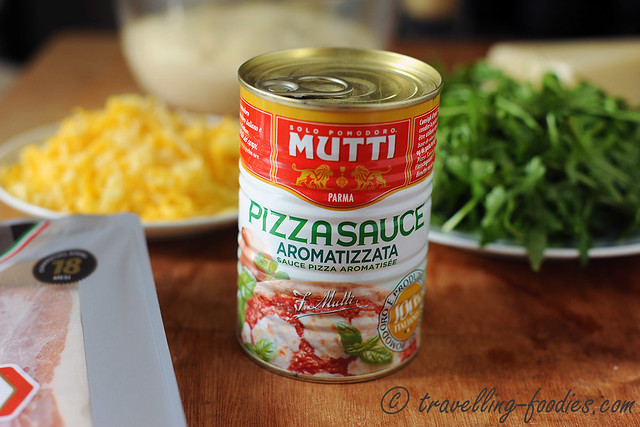 To make things even simpler, I didnt even bother cooking my own Pomodoro. Good beef tomatoes are rather pricey in Singapore to start with, and I am more than happy in this case to save myself the trouble with a can of good storebought Italian tomato sauce. There are the usual “popular labels” for pizza and pasta sauces out there in the market of course but I settled for this can of pizza sauce by Mutti which is incidentally also from Parma, Italy! Very affordable and a good balance of sweetness against the main sourish profiles that characterises a Pomodoro. 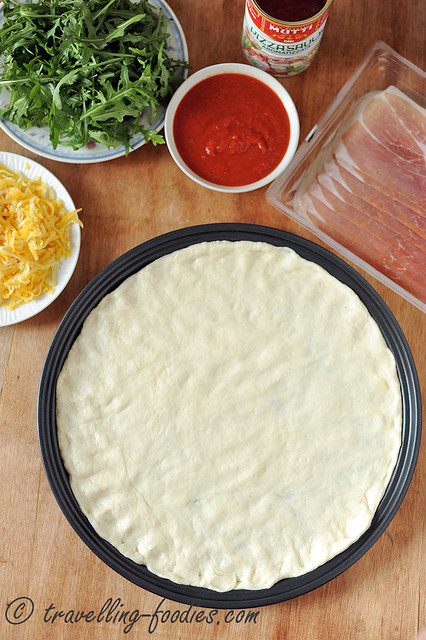 The process of building a pizza is rather straightforward. The first thing to do would of course to prepare the dough base and leave it to ferment for an hour or so for the yeast to do its job. Once the dough doubles in size and exudes that lovely aroma of fermentation, it is ready to be worked into a pizza pan. 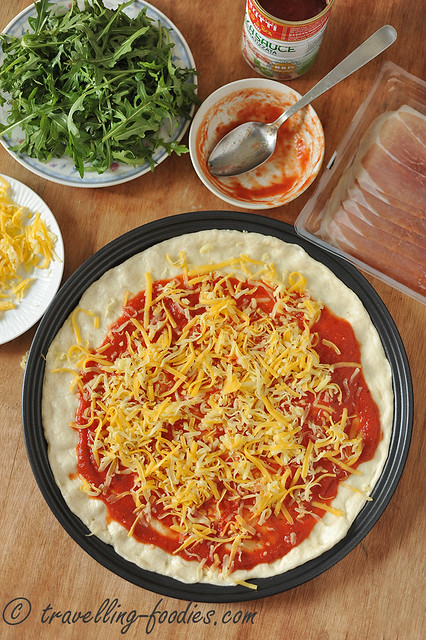 After that, it is just about spreading the top with a good amount of Pomodoro and a generous sprinkling of grated fresh mozzarella cheese. Traditionally, mozzarella is used but for today’s lunch, I’d used a mixture of mozzarella with red cheddar. Only 2.99 SGD for a packet which can easily go on 2 large pizzas! 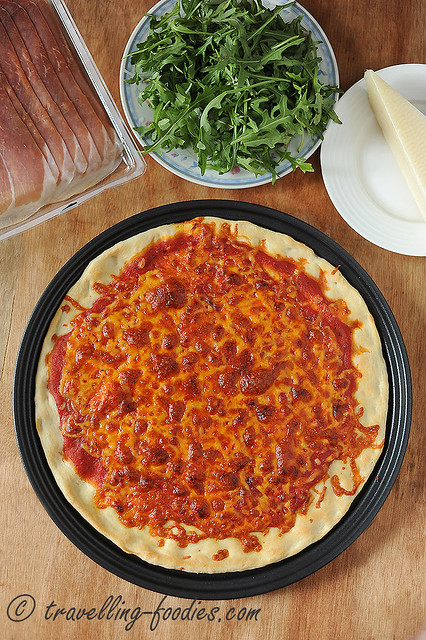 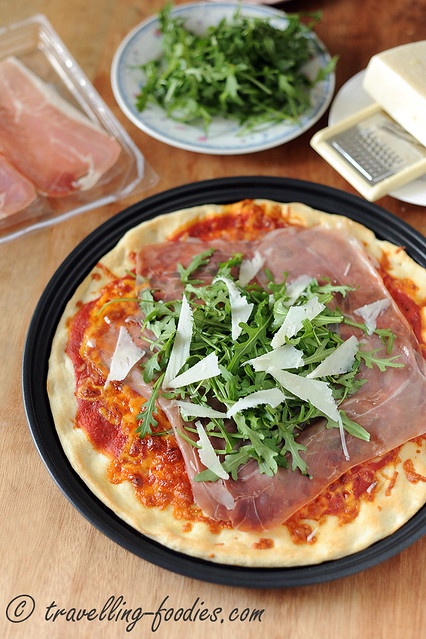 After that, it is just a matter of donning the top of the pizza with the slices of aged Parma ham and fresh rocket leaves, not forgetting a final grating of the Pecorino Romano. Buon appetito!

My oh my it was delicious… fresh homebaked pizza… what a way to start the week!

Method
Prepare pizza dough as stated in this recipe.
Place the fermented dough on the pizza baking pan
Press down on the dough gently with the fingertips starting from the middle and spread outwards to form a frisbee-like disc, leaving it slightly thicker to form a rim around the perimeter of the pan.
Spread Pomodoro sauce generously over the base until evenly coated, except for near the rim.
Top with a generously sprinkling of grated mozzarella cheese.
Bake the pizza in a preheated oven at 230 degrees Celsius for 12-15 min until the crust is beautifully golden brown.
Remove baked pizza from oven and allow it to cool for 1-2 min.
Arrange parma ham slices over the top of the melted cheese and cut into 6-8 wedges with a pizza cutter.
Top with fresh salad rocket leaves and freshly shaved Pecorino Romano.
Serve immediately.

This entry was posted on February 29, 2016 by Alan (travellingfoodies). It was filed under Food, Simple Eats and was tagged with arugula, cheddar, mozzarella, parma, parma ham, pecorino romano, pomodoro, prosciutto, wild rocket.