煮炒 “tze char“ is a very common culinary concept in this part of Asia. Analogous to the makeshift stir fry and noodle stalls in Bangkok and 大排档 Dai Pai Tung in Hong Kong, the term “tze char” is a kind of street food culture unique to Singapore and Malaysia. In Singapore, the popularity of  “tze char”  rose gradually after the post-war years and thrived all the way up to the 1980s when these pushcart stalls could be seen in practically most living quarters as well as areas known for night entertainment like amusement parks and cinemas. With the popularising of “HDBs”, these makeshift “tze char” stall owners abandoned their practice to deck out foldable formica-plastered tables and wooden chairs for al fresco dining every evening, and of course the need to brave through bad weather, pit their wits and avoid harassment from the “teh gu” 地牛, a colloquial term for government officers in charge of raiding illegal street hawkers, not to mention the collection of “protection money” from triads who were “in charged” of the “turfs” the stalls were located in. They made their way into the heartlands, and became “anchor tenants” of kopitiams while some of their names grew so big, like 肥仔荣 Fatty Weng and 香港珍记 Hong Kong Chun Kee that they were able to own the entire coffeeshops for themselves, while others went on to open their own restaurants. Depending on the culinary background of the 总铺 chong po or head cooks, one could order a wide range of dishes representative of different dialectal communities from these “tze char” stalls, from the more standard dishes like pai guat wong 排骨王,  frog legs with ginger and scallion stir-fry 姜葱田鸡腿, braised fish head 红烧鱼头 for communal family dinner eat-outs, or opt for takeaways of one-dish meals like mui fun 烩饭, yuet kwong hor 月光河, fried rice vermicelli “Singapore style” 新州炒米, and of course my favorite 煮炒福建面 Tze Char Hokkien Mee. 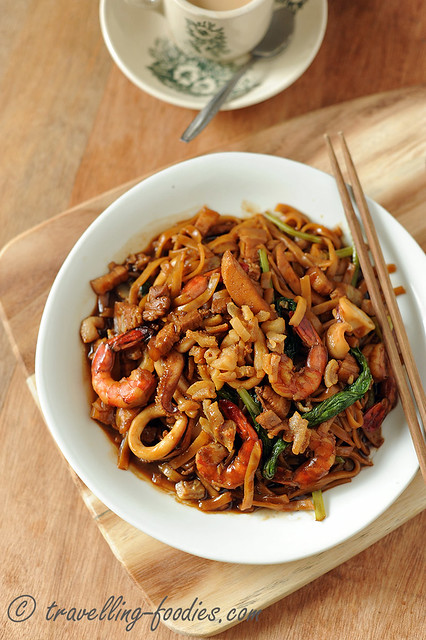 The term “hokkien mee” is a rather vague and misleading one, especially those who are not familiar with our local food fare. The name can represent quite a few dishes which have such similar names yet so different in appeal and taste! There is of course the “white version” of 福建炒蝦麵- Fried Hokkien Prawn Noodles  as well as a soupy version which also bears the name 福建虾面 as well! But the version offered at these “tze char” places has always been the “dark and black” version. Know where to order what and one would not get confused! 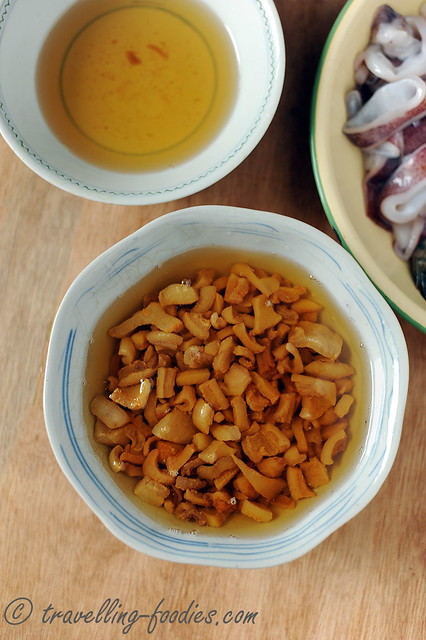 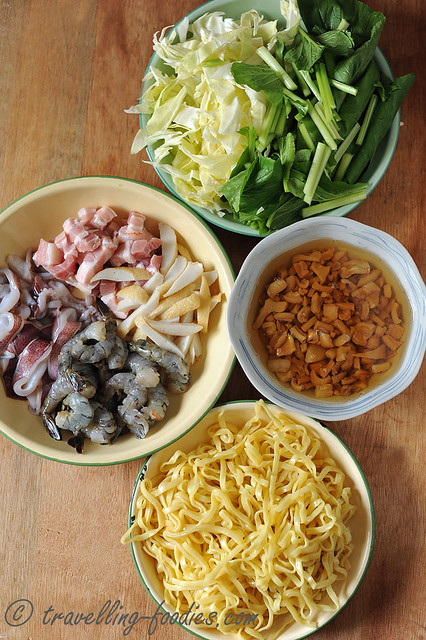 The local version of tze char fried Hokkien Mee is almost similar to the one well known  in Malaysia KL. One major difference lies in they choice of noodles. In KL, thick wheat noodles not unlike udon are used but here in Singapore, yellow flat noodles are synonymously associated with the tze char version of Hokkien Mee and are almost exclusively used for cooking this dish. Compared to the more common cylindrical yellow oil noodles, the flat ones seem somewhat more resilient to cooking thus allowing them to be braised for a slightly longer period of time.

The noodles and other ingredients are first fried under high heat and then braised for a while for the flavours to develop more quickly. A quick addition of cornstarch mixture as a thickener helps the flavorful sauce to clad better onto the ingredients and noodles. Just before serving, one simply needs to toss in another spoonful of bak yew pok and I am sure the Tze Char Hokkien Mee would be elevated to the next level! 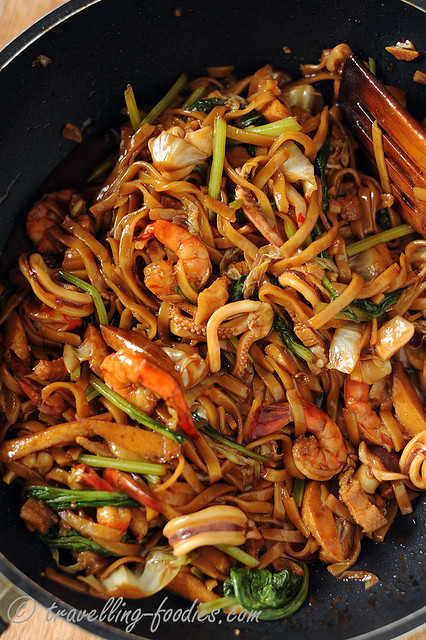 Method
First marinate pork belly strips by mixing well with light soy sauce, some pepper and corn starch in a small bowl. Set aside for 15 min.
To a heated wok at high heat, add lard oil and first pan fry pork belly quickly until the surfaces are slightly brown.
Add minced garlic and saute until fragrant.
Add sliced cabbage, chye sim stalks and sliced fish cake and stirfry to mix well.
Add noodles followed by pork stock, dark soy sauce, pepper, sugar and salt. Mix well, cover with lid and cook for 5 minutes.
Remove cover, add chye sim leaves and mix well. Cook for another couple of minutes with constant stirring until the sauce slightly evaporates and thickens.
Add prawns and squid rings, stir-fry for another minute or so until the seafood are just cooked.
Add cornstarch mixture and stir quickly to thicken the sauce a bit more.
Toss in crispy bak yew pok and dish up.
Serve immediately. 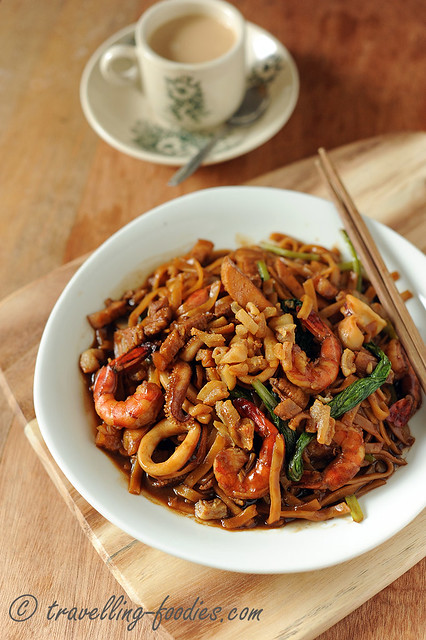