Homecooked lunches are usually kept very simple and fast, often with whatever ingredients there are in the kitchen. For today’s lunch, I’d basically prepared a simple Chinese fried noodles using the leftover ingredients I had from yesterday’s Peking Duck Pizza. It was super fast, all done within 20 min or so, minus the time I had to rush out to get another packet of noodles. Thank goodness I’d discovered that this during the mise en place and not when the ingredients are already in the wok. So here’s a super easy, super fast Chinese fried noodles. Always a lifesaver for a quick meal. 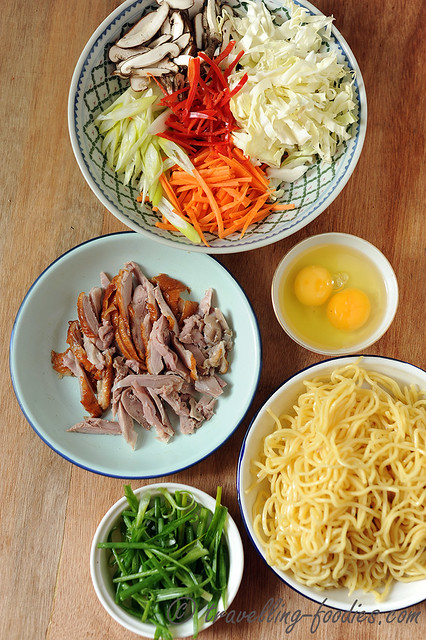 The ingredients were “foraged” from the fridge, most of it leftover ingredients from yesterday’s pizza making. Chinese leeks are in season now and they are sweet. Same with shiitake mushrooms with crackled caps owing to the dramatic temperature differences between day and night. The usual culprits are carrots, cabbage, spring onions, garlic and egg. There would usually be a leafy green in baby bok choy or choy sum and perhaps some beansprouts but I didn’t wanna get a packet of fresh vege just for a lunch, knowing that I’m not gonna be cooking much over the weekend. Oh yes, there is roast duck. Otherwise, it can be anything raw like sliced chicken or pork, or even leftovers like shredded steamed or roasted chicken. In short, it is entirely your call because its just meant for a simple free-style lunch. For something more elaborated, one can always do a Nyonya Mah Mee but not today… 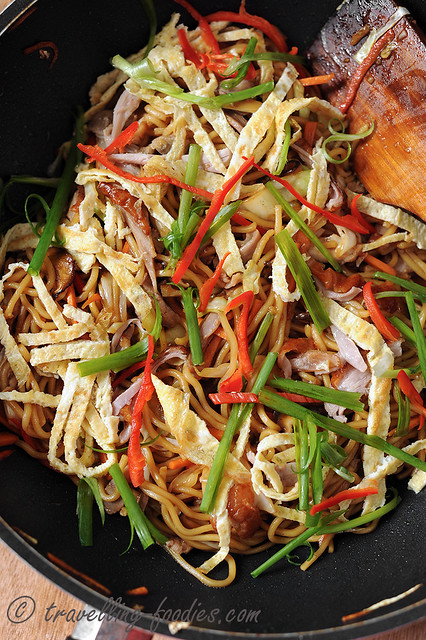 *if using raw meat, marinate with a pinch of salt, pepper, a tbsp cornstarch and set aside

Method
First make omelette by adding oil to heat wok, pour in beaten egg mixture and swirl wok around to form a thin layer. Flip and cook for another 20 second. Dish up and set aside. Cut into thin strips.
To the same wok, add more oil followed by minced garlic. Stir-fry under medium high heat until aromatic.
If using raw meat, it should be cooked now, dish up and set aside.
Add sliced leek, cabbage, carrot, mushrooms and half of sliced red chili together with any other leafy vegetables. Stir fry for 30 second before adding all the seasoning. Mix and coat the vegetables well.
Add noodles and stir fry evenly until every strand is coated.
Add water and mix well. Cover and cook for 30 seconds.
Remove lid and continue to stir-fry for excess moisture to evaporate.
Return cooked meat slices to the wok. If cooked meat like roast chicken or duck is used, they are added now. Same with beansprouts if adding.
Stir fry everything for another half minute or so and turn off the flame.
Garnish with sliced omelette, julienned spring onion, and remaining sliced red chilies.
Serve immediately. I like to serve it with a simple “achar puteh” of cucumber, red chilies and pineapple. And don’t forget the sambal! 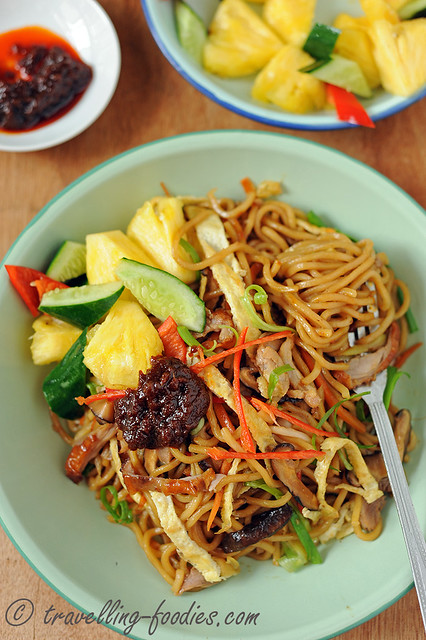