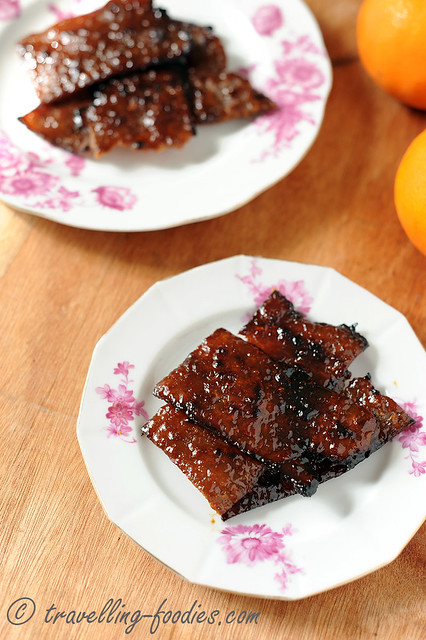 Chinese New Year is around the corner, just barely a month away and I’m sure many of you would have notice the “changes” occurring around, as the Christmas decor in the shopping malls in town undergone an almost overnight revamp or overhaul of some sort with the pine trees turning into cherry blossoms and mistletoes become red lanterns. It is also a time when homebakers and gourmands get really busy in the kitchen preparing all the Chinese New Year goodies and dishes for all the snacking and feasting to come during the festive season. One of the quintessential Chinese New Year snack which seems to be an absolute must for anyone and everyone is bak kwa, the Asian version of a meat jerky which is customarily made with pork but now we see versions of it made from chicken and beef as well. Very recently, I was very lucky to be given one set of the latest Samsung Smart Oven to play around with and the first thing that came to my mind was to make bak kwa with it! 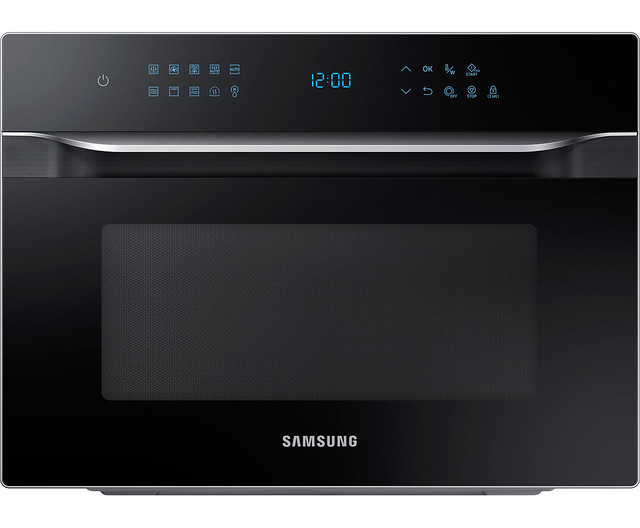 The new Samsung Smart Oven Model MC35J8088 is the latest model offered by the renowned Korean electrical and electronic appliance manufacturer. It is a markedly improved version over its predecessor which was launched around 2 years back. Built using the latest available technology in the market, the latest Samsung Smart Oven inherits all the wonderful attributes of the previous version, only that it is now even better. There is also a tremendous increase in the number of preset “smart cook modes” from the previous 25 to the current 55! Temperature range goes really low now, sufficient for one to make yogurt, dehydrate fruits and vegetables, not to mention go through the fermentation process in bread making which I can’t wait to try out! 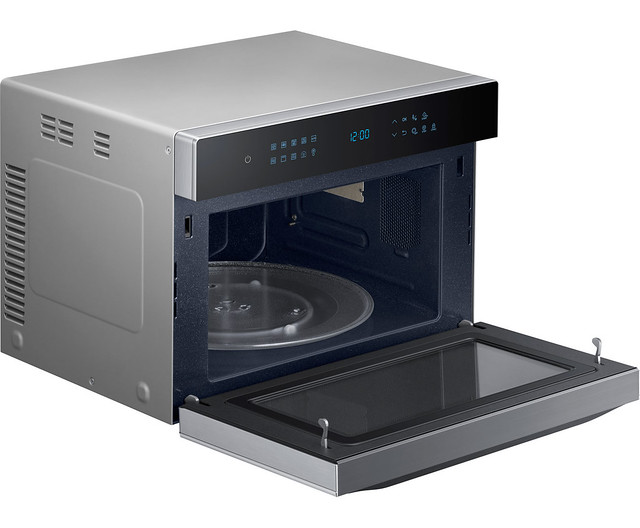 The latest Samsung Smart Oven is also bigger in terms of capacity, now 35 litres compared to the previous 32. Three litres may not seem a lot to some folks but in actual fact, it can be a lifesaver when one needs to roast a larger chicken or bake a bigger pizza to feed a hungrier crowd! The control panel has also been shifted to the top, while the oven door now opens downwards, both attributes likening a full fledged standard conventional oven, increasing in its professional appeal. 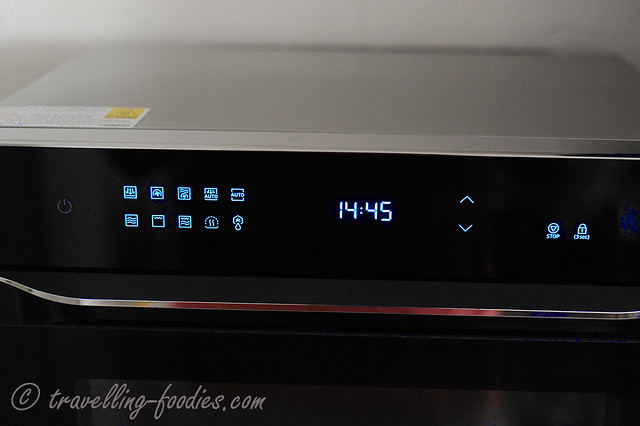 What I love most is the control panel which is fully touch screen now. The icons lit up upon turning on the oven and are really easily to comprehend and operate, even for a non-techie like me! 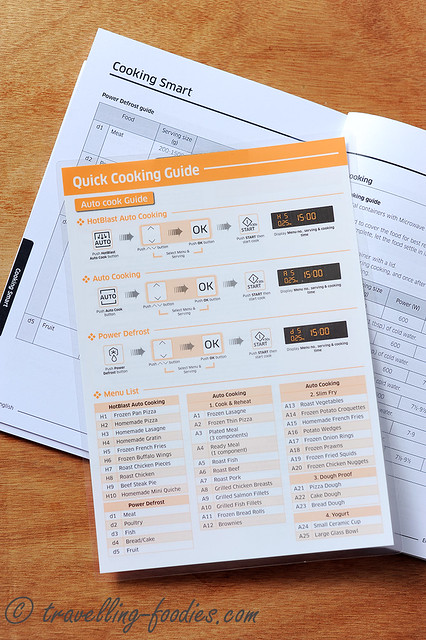 Apart from the comprehensive manual which explained very clearly all the possible cooking modes the Samsung Smart Oven is capable of conjuring, there is a laminated “Quick Cooking Guide” which serves as a quick reference. This is very thoughtful indeed… 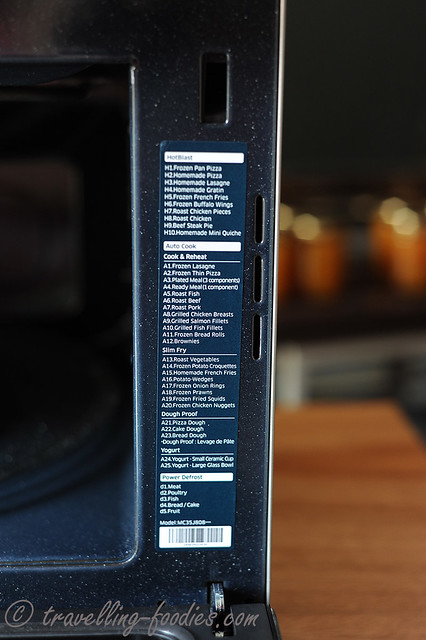 And as a “last minute reminder”, there is yet another condensed version located on the inner side of the oven door, clearly visible as one is ready to pop the dish into the oven. For the bak kwa, I am using the convectional oven mode for the dehydrating process, followed by the HOT BLAST mode, one of the “smart functions” of this new oven that helps to crisp up the food more quickly by introducing jets of hot air which promotes very uniform heat circulation throughout the oven. 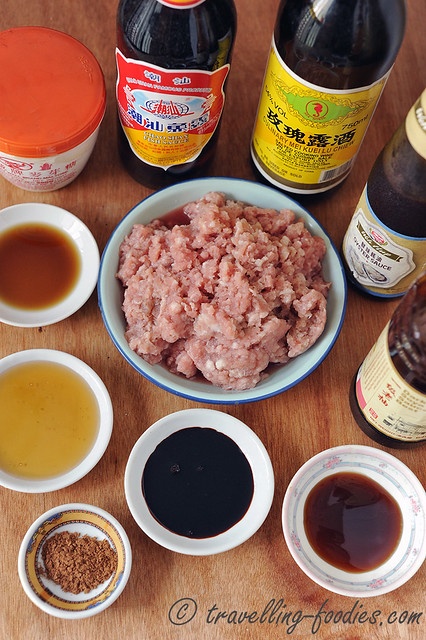 Here are the ingredients for the bak kwa. I’d decided to use a mixture of maltose (麦芽糖) and sugar in the meat which provides different dimensions of sweetness to the final product. Five-spice powder, despite its small quantities is a must and the same is said with Chinese rose wine (玫瑰露酒) which is subtly different compared to shaoxing or huaqiao wines. Oyster sauce (蚝油) and fish sauce (鱼露) is added as well to impart umami flavours while dark soy sauce serves to darken the meat and produce the characteristic hues which bak kwa is known for. One may notice by now, no artificial coloring is added thus resulting in the final homemade product being a shade more drab than the gaudily red commercial versions which might have been spited with lots of food dyes and nitrites. 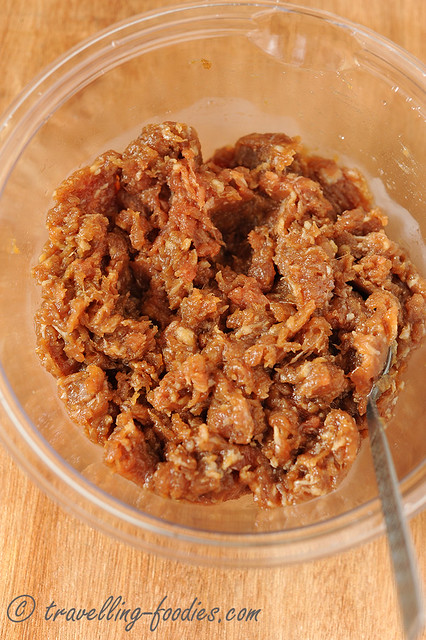 After the meat mixture is marinated in the fridge overnight, it is ready to be grilled in the oven. First, the marinated minced meat is flatten over a piece of baking parchment and placed into the Crusty Plate which comes together with the Samsung Smart Oven. It is wonderful to be used for pizzas and also as a grilling tray for roasting chicken as well! 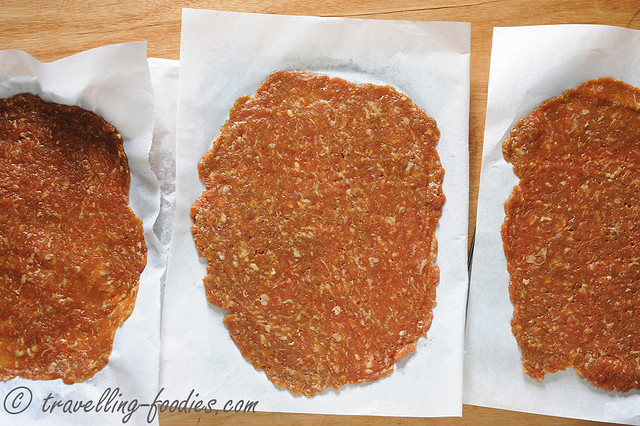 The cooking process is two-fold, the meat is first partially cooked and dehydrated at a lower temperature. One must be sure to drain all the juices which has pooled around the thin slices of minced meat after the first process. The partially cooked meat are then cut to desired size before being laid over a new sheet of baking parchment. It is important to change the baking parchment as a wet piece will hinder the grilling process of the meat prevent them from grilling and crisping up properly. The meat pieces are then glazed with a maltose syrup and grilled at a higher temperature. The bak kwa made can be stored once they cool sufficiently to room temperature. Resist the temptation of eating them as they taste so much better when left to “settle” and mature for a day or two. 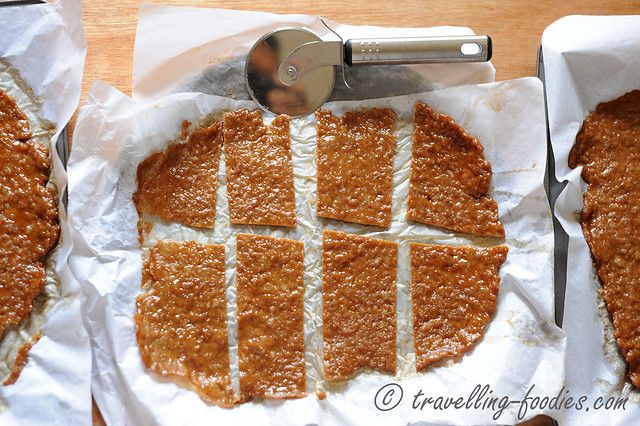 Method
Mix all the ingredients well and marinate overnight in the fridge.
Divide the marinated meat into three portions.
Spoon one portion of the meat over a piece of parchment. Place another piece of parchment over the top and press down with your palm or the keel of your hand until the bak kwa mixture spreads to the appropriate thickness (about 3 mm) over the parchment. Do not use a rolling pin or the minced meat would be too compact which produces a rather tough and hard final product. And do not roll too thinly or the bak kwa would crisp up too much and even char too quickly during grilling.
Place it on the Samsung Smart Oven Crusty Plate or baking sheet and carefully peel off to remove the top piece of parchment.
Bake the minced meat using CONVECTION OVEN mode at 140C for 15 min.
Remove the Crusty Plate from the Smart Oven and carefully drain off all the juices collected around the sides.
Cut the partially cooked meat into appropriate size as desired using a knife or pizza cutter. Do not cut them too small or they will burn easily on the edges.
Repeat the process for the other two portions of marinated minced meat.
Lay a new sheet of baking parchment into the Crusty Plate and place the cut meat slices over it.
Grill it under “HOT BLAST” mode at 200C for 7 minutes.
Remove the Crusty Plate from the oven, flip over the meat slices, glaze again and continue to grill for another 5 to 7 min under same HOT BLAST setting, depending on one’s liking on the degree of charring on the sides.
To finish off for a glossy look, flip back onto first side and apply a thin layer of maltose glaze and grill for one minute, repeat for the other side.
Remove the meat slices and set them on a rack to cool down.
Repeat the process for the other two portions of meat.
Store the bak kwa slices after cooling down to room temperature in an air-tight container and leave to settle for at least a day for flavours to mature before enjoying. 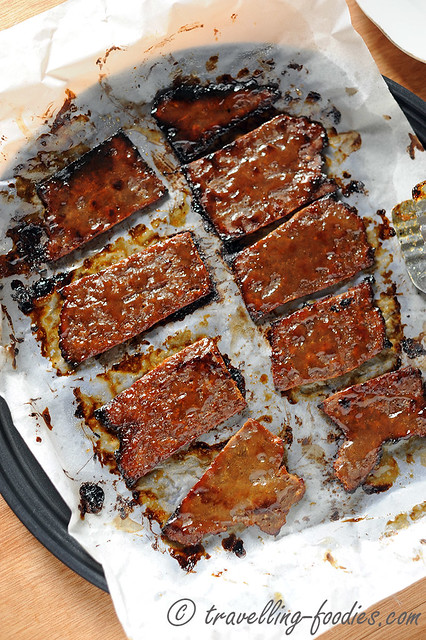 remove from baking parchment once the bak kwa is done and transfer to a cooling rack…
I imagine you can make “flavoured” bak kwa using this as the basic recipe as well. Like “Chili Bak Kwa” by adding a tbsp or two of rempah into it, or even a citrusy version by adding some orange, lemon or even yuzu zest! 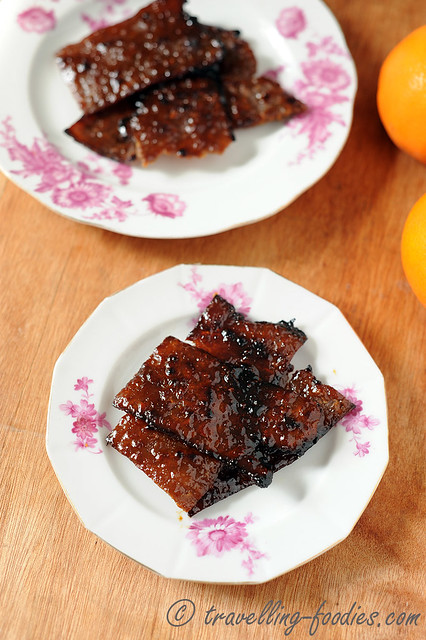