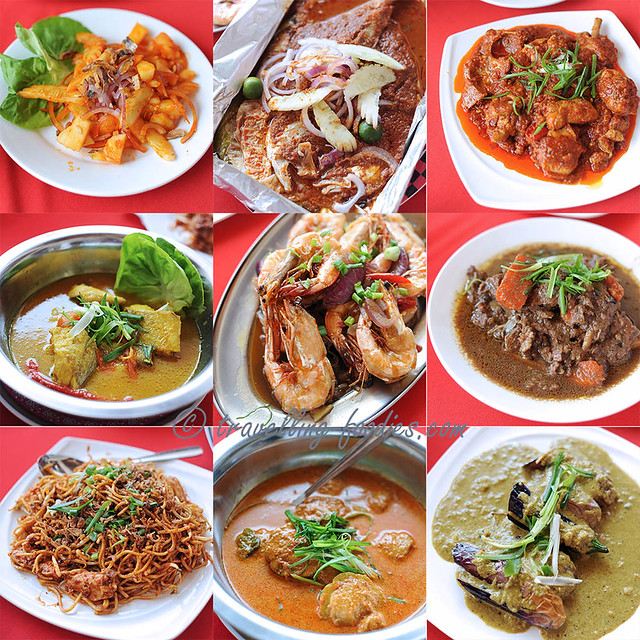 Lesser known and often cast in shadow however, was the colonisation of Melaka by the Portuguese around 500 years ago, from which yet another unique community emerged which is known to some as “Cristangs” owing to their embrace of the Catholic-Christian faith that spread to this part of the world with the missionaries that came, or otherwise, simply as “Portuguese Melakans” honouring the special bond forged between the earliest European settlers to this part of the world and the local folk. An extraordinary culture developed as a result of this interaction, and of course, a cuisine which conglomerates all the different elements that arise out of this remarkable exchange that spanned more than a century. On our recent trip to Melaka, we were given a good introduction of this interesting cuisine through dining at Big Ben’s Restaurant Cafe located in the Portuguese Settlement in Melaka, a luncheon which I would fondly remember for a long time to come. 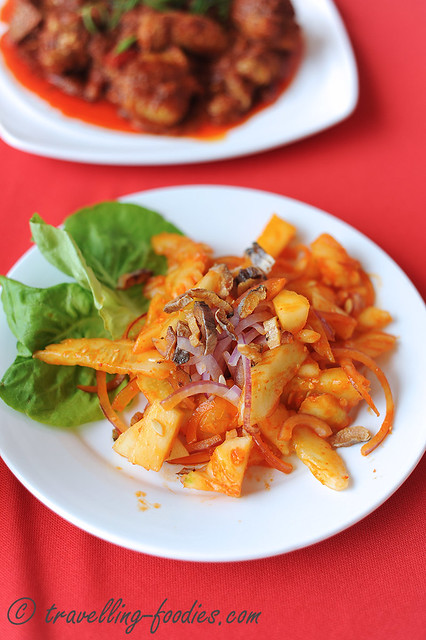 Big Ben’s Restaurant Cafe is situated within the premise of Lim Kok Wing Academy of Creativity & Innovation, nested right in the heart of the Portuguese Settlement in Ujong Pasir, Melaka. This place is the largest communal housing project for the Portuguese Melakans diaspora, with some smaller sporadic ones formed elsewhere in the Peninsula like Kuala Lumpur. I was taken on a car ride into the Portuguese Settlement once by a friend who pointed to me some interesting aspects of their houses and of course the people themselves, Little did he know that we too have a similar community in Singapore, known locally as the “Eurasians”. But to sample their authentic cuisine is definitely a first for me, and what a spread it was! Surely one of the notable highlights in my recent trip, apart from putting up at the luxurious Casa Del Rio Melaka of course!

We were served a refreshingly cold gingery concoction known to the locals as “jibe“, traditionally prepared by the wives for their husbands to warm their bodies after a day out battling the waves for a good catch at sea. It is good for what we Peranakans know to “buang angin“.

Then an appetiser, “Sambal Pipinyu“, which is essentially fresh cucumber slices tossed in a chili-based concoction. While the dressing was fiery enough, it could probably do better with an edge of sourness to kick up one’s appetite. That said, I love the little crunchy morsels of deep-fried salted fish sprinkled on top! It is worth noting that the name of dish is itself an interesing coinage, with the word “sambal” being essentially Malay while “pipinyu” is a colloquial Portuguese Melakan term for “cucumber” (pepino). 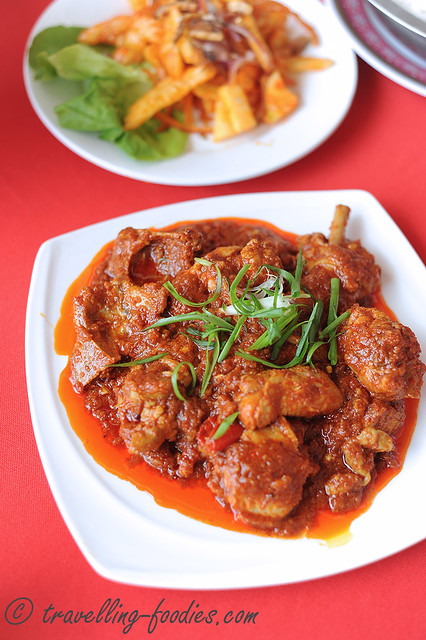 Then comes the signature of Cristang cuisine, Curry Debal. It is incidentally also a personal favorite! The dish was very well prepared with sufficient levels of spiciness to get the engines runnin’, yet the chicken was still beautifully tender, well from the choice of drumsticks and thigh. Known to many as “Curry Devil or Devil’s Curry”, owing to the level of heat this dish lends, it is definitely a dish one would want to order here at Big Ben’s. 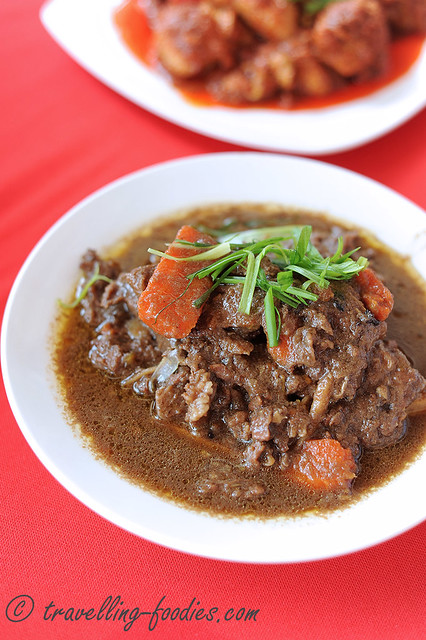 Beef Semur is yet another classical Cristang dish. The sauce was adequately flavoured and very moreish, which begs one to go for second helpings of rice just to enjoy more of the sauce! I would have prefer the beef slices to be softer and more tender, from either a different cut or prolonged stewing. But the dish by itself is quite good as it is. 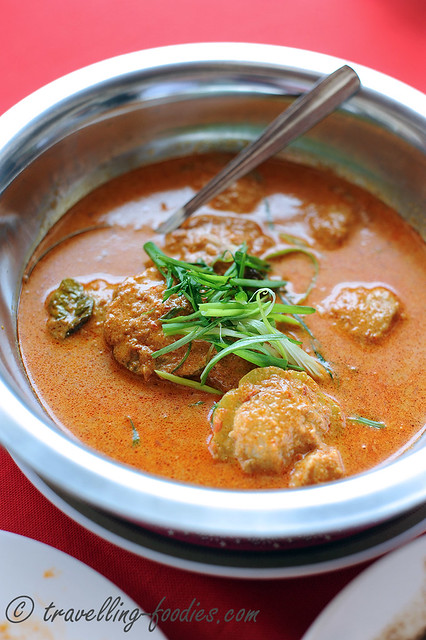 Inchi Mintu is a dish with rings of bitter gourd stuffed with fish paste and then cooked in a rich and slightly spicy coconut milk based sauce. This dish is commonly cooked by the locals on Fridays, when the Catholics abstain from meats and consume only fish. Though the bitter gourd-fish paste pairing reminds much of Hakka yong tau foo, the sauce however is surely unique to this region of the world, bearing elements which is not unlike the “Masak Lemak” style Malay-Peranakan cooking. The slices of of stuffed bittergourd are well stewed in the sauce, which once again is where the magic of this dish lies. If one is not careful, one would most certainly end up eating more rice than one should just because the sauce is so delicious. 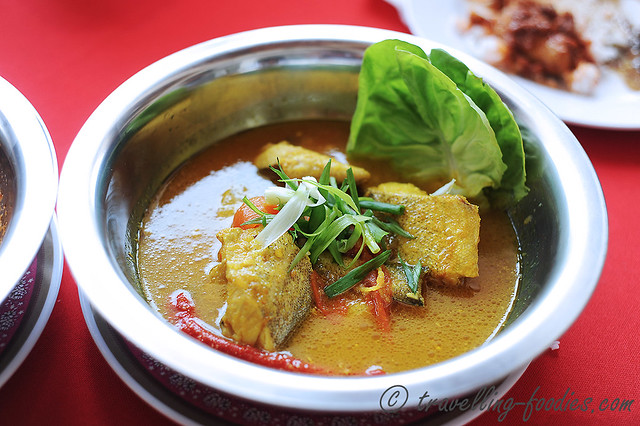 Fish Curry Maraydoo is yet another coconut based curry dish. “Too much curry?” one may start to think? But the sauce is yet different. This has a slightly tangy edge to it, not to mention a lovely mild aroma to it that makes one just wanna finish up the sauce. The fish was fresh and succulent from just being cooked but like the many dishes above, it is the sauce from a well-seasoned rempah that breathes life upon it. 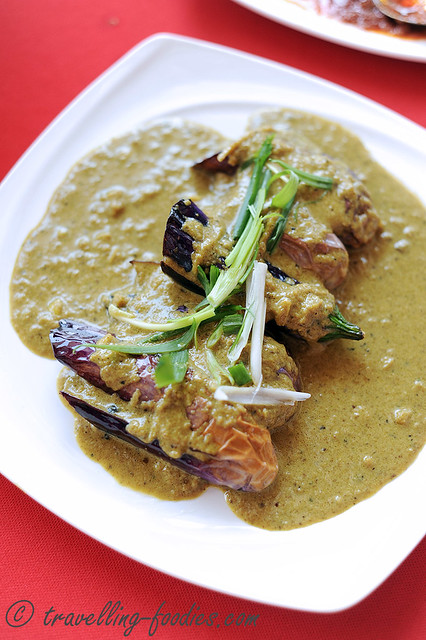 Mulyu is a lovely brinjal dish where the sliced brinjal first went through hot oil until they are just cooked and nicely softened but still having a lot of bite actually and not mushy at all. They are then drizzled over with a thickened sauce loaded with much piquant and somewhat peppery flavours. This too was very well received amongst fellow diners from the media. 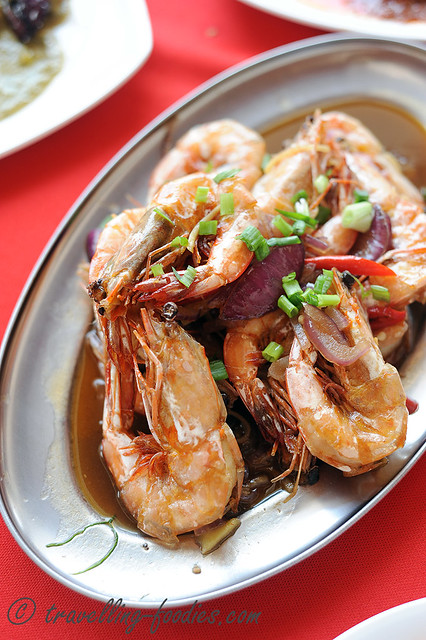 Kambrene Tambrinyu which is essentially “Prawns in Tamarind Sauce”. Sounds like the familiar “Udang Asam” but it is not. The prawns were first deep fried under high heat in a blitz to seal the juices within the meat, making each bite really luscious. They are then tossed into a prepared mixture packed with so much flavour from the different components that went into it. The main taste of the dish is of course the sourish hues from the tamarind pulp but there is also a sweet tone from sugar added to balance as well as spiciness from the chilies. One can’t help but to draw parallels to a Peranakan “tempra” dish, tasting somewhat similar, and is of course Portuguese inspired as well.  The linguist in me also noted the slight vowel shifts in the colloquial word for tamarind as “tambrinyu” for the Portuguese Melakans, while it is pronounced with more open vowels in the Singapore Eurasian form as “tambreyno“. I was also told that the tongue which is spoken by the Cristang community in Melaka now is in fact modelled after “old Portuguese” which is no longer spoken even back in Portugal anymore. 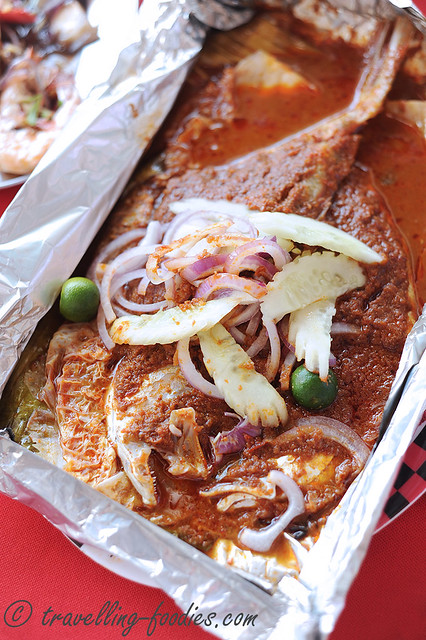 Portuguese Baked Fish, is very standard Portuguese Melakan fare which one would find being served at all of the close to a dozen small restaurants around the Portuguese settlement. It uses snapper for the much coveted sweetness in the meat. The whole fish is “butterflied” and baked in a sambal mix as well its own juices. Though this is how it is traditionally prepared here in Melaka, I would have preferred a meatier fish for this dish, like stingray instead. 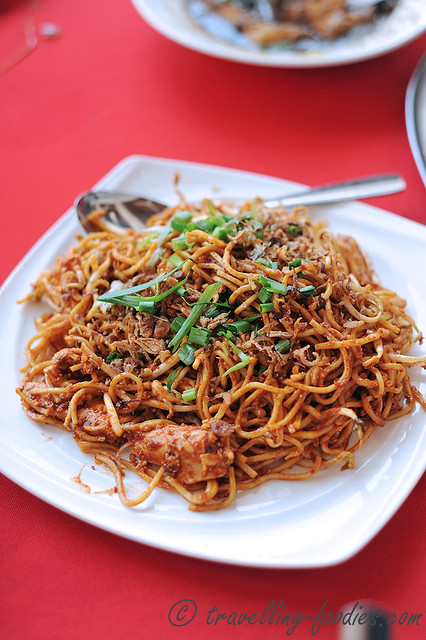 We had spicy fried noodles towards the end of the entire course, which was blessing and a curse. We were glad that this second dosage of carbs came later or we would not have enough stomach space to down all the yummy dishes earlier, yet at the same time, we lamented that the noodles were so yummy yet we are all filled to the brim already by then to have enjoyed it properly! There were generous chunks of chicken and some seafood in it, while I especially love the spiciness in the noodles, and more importantly the smokey hues aka “wok hei” it has from the quick frying process under high heat. I also enjoyed the rawness in the bean sprouts, which was added only a spilt-second before finishing up the dish, using only the residual heat from the strands of noodles that engulfed them to cook the sprouts ever so slightly for them to remain really crunchy, just the way I love them. One thing though, which I felt the dish could probably do with, is for the noodles to absorb a tad more stock for them to plump up slightly to become more springy and slurp-worthy. But it was very very delicious as it is. 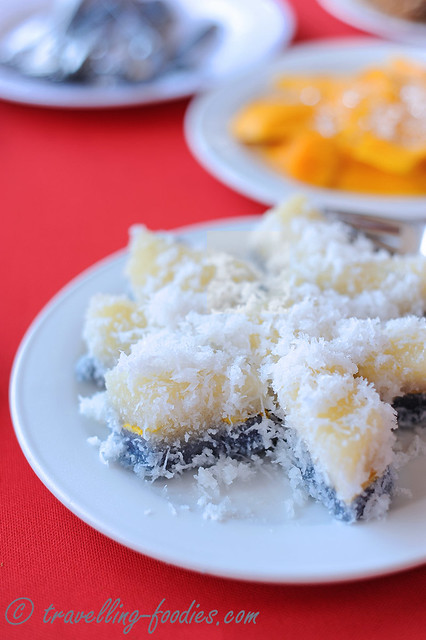 Portugul d’ Yami Manggala which is otherwise known as “Putugal” or “putu tegair” to the Peranakans is served as a dessert. This is one of the many desserts commonly shared amongst the proximal Peranakan Chinese and Cristang communities. It is essentially grated cassava which had been mixed with coconut milk and sugar, to be steamed with a layer of sliced bananas sandwiched within. It is then cut upon cooling before being robed with steamed grated coconut. The bottom layer was coloured blue by the extract of bunga telang. This is a dessert which we hardly get in Singapore anymore yet interesting, within just a short span of two days in Melaka, I’d eaten it twice, just a night before as supper in Casa del Rio Melaka and now here at Big Ben’s! What a treat it was! 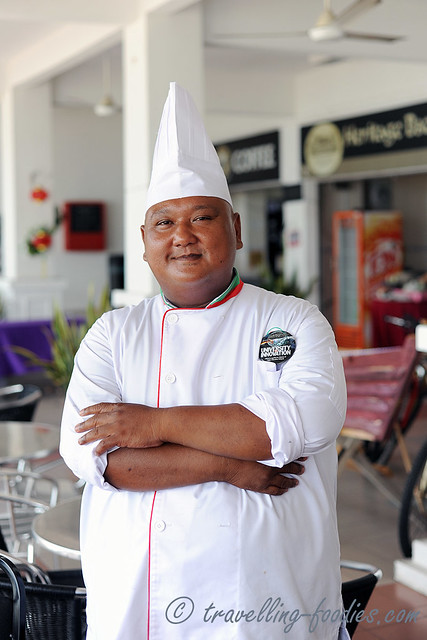 And finally we met Chef Benildus himself! A very hearty and jovial fellow who whipped up all the yummy dishes which we enjoyed tremendously that afternoon at the Portuguese Settlement with his team. It was a really delicious spread which truth be told, came as a wonderful surprise. The standards rivaled with and I would dare say, surpassed many of the famed Peranakan restaurants in town. I would most certainly be back again to sample more of Chef “Big Ben”‘s Portuguese Melakan dishes! For now, obrigado Chef Big Ben!

A big thank you to HPL Hotels and Resorts for this media invite, and Agnes from Casa Del Rio Melaka for arranging wonderful lunch.