For our recent trip, we stayed at a hotel which offered breakfast, serving croissants, scones and my favorite fruit conserves, which we have no reason to refuse. So our dimsum breakfast plans in our itinerary were conveniently shelved. But fate has it that we should be in the Mongkok area when it suddenly poured. Determined not to be deterred by the wet weather, we opted for a contingency plan, one which involves eating but of course! I remembered that there is a Tao Heung outlet near where we were and a quick navigation over GPS confirmed that we were in fact just steps away. So dimsum breakfast we were meant to have, nicely worked out to be dimsum lunch instead! 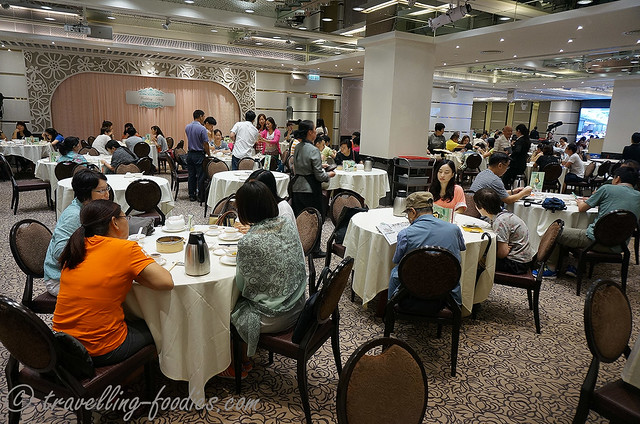 Tao Heung is an F&B chain which has many many restaurants all over Hong Kong. They serve dimsum by day. alongside some popular local dishes like roast goose, steamed rice in bowls which are known locally as 盅饭 around noon time, before becoming a full-fledged restaurant with the usual Chinese banquet fanfare and seafood which Cantonese cuisine is much known for, at night. We had Tao Heung for quite a few times now during our previous trips, but usually at the joint just next to Nathan Hotel in Jordan. The standards were pretty much consistent, serving above average dishes which were good enough for us. The place is immensely popular amongst locals, one of the rare places in downtown Hong Kong where their numbers outrun the Mainlanders!

The dining ambience here is also quite lovely. Despite being popular amongst the heartlanders, the decor is unlike what one would find in those old school joints like Lin Heung Lau or Fung Shing Restaurant. However, be prepared to have to go through the customary “dimsum rituals” as you would expect in other joints, i.e. to share tables with strangers known colloquially as to dup teoi, or to bear with some “roughness” as part of the exchanges amongst the locals. Perhaps this is what makes the entire experience truely Hong Kong. 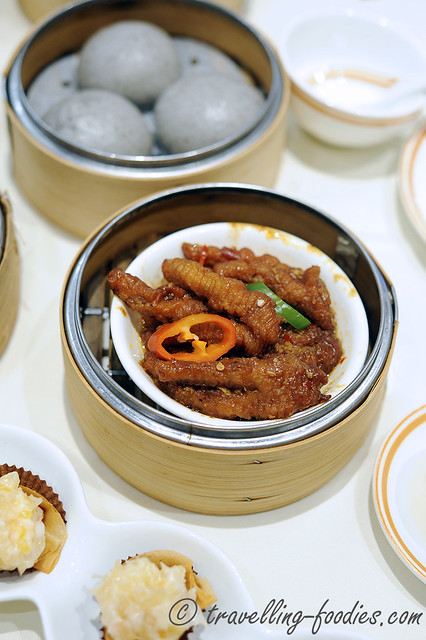 As usual we order the staples, using them as a litmus test for this joint. Braise Chicken Feet  are my absolute must-orders in whichever Chinese restaurants we patronise that have them on their menus. The skin must be perfectly fried before being braising them in a sauce filled with piquant flavours of savory, sweet and a slight hint of spiciness. The skin of the feet remained soft and gelatinous, slightly chewy just the way I like them but deboned so easily but the nimble actions of the tongue and the teeth. A must-order. 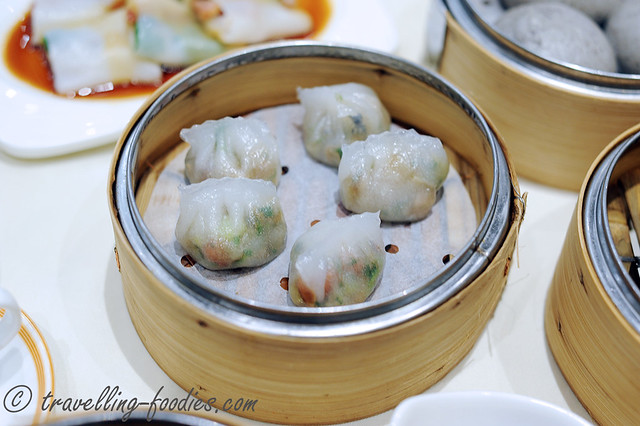 Teochew Steamed Dumplings is something which I would also try, as how well the skin is made bears testimony to how skilled the dimsum chefs are here. Regrettably the skin is a tad too thick for my liking, though the filling was delicious from a concoction of yambean, chinese celery, roasted peanuts and dried shrimp. Ok to order if you had not had 潮州粉粿 before but otherwise, you may choose to skip as there are better ones elsewhere. 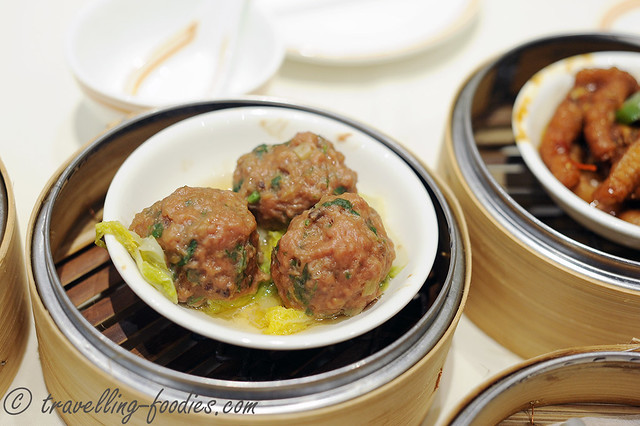 Minced ground beef balls are such a common fare as part of the dimsum regalia but it is not easy to find a good one, as far as we are concern. The beef balls must be uber succulent for them to be really tasty, achieved usually by incorporating some gelatinised stock into the minced beef alongside some starch to tame the textures. The trick lies in the amount of starch to use and when one gets too zealous with it, the beef balls would become too soft and lack bite and hence character. Balance is key for this dish and the rendition served at Tao Heung is interesting because aged tangerine skin is added for the oomph. The aroma is unmistakable and I love it! 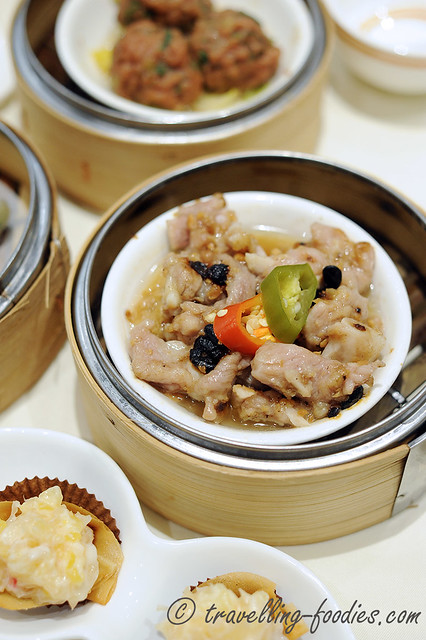 Steamed Pork Ribs is yet another must-order for us. The morsels of pork ribs, usually embedded with soft bones are quite a delight to savour. Sometimes, I would order a bowl of rice just to go with the residual sauce at the bottom of the small steaming plate. Tau Heung’s steamed pork ribs was slightly better than some places which we’d tried this but I felt the seasoning was a bit too heavy-handed for my liking. 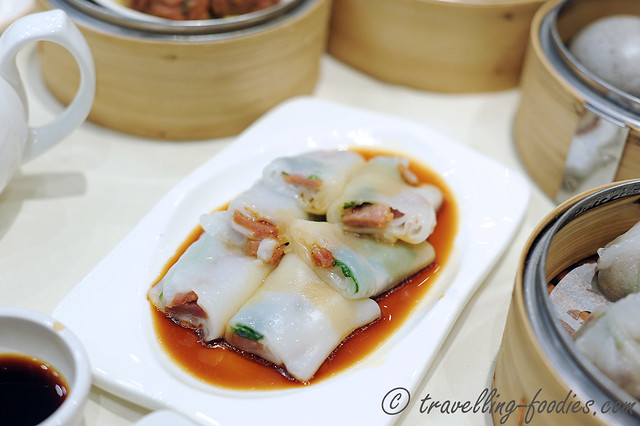 Cheong Fun is quintessential to dimsum eating as it is usually only made and steamed upon ordering. The freshly steamed rice sheets at this Tao Heung joint was unfortunately rather disappointing. The cheong fun was too thick and somewhat hard. The filling was also not as generous as what we’d had at other joints before. Let’s just hope that this is a one-off incident. 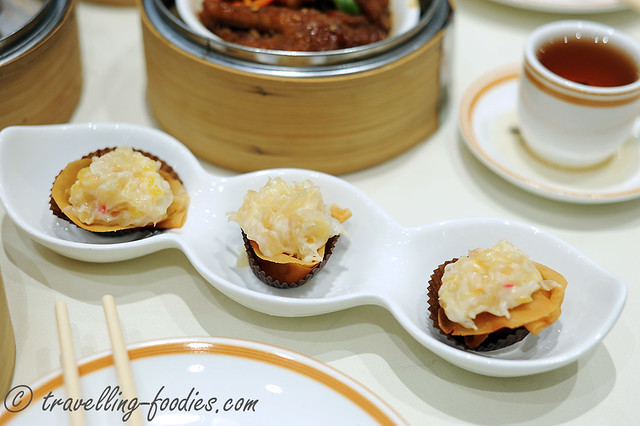 The fried shrimp wanton came as a surprise. Fried items are J’s favorites and we would invariably order one dish or two of such. The fried shrimp wanton which we’d used to have at Tao Heung was dramatic, with the skin wrapping made from just flour and eggs are much larger than the shrimp it contained. They seemed to have changed their style and made the servings more “compact” instead with a smaller piece of skin. Instead, the fried shrimp wantons were jazzed up with a pomelo pulp and mayonnaise dressing which I love! The sudden bursts of citrusy zing from the pomelo pulp was much welcomed, and the amount of mayonnaise used was just about right and not cloying. Let’s hope this stays on the menu! 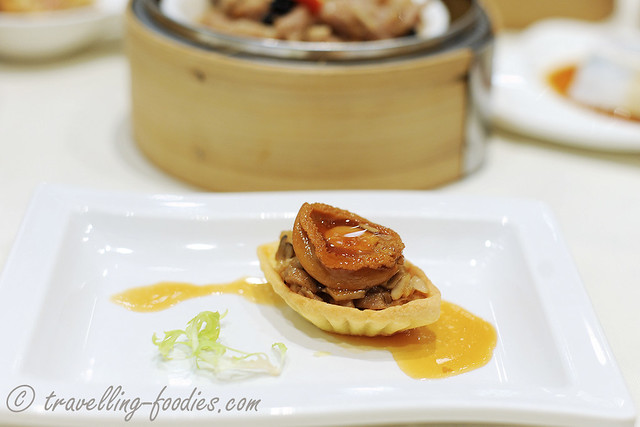 Out of novelty, we ordered two items which we wouldn’t have otherwise. First was the abalone tart. Probably a spinoff of the michelin-starred Lung Hing Heen’s famed piece and we see this on the menu of other dimsum restaurants suddenly over the last couple of years. It was a “premium” item on the menu and markedly more pricey than the standard dimsum fare which we would normally indulge in. Unfortunately, the quality did not match up to the price. The baby abalone was not properly braised. It reeked somewhat of a fishy taste and was too chewy to be enjoyed properly. Lesson learnt, to stick to the standard menu instead! 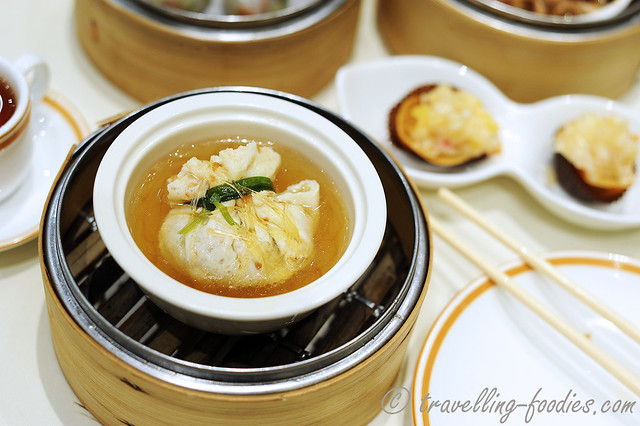 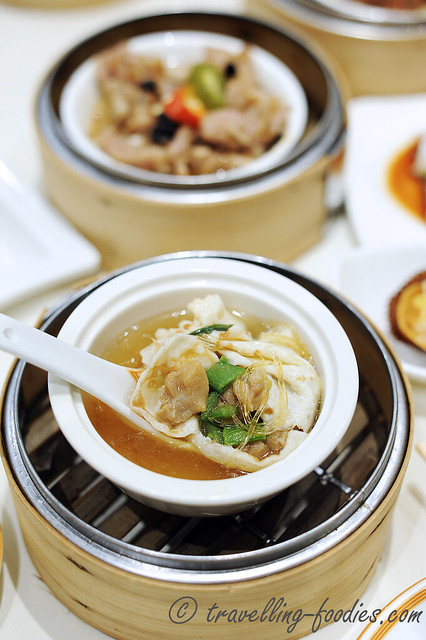 I know I should not be saying this, but the soup was thoroughly enjoyable and so was the dumpling. I particularly love the crunchy textures from the chopped pea pods within. The broth was also well flavoured. Would I order it again, probably not since once is more than enough to act against one’s logic in favour of one’s curiosity or vanity. But I must reiterate that it was quite delicious! 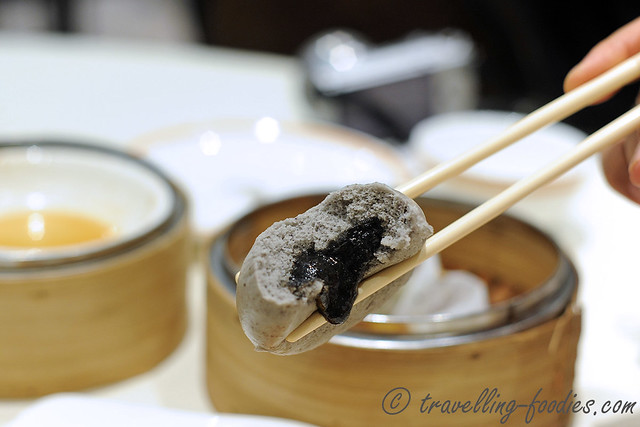 To end our dimsum meals, we would usually order a sweet item to polish it all off. For this round, we ordered black sesame custard lava buns. Custard lava buns are the craze now in many parts of the Chinese diaspora. Somehow the effect of a flowing and sometimes dripping hot custard filling appeals to many, including us. Tao Heung’s rendition was marvelous. The bun itself was soft and fluffy, despite having cooled off slightly, since we had it as our last course. The filling was also highly aromatic from the ground black sesame used. In summary, the buns ended our meal beautifully.