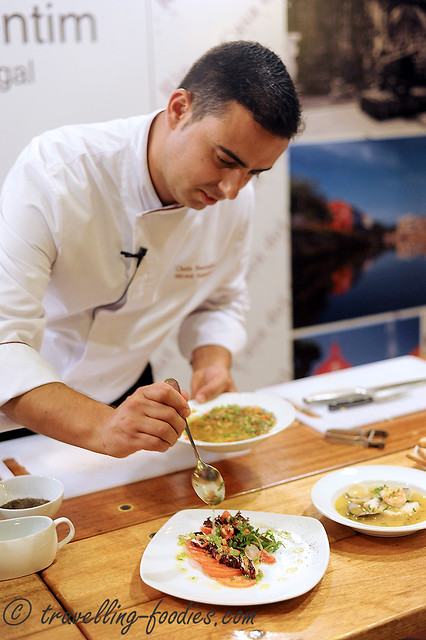 Melaka is a unique city and a melting pot of all sorts. Being strategically positioned along the Straits of Malacca which was named after the city, it attracted people from all over the world in search of opportunities for better living, trade and territorial occupancy. Like Singapore and Penang, Melaka was an important trading post and pit-stop for the Maritime Silk Road, promoting interaction and subsequently, the forging of blood ties between the folks of the Far East from China and Siam, with those from India and even as far as Europe. One of the earliest to have reached were the Portuguese, who colonised Melaka for more than a century from the 1500s. As a mark of commemoration to celebrate the long time establishment of the Portuguese heritage in this UNESCO historic city, Casa Del Rio Melaka is running a special feature called “A Taste of Portugal” at their River Cafe and River Grill restaurants, paying homage to the Portuguese influence on Melaka. For the first night upon our arrival, we were enthralled by a Portuguese Wine Pairing Degustation, specially created by Chef Micael Valentim who was flown in from Portugal precisely for the occasion. It was a wonderful night which celebrated authentic Portuguese cuisine with Portuguese wine. 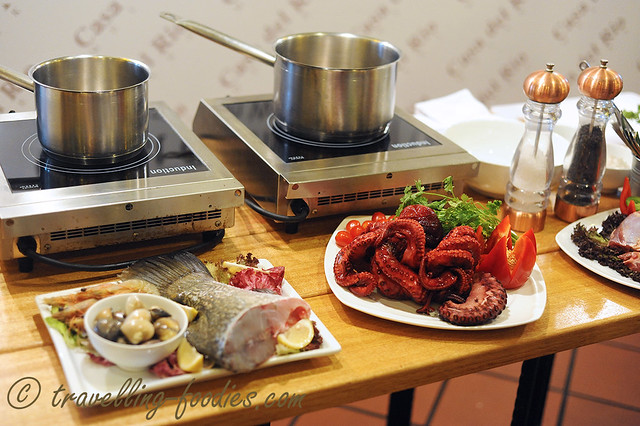 Portugal lies in the south-western tip of Europe with much of the country facing the Atlantic Ocean. Seafood comes in abundance and is widely represented in classical Portuguese cuisine. Yet interestingly from what I understood, save for a handful of unique condiments, most of the other ingredients were sourced locally to the specifications by Chef Micael Valentim who heralded fromthe five-star Martinhal Sagres Beach Family Resort Hotel in the Western Algarve, in full confidence that the fare a coastal city like Melaka has to offer would probably be as good as those available in Portugal. 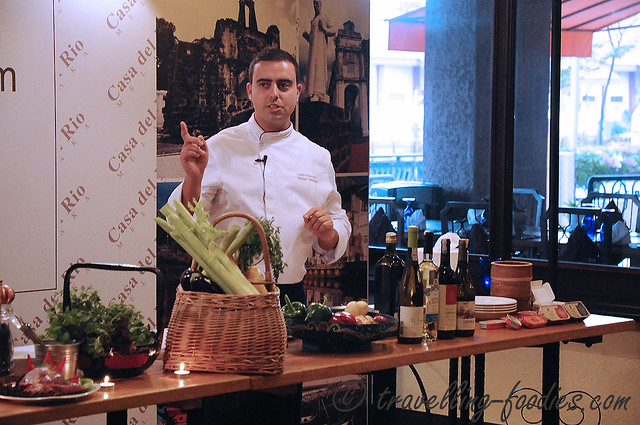 Like many distinguished chefs, Chef Micael learnt his ropes in classic Portuguese cooking from his mother and grandfather, from which quickly developed into what is now an exciting career and more importantly, a lifelong passion. He spoke fervently about Portuguese cuisine and explained its influences from the larger Mediterranean culinary roots, into which it became a signature and integral component of. 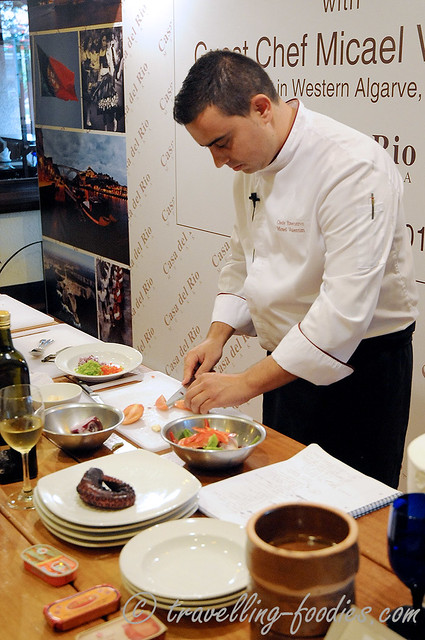 The Portuguese Wine Pairing Degustation that evening began with a cooking demonstration of the dishes which Chef Micael would be showcasing that night, “three simple Portuguese dishes which I hope all of you will like” he introduced in his heavily accented English, first with the mise place for “Salada de Polvo” ,  a traditional octopus salad commonly served in a Portuguese communal dinner. 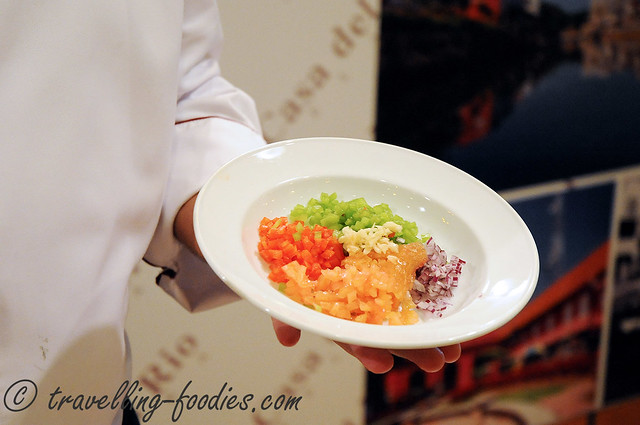 The first step in preparing the dish involves the brunoising of the staple vegetable ingredients like onions, celery, capsicum, tomatoes and some garlic into tiny chunks before being tossed with white wine vinegar, extra virgin olive oil, and the standard salt and pepper to form the drizzle. 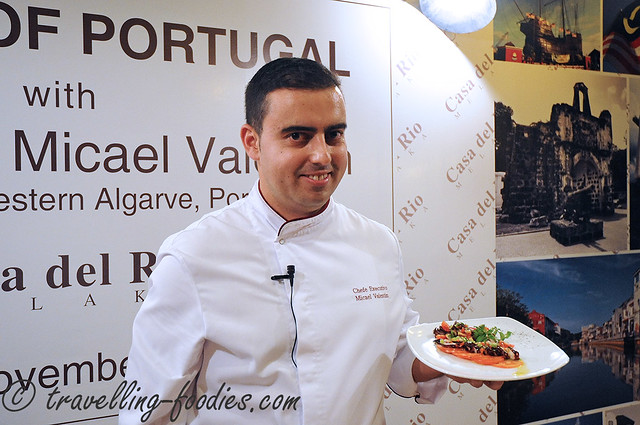 Within minutes, the dish was done and beautifully plated, with a small bunch of mesclun greens on the side. 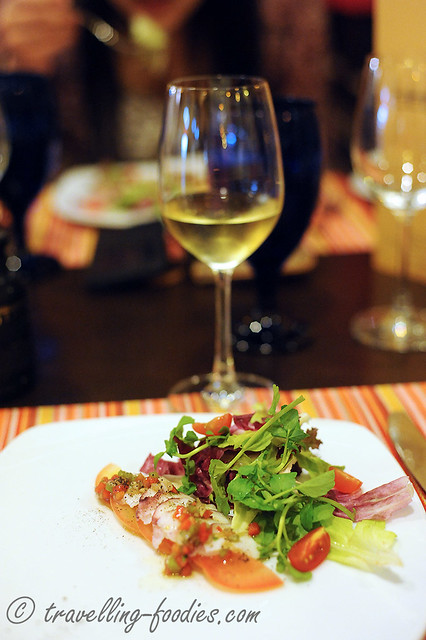 The octopus salad was paired with a rather young and fruity 2012 Antonio Lopes Vinho Verde Branco, which was very refreshing against the octopus salad. The whole octopus was first poached before being sliced thinly. The dressing had a citrusy zing to it from the white wine vinegar and EVOO combi which really helped to work up and whet our appetites for the dishes to come. 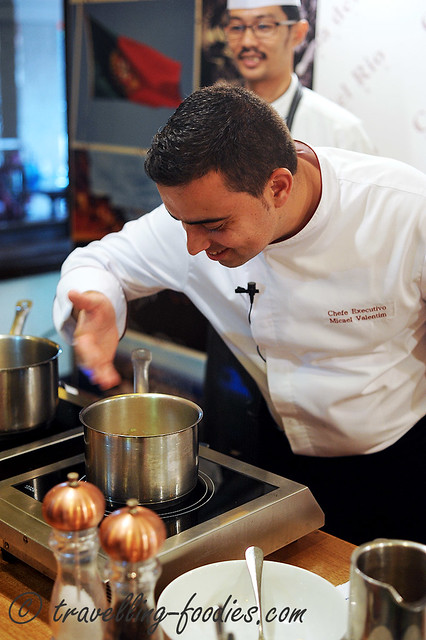 While we were enjoying the first course, Chef Micael checks on the stock base which comprised of basically fish bones and a finely chopped vegetable concoction known in Portuguese as “refogado“, not unlike the French “mirepoix“, for Caldeirada de Peixe,  a traditional Portuguese Fish Soup. 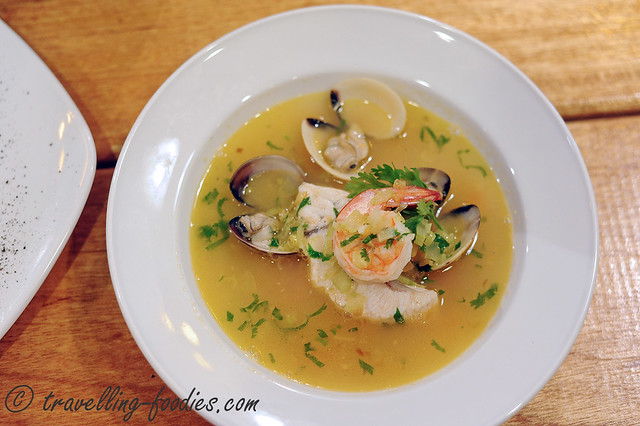 The fish soup is simple to make but no less delicious. The flavours were bursting with umami goodness and sweetness from the marriage of seafood and vegetables. The slab of barramundi was poached beautifully to perfection, very tender and succulent. The soup on the whole considerably lighter than the French Bouillabaisse but still packed with robust flavours which reminds one of the sea, flavours untainted from the simple but precise usage of condiments and a final sprinkling of chopped coriander for the additional lift.

The pairing was with another white, a 2011 Tiara Duoro from Niepoort which was considerably drier compared to the earlier Antonio Lopes. Several of us felt that it was rather “heavy handed” to be paired together with a seafood soup though it was probably done with good intentions for contrast. 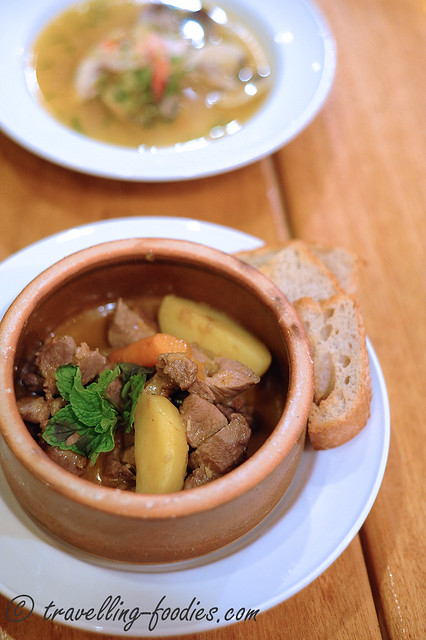 The last of the savory dishes was Chanfana de Borrega, a Portuguese Farmer’s Lamb Stew, originally peasant fare which has been slightly refined by Chef Micael in presentation, yet retaining most of the down-to-earth and rustic flavours. Concocted from the typical refogado like the earlier dishes, the stew uses lamb bone stock as the base, with tomato concasse and sweet paprika added as well for that extra boost of piquant flavours. The lamb is braised in stock until it is meltingly tender, complimented by the assortment of root vegetables, not forgetting the herbs like bay leaf, oregano and mint. Special care was taken to remove bits of fat to avoid any “gamey” taste which suet sometimes provide. The leg of lamb was chosen as it is much more flavoursome compared to other cuts making it ideal for prolonged stewing. Served together with crusty white bread, the dish was very wholesome and enjoyable, especially with its wine pairing of Esporao, Reserve Branco. Interestingly was this pairing as red meats are conventionally paired with red wines. But this pairing worked surprisingly well as the flavours of this meat stew was much lighter and more delicate than what one would have expected from a lamb stew, allowing the aromas and flavour of this selected 2011 white to carry through wonderfully. 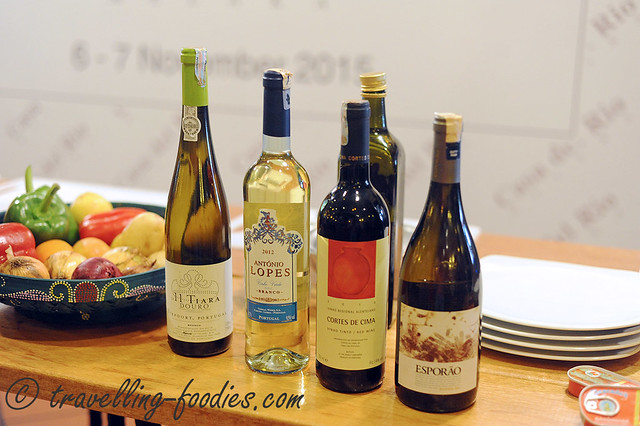 A selection of wines which was served either as a pairing or used in the cooking. 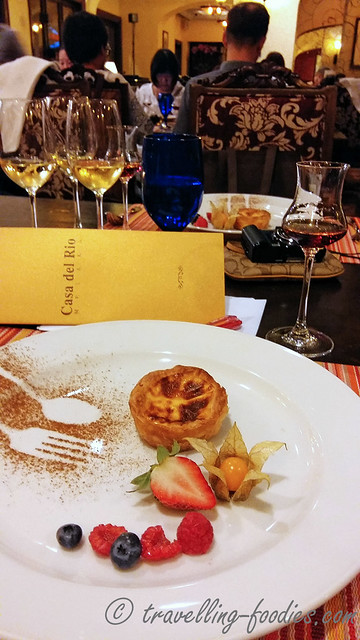 The dinner concluded with dessert served, the famous Portuguese Egg Custard Tart paired with Colheita Port from Niepoort. The port wine was sweet, smooth and full-bodied, together with the beautifully caramelised egg pudding brought the lovely evening of Portuguese Wine Pairing Degustation to a resounding grand finale. 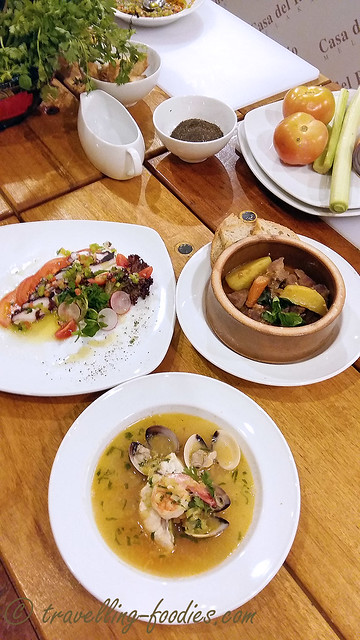 The selection of dishes is available as part of the Saturday Buffet at River Grill, Casa Del Rio Melaka where diners are able to sample and savour not only their impressive spread of international cuisine, but also these dishes as part of the “Taste of Portugal” feature which is running now at the restaurant.