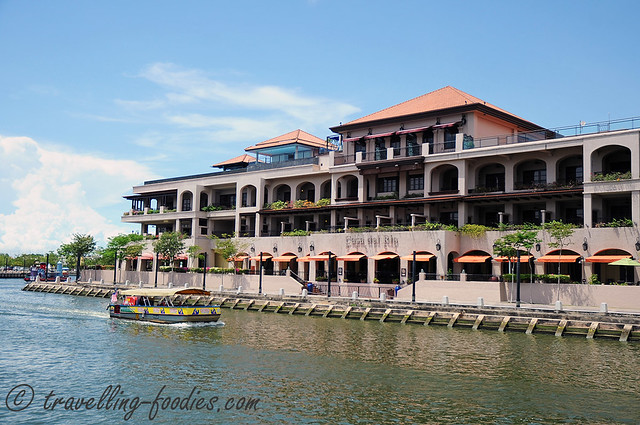 Melaka is a city which lies close to my heart. I love it for many reasons, the food, the people, and the surprises abound, be it a new Peranakan dish which I’d not eaten before, or an interesting little street dotted with small quaint shops which I’d never been to previously. Despite being to this city which lies just 4 hours north of Singapore on numerous occasions, I’d not grown tired of it and I don’t think I ever will. Just last week, I had a wonderful opportunity to visit this beautiful place once again, with an entirely new holidaying experience that awaits… 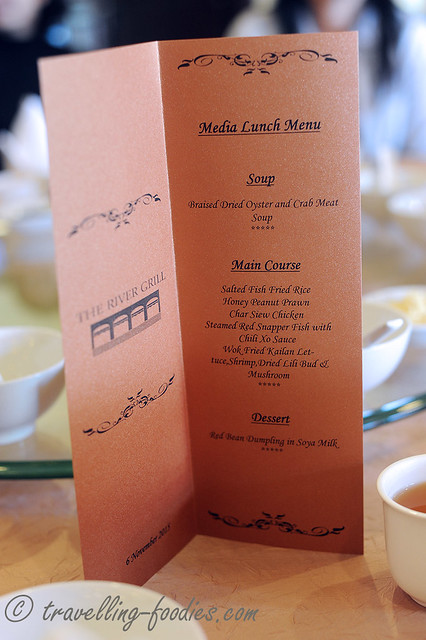 For this trip, I put up at the beautiful Casa Del Rio Melaka, a luxurious boutique hotel which sits idyllically along the banks of Melaka River. Under the kind arrangement of the hotel, we were treated to lunch upon our arrival at its River Cafe, curated by Chef Ghazali Hashim, the Executive Chef of Casa Del Rio Melaka.

This was a special arrangement  that was well-intented to “stray away” from the typical showcase of Peranakan cuisine which many would have experienced in Melaka. Chef Ghazali Hashim joined Casa Del Rio Melaka just half a year ago, after garnering more than 20 years of culinary experience, honing his skills while he was working as Chef de Cuisine at Kandooma Maldives and Executive Chef of Concorde Hotel Shah Alam under the HPL family, as well as other renowned international hotels in Penang and Langkawi. The menu for the occasion comprises of Chinese dishes, a showcase of Chef Ghazali’s understanding on the cuisine. 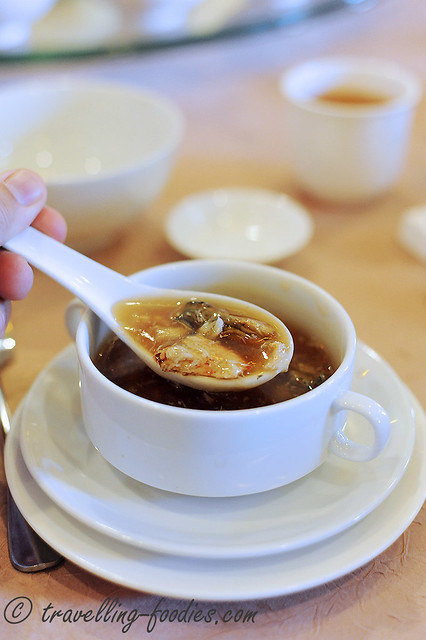 The first to be served was Braised Dried Oyster and Crab Meat Soup. One slurp and I was immediately overwhelmed by the sensation of umami, and the taste of the sea, mostly aptly so for a coastal city like Melaka. The dried oysters were slightly reconstituted and then braised from which rich flavours packed within each little piece were extracted to become the pivotal component of the soup base. Accompanying the dried oysters were morsels of crab meat as well as shrimp, each playing their part to boost and enrich the broth, concocted to the right consistency to make the “slurping” process most gratifying. 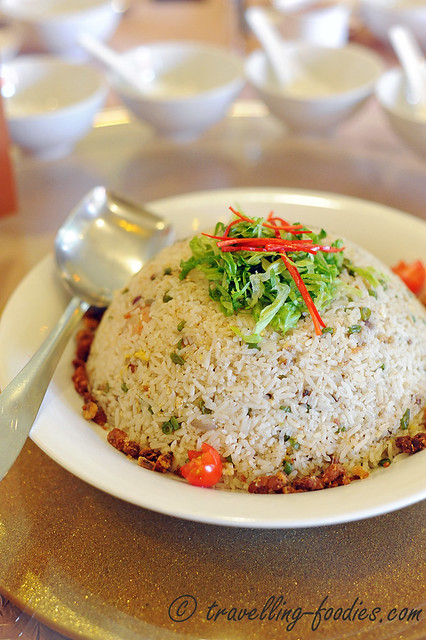 After our tastebuds were reinvigorated by the soup after the long coach ride up north, we were served some carbs, in the form of Salted Fish Fried Rice. Don’t let the name fool you, it is much more than it sounds. Upon being presented on the table, the diners were instantly rejuvenated by the lovely aromas of the salted fish, which had been fried until each little chunk of it is uber crisp, which contrasted well texturally against the rice, sauteed shallots and chopped long beans after the salted fish had been tossed and thoroughly mixed with the other ingredients. The “wok hei” from the dish was quite apparent, exemplary of good Chinese stir-fry dishes, as well as a necessary skill for anyone who broaches traditional Chinese cooking, and Chef Ghazali clearly as it already under his belt. 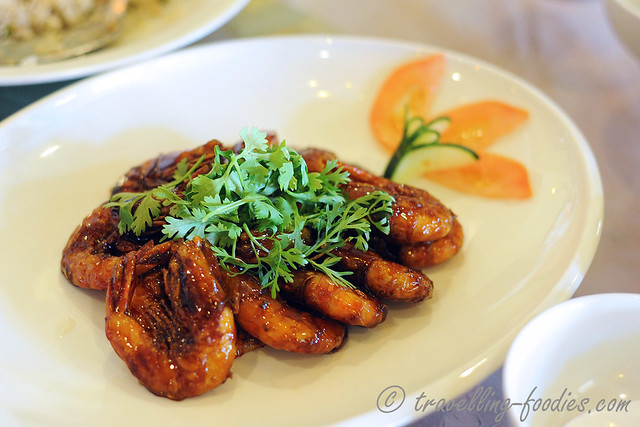 Honey Peanut Prawns was served up next and we were “gently reminded” to save some of the fried rice in our bowls to go with it. After taking the bite I understood perfectly why. The savory flavours from the fried rice bore great contrast against the sweet and sticky coating on the prawns, accentuating the palate sensations all at once. The prawns were deep fried until all of their shells and heads were crispy to the point of being able to be eaten as a whole. The fried prawns were then quickly robed in the sweet and sticky sauce which made them so yummy, and we had no qualms to go for seconds and thirds! 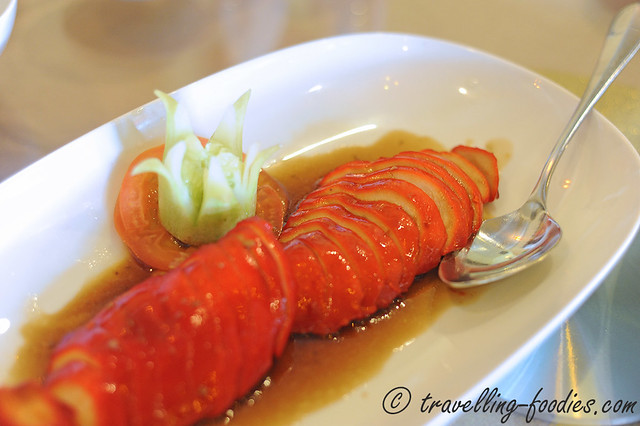 Chicken Char Siew, drizzled with a sweet sauce. Maybe I’m more accustomed to char siew made the traditional way through grilling with all that gooey “charred-ness” from the glimmering glaze. The meat could be marinated a tad longer for stronger flavours, and I think a softer and more succulent cut like drumstick or thigh would probably do better than chicken breast. 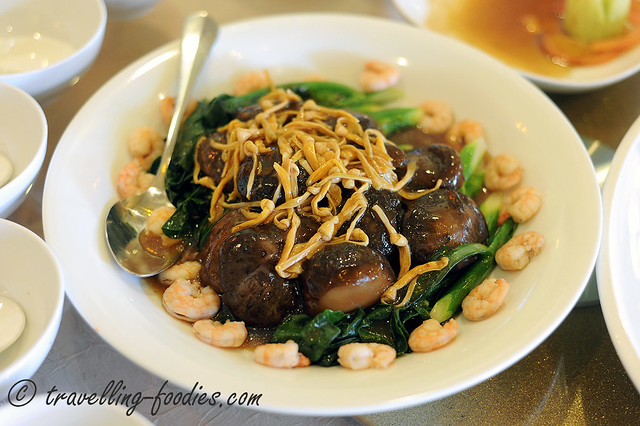 Wok-fried Kailan with Mushroom and Lily Bud. This dish was also quite well executed with the kailan greens still crunchy from the brief blanching. The mushrooms were delightfully flavourful and succulent, presumably from a good amount of time spent on braising before being assembled together with the other ingredients. I particularly like the addition of lily bud aka “kim chiam” for their slight chewy textures which complimented the other components really well. 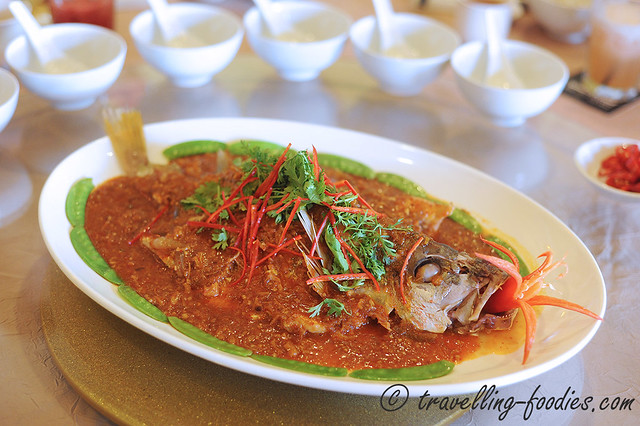 Steamed Red Snapper with XO Chili Sauce. Prima facie, the sauce looked and smelled in a way which reminded us of our own Chili Crab in Singapore but looks, and smells in this case, can be deceiving. The sauce was packed with piquant flavours, particularly from the liberal use of dried shrimp blended with the chili base, presenting nuances different yet somewhat similar to the familiar sambal udang kering aka hae bee hiam, for the uninitiated. The red snapper was very fresh and more importantly, steamed to perfection with the meat being barely just cooked, still very tender and sweet, determined not to be overshadowed by the strong flavours from the sauce it was robed with. On the whole, the fish and the sauce complimented each other beautifully, making the dish very moreish, definitely calling for a second helping of rice just to go with the delicious sauce when the fish is done. 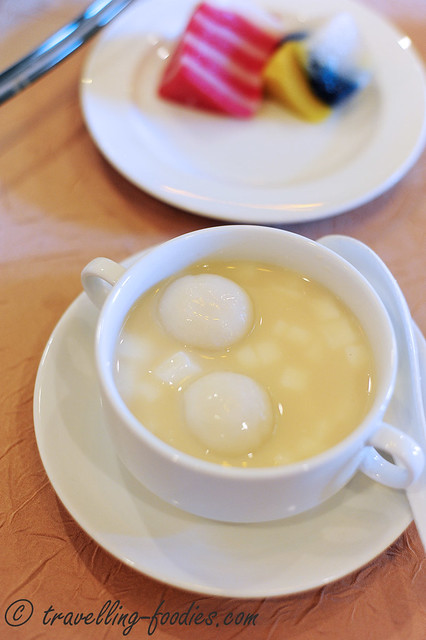 Dessert on the menu was Red Bean Glutinous Rice Dumplings cooked with Soya Bean Milk. There were also small chunks of soya bean milk set in agar to break the monotony of the textures, though I would have preferred the glutinous rice skin of the dumplings to be slightly thinner with more red bean filling. On the whole, the dessert was set to be a healthier version of what a dessert is accustomed to be, slightly less sweet than expected. 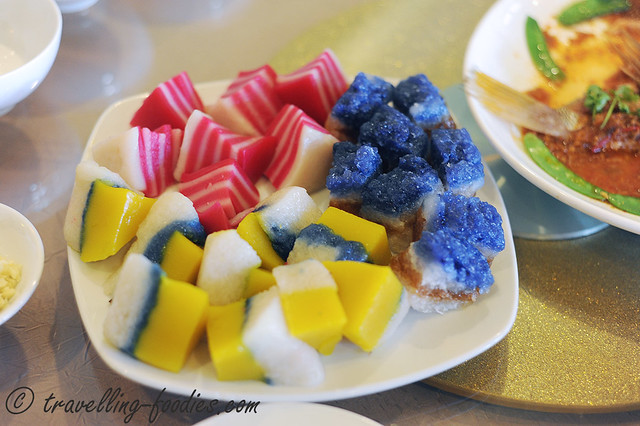 We were also treated to a platter of assorted Nyonya kuehs, namely Kueh Lapis or Kueh Genggang as they are known in Melaka, in alternating layers of white and hot pink, Seri Muka, otherwise known as Gading Galoh, golden custard set above a layer of glutinous rice steamed with coconut milk, and Abok Sagu, layers of sago pearls mixed with grated coconut, gloriously coloured and flavoured with gula melaka palm sugar, not forgetting the blue dye extracted from bunga telang which we see being used in many Peranakan kuehs. I am partial to the abok sagu as the chewy textures were of good consistency and I love anything cooked with gula melaka! 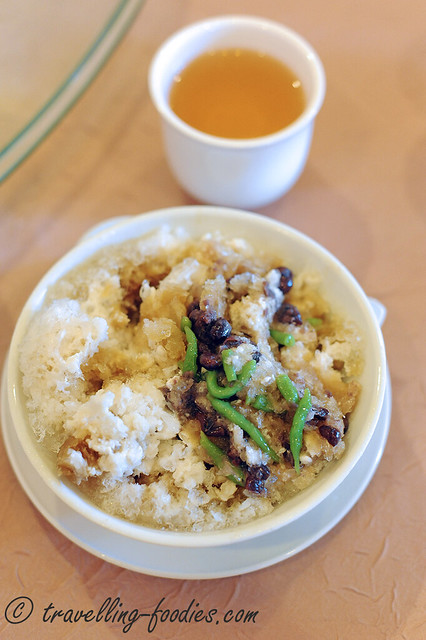 Finally, we were all treated to Cendol, a local iced dessert iconic of Melaka and some other areas of the old Straits Settlement. Cold and refreshing, the cendol was perfect as a resounding finale to the wonderful meal. 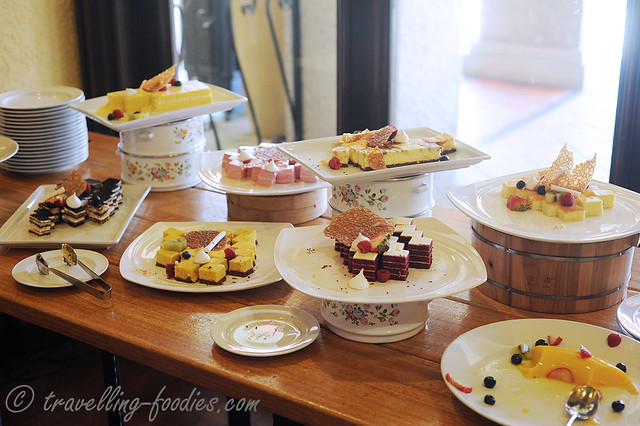 The spread of dishes from the Chinese cuisine we enjoyed is not what is usually served at River Cafe Casa Del Rio Melaka for lunch. The restaurant offers their signature “tengkat lunch sets” instead, with the main dishes varying everyday throughout the week, elegantly presented in beautiful tiffin carriers, invoking a strong sense of reminiscence and nostalgia, to how food was commonly served in the past.  I have heard much about it and most certainly hope to be able sample the tengkat lunch sets in future!

That said, I understand that special arrangements can be initiated, to better cater to the needs of specific or corporate groups who may wish to sample dishes from the wide repertoire which Chef Ghazali and the team in his kitchen has to offer. I was told that his western fine dining dishes are impeccable and particularly appreciated by regular diners at Casa Del Rio. Now that is most certainly something worth looking forward to!