I made and blogged about my “Pulled Beef Rendang Pasta” two years back, a good way to enjoy a pot of rendang besides the traditional way of eating with rice or even ketupat. But when one craves for a plate of rendang pasta, one can’t wait for a good day or two for the rendang to mature sufficiently yeah? So here comes the solution… Spaghetti Rendang Bolognese! 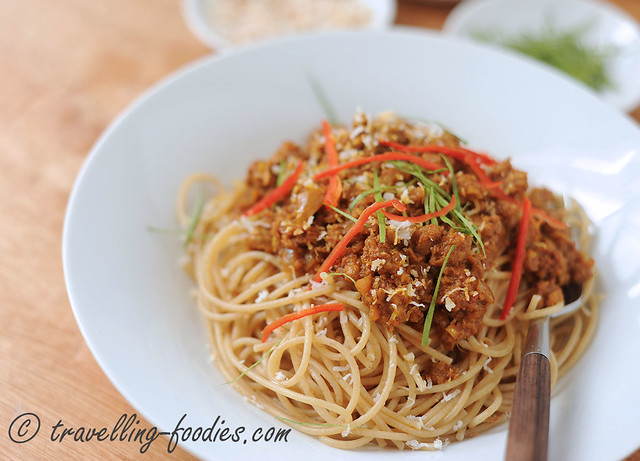 Cooking rendang with ground meat (daging kisar) is really a fast and easy way to enjoy the rich flavours of rendang within a much shorter period of time than what one would need to have cooked a pot of rendang the conventional way. It takes only a fraction of an hour, compared to the hours of prolonged stewing, not to mention the overnight resting. Undoubtedly, the flavours from rendang cooked the traditional way is simply unsurpassable, but I guess using minced beef or chicken in place of the large chunks of meat not only saves time and fuel, but most importantly, saves one from that craving a yearning… 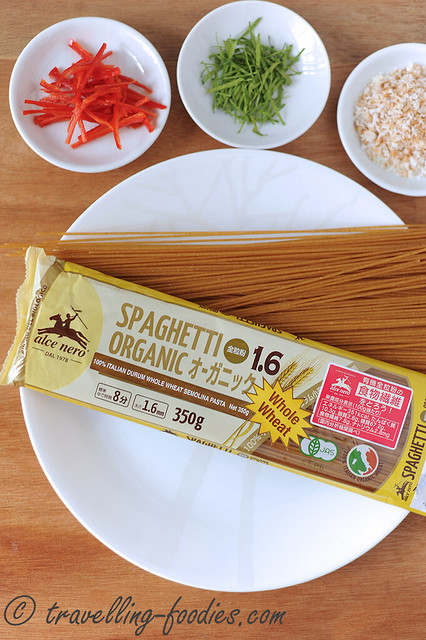 I’d used a packet of organic spaghetti which I’d gotten a few months back as a sample try out. It is from Alce Nero, a new brand of pasta that is hitting the market. Made in Italy, it seems to be targeted for the Japanese market as well. The aroma from the wheat was very apparent as I cut open the packet. Far more so than the other brands of pasta which I’d tried before. Looks promising indeed. 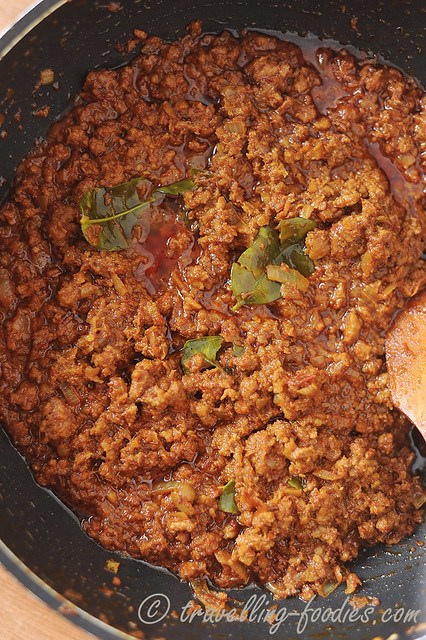 Like I’d mentioned, cooking the minced meat rendang takes only a fraction of the time compared to stewing huge chunks of meat the conventional way. About 30 to 40 min or so, the rendang using ground beef is basically done. I would imagine that using ground chicken would be much much faster than this! That said, the other ingredients are not compromised, using a generous portion of my generic rempah which I always have ready frozen, kerisik, gula melaka and not forgetting kaffir lime leaves, our way of cooking rendang compared to the conventional tumeric leaves. 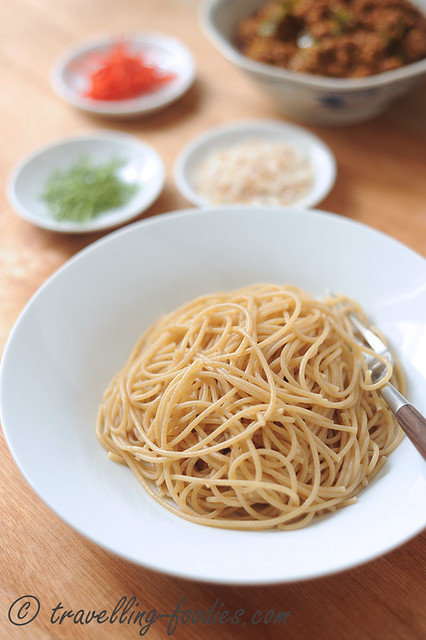 Those the pasta from Alcer Nero was several shades darker in hues compared to the other brands when it was just of the packet, the colour lightens considerably when it is cooked until al dente. The text on the packaging isn’t that clear on the cooking time needed but I basically followed the conventional way of cooking dried spaghetti, i.e. 12-13 min over in a pot of boiling water and a small pinch of salt. It worked well.

After the spaghetti is cooked, all that is left is the assembly which is as simple as scooping a generous amount of rendang daging kisar over the freshly cooked spaghetti and garnishing with sliced chilies, julienned kaffir lime leaves and kerisik for that extra oomph of flavours. Selamat Makan! 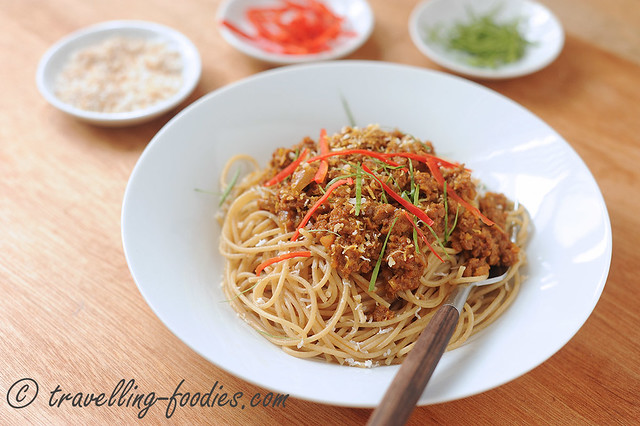 Method
To cook the rendang daging kisar, first add cooking oil into a heated wok.
Add diced onions with a small pinch of salt and saute until translucent.
Add generic rempah and stir fry until fragrant.
Add ground meat into the wok and use a spatula to break it up into smaller bits.
Add coconut milk, kaffir lime leaves, gula melaka, salt and stir thoroughly to mix well.
Lower flame to medium low and simmer for 30-40 min until the meat is thoroughly cooked and tender.

To cook the pasta, add pasta to boiling water with a small pinch of salt and cook as per instructions on the packaging.
Drain the pasta when it is al dente.
Portion the pasta into individual plates and scoop a generous portion of rendang daging kisar over the noodles.
Garnish with sliced red chilies, kaffir lime leaves and kerisik.
Serve immediately.