Protocol and formalities once perpetuated every aspect of the ways of life of a Peranakan, even in its cuisine. Some dishes were cooked specifically for certain occasions and having them appear on the dining table otherwise was a big no no. For example, “pongteh” was a dish prepared for semayang abu (ancestral prayers) and not to be confused with “chin“, a very similar dish which was associated with weddings instead. The same was with the “kueh culture” for the Peranakans, colour coded to highest levels of specifications, red and yellow for festivities while green and blue were for funerals. But over the years as the generations evolved, many converted to Catholicism or “masok Christian” and abandoned these practices, while for others the “reins” faded and eventually disappeared as they became more influenced by Western culture, married out of the baba-nyonya community or simply migrated to a part of the world where Asian culture isn’t a mainstream, let alone the Peranakan way of life. As such many aspects of the “adat” and its “rules” became relaxed, with only a handful of puristic Peranakans still stauchly following the very traditional customs to the strictest order and in full regalia. Thus, it is not uncommon, to find dishes which were previously cooked for separate occasions appearing on the same dining table nowadays. The identity of certain dishes also evolved over time, and one of them is Nyonya Mah Mee, which is sometimes just called Mee Nyonya. 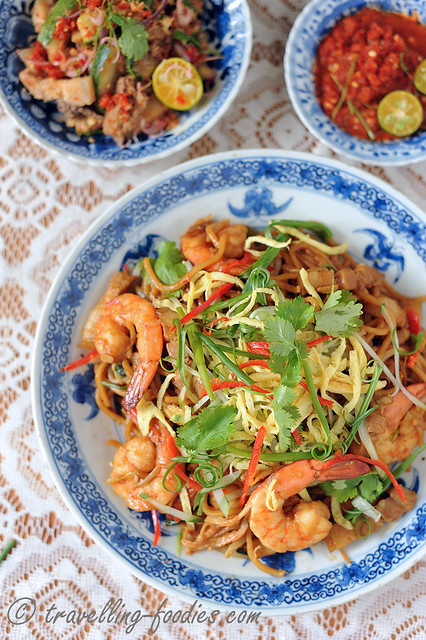 Nyonya Mah Mee, a signature noodle dish in Peranakan cuisine has its roots in traditional Chinese cooking, being very similar to the style of stir-fried prawn noodles cooked by the Hokkien Chinese. This hardly comes as a surprise since the majority of Peranakan Chinese has their ancestral roots from Fujian, China. Like “pongteh” and “chap chye“, Nyonya Mah Mee was a dish traditionally cooked for semayang abu, hence giving rise to its other name “Mee Semayang“. It was also served to family and friends when they return home after sending off the deceased to the burial grounds on “ari choot sua” (funeral day) which gives rise to its other name “mee tong cheh”, with “tong cheh” actually being an onomatopoeia for the sounds produced by the percussion instruments used during the numerous rituals at the funeral wake and procession. In modern context however, it has slowly evolved to become a “festivity dish”, appearing prominently on birthday dining tables, taking over the once customary “Mee Sua Tow” or “Mee Suah Thau” where fine wheat vermicelli known as “mee sua(h)“, literally to mean “string noodles” was symbolically cooked as longevity noodles. This was largely frowned upon by the older Peranakans when they see a dish they associated with funerals when they were young appearing on their birthdays! “Patang!”, some of them would exclaim I’m sure but over time, this culinary displacement seems to be here to stay and have become a “staple”, with the older folks learning to close one eye and mutter their “koosmangats” quietly so as not to dampen the moods of the ignorant but well-intended. Needless to say, it has also made its way into restaurant menus, together with other dishes which were previously cooked for the dead, but now happily enjoyed by the living. 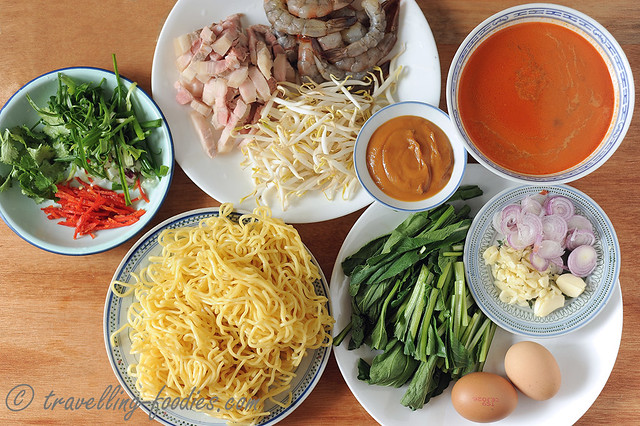 The ingredients for Nyonya Mah Mee are very similar to those one would find in a typical Asian noodle stir fry except for one ingredient, taucheo. It is the use of fermented soya bean paste which lends the dish its assertive taste and sets the flavours of this dish apart from its Chinese counterparts. 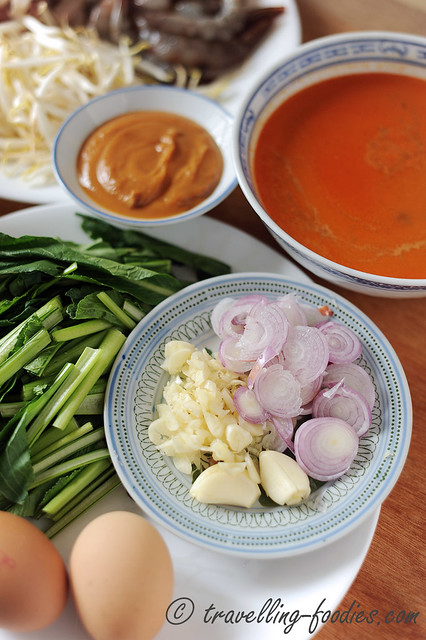 Shallots and garlic are used generously in this dish to heighten the aromatics. Part of the shallots are first fried until crispy. Some of the fried shallot crisps are kept and used as a garnish while a small portion is re-added back into the noodles to deepen the flavours. 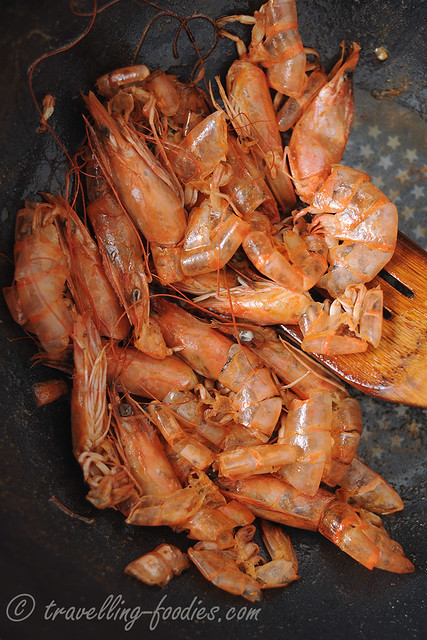 The success of this dish comes from the broth. Apart from the pork belly used, the prawn exoskeletons are also included in the broth making process, first pan fried with some oil to extract all that umami goodness before adding water to pull out all the flavours. Like my laksa lemak, one could get the most out of it by blitzing the pan fried prawn shells and heads into a bisque. Otherwise, using the spatula to slightly press down on the heads to squeeze out all that trapped juices would work too. 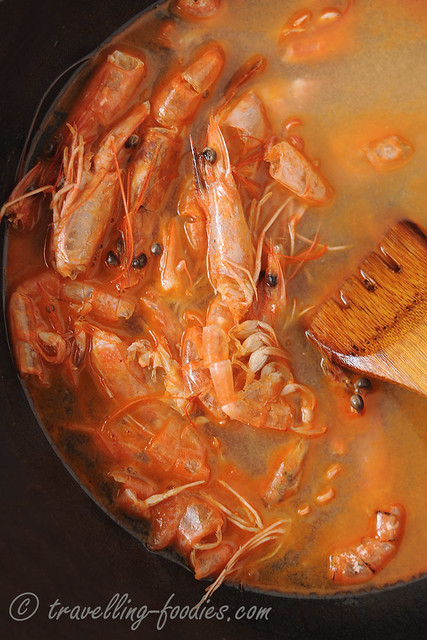 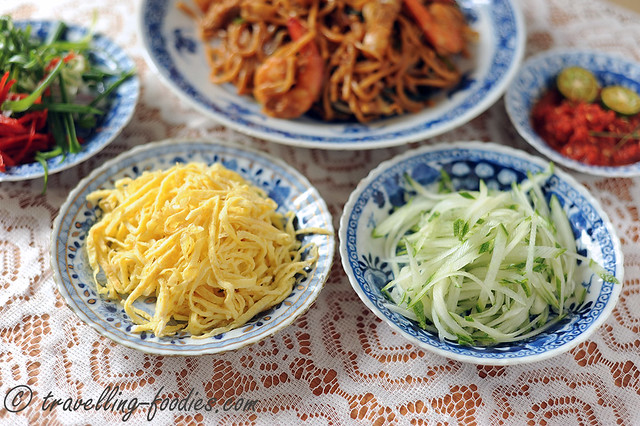 The topping condiments for Nyonya Mah Mee not only serves as an embellishment but more importantly add texture to the dish. Apart from sliced chilies, spring onions and coriander leaves sprinkled on the noodles, sliced egg omelette and julienned cucumber are also added for contrast. Especially important is the cucumber which provides not only crunch but also helps to rejuvenate the palate after tasting the richly flavoured noodles. 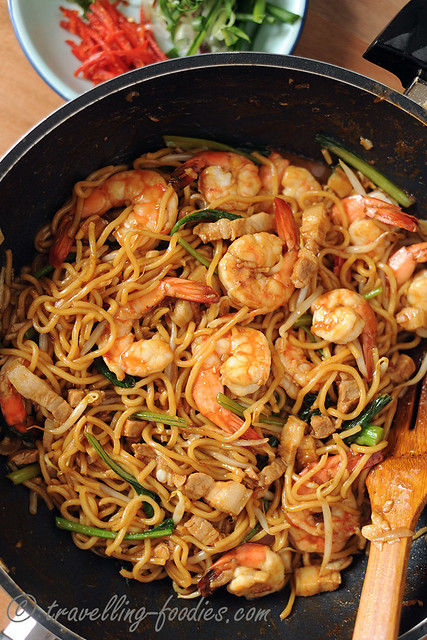 The order of adding the ingredients is important, to get the most out of each component, making sure that all are well-flavoured but nothing is overcooked. The finished Nyonya Mah Mee should be deliciously moist with the noodles fluffed up and succulent after soaking in the sauce and all its lovely flavours but still maintaining its springy textures. There should be a little sauce collecting at the bottom of the wok which can be worked into the noodles with some quick frying before serving, but the noodles should not be drenched in sauce and soggy wet. Bear these in mind and Nyonya Mah Mee is definitely gonna be a crowd pleaser. 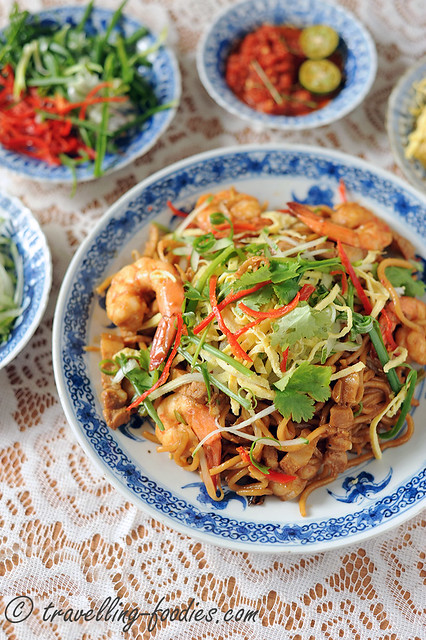 Method
First prepare the pork and prawn stock.
Add 2 tbsp cooking oil into a heated wok.
Add prawn shells and heads and pan fry until the exoskeleton turns orangey red and aromatic. Use the spatula to press against the heads to release the trapped juices.
Add water and bring to a boil. Add the piece of pork belly. Turn down the flame to medium low and simmer for 30 min until the pork belly is cooked through.
Remove the pork belly and set aside to cool. Drain the stock into a large bowl and discard the exoskeletons. The stock should be left with approximately 1 and 1/2 cups now. Cut the pork belly into 5 mm long strips.
To the same wok, add 1 tbsp of oil. make 2 omelettes, one from each egg. Dish up and set aside to cool. Cut into narrow strips
Add 2 tbsp of oil into the wok and add half of the sliced shallots at medium heat. Saute until they turn light brown and crisp. Drain and set aside to cool.
Turn up the flame to medium high, and in the remaining shallot oil, add remaining shallots, followed by minced garlic and pan fry until fragrant. Add pork belly strips and saute lightly to brown.
Add taucheo paste and stir fry until it exudes the characteristic aroma of the fermented soya beans
Add yellow noodles and stir fry slightly. Season with sugar, dark soya sauce and pepper, while continuing to stir fry.
When all the noodle strands are well coated and seasoned, pour in 1 cup of stock and mix the ingredients well. Add the stalks of the chye sim or kangkong at this point.
Cover with lid and allow to braise for about 2 min.
Open lid and stir fry a bit. Add a bit more stock if the noodles are too dry at this point.
Add prawns and the leafy portion of the vegetables, cover lid and let the noodles braise for another 1 min.
Open lid and add beansprouts with half of the fried shallot crisp, toss the noodles slightly. Add more stock at this juncture if the noodles are too dry. Nyonya Mah Mee should be moist with the noodles cladded generously with sauce. But it should not be wet to the point of having a lot of gravy.
Turn off flame and cover, allowing the noodles to sit for 1 min or so.
To serve, garnish with spring onions, sliced red chilies, omelette strips, cucumber strips and remaining fried shallot crisps.
Serve with sambal belacan and sambal timun.