A lot of my time during my university days at NUS was spent on campus, performing experiments in the labs, conducting research in the libraries and doing tutorials with friends at the numerous benches along the corridors. A lot of my meals were also settled in the faculty canteens, most notably the one near LT26 in the Science Fac or the oddly constructed Arts canteen in FASS, as I transit on a daily basis between these two faculties for lectures and tutorials. During meal times, the canteens were perpetually packed to the brim, with the lunch crowd often spilling over to the nearby study benches in takeaway styrofoam boxes. The queues at popular stalls were long beyond belief and by the time it was my turn to place an order, I would have to be rushing for the next tutorial already. As such, my study pals and I often picked the stall with the shortest queue to eat from and at the Science canteen, it had to be the one which sold “Western Food”. The food ain’t that bad really, just not particularly popular as most of my classmates, particularly the “China scholars” would prefer their ritualistic rice with stir-fry dishes from the mixed vegetable rice stall instead, often seen eating with an “interesting” combination of stainless steel spoon and a pair of chopsticks. The selection available at the “Western Food” stall was probably quite alien to them. We avoided the usual pork chops and chicken cutlet which were cooked in situ only upon ordering which meant longer waiting times, and opted from their version of “mixed vegetable rice” which we could “pick for a quick platter” instead. That said, even the dishes available were “unfamiliar”, to say the least. From the selection, one particular dish was “peculiarly” memorable. The elderly lady stall owner told us it is called “Chicken à la King“, which I had not a faintest clue what it was initially. But I remembered it being quite tasty, especially drizzled over rice, or macaroni . It reminded me much of those canned soups, creamy and chunky, which I bought and ate with instant noodles during my stay at KEVII Hall, wholesome and fulfilling suppers for the growing young man I was during those nights mugging in my chilly hostel room perched on the ridge. I replicated the dish several times during my hostel stay, first using Campbells, then from scratch after searching for a recipe online. Those were the “dialup” days when internet was still slow and laggy. Thankfully, finding a recipe for this American comfort food was quite easy. Over the years, I’d revisited the old recipe several times, though lesser often nowadays. But I do cook it now and then, when I just need an easy one-dish meal, or simply to revisit those memories of my school days. 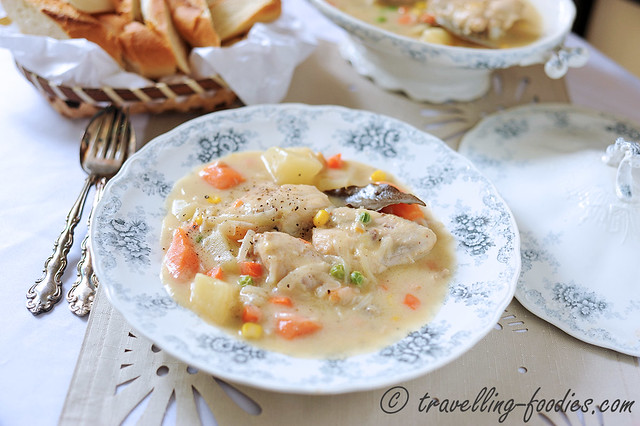 Chicken a la King, is essentially a “roux-based” dish whose roots stretch deep into the heart of French cuisine, being the base of three of the five mother sauces in classic French dishes. That said, this dish was supposedly created across the Atlantic in Philadelphia by a chef named William King from the Bellevue Hotel. 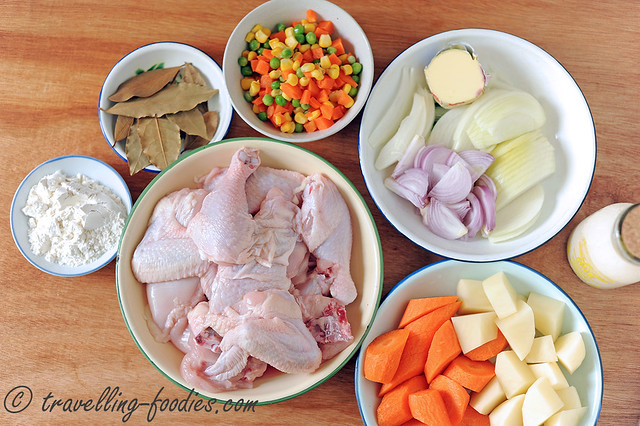 Despite the classy appeal it offers, this chicken stew is actually quite easy to cook, given a few necessary ingredients. Chicken is of course the star in this dish though I don’t see why it can’t be cooked with veal or even pork given longer stewing time. Root vegetables are usually cooked along side to lend sweetness to the creamy broth. Mushrooms are a fantastic choice as well, swiss browns or even button whites being most ideal. Stay away from robust tasting ones like cepes aka porcini or chanterelles which would rob the simple taste this dish offers.

Bay leaves are an absolute must, alongside black peppercorn which is cracked during the cooking to infuse a hint of spicy edge, and also at the end just before serving to accentuate the flavours. I have also tried adding a pinch of freshly ground nutmeg and even Japanese shichimi spice powder works beautifully, providing an oriental twist to it. 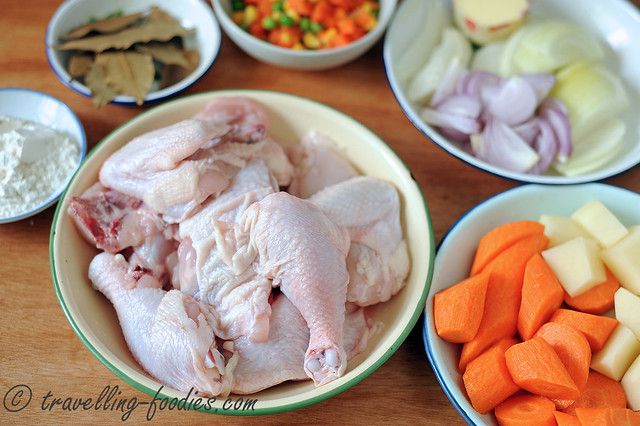 For the chicken, I prefer thigh and drumsticks on the bone, as I always think stewing with bones adds more dimension to the taste though classically, Chicken a la King is cooked with boneless strips of chicken meat. Then again, I’d bastardised this dish repeatedly in all thinkable ways over the times with countless improvisations so I don’t really mind yet another modification. This is a really children-friendly dish so if you have kids in mind when you are serving this dish, it might be easier to ask the butcher to debone the chicken parts for you. 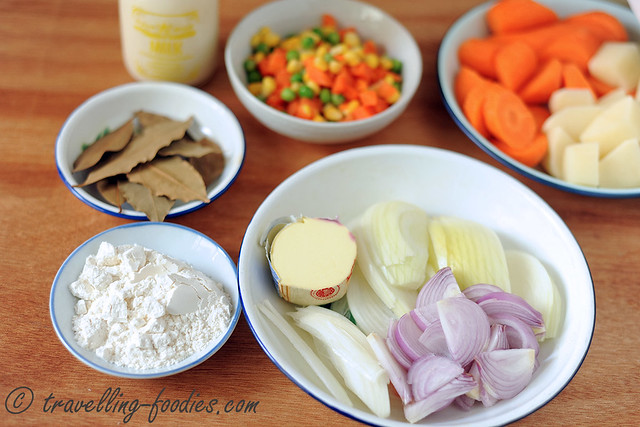 The primary ingredients of the roux are of course butter and flour. Salted or unsalted, it doesn’t really matter since salt has to be added to sweat the onions anyway. A little olive oil is also added to prevent the butter from burning. The choice of onions doesn’t really matter in this dish and for today’s rendition, I happen to use a mixture of purples and yellows. Collectively, they add an earthy sweetness to the base which is just beautiful. Experimentation wise, I’d used beurre noisette for the roux before, slightly more tedious but adds a lovely nutty aroma to the finished product. If one has the time, go for it, otherwise, a normal white roux would do just fine.

Root vegetables wise, I’ve kept it to carrots and potatoes. For the latter, choose an easy cooking and starchy variety like russets. The objective is for the potatoes to cook nicely and soften when the chicken are ready. I’d done celery before, doesn’t work quite well for me, just as the standard bell peppers which go into a classic Chicken a la King. I’d also added a small amount of mixed frozen vegetables which includes diced carrots, corn kernels and of course petit pois,  a “tradition” I picked up from the Science canteen foodstall though not necessarily from the original recipe. 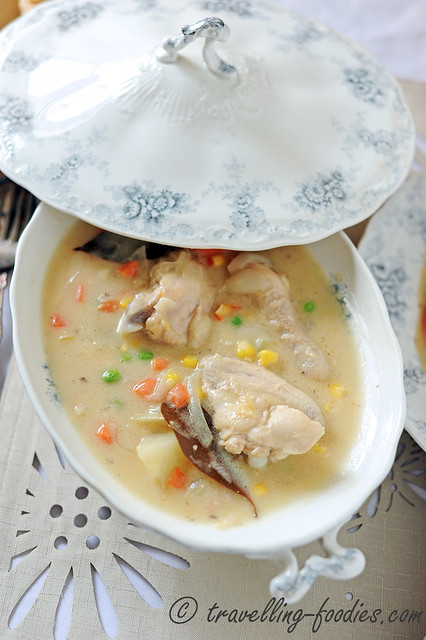 Despite sounding rather easy to cook, a little effort is needed to get the roux done correctly. If all goes well, you would have a lovely classy dish to impress your family and wow friends. Bon appetit! 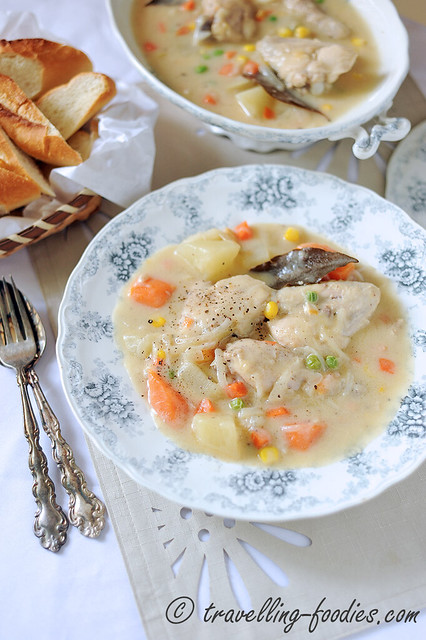 Method
In a saucepan, add olive oil and pan fry the chicken parts skin side down first until the skin slightly browns.
Remove the chicken chunks from the saucepan and set aside in a plate.
To the remaining olive oil and rendered chicken fat, add butter and heat until it begins to turn slightly darker.
Add sliced onions, bay leaves and salt. Saute to sweat the onions until they turn soft and translucent. The aroma from the bay leaves should be very prominent as well. If using, the quartered mushrooms should be added for a quick saute after the onions have soften.
Push the sauteed onions and bay leaves to one side of the pan, and add flour to the remaining oils.
Using a spatula or whisk, mix the flour and oils well until a grainy paste is obtained. The flour should have thoroughly absorbed the oils to form a roux.
Carefully pour milk into the mixture and bring to a boil to form a bechamel sauce. Etch the base of the pan to deglaze any bits stuck at the bottom.
Add chunked carrots, potato, bouillon cube and finally the browned chicken parts. Add half of the freshly ground black pepper at this instant.
Mix well and cover the saucepan, bring the flame down to medium low and simmer for about 20-30 min or until the chicken is tender.
Taste the stew and adjust flavours with salt if necessary. Add the pinch of nutmeg if using. Be careful with the nutmeg, as a little goes a long way.
Add the bowl of mixed vegetables and cover for another 5 mins.
To serve, ladle a generous amount of ingredients followed by broth over a plate of steamed rice or cooked pasta. Sprinkle each serving with more freshly cracked black peppercorns. Otherwise, serving the Chicken a la King stew with freshly baked rustic bread is also an excellent choice! 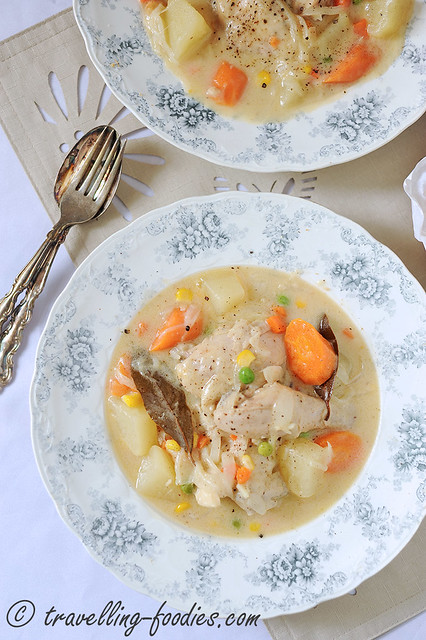