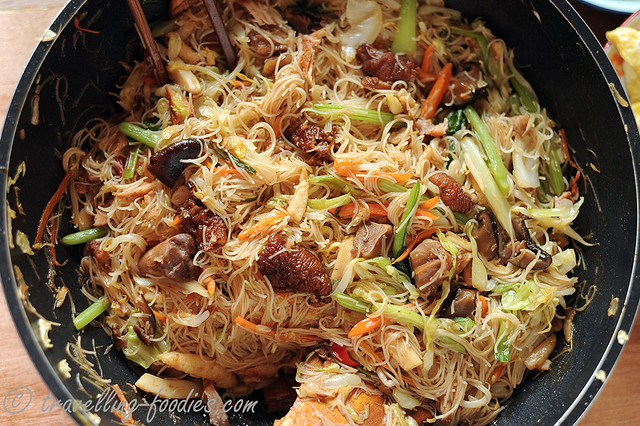 I can’t remember when I first had a taste of this dish. I must had been really young then. For me, this is really the taste of home, something which one would not be able to find outside, be it at the hawker centres or restaurants. It is a dish which I learnt from watching my mom cook for us since we were very little. From the washing of the vegetables, to the cutting of the fish cakes, it was also probably one of the first dishes which I’d learnt to cook. 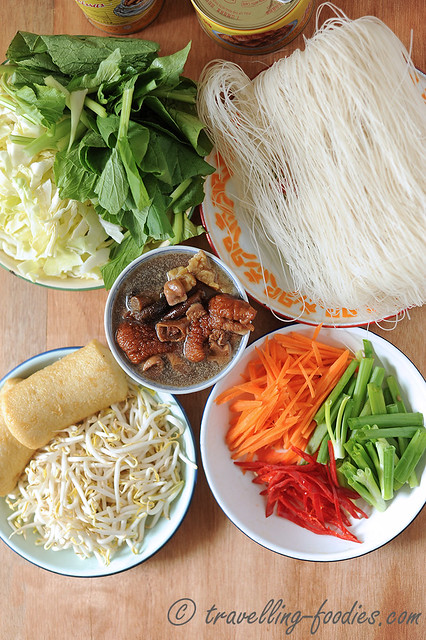 The ingredients are very versatile. Apart from the canned pig trotters and bee hoon, an assortment of condiments are also added but there is no fixed list. Sometimes there would be cabbage, otherwise it would be chye sim. Sometimes there would be bean sprouts and carrots, otherwise there would be none. It really depends on what “leftover vegetables” we have in our fridge, uncooked from our previous meals. Flavours varied slightly, depending on the ingredients added to accompany the bee hoon but the taste remains the same, so familiar and nostalgic. 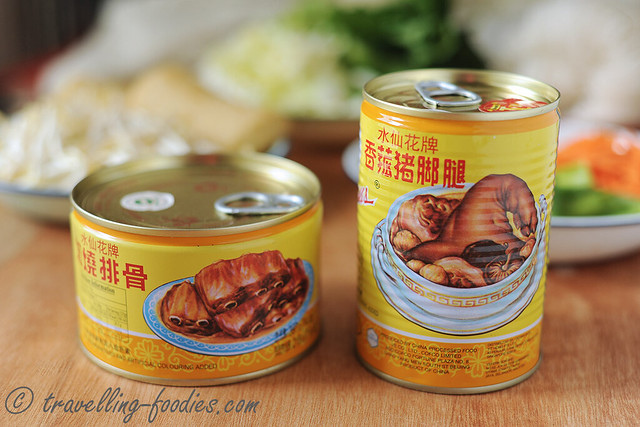 Taking centrestage in this dish is of course the canned braised pig trotters. In the past, entire fresh pig trotters were often given from the groom’s family to the bride’s as gifts during a traditional Chinese or Peranakan wedding. But Mom told me that over time, gifting whole pig trotters were seemingly not a fashionable thing to do anymore, and replaced with these canned ones instead. The ones we had at home were usually given by relatives or close friends, like when a particular auntie’s daughter had gotten married. Otherwise, they came from those pails of groceries that my dad would bring home during the Hungry Ghost Festival celebrations and offerings held at his workplace.

There are two types of canned braised pork available on the supermarket shelves nowadays. The one on the right of the photo is what is commonly used at home in the past for this family dish. Over the years, Mom also tried using the one on the left, braised pork ribs which were much less fatty and sinful, but of course, less yummy as well. So it is really your call, the slightly compromised pork rib version on the left or to go down the road of yummilicious decadence on the right. 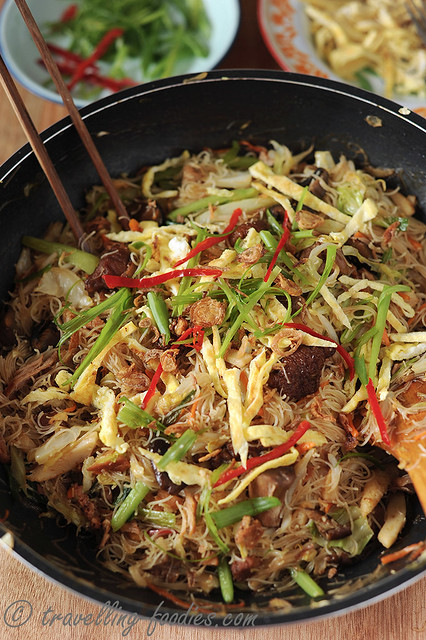 No Braised Pig Trotter Bee Hoon is complete without the toppings. At home, the usual suspects would be spring onions, chilies and fried shallots, though sometimes when Mom is rushing for time there would be none. Often there would be fried sweet beancurd sticks known as “tau kee” as well. But the most important condiment for me is the thinly pan fried omelette cut into long strips. When my mom is asked to prepare fried bee hoon for birthday celebrations of relatives and close friends, these “telor dadar” are sometimes coloured pink, not to mention the “bunga cili” added on the side. 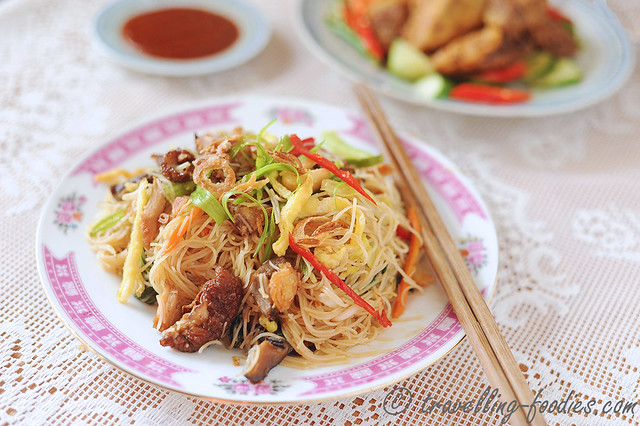 Method
Soak the beehoon in a large pot or mixing bowl with room temperature water until the rice vermicelli becomes slightly soft. Drain and set aside. Make sure not to oversoak the bee hoon or they will not soak up the cooking liquids later. For the same reason, I don’t advocate soaking the bee hoon in hot water or blanching the bee hoon first as well. One easily lands up with overcooked beehoon which becomes too soggy after frying.
While the beehoon is soaking, make the egg omelettes
In a large heated wok with medium heat, add cooking oil.
Crack the eggs into a bowl and whisk slightly to break up the yolks. Add light soya sauce and mix well.
Pour half of the egg mixture into the heated wok and pan fry the omelette. Remove and set aside to cool in a plate.
Repeat with the remaining egg mixture for the second omelette sheet.
To the same cooking oil, add the sliced shallots.
Pan fry under medium low heat until lightly brown and fragrant. Turn up the flame slightly to crisp up the fried shallots a bit and quickly remove from oil and drain in a sieve before spreading them over a plate or tray lined with kitchen towel.
To the same wok, stir fry the cabbage and carrots with the shallot oil. Add salt to help in the softening of the vegetables.
Add the stems of the chye sim and fish cake as well at this stage.
Open the cans of braised pig trotters and pour all the contents into the wok, including all the liquids, oil, bones etc. Using the spatula, break up the bigger pieces or chunks of meat into smaller morsels.
Mix slightly and add the soaked bee hoon.
Using a pair of chopsticks or heatproof cooking tongs together with the spatula, mix the bee hoon the canned pig trotters and other ingredients thoroughly. Season with salt, sugar and pepper at this point. Dark soya sauce is added now, more for colour. Toss until all the strands are uniformly coated with the dark soya sauce.
Add the leafy portions of the chye sim at this stage. Using the spatula, tuck the chye sim under the beehoon, using the trapped heat to accelerate the cooking. The chye sim leaves are added now to prevent them from overcooking.
Sprinkle the beansprouts over the top of the beehoon, turn off the flame and cover the lid for about 5-8 min. The residual heat cooks the beansprouts wilt the beansprouts slightly while allowing them to retain their lovely crunch.
Using this time, cut the egg omelette into long strips.
Before serving, give everything a final good toss. The liquids in the wok should have just being absorbed by the beehoon which should be moist but not soggy wet. If there is still some liquids at the bottom of the wok, simply turn up the flame to medium and toss the beehoon with the spatula and chopsticks for a while more until most of the water evaporates. Adjust the seasoning with more sugar or salt and pepper if necessary.
Garnish with egg omelette, spring onions, chilies and the fried shallots set aside earlier.
Enjoy warm with other dishes, like my grandma’s ngoh hiang and kari ayam. Otherwise, the bee hoon is wickedly good on its own! 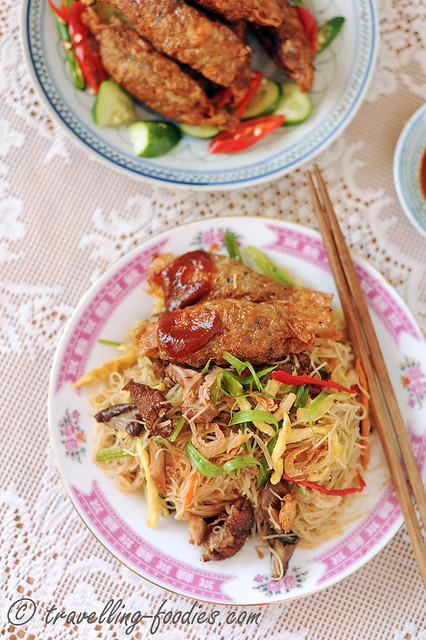