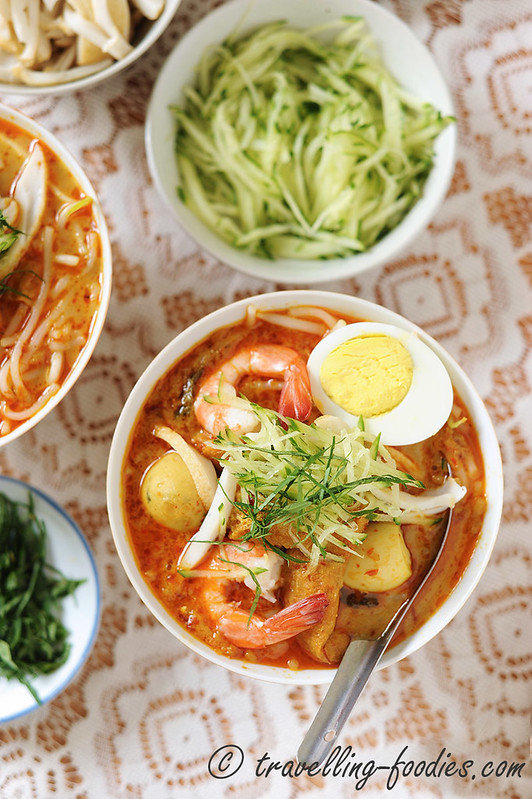 Just last week, in conjunction with the Golden Jubilee, we saw many LEGO-initiated activities popping up over the island. From the free LEGO sets which students in our schools receive , to exhibitions held at Raffles City and National Library, we saw many sights which were once familiar but now gone, being reprised through these little bricks. One particular artifact that struck me the most is “Katong Bakery & Confectionery Co.”. Known affectionately as the “Red House”, Katong Bakery churned out very a many delectable confections in her best years. Amongst my favorites were the old school cream puffs, not quite French but oozing with local flavour and nostalgia. Facing the old Joo Chiat Police Station, it used to be the icon of the Katong-Joo Chiat area, an enclave of the Peranakans in Singapore. Nearby was Tay Ban Guan, one of Singapore’s first “atas” supermarkets, where some of us had our first imported strawberries. Gone too now is Cona, the bakery once famous for their sugee cakes and pineapple tarts, made with love and full of Eurasian flavour. Cona’s sugee cakes were the benchmark of her time, which many bibiks and aspiring homebakers had tried to replicate. The only old guard that still stands along that stretch is Chin Mei Chin, the Hainanese kopitiam, who is still serving up freshly brewed coffee with homemade kaya on toast and old school egg tarts and butter cakes to the nearby community, as well as Catholics after their mass from the Holy Family Church just next door. Sheng Cheng Tau Kwa Pau which used to be at the corner coffeeshop of Joo Chiat and East Coast Road has also relocated since. Once popular amongst the nyonyas, they were ordered from Sheng Cheng and served as a snack during main cherki sessions at home. As the sights and sounds of the clattering bibiks disappeared from Katong, so did these “ho pau“. The “Red House” now stands quiet, gone were the folks who flocked here attracted by aromatic wafts of buttery goodness that permeated from their fresh bakes, just like the old Joo Chiat Police Station across the road, thoroughly gutted and left with only the facade and superficial, marked for conservation and absorbed to become one of the very many condominium projects around the area, once regal but now forever silenced.

Along the same stretch of shophouses was the birthplace of one of Singapore’s most iconic delectables, Katong Laksa. Laksa is an unique dish which is renowned for having many geographical varieties in our region. From Laksa Belut in Perlis to Laksam in Terengganu and Laksa Asam in Penang, it is said that every Malaysian state has their own version. In Singapore, Laksa Lemak is the favoured way of eating, rich in all its “santan” goodness and sold almost exclusively by first the Peranakan Chinese and then later on the Chinese community. Interestingly , it is a dish that has always been closely and strongly associated with the Peranakans and never really took off amongst the Malays over here, unlike their cousins elsewhere in Malaysia. 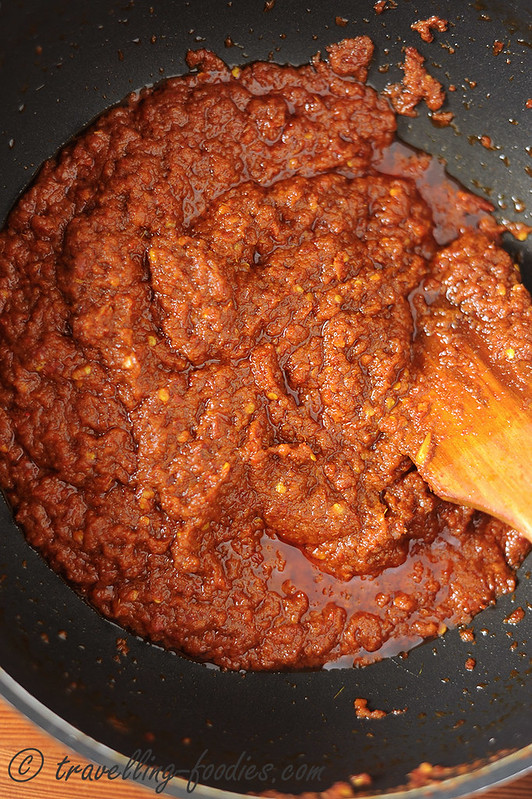 The first folks who sold Laksa as early as in the 1940s in the Katong area was Mr Ng Juat Swee, better known as Encik Jaggut, a Chinese immigrant from Fujian province who came to Singapore during his teens, in search of opportunities and better life. Like many of his predecessors, he later married a local nonya. Of course our local version of laksa, which probably came from Malacca as with many other Peranakan dishes, was already a common fare in local Straits Chinese households then. But before Encik Jaggut, who was nicknamed so for strands of hair that sprouted from a prominent mole under his chin, no one was entrepreneurial enough to set up stall selling this local delight in his time. There was his niche and hence his breakthrough. Since then, many other stalls have sprouted in that area, all claiming to the authentic and original katong laksa, but all of their roots and lineage can be traced back to Encik Janggut.

The heart of this popular noodle dish is the rempah, concocted from the standard mixture of seray, buah kerair, lengkuas, kunyit, cili kering, bawang merah and of course belacan. Together, they are used in the making of the generic rempah which I’d mentioned several times before in this blog. What sets the kuah laksa apart from other dishes which are also “kuah lemak” based and uses essentially the same rempah, is the addition of serbok ketumbair and daon kesom in the simmering of the broth. These two, together with the udang kering, which is pounded or flossed before being sauteed and incorporated in the cooking, are what lend the soup base its unique aroma and flavours most characteristic of laksa lemak. 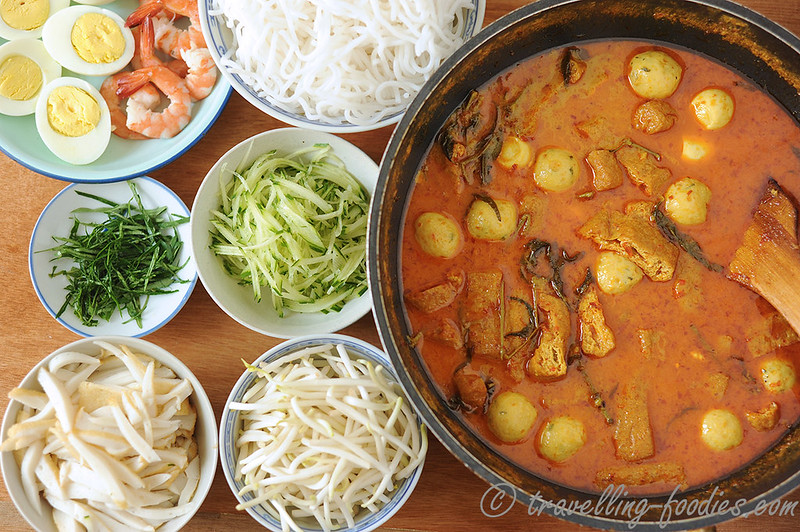 So what is it that makes a laksa lemak become katong laksa then? The subtle difference lies largely in the preparation of the thick rice noodles, snipped into sections which are only slightly longer than the digits of our fingers. This eases the ways of eating, requiring only a spoon soup for the task, doing away with forks and chopsticks. The noodles and beansprouts are also not blanched in a pot of boiling water but directly with the laksa broth instead, ladling the simmering kuah over these two ingredients which had already been placed in a bowl. The kuah laksa is then strained off by cupping the ingredients with the large ladle while tilting the bowl carefully to allow the broth to flow back into the cooking vessel. The process is repeated a few times for the noodles which are essentially cooked anyway to soften slightly, as well as to allow the broth to adhere onto the strands of noodles and sprouts more effectively. Also this method of quick blanching the bean sprouts helps them to remain crisp and crunchy.

As with many good recipes, there are secret ingredients which are kept away from the conventional and katong laksa is no exception. Apart from what is mentioned above, there is an additional ingredient which is added into the kuah laksa to bring it to the next level but unfortunately, I have promised my friend who is somewhat related to Encik Jaggut not to divulge. Otherwise, the recipe for laksa lemak would suffice to concoct a really wicked katong laksa, just not stellar as it would be with the missing ingredient. 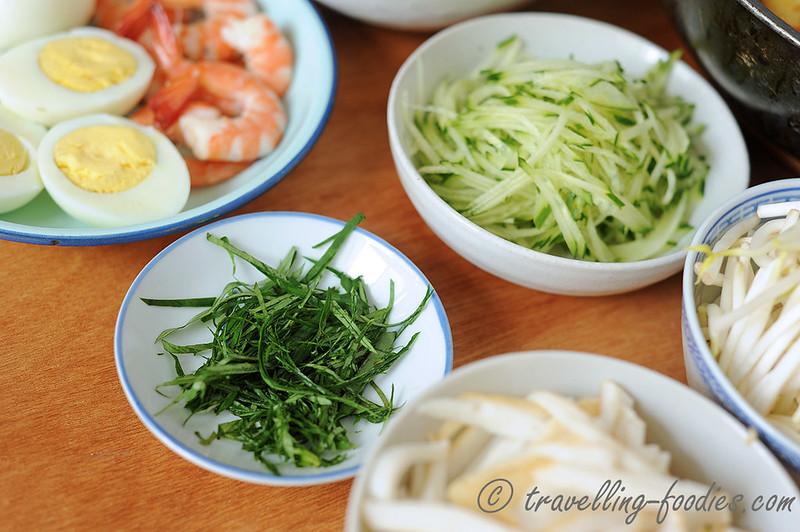 Daon kesom (daun kesum) is the heart and soul of a good bowl of katong laksa. As mentioned earlier, a generous portion of these fresh Vietnamese mint leaf stalks are added into the simmering broth as well as some finely julienned leaves are added as a garnishing to refresh the flavours during serving. Apart from the cucumber, fish cake, hard boiled eggs, prawns which embellish the top of the noodles, a bowl of laksa is not quite the same without some fresh daon kesom. 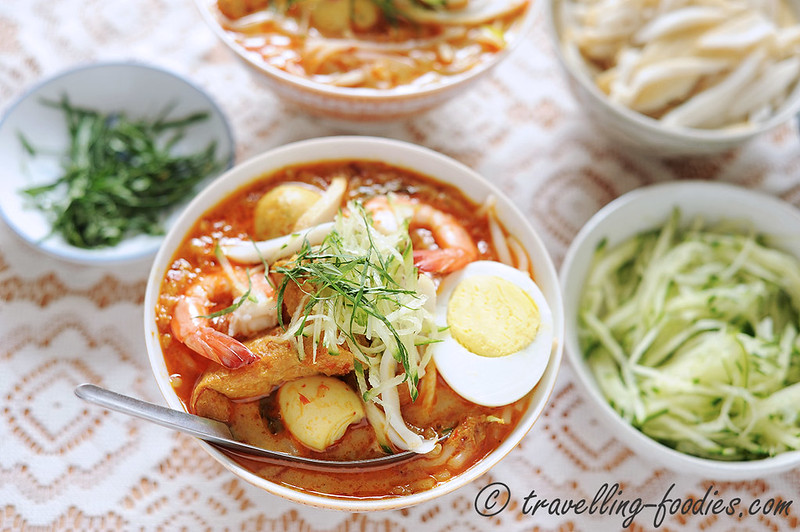 The recipe for katong laksa is essentially the same as that of “laksa lemak” which I’d posted last year on this blog. Just remember to (1) cut the rice noodles into shorter strips for ease of eating with just a spoon, (2) blanch the noodles and bean sprouts in the simmering kuah laksa itself and not separately in boiling water.