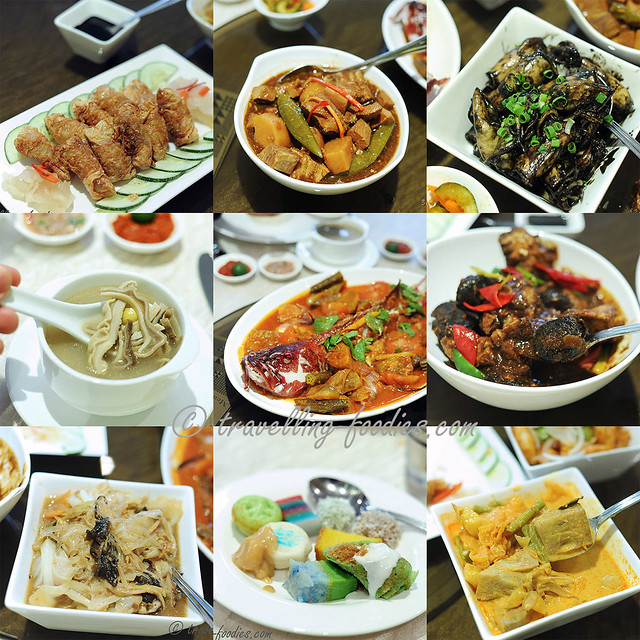 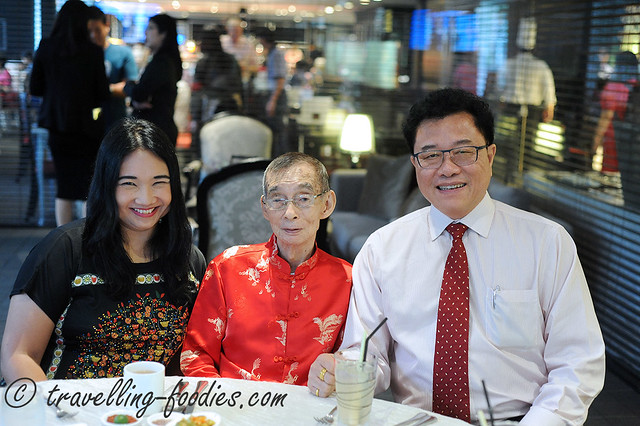 Just a couple of years ago, Baba Jolly helped curate a spread of delectable Peranakan fanfare as part of Spices Cafe’s “Singapore Flavours Buffet”. Despite being already 83 years old then, there was no stopping or resting for him. In the kitchen at the hotel, he was said to have supervised under tight and careful scrutiny until Concorde’s own cooks got it right down to the old Peranakan chef’s precise and sometimes seemingly impossible-to-achieve specifications. Others call it being stubborn and difficult to please but to Baba Jolly, who is widely regarded as one of the older generations of Peranakan chefs who helped brought Straits Chinese cuisine onto the restaurant tables both locally and abroad, this is sheer passion. 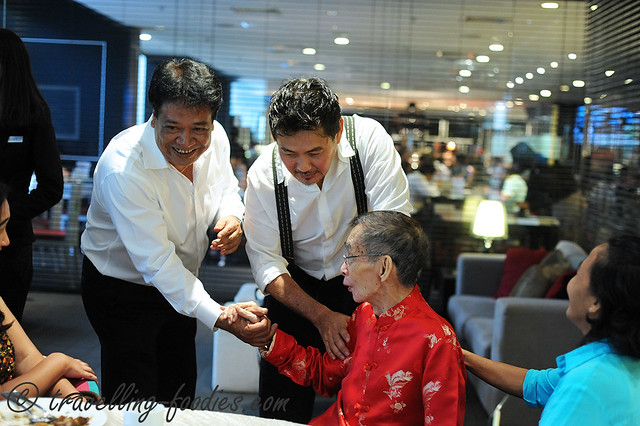 All smiles and laughter, as Baba Jolly was pleasantly surprised by the friends who turned up. Here’s Mervin, his son with his childhood friend turned close family friend of the Wees for more than four decades now! 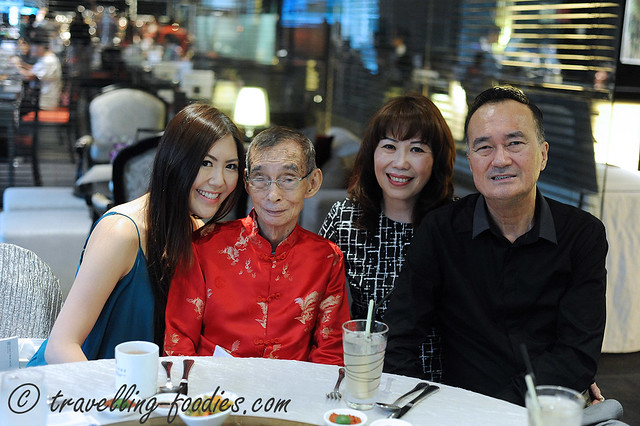 Baba Jolly here with one of his sons, Dennis Wee of DWG, daughter-in-law Priska and granddaughter, Daphne. 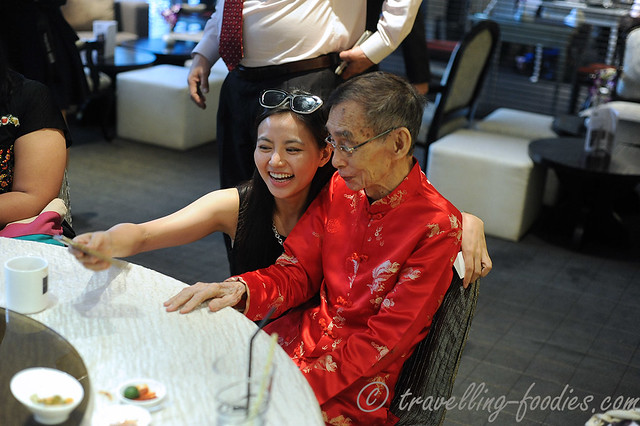 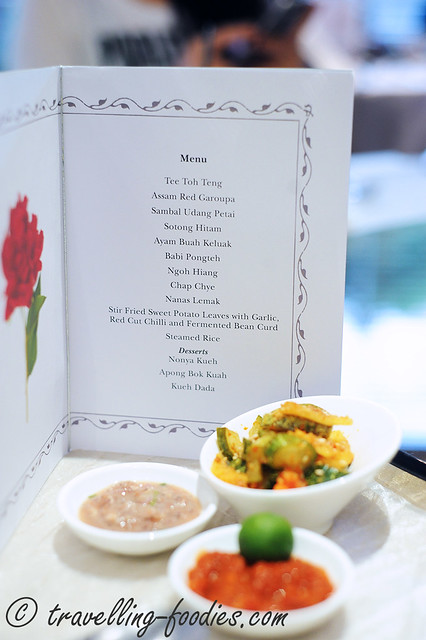 While waiting for the guests to settle in, I had a quick peek at the menu of this specially created luncheon, which was more than enough to send me “ayer liou meleleh” as a Peranakan would put it, i.e. mouth-watering incessantly. Many of these dishes are said to be Baba Jolly’s favorites, and incidentally they are mine too! 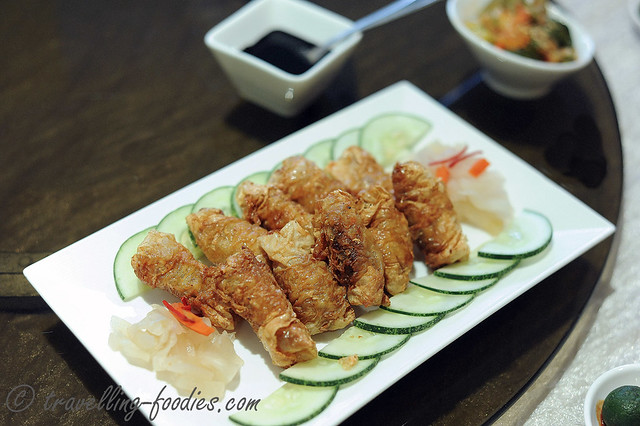 First up was Ngoh Hiang as an appetiser, fried as individual bite-size morsels with the beancurd skin uber crisp while the meat filling remains succulent and rather flavourful. 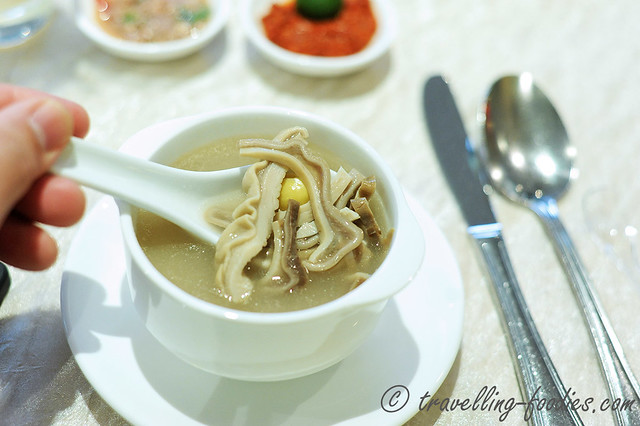 Then we had “Tee Toh Tng“, or better known as “Kuah Perot Babi” to our local babas and nyonyas, with pieces of pig’s stomach in a peppery broth. The pig’s stomach was well processed and wonderfully cooked, void of any unpleasant odours which offals are notoriously known for, and pleasantly soft yet with a slight chewy texture. The soup was also embellished with gingko nuts as how it is traditionally done for certain dialectal communities, and not necessarily the Peranakans. 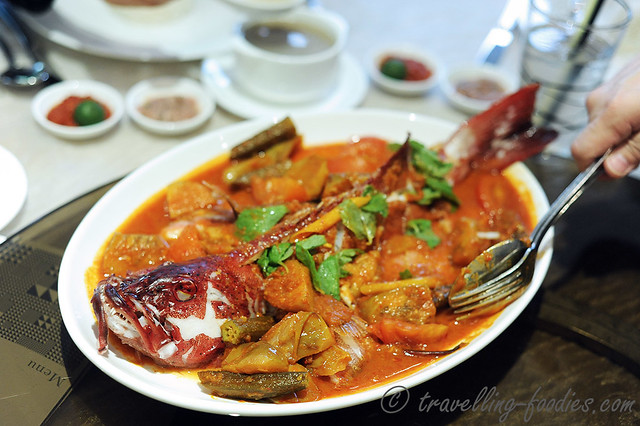 As we were enjoying the soup, Ikan Assam Pedas, a spicy and sourish vegetable and fish curry was served. The large fresh red garoupa was perfectly steamed, upon which the cooked vegetable curry comprising of brinjal, okra, tomatoes, pineapples, not forgetting a well-concocted rempah (spice mix) was generously drizzled over. Though unconventional, I found this way of presenting asam fish to be highly workable in preserving the freshness of the steamed fish bearing contrast against the robust flavours from the spicy and sourish stewed vegetables. 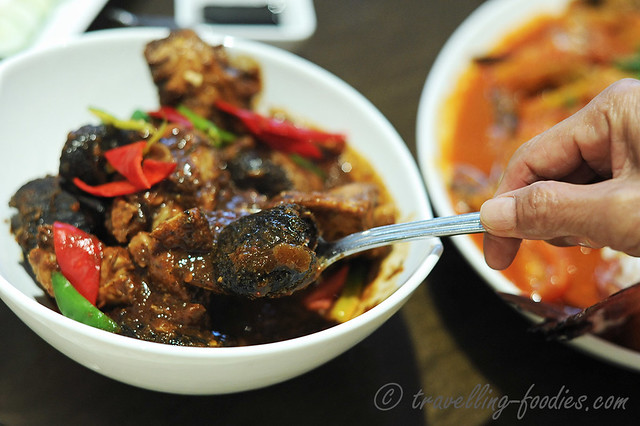 Then there is Ayam Masak Buah Keluak, the quintessential dish on any Peranakan dining table. The chunks of chicken were beautifully stewed in the “kuah gerang asam” embellished and heightened by the flavours from the Indonesian Black Nut. This dish alone, warrants multiple helpings of rice and sambal belacan to go along. 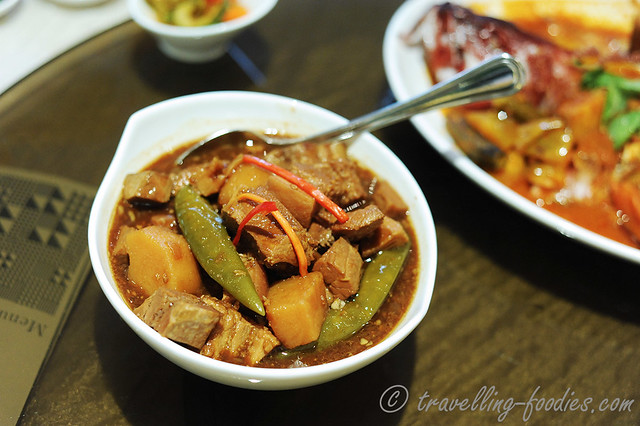 Babi Pongteh, a dish which was customarily used as a “laok semayang” for ancestral worship in the past has become so popular that they are easily found on the menus of many established Peranakan restaurants nowadays, and Spices Cafe is no exception. The chunks of pork belly were stewed over a prolonged period of time until the bits of fat turn into wonderously wobbly collagen and the meat so soft that it melts almost instantly in the mouth. The taste of taucheo was assertive, just as a good pongteh should be. Interestingly, the sauce had a very slight hint of heat, probably from the green chilies which were added into the stewing process, when they are usually broken fresh just upon serving otherwise. Though purists would probably frown upon the idea, I most certainly don’t mind the edge of spiciness since Pongteh is traditionally eaten with a good dose of sambal belacan anyway. 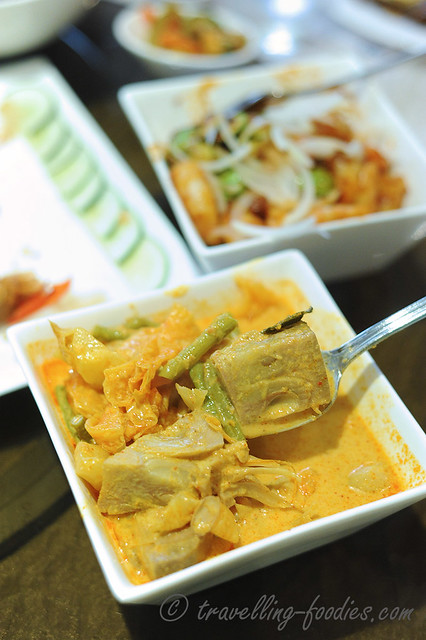 Despite nenas lemak being stated on the menu, Nangka Muda Masak Lemak was served instead, as part of a sayor lodeh and I most definitely do not mind and nangka muda is my absolute favorite! The spicy sauce was packed with the “lemakness” from coconut milk but not overpowering. The cubes of young jackfruit was carefully stewed to perfection, soft enough to yield with the slightest pressure of the tongue yet retaining sufficient bite for good palate sensations. Likewise, the other vegetables like cabbage, long beans where cooked amply to compliment the jackfruit as a whole. 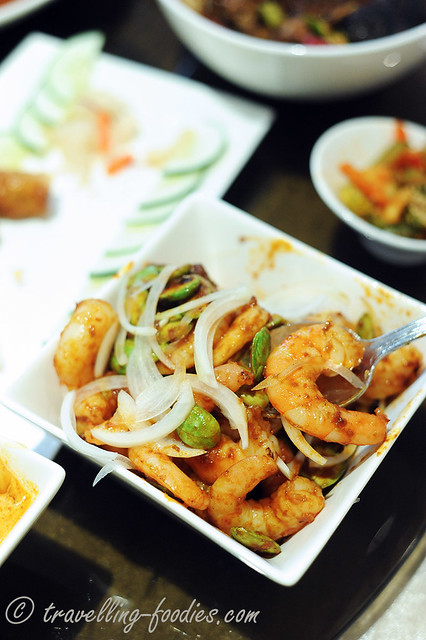 Sambal Udang Petai was also quite well executed with the prawns remaining quite crunchy and succulent. My only grouse probably was the sauce which could have been more spicy for more oomph. 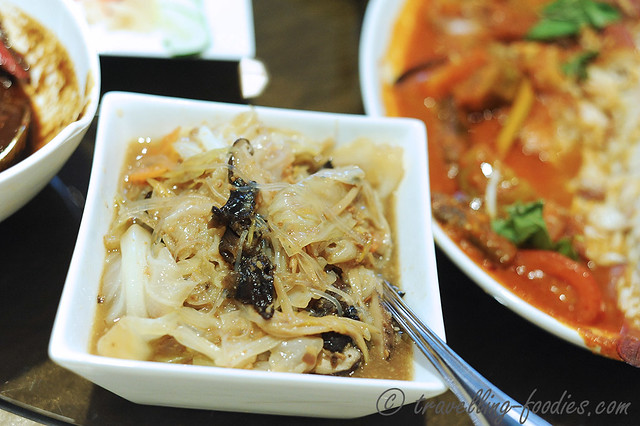 Chap Chye was also well done, with the cabbage stewed until it is very soft. Likewise, the flavours from taucheo, characteristic of the Peranakan version of this Chinese cabbage stew was much appreciated. I especially love the crunch from the kim chiam as well the bok hee which had turned all gelatinous from the prolonged stewing. 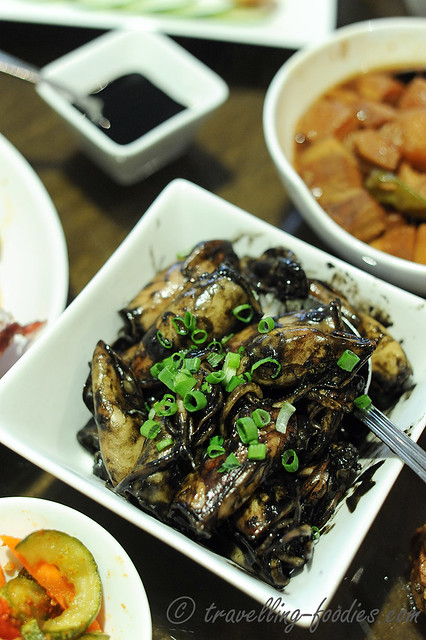 Spices Cafe’s rendition of Sotong Hitam was interesting to say the least. Unlike the Peranakan-Malay version where the baby squids are cooked in a sourish sauce made from tamarind pulp, the version we had at the luncheon was drier than usual. Also, it is void of the tangy hues one would expect from this popular dish. Whatever that is lost from being traditional, the chefs behind the kitchen of Spices Cafe made up for it with wonderful wafts of wok hei, which was so apparent in this dish. Take away any hopes for it to be authentic, this rendition of Sotong Hitam can actually be seen as a reinterpretation of the old dish, one which is very much welcomed, and also very delicious. 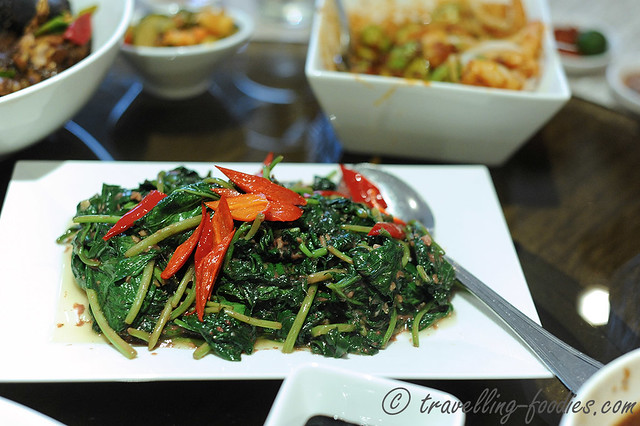 Then finally there is a sweet potato leaves and fermented beancurd (foo yue) stir fry which I didn’t get to taste as I was busy taking photos, not to mention that there was simply to many other yummy dishes to sample. Compared to the others, this is probably the weakest link in the entire menu as a dish which is remotely associated to the Peranakan cuisine to begin with. 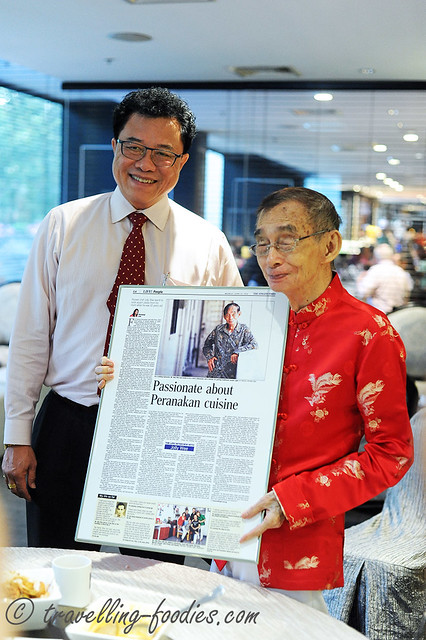 The hotel management also took the opportunity to present Baba Jolly with a framed copy of the newspaper article on him. This token of appreciation as a mark of accomplishment for the resounding work done by the pioneering Peranakan chef and exponent of the cuisine could not have been more apt. 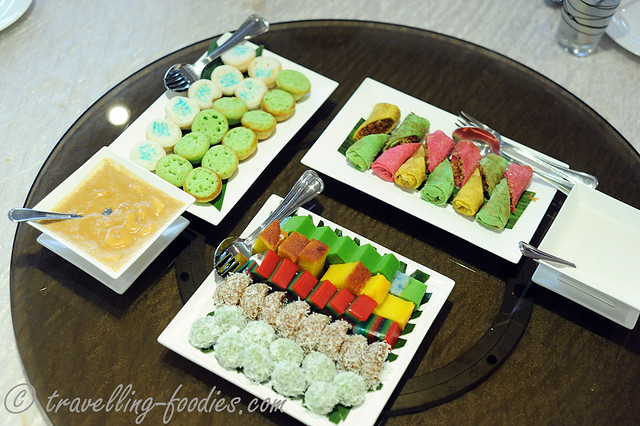 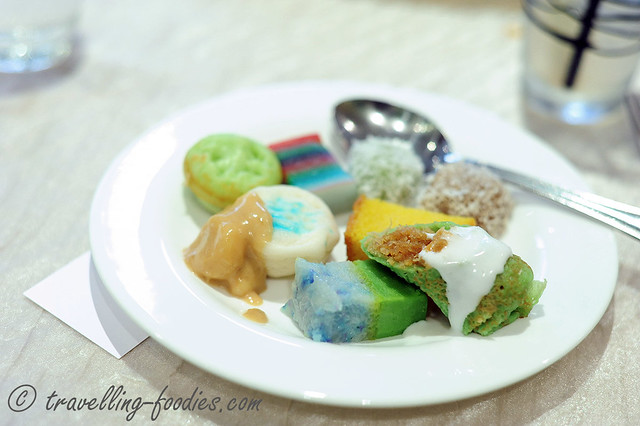 The kueh dadar was yummy with the sweetness of the moist inti klapa parot (grated coconut filling) against the savory kuah santan (coconut cream sauce), and so was the kueh koswee which was really soft. Ondeh ondeh is always a crowd pleaser as the gula melaka sauce explodes in one’s mouth with each bite, though the glutinous rice skin could really be worked to be a tad thinner. The other kueh were pretty standard though I must say that flavours of the kueh chara could do with a bit more “pandan-ness” in it, and the apom bokwa despite being the epitome of Peranakan dessert making, tasted somewhat off. Perhaps it has to do with the fermentation of the rice flour batter or in this case, the lack of it.

Overall, I feel that the Spices Cafe has done well in their efforts to usher Peranakan cuisine as part of their SG50 heritage buffet. For most of what I had tried, the dishes taste polished and the execution was good despite some misses. Brushing the notion of authenticity aside, I am pleasantly surprised by how many of the dishes were prepared and presented, with Ayam Buak Keluak and Nangka Muda Masak Lemak scoring high on my list, and Ikan Asam Pedas trailing not too far behind. However, I was told that the presentation of the dishes would be necessarily different in the buffet setting compared to the banquet table one we enjoyed that day, and most understandably so. As such, I’m curious as to how the other dishes and delectables which are not part of the Peranakan cuisine offered in the buffet would fare, or if they would run in an concerted effort in terms of standards and fluency. Only one way to find out, that is to make a reservation at the Spices Cafe to try out their full spread! And what better time to do it, than this as Singapore celebrates her Golden Jubilee! 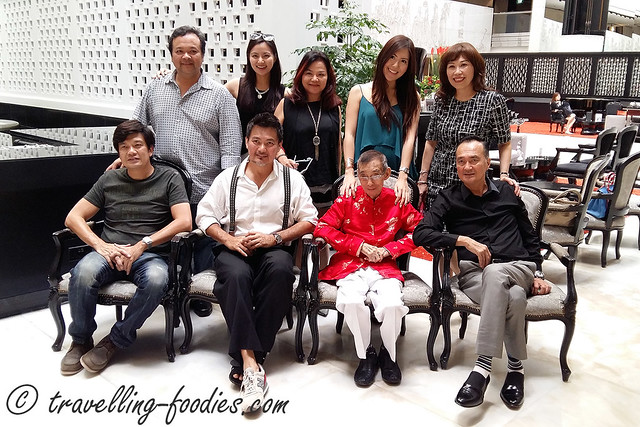 From the first taste of entrepreneurship selling rice cooked from tin cans during his childhood days in Joo Chiat, one of the enclaves of Peranakan culture in Singapore, to where he stands now, almost 80 years later, Baba Jolly mentioned to me casually over the dining table that his life has “ran its full course and is now in its last chapter”, with a tinkle of melancholy in his eyes. But the moods changed quickly as he shared animatedly his “upcoming project” to help a friend with a new F&B joint due to open in Pasir Panjang where nasik lemak would be served in the traditional “Nonya style” complete with dishes like sambal udang and served over a banana leaf, just as “how nasik lemak should be”. So as you can see, there is indeed no stopping for him at all, as we patiently await what culinary surprises Baba Jolly has set in place for us to come.

This is a media-invite review. A big thank you to Concorde Hotel Singapore for your hospitality and opportunity to dine with Baba Jolly Wee and his family members on this special occasion.