There are some dishes which I cook over and over again for my daily meals. Some of these are purely out of simplicity, allowing the laziness in me to take over, so that I don’t have to think to much or fuss over what to have for a weekday lunch. But some of these dishes are revisited over and over again because of the memories they carry. Many of these are comfort foods, dishes which I’d been eating all these years since young when my mother was still around. And now that she is gone, these dishes invoke a profound sense of nostalgia，reminiscent of the times we’d spent together cooking, the sights and sounds, not forgetting smells from our small kitchen. Thankfully over the years of cooking together, I’d learnt from her and consolidated a small but decent repertoire of dishes which we’d prepared together and enjoyed tremendously, dishes which I cook over and over again, archiving the flavours and fueling memories… 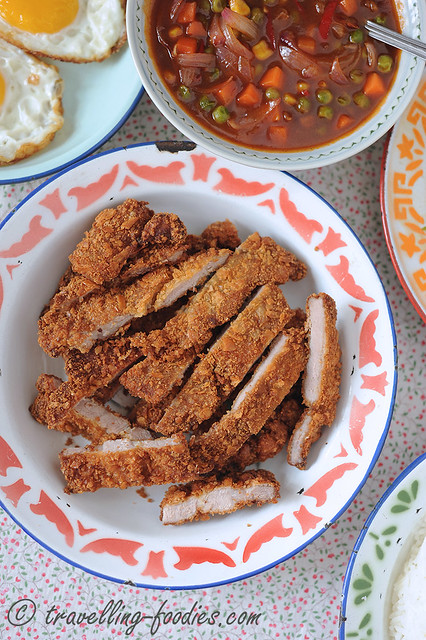 We eat pork chops quite a lot when we were young. Always a treat for my sister and I, our hearts set racing when we hear the all too familiar sizzling from the oil wok as they are being deep fried, sending wafts of aroma which permeate every corner and fill up every crevice of our humble home.  Times back then were tough, but they were also good as mother doted on us, cooking for us whatever we loved to eat, despite whatever little we had to make do with. Simple pleasures like a sunny side up with uber crispy frills on the edges, made complete with just tau yew drizzled on top, served with an enamel plate of steamed rice. Life was difficult but simple, with little wants. How I wish I could turn back the clock… 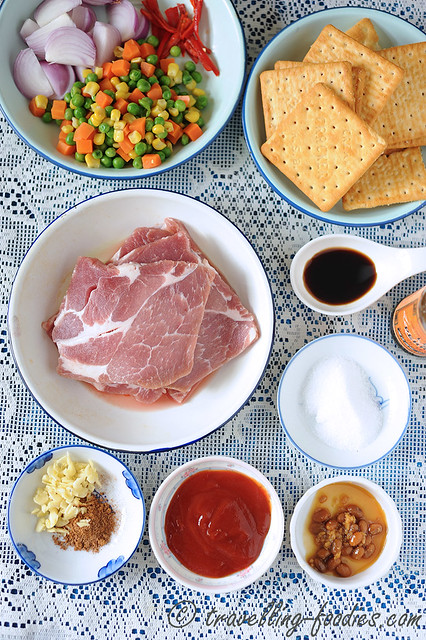 The ingredients’ list for Hainanese Pork Chops is quite a handful, some for the marinade and others for the sauce. The meat has to have a bit of fat to be tasty. So, shoulder butt is a decent cut to use. No lean loin please. They don’t do justice to the dish. 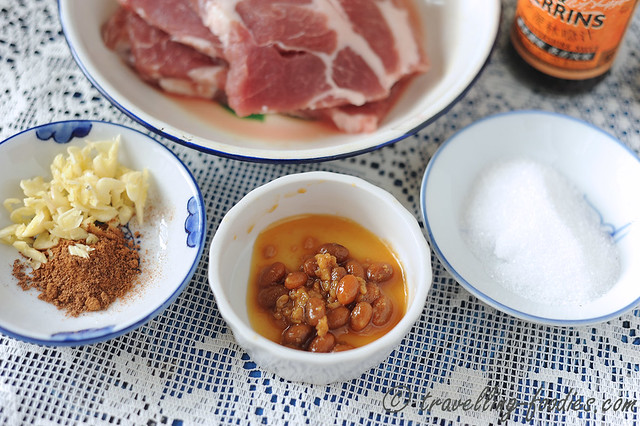 The marinade is simple with a few key ingredients. One interesting thing which I see my mum used was mashed up ferment soya beans aka taucheo in place of salt or soya sauce. All these are mixed thoroughly with some water or egg white to a small amount corn starch which created a paste-like slurry that allowed the marinade to adhere onto the meat better. A dash of sesame oil is usually added but sometimes I would forget, without altering the overall flavours by too much. 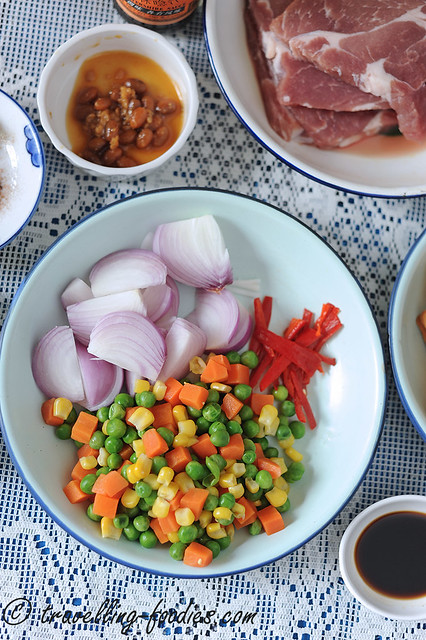 The choice of vegetables is what defers in our family’s Hainanese Pork Chops compared to the traditional recipe. Instead of just peas (petit pois), my mum used a variety of mixed frozen vegetables which also include corn kernels and diced carrots. Not because it tastes better but it makes more sense to use the mixed packet which appears all so frequently in our fried rice. It is also the perfect excuse to get the children to eat a larger variety of vegetables. No big harm done there by not sticking to just peas. In recent years, I also like to add one sliced red chili, not just for a slight hint of heat in the sauce, but also making it more aesthetically pleasing. We omit the chunks of potato which are customarily in the traditional Hainanese Pork Chops served by the Hainanese chefs we call “chong po” to their colonial masters before they “retired” from service during the post-war years and begin setting up kopitiams selling traditional Hainanese black coffee and kaya toast, not to mention mixed vegetable rice stalls all over the island with the all time favorite Hainanese curry chicken or sometimes lamb and … you’d have guessed by now, deep fried pork chops. I reckon that was how this dish improvised and tailor-made for the British made to the heartlands, and learnt by my mother somehow who reproduced it on our dining tables. Potato is left out because this dish is almost always eaten with rice deeming the extra carbs unnecessary. If hardcore tradition is what you are after for, stick to peas and potatoes. For me, this dish is not just a tradition, but a memory. 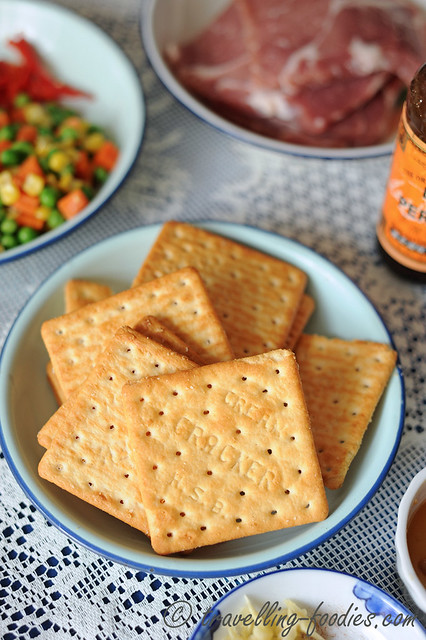 The heart and soul of good Hainanese Pork Chops come from cream crackers, crushed and used as a coating for the pork chops before being deep fried. The default brand we buy is “Hup Seng“, otherwise known in the family as the “cap ping pong” soda biscuits. These produced by Hup Seng are much more aromatic and somewhat more buttery than those from Khong Guan or other brands. I remember fondly helping my mum “tumbok” the crackers with our old batu lesong placed over an old rag to buffer the impact and noise, as I sat on the kitchen floor with retro mozaic tiling. 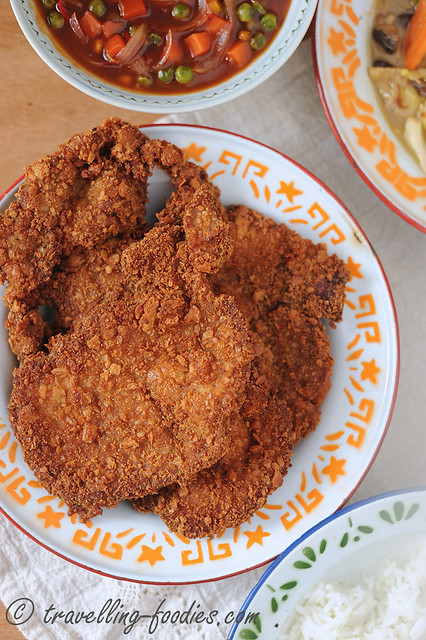 After a good few hours of marinating, the pork chops are ready to be deep fried, but not without first dipping the flavoured slices into a lightly beaten egg wash, followed by a generous coating of crushed soda biscuit crumbs. The brand of oil is also a “major concern” in our household. “Knife Brand” or “cap piso” it had always been, until recent years that is for the oil from this brand now is a mixture of palm oil with other whatnots. We have switched to other brands of oil now but the method for preparing this old dish remains unchanged. The oil is first heated slightly and tested with one or two larger pieces of biscuit crumbs. When these small cracker morsels begin to sizzle on the sides and float to the surface, the oil is ready to go. The coated pork slices are carefully slided into the oil and one side is deep fried over medium high heat to a light golden hue before flipping onto the other side to do likewise. The first side is then flipped over again for the golden hue to intensify slightly before being drained and left to cool down.

While the fried pork chops are allowed to rest for a while, the sauce is then prepared, first sauteeing the onions and garlic until fragrant before pouring in the vegetables which are given a quick stir fry, and finally the mixed concoction of drizzling sauce. 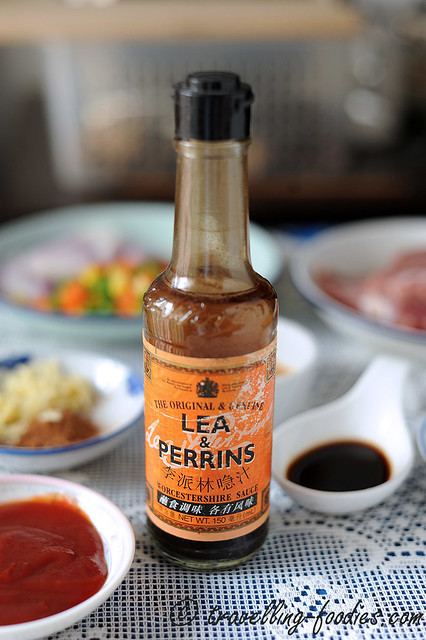 The most important ingredient in the pork chops drizzle is worchestershire sauce, a fermented condiment which lends so much umami flavours to the sauce and therefore irreplaceable. Lea & Perrins is the brand to go but of course others would probably work as well. It is mixed with a generous portion of ketchup and sugar, creating such a complex melange of beautiful flavours that makes the sauce moreish.

The sauce is finally thickened with a bit of cornstarch or flour water, before being drizzled onto the fried pork chops just before serving. It can also be served alongside which allows the pork chops to stay crisp over a long period of time. 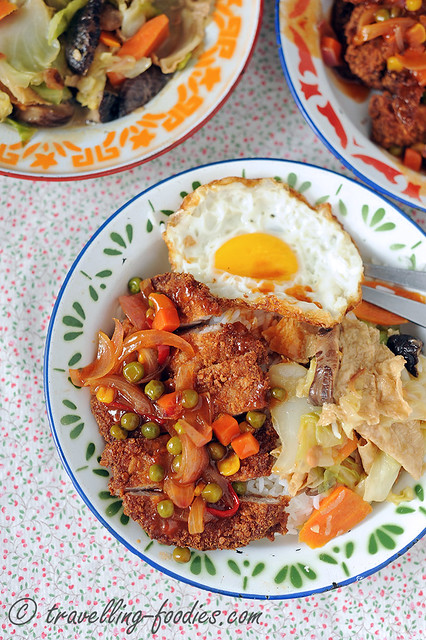 Hainanese Fried Pork Chops is definitely one of my “to-go-to” dishes whenever I want to take a walk down memory lane to revisit those flavours which reminds me of the wonderful times I’d spent with my mother in the kitchen. If you too enjoyed Haianese Pork Chops when you were young and is hoping to relive the experience, you may wanna give this recipe a try. Click the link below for the recipe.