What constitutes a good chuchi mulot then? For me, it has to have several things. Firstly, it must bear contrast to the dishes served earlier in the meal, both in texture and flavour, often the now-sweetness against the then-savory, or the cooling to soothe and tame the earlier spice and heat. Secondly, the components in a chuchi mulot, ideally should also show distinctive variance amongst one another, being multi-dimensional, flavours layered, each building upon the other. Yet despite the seeming differentiation, the chuchi mulot should remain concerted as a harmonious conglomeration, bringing the meal to a resounding finale. Seemingly difficult to achieve, there are many a chuchi mulots within the vast repertoire of Peranakan desserts and kuehs that do precisely as I’d described, when carefully executed and finely made that is. Kueh Sarlat is one such fine example. And as if it is not exciting and enriching enough as it is, Kueh Sarlat Durian, with the twist of the much-loved tropical fruit incorporated, takes it up a notch and brings the chuchi mulot to the next level. 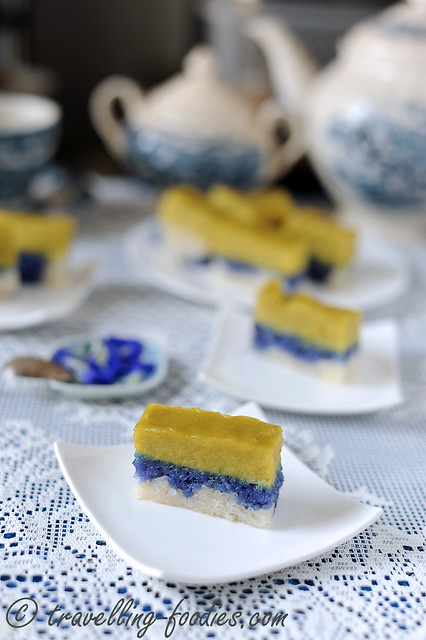 Kueh Sarlat is an immensely popular Peranakan chuchi mulot in Singapore. As I’d mentioned in my recipe post for Kueh Sarlat, it takes on “multiple identities” depending on which community or ethnic group you belong to. To the Malays, it is “Seri Muka” while it becomes “Gading Galoh” to the Peranakans in Malacca or “Pulot Serikaya”, amongst other permutations like “Puteri (Putri) Serikaya” or “Kueh Serikaya” or even “Puteri Sarlat“! I’d even seen one shop in town which spelt it as “kueh saalat”! Yes the one which sells each “wedge” of their “kueh saalat” at a notorious price of 5 bucks a piece! Like its numerous names, there are many variations of this kueh. In its rudiment form, the base is usually a steamed glutinous rice layer enriched by santan, while the top is a rich and wobbly custard. I reckon that this is the basic version which is known mostly as Pulot Serikaya. Then came the pandan version where a beautiful jadite green takes over the otherwise luscious golden hue. And of course the fun doesn’t merely end here. Apart from the pandan version, I particularly love kueh sarlat durian with fresh durian pulp added into the custard, heightening the creamy textures and providing the unmistakable complex cocktail of aromas and flavours from the king of fruits into the game. One either likes it or loathes it. I don’t just like it… I love it! 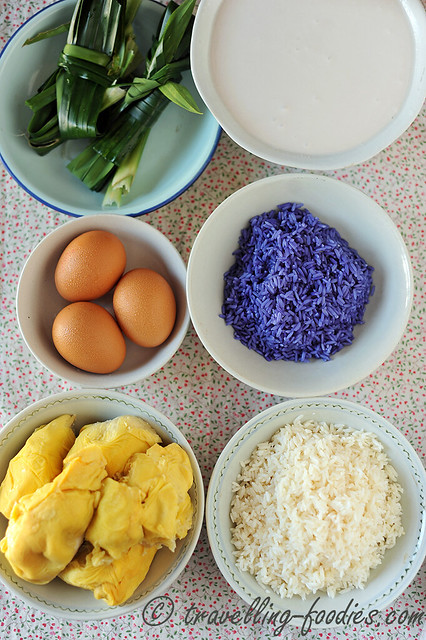 The ingredients for Kueh Sarlat Durian is merely an extension of the standard Kueh Sarlat aka Gading Galoh, with only one sole “new kid to the block”, none other than fresh durian pulp of course. 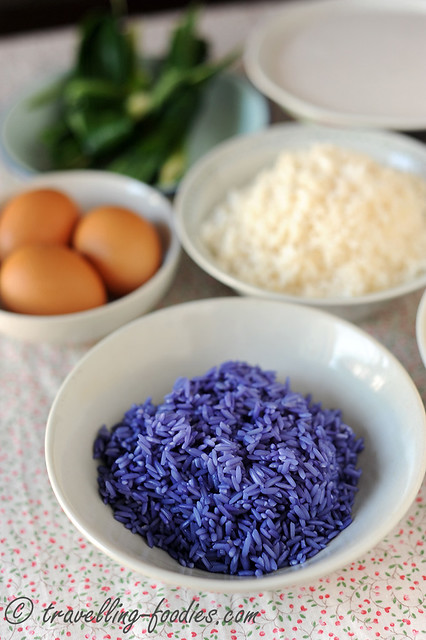 The glutinous rice is rinsed thoroughly before being soaked for at least 4 hours. I leave mine overnight over the kitchen counter, all plumped and ready to be steamed the next morning. As with many Peranakan kuehs, part of the glutinous rice is stained to become a gorgeous sapphire blue through the use of bunga telang or known otherwise as the blossoms of blue pea or butterfly pea.

There had been quite a bit of talk in recent months over the shade of blue which is deem “appropriate” for use in Peranakan kuehs. One or two of these self-appointed “custodians” of the cuisine are driving the notion that the shade of blue seen in kuehs of the yesteryears, or what they like to call all too fondly, “during my grandmother’s time” were “much more subtle” compared to what is seen in current day renditions, which they probably deem as being too loud and gawdy, and fervently campaigned for a renaissance of some sort, to revive and in their words “resurrect” the ways of the old. Well, it seems like such insistence and efforts had fallen “mostly to deaf ears”, with the bibiks and nyonyas I know continually making kuehs like pulot tekan and apom berkuah with a very prominent shade of blue. Well, these “food historians” seem to forget that much like how the baju panjang had fallen out of favour against the rising popularity of the baju kebaya in the early half of the last century, any food culture and with it all its culinary practices will evolve with time, developing and reinventing along the way, with modifications and improvisations made as adjustments to changing palate preferences, availability of ingredients and of course technology. As the Peranakan community and its people evolves, it seems rather ludicrous and laughable to wish for the cuisine to be preserved and fossilised as how it was cooked a century ago. Much like how Don Quixote fought the windmills to stop the “giants” from spinning.  Funny but futile… 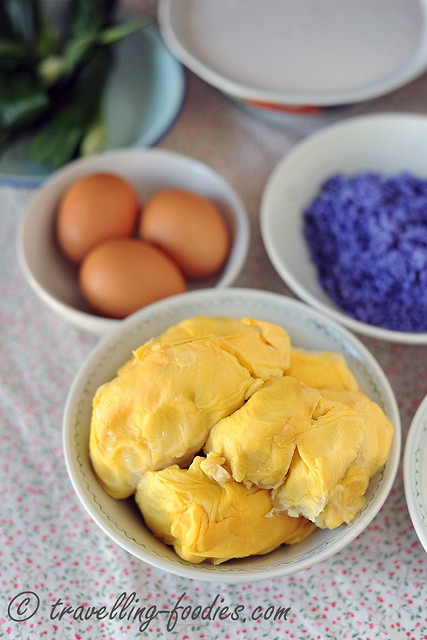 Durian takes centrestage in this piece. The choice of durians is somewhat personal. Old hands in kueh making will tell you that the durian used for kuehs like this and apom balek are usually made from durians which are generally lesser desired for eating. This is echoed in cuisine as well as, like tempoyak a fermented durian condiment commonly served as a laok piring is typically made from lesser quality fruit. I have a penchant for durians which are more “bitter” than sweet which are incidentally those which are also more aromatic and thus suitable for kueh making. As such, I flouted the “rule” and used rather good durians instead, small seeds with thick and creamy flesh, a very good balance of bittersweet flavours making them very good for eating. But as I’d said, it very much depends on the individual. 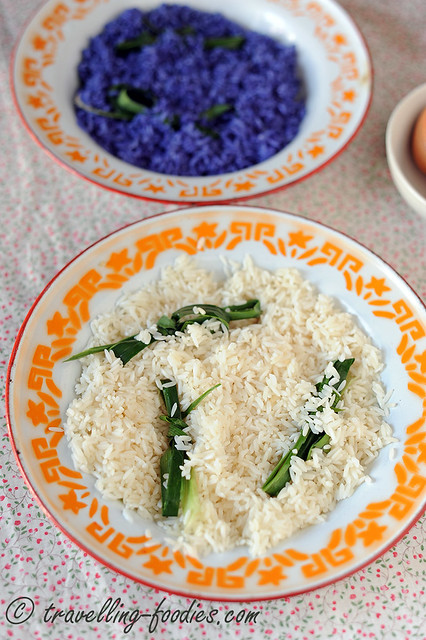 The presoaked glutinous rice is spread out over enamel plates and ready for steaming. Small bundles of shredded pandan leaves are embedded to lend their aroma unto the grains, a practice which perpetuates many if not most types of kuehs. In retrospect, this seemed rather futile as the taste and smell from the durians would have easily masked every other flavour or scent along the way. I guess old habits die hard…

Coconut milk is drizzled onto the rice in two additions, first at the beginning before steaming and then the remainder halfway through steaming after the rice is taken out from the steamer and fluffed with a fork. This helps to ensure that every grain is well coated with coconut milk and cooked thoroughly. 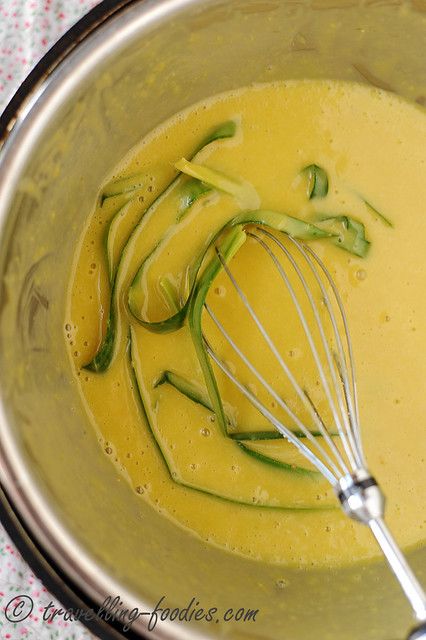 While the glutinous rice is steaming over high heat, the durian custard is prepared, using the same trusty recipe I’d been using for kueh sarlat but with a slight adjustment made to incorporate the durian. The mixture is cooked over a bain marie until the custard begins to thicken and become more viscous as it gets progressively more difficult to work the whisk through the liquids.This takes place when the mixture is heated to about 70 degrees celsius, when the egg protein begins to cook and the starch in the mixture starts to react to the heat as well. Yes there is a starch component in this recipe in the form of plain flour and cornstarch. Rice flour would probably work as well, though I’m not entirely sure about using sago or tapioca flour. Whichever flour concoction one chooses to use, the serikaya layer should just barely set upon steaming and cooling, with the custard still so wobbly and uber soft. The last thing one wishes for is a hard and chewy layer of serikaya.

Again some purists would advocate a “flourless” kueh sarlat being the ultimatum to kueh making. Well, I’m perfectly happy with a little starch added as long as I get the texture of the custard to be exactly how I want it to be， and my folks and friends enjoy the kueh sarlat I’d made. The smiles of gratitude and words of appreciation are all that matters for what is to be the ultimatum kueh sarlat. For me that is… 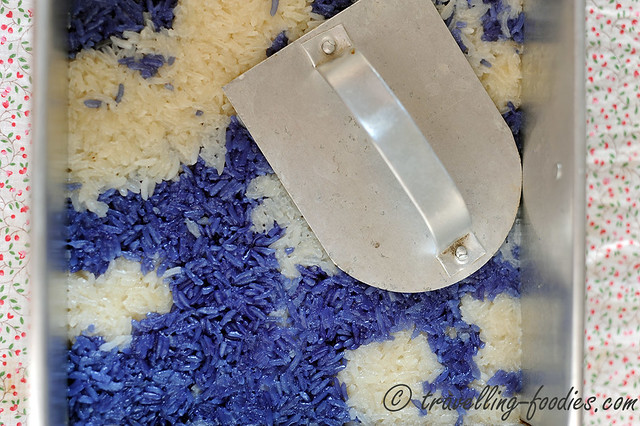 Once the glutinous rice is done steaming, the two portions are then transferred to a 7 inch square baking tin and compressed with a press for kek lapis. The grains should be “perfectly cooked”, i.e. soft and fluffy yet still individually intact but without being mushy.  If it was for pulot tekan, the rice needs to be compressed for several hours until it is uber firm but for kueh sarlat, pressing the mixture until it is nicely compact to hold the custard above it without seeping through the grains should suffice. That said, I’d seen a version of kueh sarlat made by one of the “food historians” I mentioned above where the custard has gone into the glutinous rice layer as he was probably less fastidious than he should be about the “tekan” process. Not pretty at all if you ask me, or as a bibik would probably exclaim upon seeing such a disaster, “koosmangat!”

Keep a close eye on the details in the procedure described above and one should be on the right track to make a reasonably good kueh sarlat durian. If the first one fails to make your mark, troubleshoot and try again. There is no dummy proof recipe that would guarantee one to a perfect kueh sarlat, but only hard work would guarantee his success in making one to come. 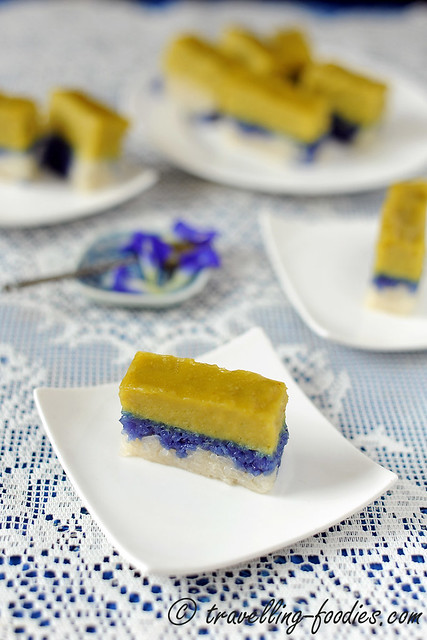 Kueh Sarlat aka Seri Muka Recipe （for a 7″ square pan)

the bottom pulot layer is the same recipe as the usual kueh sarlat or gading galoh which I’d used and blogged here and here. Please refer to the links for the recipe.

In a food blender, blitz thick coconut milk with durian pulp until smooth. There should not be any obvious fibres left, for a silky concoction to be made later.
In a mixing bowl, beat the eggs to break the yolks before adding all the other custard ingredients and mix well.
Place the mixing bowl over a water bath and stir continuously until the mixture begins to thicken. The temperature of the mixture should hover around 65 to 70 degrees when this happens. Remove and discard the pandan leaves.
Pour the thickened custard over the compressed glutinous rice layer in the steaming tin and prepare for steaming.

The steaming instructions are the same as those found for Kueh Sarlat or Pulot Serikaya as found here and here. Please refer to the links for the instructions.