The weather has been somewhat erratic and unforgiving of late, tormentous heat wave for the last 2 weeks or so making the days go by in an utmost unbearable manner and then came the torrential rain yesterday afternoon. Despite the downpour, the cool-down it provided was only short-lived and temporal as it is back to another stuffy and hazy day. In need of something cold and refreshing, I made another favorite Peranakan chuchi mulot of mine for some instant relief. Looks like I’m on a dessert making spree! Sago Gula Melaka is incredulously easy to prepare and can be made way ahead. Just barely 30 min of work last night before going to bed and I’m ready to indulge in all that santan and gula melaka goodness this afternoon! 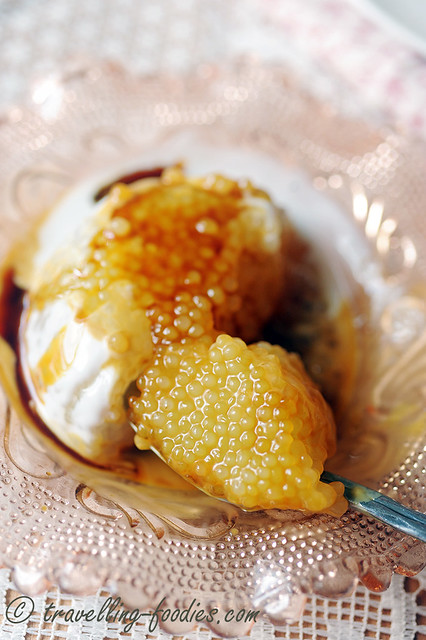 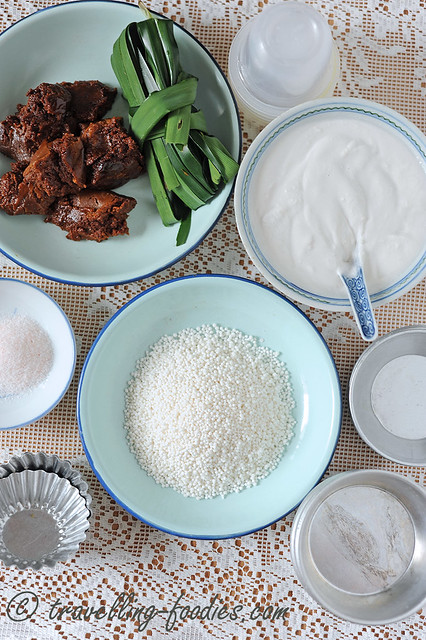 The ingredients are confined to a small handful, making this very manageable to prepare at home. It is however more than the “simple three ingredients recipe” which some folks have claimed it to be. Apart from the trinity of bijik sagu (sago pearls), santan pekat (coconut cream) and gula melaka (palm sugar), one also needs a generous dash of salt to compliment the coconut cream. In many of these three ingredients recipes, the salt “cleverly forgotten”, much to the injustice done unto the santan. Daon pandan (pandanus leaves) are also added in the cooking of the gula melaka syrup, an old practice which perpetuates the preparatory work of many kuehs and chuchi mulots which calls for the the treacle-like concoction to be made. Some folks have also conveniently omitted this in their renditions, perhaps the flavours and aroma imparted by the leaves so commonly used in traditional Malay and Peranakan cooking are undiscerning to their tongues. 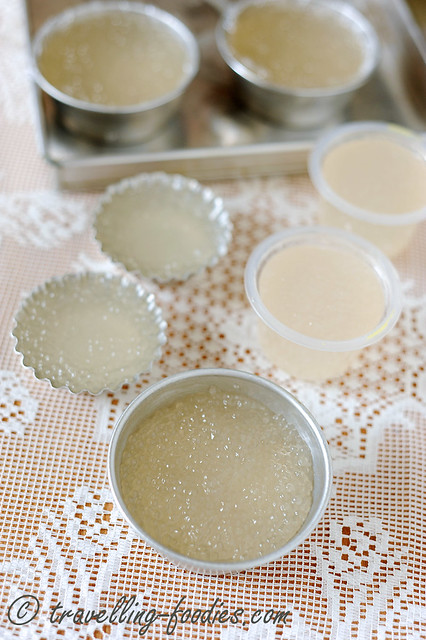 The cooked sago pearls can be made to set in a large jelly mould and cut up before serving but most would prefer to have individual servings made for convenience. An assortment of moulds can be used from small pie or tart moulds to recycling the plasic containers of custard or jelly moulds. 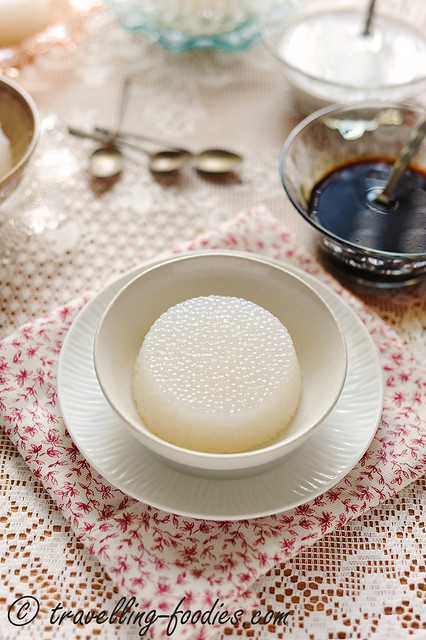 A few hours is all that is needed for the components to cool and set but I prefer to leave them overnight in the chiller, ready to be enjoyed the next day. Such a simple dessert to make but makes one’s meal and possibly one’s life complete. It certainly did for me! 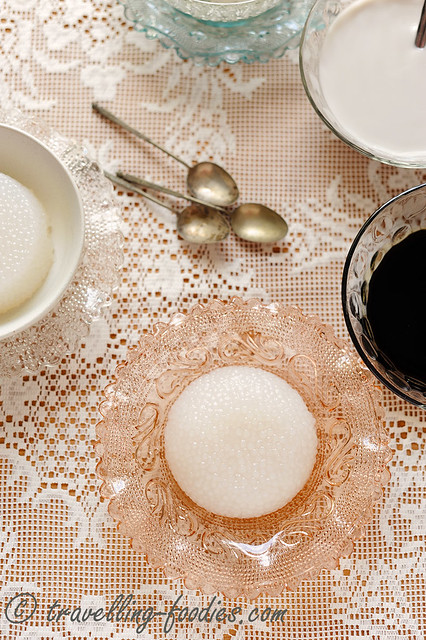 Method
Place chopped or shaved gula melaka, pandan leaves, water into a saucepan. Heat to melt all the gula melaka. Turn down the flame and leave to simmer covered for 5-10 mins. Remove pandan leaves and pour the gula melaka syrup into a small bowl. Cool to room temperature before storing in the fridge.
Heat up coconut cream with salt until small bubbles begin to form around the perimeter of the saucepan. DO NOT ALLOW THE COCONUT CREAM TO COME TO A BOIL. Pour into a small bowl, cool to room temperature before storing in the fridge.
Finally to cook the sago pearls, pour enough water to fill up at least half of a pot and bring to a rolling boil. Pour the sago pearls into the boiling water and cook at medium high flame until the initially opaque sago pearls turn almost transparent.
Carefully pour the mixture over a fine-wired sieve and drain away excess water.
Ladle the cooked sago pearls while they are still hot into the moulds. Wet the interior of the moulds slightly first before pouring the cooked sago pearl in. This helps in the unmoulding process later. Use the back of a wet spoon to press down slightly to ensure that the entire cavity of the mould is filled up.
Leave to cool down slightly before storing in the fridge for at least 2-3 hours, preferably overnight.
To serve, use a toothpick or paring knife to run around the perimeter of the moulds and dislodge the compacted sago pearls into a serving bowl. Drizzle with 1-2 generous tablespoons of coconut cream, followed by a generous tablespoon of gula melaka syrup.
Serve immediately. 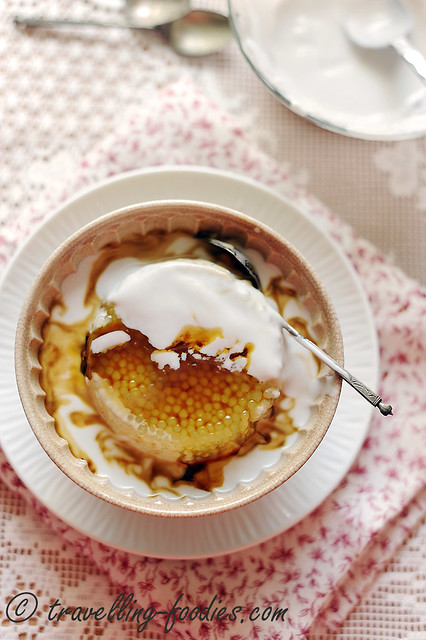 A few quicknotes to address some issues brought up by friends on cooking sago. Well, there are many people who say many different things. While some folks advocate rinsing the sago pearl in water before cooking them, I don’t do that. as this often leads to attrition with the sago starch crumbling in the water.

The water MUST be in a rolling boil at the point the sago pearls are introduced into the water. And there must be sufficient water in the pot to create convection currents for the pearls to circulate very freely within the boiling water to ensure even cooking.

Cook the sago pearls to the point when only a teeny weeny bit of white is left in the centre. Turn off the flame at this point and allow the residual heat to finish the job. I don’t cook the pearls until they become totally transparent before turning off the flame. By the time the pearls are drained, they would probably have overcooked and become mushy, with the cooking water becoming a gooey slurry.

Finally, although i do drain the sago pearl amply before filling them into the moulds, I do not rinse off the excess starch adhering to the pearls after cooking either. The starch coating actually helps to gel the pearls together for the dessert to stay in shape during serving. With the starch gone and temperature dropping upon rinsing, the pearls may not hold their shape properly when the dessert is being unmoulded. Hope these help!