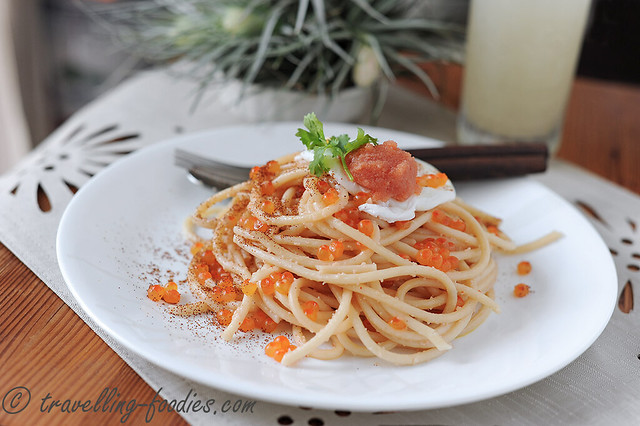 My old 16 year-old knacker decides to call it quits and stopped working one day two weeks back. A literally kick in the butt for me because I’d juststocked up my freezer with two boxes of gigantic Hokkaido scallops and some presoaked sea cucumber just a few days prior. Not forgetting that precious punnet of fresh redcurrants I’d just bought for a baking project. The writings were on the wall but I’d just ignored it，blinded by confidence which I do even know where it comes from, that the fridge would pull it through despite being overloaded and overworked all these years now. I ended up throwing out a lot of stuff from the freezer, from frozen fish bones and prawn shells which I’d “collected” to make that fish broth, and prawn stock for some dishes I had in mind, to IQF fruits which I’d stocked like raspberries and figs, not to mention a load of purees, frozen peels, zest and juices for “the day” when I cannot find them in the supermarkets should I need them for something. But who am I kidding right? With Driscolls invading the chiller shelves since a couple of years back, raspberries are available all year round now at the local supermarkets! Those which were not thrown out, I’d to cook ’em in a frenzy. I’d to cook all the oxtail, brisket, beef shin, tripe and tendon I had into one large pot of 柱侯萝卜焖牛腩 braised beef and daikon, which I had to eat over the next 2-3 days and fortunately, had a friend and her hubby to share it with. It was delicious I was told. Well, with the sheer amount of beef and ingredients that went into it, it had better be! I also told my friends, that the day when my fridge suffered the great meltdown would be laid down in history as a grand day to remember when I’d cooked and ate two boxes of frozen scallops. We had one for dinner with a vegetable stir fry. And I had the other box with instant noodles for supper. Insanity I tell you. That same afternoon, into the tummy also went 4 large Californian white peaches, and a box of Jean Paul Hevin marron glaces which I’d carefully lugged back from Taiwan, hoping to use them for the Mont Blanc I’d been wanting to make. But that “wanting” has been shelved for 2 years now and still, the marron glaces sat quietly in the top counter of the freezer waiting to be used, until that fateful day to find themselves being gobbled down in an utmost unglamorous manner. They were JPH marron glaces after all, for Christ’s sake! What was I thinking… 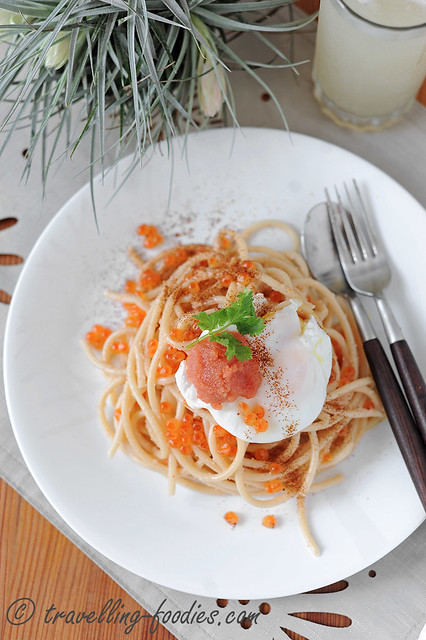 My dad and I went to look for a fridge that same evening. Yes the day we ate two boxes of frozen scallops! The one we’d wanted wasn’t in stock so we had to settle for something else instead. Orders were placed and payment was made, waiting for the fridge to be delivered in a couple of days’ time. Alas, on the next day, after I’d cleaned out the guts of the old knacker, it decides to resurrect itself and sprang to life again! Hallelujah! Before long, it was spewing cold air once more, misty cool wafts cascading down the freezer whenever I open it. Now the joke is on me! The order for the new fridge was cancelled. Let’s just hope that the old fella would be kind and not die on me again. But firstly, I’d be kind to him by not stuffing him crazy anymore. Amidst all that drama, I’m glad that it ended on a positive note. Despite it working again, we spent the next few days clearing out more stuff from the fridge. Stuff which we’d not eaten in quite a while, stuff which we don’t think we would be eating for quite a while and stuff that shouldn’t be in the fridge, or need not be in the fridge in the first place. I told myself to be more discerning with my grocery shopping from now on. Hopefully with more exercised discretion, the fridge would last me for a couple more years to come…keeping my fingers and toes crossed. 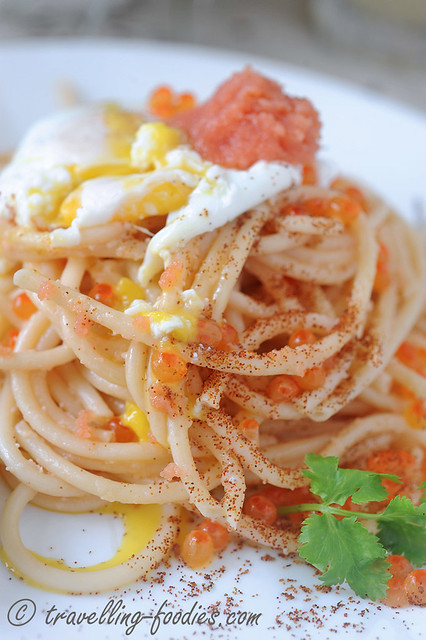 I’d cooked this Mentaiko, Ikura, Shrimp Roe and Poached Egg Pasta about a month back actually. A while before the fridge decided to go “kapoot” on me . And thankfully I did, because the frozen mentaiko and ikura would not have survived the ordeal of the meltdown. I was lucky to be able to expend the stocks for these what I deem as being “precious commodities” before I went through all that drama mama. Sounded quite an oxymoron I know but what would life be like without mentaiko and ikura, I cannot imagine. This pasta is very easy to make, needing only about 15 minutes to whip up a quick but not-so-light lunch. The name is quite a mouthful yes I know, but trust me, so are the flavours. It is packed with so much umami goodness from the sea that it is purely “orgasmica gastronomica“! Mentaiko and ikura alone are enough to send any food lover to seafood heaven. What hits first is the aroma, from the roasted shrimp roe  虾籽 I’d gotten from Hong Kong, together with the wafts of the sea carried by the mentaiko and ikura. Imagine the juxtaposition of the larger ikura which pops in the mouth with every yielding of pressure between the tongue and teeth, exploding in the mouth sending an avalanche of flavours in all directions, while the small and beady mentaiko coax the tongue with their amazing palate sensation. The slight hint of spiciness from the ichimi used in the seasoning of the mentaiko raises the facades of the multitudinous dimensions the dish provides and as if the mayonnaise is not enough, I’d doubled up the creaminess for good measure with the runny yolk and just jellified whites from the poached egg, just to be doubly sure. To top it all up, a generous dusting of roasted shrimp roe escalates the amount of anticipated excitement from just preparing the dish and punctuates it perfectly in the end. The complexity of the components and hence the flavours may seem a tad too busy for some, but trust me, they are all relevant and coherent as a whole, maintaining some kind of gastronomic homeostasis that balances the dish beautifully. And yes… all accomplished within 15 minutes.

First, get the pasta cooking, which usually takes 12-14 min depending on variety used.
While the pasta is cooking, prepare the seasoning sauce.
Mix all the seasoning ingredients in a mixing bowl and add 1-2 tsp of the boiling pasta cooking water to dissolve the sugar. Set aside to cool down slightly.
Slit open the mentaiko roe sac lengthwise and carefully scrape off the roe.
Add 1/3 of the mentaiko roe into the seasoning mixture and mix thoroughly.
When the pasta is cooked al dente, drain the pasta quickly but thoroughly with a colander or sieve.
Add pasta into the seasoning mixing bowl and toss to coat every bit of pasta with the sauce. Cover the bowl with a plate to keep warm.
Add 1 tbsp of white vinegar the same pot of pasta cooking water and bring to a boil again before lowering flame to gentle simmer.
Carefully crack an egg into the pot and swirl it around gently with a chopstick or fork until the egg is just poached.
Plate a portion of mentaiko pasta and place the poached egg on top of it.
Garnish with a tbsp of ikura, a dollop of mentaiko, a dusting of shrimp roe and finally the poached egg.
Repeat for second portion of pasta and serve immediately.