Like bak chang, many other street food vendors too make use of these baskets with bamboo poles to peddle their ware. Another signature “small eat” from Tainan comes in the form of small bowls of fresh noodles in piping hot soup, embellished with an assortment of condiments. The noodles were also initially peddled around the streets of Tainan with makeshift stoves and baskets carrying crockery straddled across a 擔仔 bamboo pole, and that is how its name 擔仔麵 Dan Zai Noodles came about… 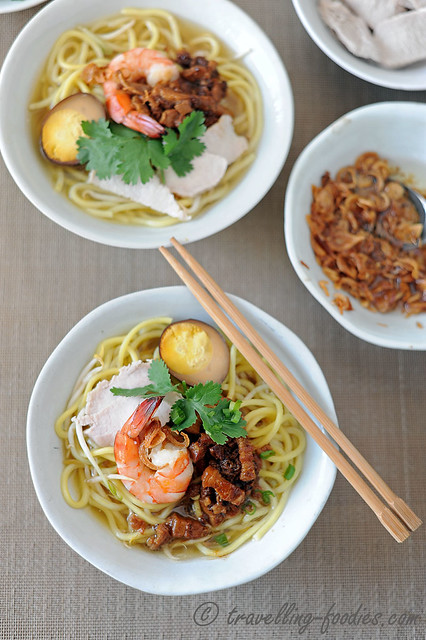 In Tainan, many decade-old shops still exist, whose names are synonymously associated with the food they serve. When one wants to eat deep fried shrimp rolls, one would think of 周氏虾卷, while if one should crave for a bowl of savory porridge, 阿堂咸粥 comes immediately to mind. Likewise, the name 度小月 would draw us to their signature 擔仔麵, which they have been selling since 1895 during the Kwanghsu reign of the Qing Dynasty. Now that is some 120 years ago… talk about a long withstanding culinary history. 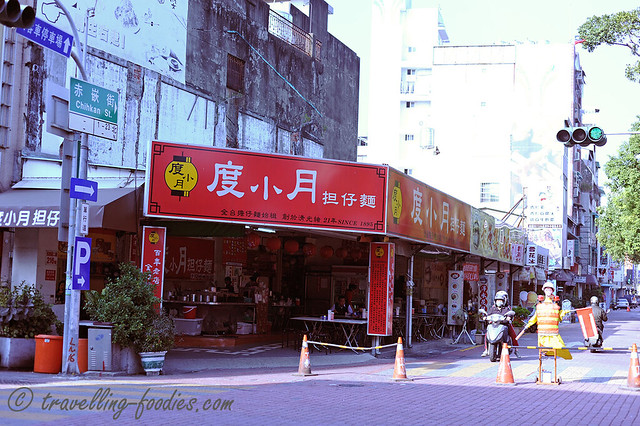 Like many street hawkers, Du Xiao Yue started as a small makeshift stall along the streets of Tainan during Japanese occupied Taiwan. The simplicity of their flavours drew crowds from near and far, and soon they have made enough to start their own shop. Now, Du Xiao Yue has become an international name, synonymous to Ding Tai Feng as icons of Taiwan’s culinary culture. The concept of Dan Zai Noodles is quickly replicated by others and before long, this “small eat” spread throughout Taiwan. 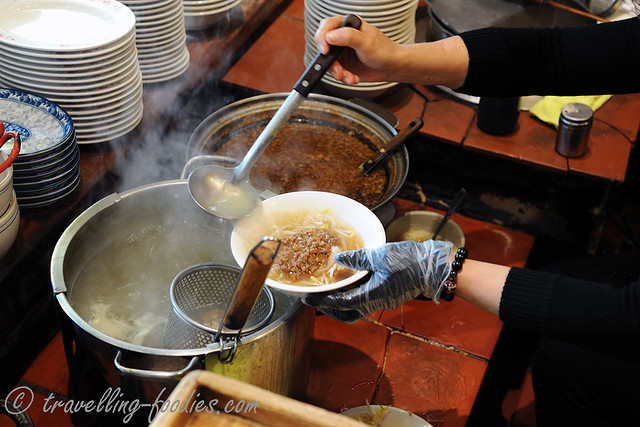 Be it at Du Xiao Yue or other spinoffs selling Dan Zai Noodles, a sight still remains familiar, that is a low stove for blanching the oil noodles and condiments, as well as a large pot of braised minced meat. This was supposedly what it had originally looked like, a tradition maintained until today. 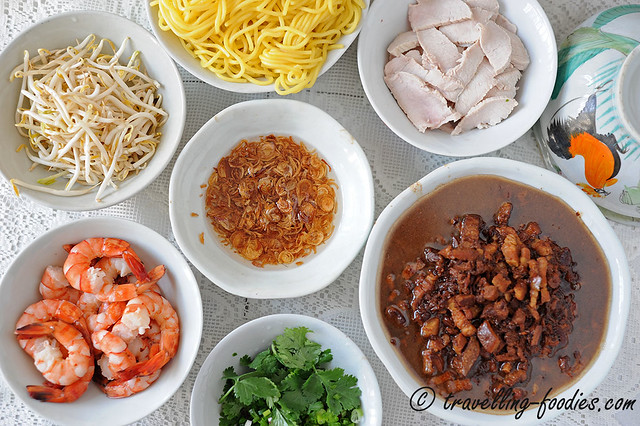 The ingredients for a bowl of Dan Zai Noodles, a rather simple fare actually. There are several important components to this dish, one of which is the soup broth  traditionally made from a prawn stock base whose flavours are extracted from a large amount of prawn shell used. When this dish made its way to the north, folks selling Dan Zai Noodles in Taipei used a pork broth base instead, concocted from pork ribs and pig bone. The flavours are dramatically different of course. For  small scale consumption at home, a mixture of prawn and pork stock is recommended. A good melange of flavours without losing economy of scale. Otherwise, it is quite easily replicated at home, making it a good weekend lunch for all. 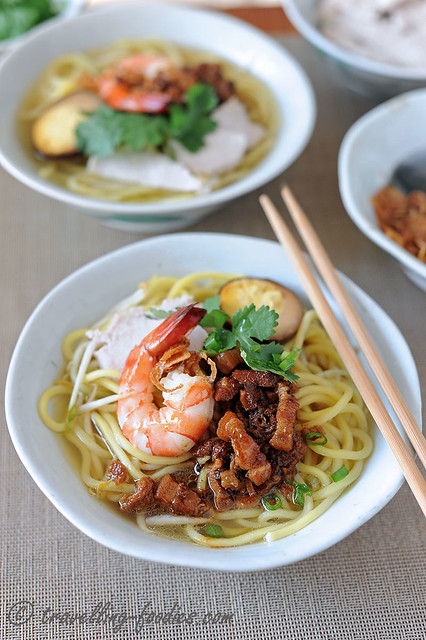 Method
Bring a pot of water (around 10-15 cups) to boil add rinsed prawns and blanch until they are just cooked. Remover prawns from the water and drain thoroughly.
Add piece of lean meat, pork ribs and/or large knuckle bones into the water and cook for 30 min or so.
When the prawns are cooled sufficiently to be peeled, remove head and shell and set the prawns aside. Return shells and heads back to the stock base and continue to cook until the 30 min is up.
Remove piece of lean meat from the pot and set aside to cool down. Slice into thin pieces when it is sufficiently cooled to be handled.
Season soup base with salt and boil for another 10 min before turning off flame to steep for 20 min.
Drain to remove pork bones and prawn shells.

To assemble, first blanch a portion of yellow noodles with a handful of bean sprouts in boiling water quickly, appro. 15 seconds or so.
Drain noodles thoroughly to remove excess blanching water and place blanched noodles and beansprouts in a serving bowl. Place a generous spoonful of braised minced meat over the noodles and proceed to ladle some soup around the noodles （not directly over the braised minced pork)
Garnish with blanched prawns, lean pork slices, coriander leaves, halves of braised hardboiled eggs, chopped spring onions, minced garlic, deep fried shallot crisps and finally a light drizzling of black vinegar and dash of white ground pepper before serving.