上海生煎包 Shanghai Sheng Jian Bao Shanghainese Pan Fried Steamed Buns is a local snack that originated from Shanghai in the 1920s. The novel way of pan frying the mildly proofed buns before steaming them directly in the same flat pan over a stove became extremely popular as a street food and remains so in Shanghai today, alongside 小笼汤包 Xiao Long Steamed Dumplings and other delectables in Shanghainese cuisine also known as 沪菜 or 本帮菜. Cuisines from other places in China like the neighbouring Zhejiang (浙菜), stretching northwards to Shandong (鲁菜), or southwards to Guangdong and Hong Kong （粤菜） also have very similar versions, where these buns may also also known as 水煎包 Shui Jian Bao. The culture of eating these Pan Fried Steamed Buns spread to Taiwan during the mass exodus of Chiang Kai Shek’s KMT army from China to the island state in the late 1940s. A large portion of Chiang’s troops are from the Yangtze region, especially those from his hometown, 奉化 Fenghua in the Zhejiang Province 浙江省. These soldiers, together with those from Shandong, Szechuan and even Yunnan, forms up a large part of Taiwan’s migration population in the last century to become what the locals grew to call 外省人 Wai Sheng Ren. The influx of these soldiers and their families from Mainland China greatly diversified the social habits and culinary cultures in Taiwan. Many of these dishes brought along and introduced by these migrants became so deeply rooted, that they are now enjoyed by the tourists, as well as the Taiwanese, be it the locals 本省人 Ben Sheng Ren, or the 外省人 alike. 上海生煎包/水煎包 is one of those popular snacks. 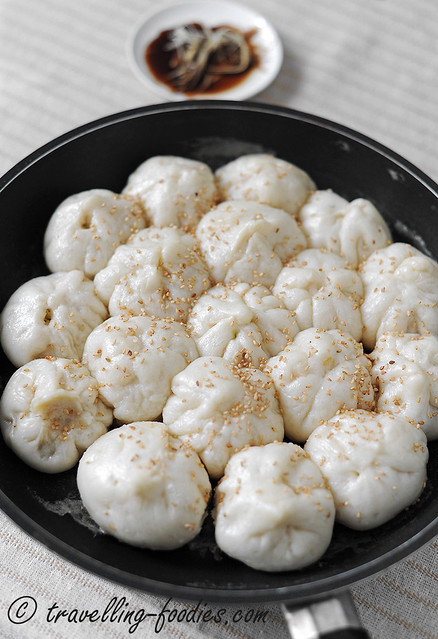 The Chinese name of these Shanghainese Pan Fried Steamed Buns 生煎包 literally means that the buns are first pan-fried （煎) when they are still raw (生）. Its other name 水煎包 sheds some light to how the buns are prepared, with a melange of culinary techniques from pan frying to direct steaming them with a splosh of water (水）in the same pan as they were pan fried. This is vastly different from the traditional notion of steaming dishes over water (隔水蒸) as one would have done for most steamed dishes. The piping hot soft and fluffy buns with a crisp bottom are a joy to savour, especially with a simple dipping sauce made with vinegar, light soya sauce and a drizzling of chili oil. 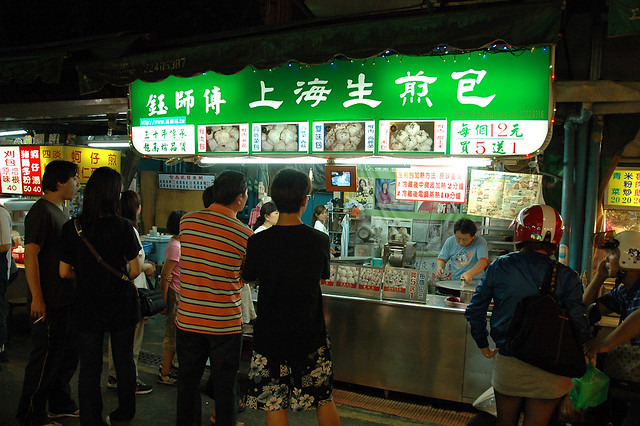 This dish is so popular in Taiwan, you can find it on the menu of practically any Chinese restaurant that specialises in Shanghainese or Yangtze cuisine. Needless to say, it can also be found in practically all major nightmarkets, each having their own signature stalls. Popular ones would be 原上海生煎包 at Shilin Night Market 士林夜市 located near the old Yang Ming Cinema, or 許記生煎包 at Shi Da Night Market 师大夜市. But our personal favorite is 钰师傅上海生煎包 from 南机场夜市 Nan Ji Chang Night Market, a lesser known night market located within a residential area in Taipei. The chef-cum-stall owner, Mr Yu has been making these pan fried steamed buns for over 30 years since his younger days and judging by the number of people waiting for their steamed buns, I’m sure they are good! You can read more about our take on Mr Yu’s pan-fried steamed buns and other delectables of Nan Ji Cheng Night Market during one of our trips to Taipei here. 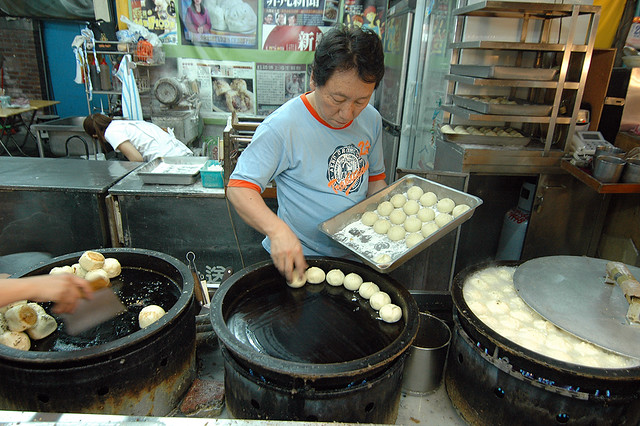 Mr Yu manages 3 large flat pans at his stall, each with more than 50 buns in them at any time and yet, he could barely make them fast enough for the crowd who visit his stall continuously. 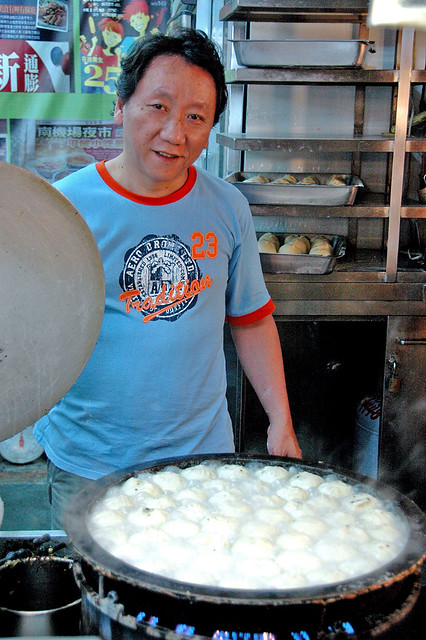 Learnt a few tricks on making 生煎包 from this master. One of the advice I still remember is to be generous with the water in the steaming stage or they will never steam and fluff up properly. Contrary to what I’d seen in some other places, he really adds more than the “usual”. He also partially uncovers the pan at any time for the steam to escape quickly so that the buns do not become soggy. It is all a balance of time amount of water and flame conrol, which comes with experience. 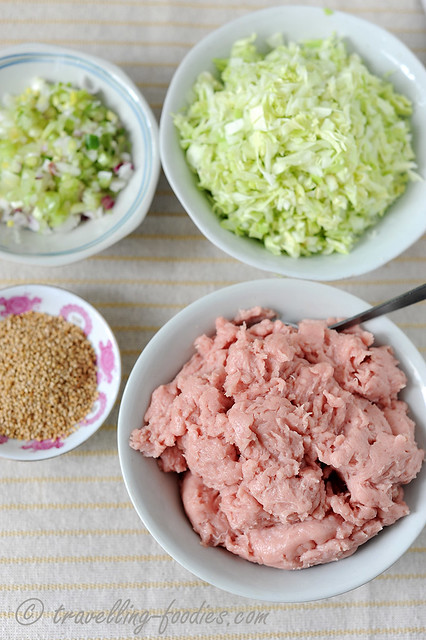 The ingredients for making 上海生煎包 is actually very simple. Minced pork, cabbage, spring onions, and sometimes chives. At one glance, one would notice that the meat looks very pinkish and considerably smooth in texture compared to what we buy outside, another trick from Mr Yu. Traditionally, water is added to the minced meat to make it softer and more bouncy. This is called 打水. The balls of minced meat then has to be “thrown” repeatedly against a large mixing bowl to achieve the right texture for it. This is called 甩筋. This is a common technique used many dishes which incorporate minced meat , from 小笼汤包 to 红烧狮子头. Given the sheer amounts of meat one has to handle everyday, the throwing technique would not be logistically feasible, or one would risk getting a tennis elbow after sometime. Instead, the ground meat is blitz in a food processor for a brief period of time, together with the seasoning required to achieve the desired texture. All it takes is 10 seconds and one would immediately sense the difference in texture. You’ll have to try it to believe it. 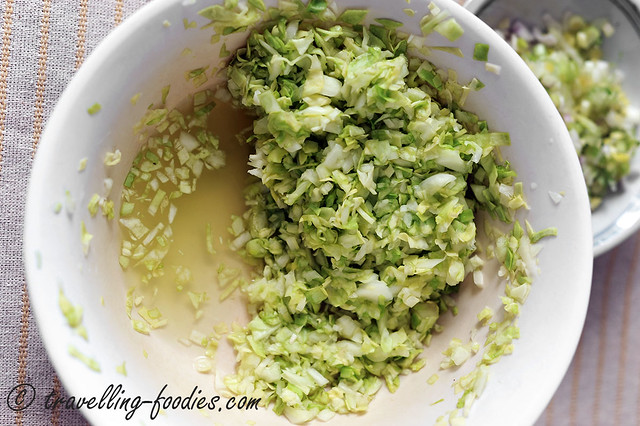 Another important step in making the filling is to leach the liquids from the chopped cabbage through exosmosis, a process known as 脱水杀青 in culinary terms. This is simply done by “massaging” the chopped cabbage with a pinch of salt and leave it to sit in a mixing bowl for 20 min or so . This is done to prevent the cabbage from losing too much water into the filling after it has been wrapped, which can cause the bun to turn soggy. 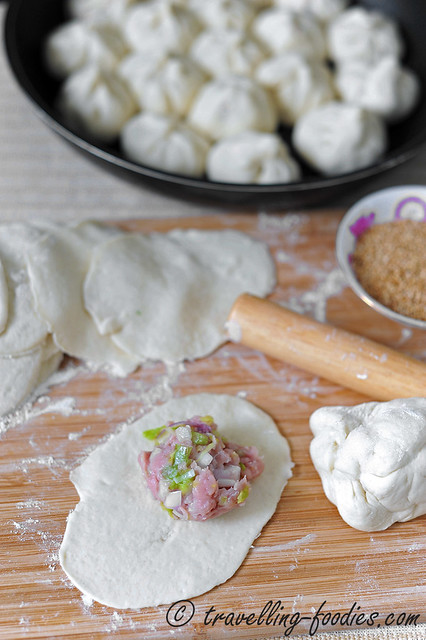 The skin is made by direct method with just flour, yeast, water and some cooking oil. Everything is just mixed to form a nice and smooth dough, and no pre-proofing is required.

The wrapped buns are arranged directly in a pan where they will be left to proof briefly for 10-15 min It is easier to use a non-stick pan for those like us who wish to attempt to make the snack at home. 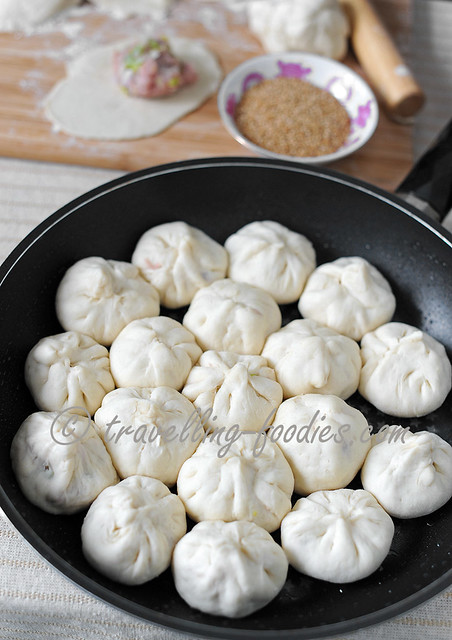 Method
First prepare the cabbage by chopping into very small pieces. Add a pinch of salt and give the cabbage a good rub in a bowl. Leave and set aside for 15 min. If possible, give the chopped cabbage a toss with a fork every 5 minutes or so.
Chop spring onion and set aside.
Put minced pork together with all the other ingredients, except spring onion in a food processor and mix well at high speed for 10-15 seconds.
Transfer meat to a bowl with a cling film and refrigerate to marinate for later use.
Squeeze out as much water from the chopped cabbage and drain in a sieve. Mix with chopped spring onions and set aside for later use.
To prepare dough skin, mix all the ingredients in a large mixing bowl until a smooth dough is formed.
Cut the dough into halves and then quarters. Cut each quarter into 4 or 5 equally sized pieces. You may wish to weigh out the dough pieces if necessary.
Rest the dough pieces for 10 min covered with a piece of damp cloth.
Meanwhile, take the meat filling ingredients out from the fridge and stir in chopped cabbage and spring onion until just well mixed.
On a working surface lightly dusted with low gluten flour, roll out each dough piece into flat circular or oval discs. The rim should be thinner than the centre.
Place a generous spoonful of filling in the middle of each dough piece and proceed to plait the edges in a circular fashion.
Place the bun in the middle of a greased non-stick flat pan.
Repeat the process to make more buns and arrange them in the pan outwards. When the pan is filled almost to the perimeter. Leave a small allowance between each bun for expansion during proofing and steaming.
Leave the buns to proof briefly in the pan, covered with lid for 10-15 min.
Turn on flame to medium low and pan fry the buns covered for about 4-5 min until the base turns a beautiful golden brown. If need be, shift the pan around so that the perimeter of the pan gets uniformly heated.
Open the lid and pour the flour and water concoction onto the base of the pan, which would be sizzling and bubbling like madness by now. Cover quickly and let the buns steam for about 10-15 min, or until some “cracking noise” is produced from the wok, indicating that all the water has totally evaporated.Partially open the lid to allow some steam to escape first before opening completely. This prevents the fluffy buns from deflating from a temperature shock and helps to keep the surface soft and smooth. Sprinkle generous with toasted sesame seeds and serve immediately with the dipping sauce. 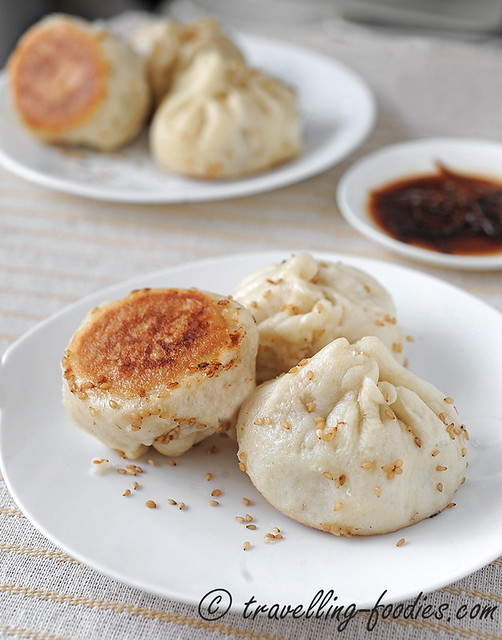