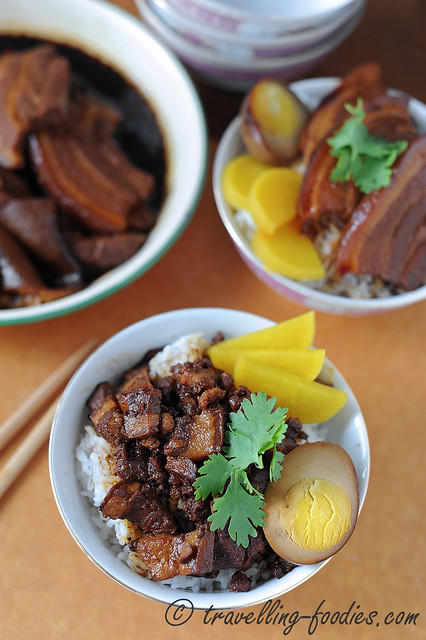 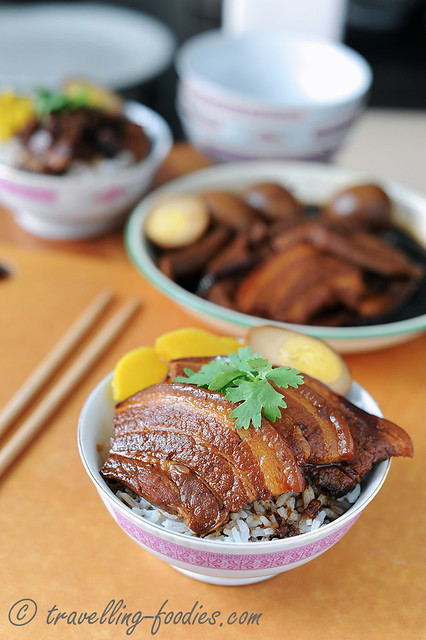 滷肉飯 has its roots in Min cuisine 闽菜, from the southeastern coastal region of Fujian in China. Traditionally, the dish is served with whole thick slabs of braised pork belly meat over piping hot rice, giving rise to its other name 焢肉飯. That is how many shops in southern Taiwan sells it, following a more-than-a-century old practice which has been passed down through the generations. Over time, some shops have evolved to cutting the large chunks of meat into smaller pieces, adding convenience and ease to its consumption. This has the “labour force”, which includes the farmers and blue-collared construction or factory workers’ interests at heart, as a bowl of lor bak png was what many of these folks had for lunch most of the time. Pragmatically, cutting the meat into smaller morsels also shortens the cooking time, allowing the flavours from the braising sauce to seep into the meat more quickly. 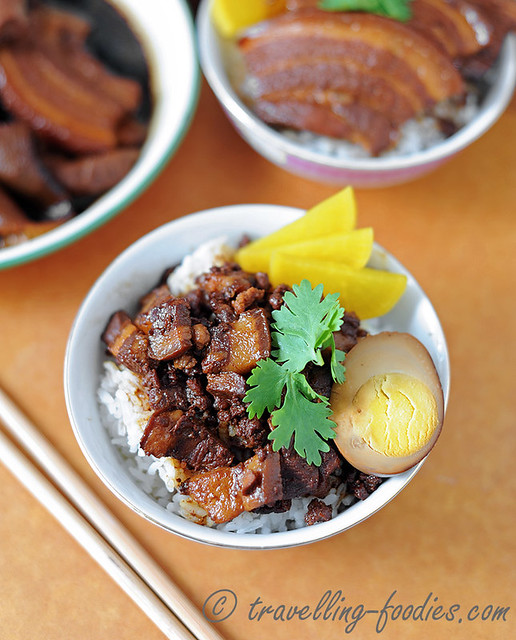 I’d noticed some blogs who featured lor bak png using minced meat or worse still, lean meat in attempt to create a “healthier version” of this dish. I frown at these renditions as they are lor bak png no more. Forever will be gone, the natural goodness which rendered from the pork fat into the braising sauce. The texture and palate sensation would also be severely contorted and misconstrued. If it is the health-related effects from consuming too much animal fat that is bothering you, then eat in moderation, when one feels the need to reminiscent those flavours from the yesteryears. In an attempt to stay align with “modernity” sometimes, making modifications to old culinary habits seem acceptable and sometimes necessary. But that is only when the old means are no longer possible or difficult to achieve, i.e. the use of firewood or charcoal fire in cooking. But when options to revive and relive the taste and flavours of the old days are still available, it would be deemed as being sacrilegious to alter anything. In short, do not advocate and preach the “wrong” by using lean and/or minced meat for lor bak png. If one has low or no tolerance for lard or fat, then simply don’t eat lor bak png  at all. 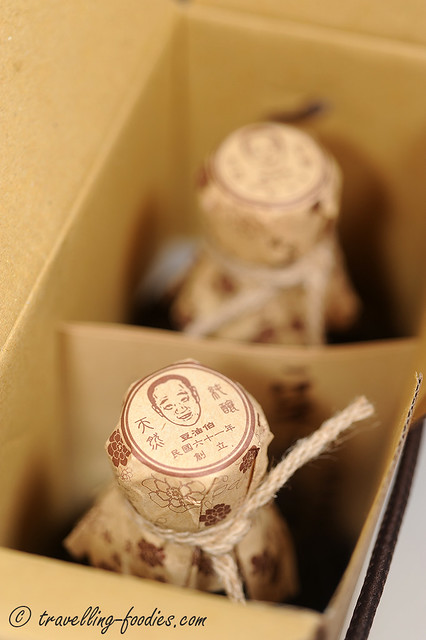 A pot of good braised meat can only be achievable if the soya sauce used is good. I like the products from 豆油伯 in Taiwan. The quality is really good as it is not just salty 死咸 like some other brands but also aromatic 醇 and has a sweet 回甘 end note. Yes it is really pricey compared to some other brands, but at least we know that it is using real soya beans in the making of their premium products.

Nowadays, a lot of recipes also advocate the use of starch as a thickening agent for that slightly gooey effect for the sauce. This is NOT how lor bak png is made in the past. 勾芡 or what is known as “kan gee” 牵羹 in Min cuisine is indeed used in traditional cooking, but not in lor bak png. The braising sauce for lor bak png is thickened not with starch but by the natural collagen that leaches from the pig’s skin/rind layer. For that, extra pig’s skin is added to be braised together with the rest of the pork to achieve the desired effects. Not only that, the curled up and translucent layers of pig’s skin which had been braised to perfection is an absolute delight to savour. I love it and I’m sure most who had tried it would agree too! 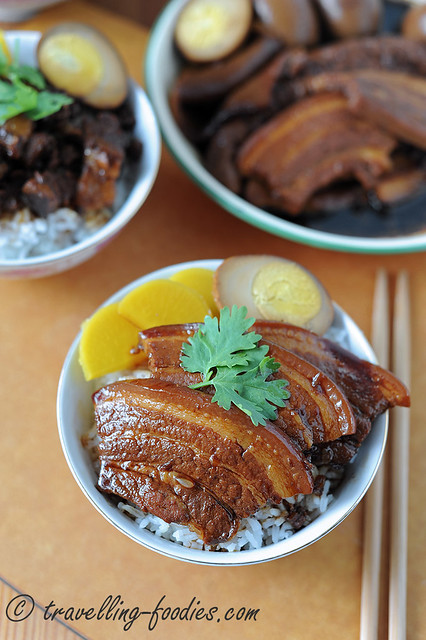 I usually braise a large pot at one go which would last over the next 2-3 days. It would normally include whole chunks of pork belly slabs which I can always use for 焢肉包 kong bak bao or 刈包 Gua Bao, as well as hard-boiled eggs and sometimes offals like large and small intestines as well. This particular batch is done with several Taiwanese dishes like 台南米糕 Tainan Glutinous Rice Bowl and 擔仔麵 Tainan Noodle Soup in mind. That is killing many birds with one stone, and also reflects the versatility of what one pot of braised pork can do! The other recipes would be rowed out soon, so keep a look out for them! 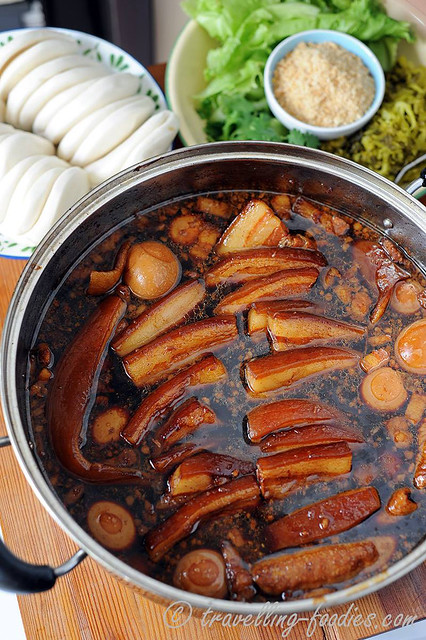 Method
Add cooking oil to a wok over medium-high heat followed by pork belly strips and stir-fry until they turn opaque and fully cooked and  the fat from the pork belly to render.
Add pig’s skin. It is obtainable cheaply and easily from the butcher’s, so do not skip this! Stir-fry with pork belly until the skin pieces firm up, shrink slightly and become slightly translucent.
Add dark soya sauce，star anise, five spice powder, cinnamon stick, ground pepper and stir fry with pork strips until evenly coated. DO NOT ADD ANY WATER AT THIS POINT. Continue to stir-fry for a min or so until the aroma of soya beans becomes apparent.
Add sufficient water to cover all the meat by an inch or so and bring to a boil. Add salt, rock sugar, hard boiled eggs, 2 tbsp of fried shallot crisp. Return to a boil before lowering to medium-low heat.
Simmer for 40 min with lid on.
After 40 min, check the flavours of the sauce and the texture of the meat. Adjust with more seasoning if necessary. Add the remaining tbsp of fried shallots.
Continue to simmer until soft for another 20-30 min or so.
While it can be served now, it is best to wait for a couple of hours, preferably overnight for the flavours to thoroughly steep and infuse into the meat and eggs.
Reheat first before serving. In Taiwan, the pot is constantly simmering under very low heat.
Serve  over piping hot steamed white rice garnished with slices of pickled daikon, halved braised hard boiled eggs (滷蛋) and coriander leaves.