“Summer” is here again and for a tropical country like Singapore who knows no seasons, it is usually marked by unbearable heat waves, and hopefully late afternoon thunderstorms which help to dispel the heat for more tolerable nights, only to wake up to repeat this “daily cycle” all over again. While I loathe the heat, I love “summer” for several reasons and one of which is the coming of seasonal fruits we get only during this time of the year. Stone fruits take centre stage but not forgetting our lovely tropical mangoes and soon-to-come durians as well. One of my favorites is 日向夏柑 Hyuganatsu, a citrus from Miyazaki, Japan much loved for its refreshing sweet and sourish flavour combination. Amongst all the varieties of Japanese citrus available throughout the year from an assortment of different cultivars of Mikan to Yuzu, Kiyomi, Dekopon, Satsuma etc… Hyuganatsu is one which is particularly enjoyed to “welcome” the hot season, as the name of this citrus 夏 “natsu” literally means “summer” in Japanese. The Japanese love it and often present boxes of hyuganatsu as omiyage or gifts to friends, family and business associates whenever the fruits are in season. Though good to be eaten on its own, Hyuganatsu can also be used to make a variety of desserts, including the popular 日向夏柑の寒天ゼリー Hyuganatsu Kanten Jelly, which is so easy to make but incredibly enjoyable. 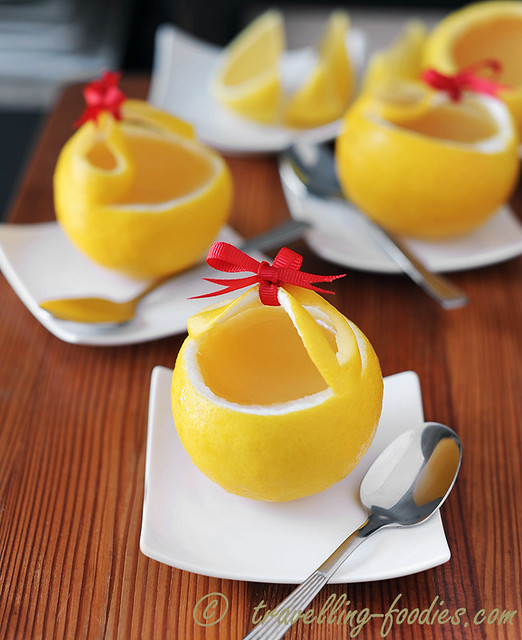 The origins of hyuganatsu is said to be rather “mysterious” as it purportedly appeared out of nowhere as a sapling almost 200 years ago in Miyazaki back in 1820. Though it has been scientifically described as a taxonomically distinct species, many have thought it to be a natural hybrid between a yuzu and a pomelo. The former lends the hyuganatsu its aroma and acridity which this fruit is most known for, while the thick pith and shape makes it look like a downsized pomelo. Speaking of the pith, it is worth noting that much of it is eaten and enjoyed together with the pulp flesh as the former does not have the astringent and somewhat bitter aftertaste which many other citrus varieties have.

Traditionally, hyuganatsu is also used in 和菓子 wagashi making, where is it adopted as a vessel for a 羊羹 yokan speciality from Miyazaki called 日向のかおり “hyuga-no-kaori” which literally means “Fragrance of Hyuga” where Hyuga was actually the old name for Miyazaki. But making it is a painstaking process and I’m not in for that at the moment. Instead, I’d opt for a simpler but no less pleasurable way of enjoying this season’s hyuganatsu, i.e. to make them into kanten jelly and I’m quite sure those who tried it would love it too 🙂 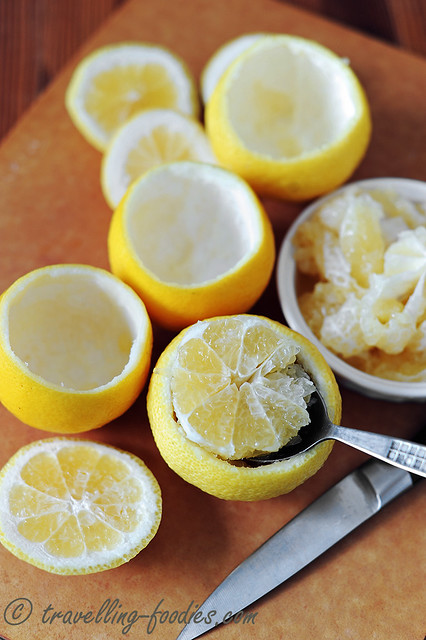 Method
Cut off 1/8 of the top of each hyuganatsu fruit. Set aside the cut peel pieces as “lids” for later use.
Using a paring knife, carefully make a cylindrical cut around the pulp of each fruit, being careful not to cut through the peel.
Using a spoon, gorge the pulp of each fruit carefully, leaving the pith largely intact.
Set aside the emptied hyuganatsu peel “cups” for later use.
Squeeze out as much juice as possible from the gorged out pulp. It should yield around 300-400g of hyuganatsu juice.
Transfer the juice into a mixing bowl and top up with water until the total mass is 500g.
Add sugar into the diluted juice and stir thoroughly to dissolve as much of the sugar as possible.
Sprinkle the kanten or agar powder slowly into the juice with constant stirring until well incorporated. Check that there are not lumps of kanten or agar powder present. Weigh out the agar powder carefully as adding too much would cause the jelly to become rock hard while adding too little may make it difficult for it to set properly.
Strain the mixture over a sieve into a saucepan.
Heat the mixture over medium low heat until just below the boiling point. Stop when bubbles form around the perimeter of the pot without the mixture coming to a rolling boil yet.
Carefully ladle the kanten jelly mixture into each cup until around 3/4 filled.
Carefully skim off any foam on the surface and leave the kanten jelly cups to cool to room temperature before covering them with the peel “lids” and place into the refrigerator for at least 3 hours for the jelly to chill and set properly.
When ready to serve, cut into wedges and serve cold. 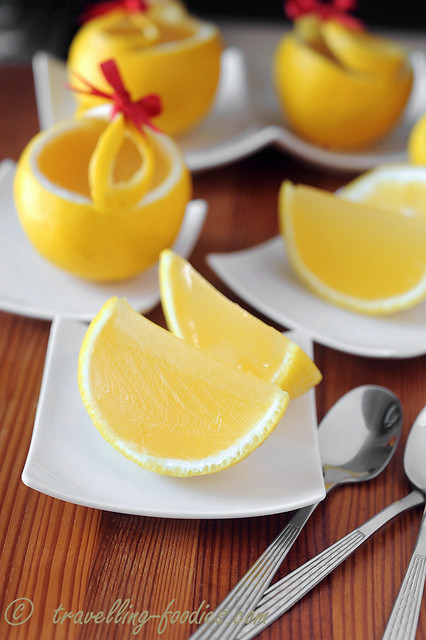 NOTE: other citrus varieties can also be used but do ensure that the peel and pith layer is thick enough for the peel “cups” to hold their shapes. Otherwise，the jelly can also be set in moulds. For a more sugary concoction, the mixture can also be topped up with the juice of sweeter orange varieties like navel oranges in place of water. Another lovely Japanese citrus which is highly suited for making this dessert is Haruka はるか

This entry was posted on May 8, 2014 by Alan (travellingfoodies). It was filed under Food, Simple Eats and was tagged with agar agar, citrus, haruka, hyuganatsu, Hyuganatsu Kanten Jelly, japanese, jelly, kanten, sugar, wagashi, 日向夏柑の寒天ゼリー, 日向夏柑，はるか, 日本.