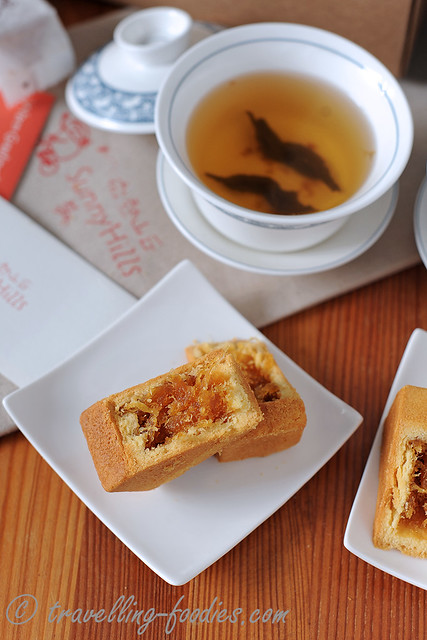 Pineapple tarts 凤梨酥 are very popular in this part of the world where I live. From the Indonesian “Nastar”  to the Peranakan “Kueh Tair“, pineapple tarts practically dominate the confectionery scene in Singapore and Malaysia especially during the Chinese New Year festive season. I make pineapple tarts as well, to entertain guests during their visits as well as gifts for friends and relatives. So pineapple tarts have in a way become symbolically analogous to Chinese New Year and part and parcel of our lives. Further up north  in a country where I call my second home, Taiwan is another place which is very famous for their 凤梨酥.  And when it comes to reputable 凤梨酥, one name has emerged rapidly over the last couple of years which these small finger-size confections are synonymously linked with, and that is 微熱山丘鳳梨酥 SunnyHills Pineapple Cakes. 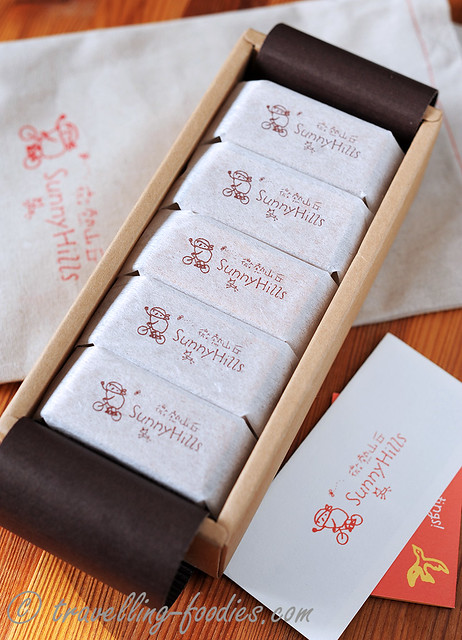 There are many famous shops in Taiwan that specialises in them, particularly in the northern area. Just like how 太陽餅 “Suncakes” is commonly associated with 台中 Taichung, many 鳳梨酥 speciality shops are found in Taipei. Worth mentioning is 李製餅家 in Taipei which we always patronise whenever we are in the city. They are related to 李鸪饼家 in 基隆 Keelung and 李儀餅店 in 九份 Jiufen. All are essentially grapes from the same vine which began during the Guangxu era of the late Qing dynasty. Having a history of more than 100 years in existence makes them one of the oldest if not the oldest surviving confectioneries that specialise in pineapple cakes. Over the last couple of years, some other brands took to the boards as well, like 佳德糕餅 ChiaTe located in the Songshan district in Taipei, as well as 港記酥皇店 Kong Kee which lies in the heart of the Ximending area. One voice heralds from the south in 南投 Nantou area, where the pineapples are natively grown and that is 微熱山丘 SunnyHills. With very effective marketing and sound product and image management strategies, SunnyHills soon became very well-known both locally and overseas. They now have outlets in China, Japan and Singapore. 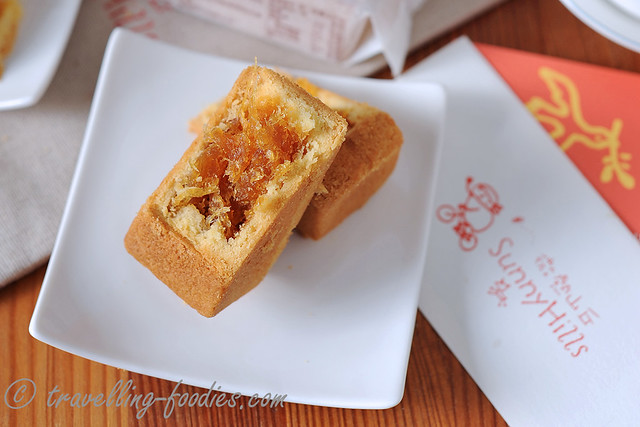 I got to know about SunnyHills through some pineapple cakes I’d received from Catherine of Camemberu around 2 years ago. The first thing that struck me then was their packaging. Unlike some of the older and more established labels, like those from the Lee family, SunnyHill’s version was noticeably more upscale and chic. The size of the pineapple cakes were also considerably bigger than the others we have tried before in Taiwan. Value for money? Well, at SGD 2.50 a pop which works out to be more than NT 60 a piece, they must surely count as one of the most expensive pineapple cakes we have ever eaten. But SunnyHills’s pineapple cake are unique on their own in many ways, which hopefully help to justify their relatively higher prices.

We “rediscovered” SunnyHill pineapple cakes one lazy Sunday afternoon about a month ago when we were finding a place to rest our feet as we wondered the streets in town. Their retail shop at Raffles Hotel offers a free sampling of a piece of their signature pineapple cakes accompanied by a cup of cold Oolong tea. Unlike many of shops in Taipei where the shop assistants are only all too eager to tout their products, one really gets a sense of relaxation and tranquility as one steps in. 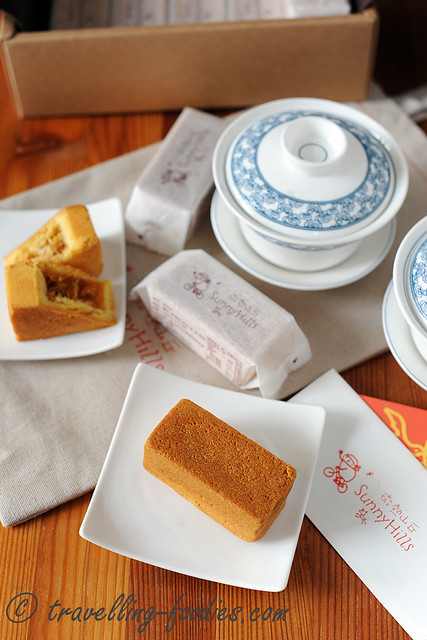 Unlike pineapple tarts we make in this region, the traditional Taiwanese pineapple cakes are not made from pineapple, but from winter-melon pulp! Flavourings and essence (read: chemicals) have been added to enhance the flavours. SunnyHills revert to the original intentions of pineapple cakes, that is to make them using only pineapples instead. And it is not any pineapple used, but those from the farms in Nantou area where Sunnyhills started from. They encouraged local farmers who were previously growing crops like ginger with lower economic yields to grow their 土鳳梨 local pineapple variety for them in exchange of greater profits and more importantly, greater value and sense of satisfaction in the plants they painstakingly nurtured. So what SunnyHills did was not only to start out a profiteering business, but also a community service which benefited not only themselves but helped the local farmers reap greater economic returns and to create greater social awareness of the need for local businesses to help each other in order to succeed. 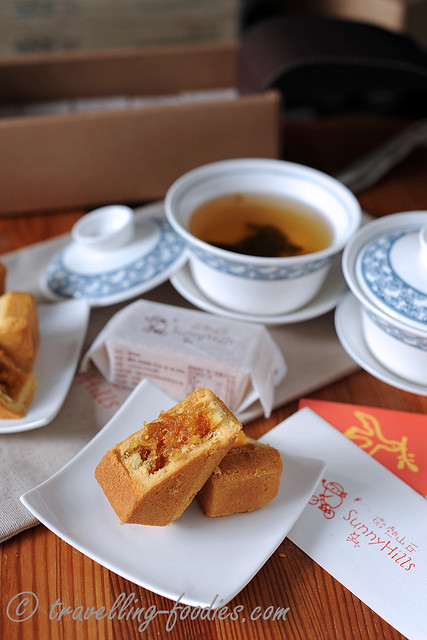 Shaped like little oblongish gold bricks, they make excellent 伴手禮 omiyage for anyone, be it close friends and relatives to business acquaintances. The pastry exudes a lovelybuttery fragrance that is assertive but not overpowering, boasting to have used Japanese milled flour and butter from New Zealand. There is even a more premier line which uses French Echire butter which we have yet to try. Having used Echire butter in my own baking, I can only imagine the pineapple cakes made with it to be even more aromatic and flavourful.  The filling is also not as sweet as many other Taiwanese pineapple cake varieties I have tried, so one can better discern the intermingling of the sweet and sourish fruity flavours from the pineapples in the filling. The local variety of pineapples used are really fibrous and hence had rather low economic value otherwise. At one point, most of Taiwanese pineapple farmers had abandoned growing them. SunnyHills saw this as a potential positive characteristic which they could imbue into their own pineapple cakes instead and encourage local farmers to grow them again by offering higher prices than what the farmers would get out of other varieties. The assurance of a good price from SunnyHills brings the assurance of good quality pineapples from the farmers in return. A win-win situation for everyone.  So a very fibrous filling has become a main attribute of SunnyHills pineapples. And I love it. In a world which is literally plagued with foodstuff laced with undesirable chemicals hidden under the food labels, a simple act of being able to taste and see real pineapple seems to satisfy one’s most basic yearning. In fact, we do see a switch in many Taiwanese pineapple cake makers in the last 2-3 years who have abandoned the old ways of using winter-melon pulp with artificial pineapple essence and flavourings and used real pineapples instead. It may not be the traditional way of making pineapple cakes, but it is surely a good change.

So naturally we bought a box of SunnyHills pineapple cakes home after sampling them at Raffles Hotel, accompanying a pot of freshly brewed 台湾高山乌龙茶 Taiwanese Oolong tea we brought back from Taiwan, to reprise the experience we had at SunnyHills for a couple more lazy afternoons to come.

For those who are interested to get to know more about SunnyHills and their pineapple cakes, please watch the feature on them in 台灣食堂 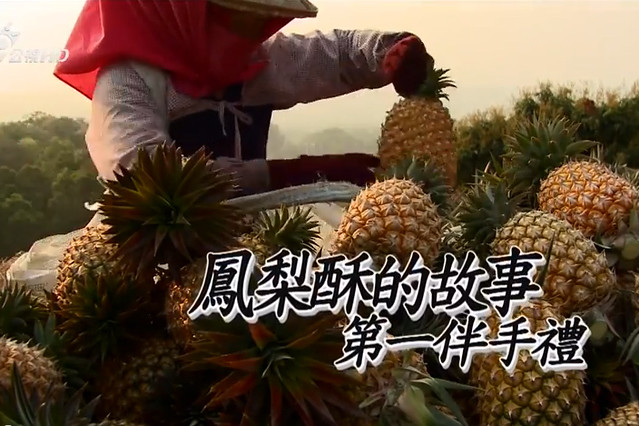 This entry was posted on April 1, 2014 by Alan (travellingfoodies). It was filed under Food and was tagged with Pineapple Cakes, Sunnyhill, Taiwan, 凤梨, 凤梨酥, 土凤梨, 微热山丘.