Most rendangs that I know of are cooked with beef or mutton. Chunks of meat which have been thoroughly cooked through and through from the prolonged simmering to make the meat so tender that it just flakes and crumbles with the slightest pressure from the fork, they are the kind of rendangs which I enjoy tremendously. Chicken rendang, well… I am a bit “iffy” about this. While I love chicken dishes generally, I feel that poultry doesn’t really do full justice to the rich and exuberant sauce concocted through the melange of spices used. I prefer them in curries. Same as rendangs you would say? Though subtle, there are still underlying differences between the two.

I was searching for a fish recipe for Perak when I came across one which uses stingray. Well done, since it is one of my favorite fish! But what I read next struck me as being really weird! Stingray in a rendang, surely that is unheard of! Then again, stingray does have a much more robust texture than other fish varieties so it might just work… Well, only one way to find out! 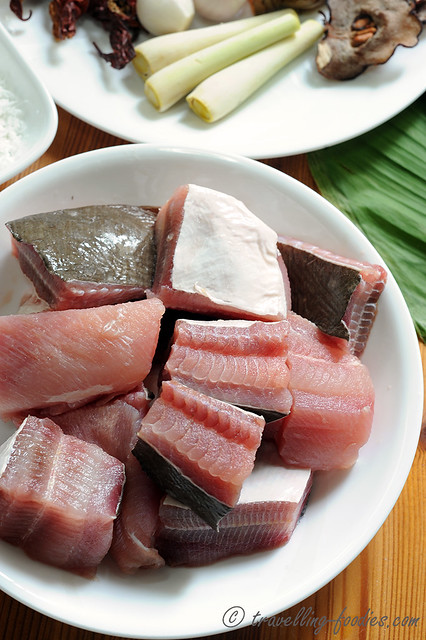 Reading further, one would be able to pick up the idiosyncrasies and nuances this Rendang Ikan Pari recipe has vis-a-vis a generic rendang recipe for beef or mutton. Apart from the choice of main ingredients, i.e. fish versus beef, there are some other interesting inclusions. The first thing that came to my attention was the use of kelapa parut, i,e, freshly grated coconut instead of kerisik where the grated coconut had been toasted till golden brown, unleashing all that aromatic nuttiness. This struck me as being analogous to meat-and-wine pairings, reds go with reds while whites with whites. Perhaps freshly grated coconut would work better with fish while kerisik would probably have overpowered it. This is purely speculative of course but kinda make sense yeah?

Then is the cooking process…in traditional rendangs, the meat is added with the spices near the beginning and the entire concoction being simmered together over a prolonged period of time. But in this recipe, the fish is added almost towards the end, after the gravy base has been boiled and reduced greatly. The author of the recipe specifically dictates this to be done so or the stingray may disintegrate, compromising much of the wonderful flaky textures of this fish. Well, I do agree that seafood on the whole requires very little cooking. But surely a tad more time on the stove is required for the flavours of the sauce to thoroughly permeate into the flesh. This can be achieved by bringing the flame down until the gravy barely simmering and letting the chunks of stingray sit in the hot bath of flavours for 20 minutes or so. That said, care has to be taken to make sure that the fish does not overcook.

The final quirk lies in the use of daun kunyit, i.e tumeric leaves. While being customarily used in rendang recipes all the time, daun kunyit is usually added together with the rest of the ingredients for stewing. But in this recipe, it is added right at the end, just moments before finishing off actually. The brief encounter between the sliced tumeric leaves and heat just allows the greens to wilt, thus releasing their herby aromas unto the fish. Unlike in traditional rendang recipes where the prolonged cooking process transforms the flavours of the leaves, mellowing and blending it into the complex cocktail of flavours from the other ingredients, much of the robustness and astringency of fresh tumeric leaves is still very apparent in this dish. As such, the tumeric leaves assumes a somewhat ulam-like role, adding on another dimension of flavours to the dish. 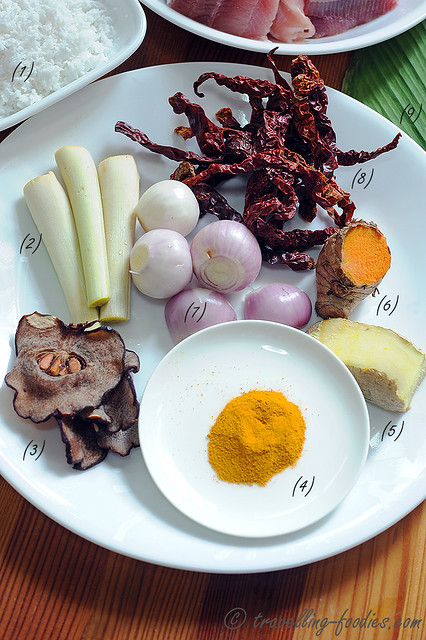 NOTE: Use (4) powdered tumeric only when (6) fresh tumeric root is not available. 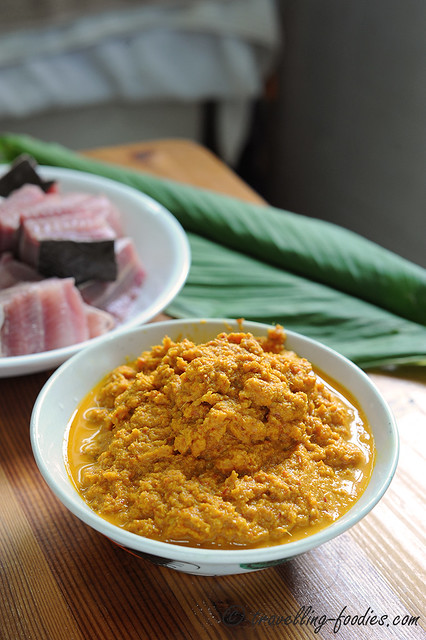 Blend or pound all the rempah ingredients into a fine paste. Add some water if necessary to help with the blending.

To a heated wok, add rempah and dry fry until most of the water/juices has evaporated. Add oil and continue to saute until fragrant.

Add coconut milk, water and asam gelugor slices and bring to a boil before simmering until sauce is reduced to half of its original quantity.

Add stingray chunks, salt and sugar to the thickened gravy and continue to simmer under very low heat until fish is cooked (about 15-20 min) with lid on. Stir once in a while to ensure that the stingray is evenly coated with sauce and check the texture of the fish to make sure it does not overcook.

Add sliced tumeric leaf and toss until everything is just combined and the leaves wilt slightly.

I am submitting this post to Malaysian Food Fest Perak month hosted by WendyinKK of Table for Two….or more